Deliverance, which James Dickey adapted from his own best-selling novel, is one of those rare films that resonates like a literary work but that —rarer still—avoids either being or sounding literary. 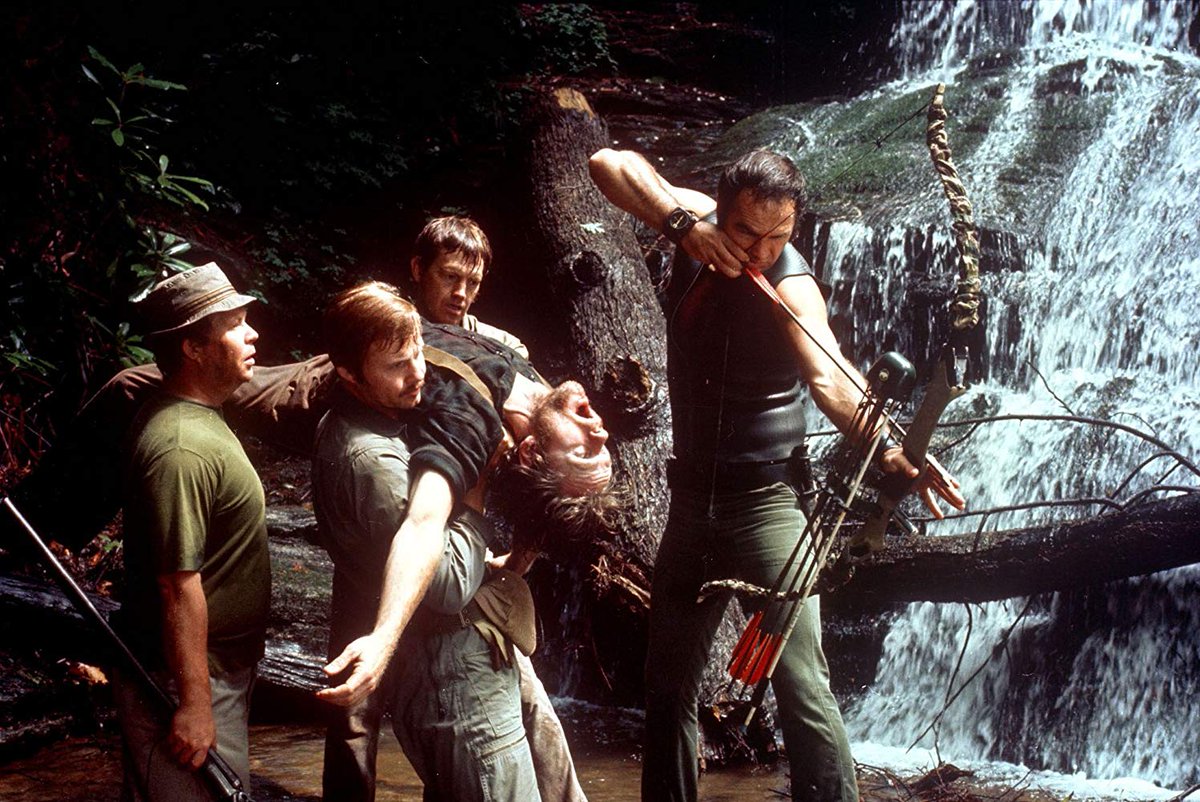 Deliverance, which James Dickey adapted from his own best-selling novel, is one of those rare films that resonates like a literary work but that —rarer still—avoids either being or sounding literary. For me a good book is one that does more than simply tell an arresting story; it creates characters who face moments of crisis and moral dilemma in which they must make choices. And the choices are not necessarily simple, obvious ones between wrong and right, good and evil. Life is generally far more complicated than that, and the novelist, reflecting life, must work these complexities into his design. When he does—as Dickey surely did in Deliverance—one is haunted long after the final chapter by what has happened to the characters as the result of a decision made under duress, what their lives might have been had the decision been different.

Similarly, a good film for me is one that doesn’t end with final titles. Too many pictures are designed merely to amuse or entertain for an hour and a half or so, then send you home unmoved, uninvolved, and unsatisfied. But there are other films that cling to the mind and somehow keep growing and expanding until the imagination itself supplies entire scenes that the filmmaker merely hinted at. I suspect that Deliverance will prove to be such a film.

For one thing, the film is beautifully made. Director John Boorman, working in the remote, thickly wooded mountain country of northern Georgia— just as he did with Alcatraz in Point Blank and with that South Seas island in Hell in the Pacific—succeeds in plunging us promptly and deeply into an alien culture, an alien world. More so, I should say, in Deliverance than in any of his previous pictures. Even before the opening titles have cleared the screen, while we are still watching two cars, canoes atop, penetrating unpaved mountain roads through dark, forbidding forests, the film starts to take effect. Although we have not yet seen the occupants of the cars, we half-hear their conversations and gather that they have driven up from the city for a weekend of canoeing and camping in a wilderness that is about to be tamed. The bulldozers are already at work, readying ground for a dam that will transform this forest primeval into a placid lake.

What follows is perhaps the most extraordinary scene in American films of recent years. The cars pull up before an ancient shanty. The city men need drivers to deliver their cars to them downstream. They peek in the windows and see only a ravaged hag and a child dying of malnutrition. Another child, almost catatonic, sits vacantly in a swing on a collapsing porch. While a simpleton gasses up their cars, one of the city men strikes a few notes on his guitar. The child on the porch responds on his banjo. A few more notes, another response. In no time the two are challenging each other with bits of music. It is a contest that the child—empty-eyed, toothlessly grinning—wins easily. And immediately he returns to his catatonic state.

It is completely a movie moment, emphasizing at once the connections between the city people and the mountain people but, more especially, the gulf that separates them. Boorman again utilizes this moment when, as the men from the city paddle their canoes downstream, they pass under a wooden footbridge. The boy is watching them, and his vacant, impersonal stare creates a chill foreboding of the horror to come. The mountain men and the city men live in worlds apart.

Much of the film is sheer action. There are three canoe runs through the churning white waters of the Chattooga River, each with its own perils. With bow and arrow the men shoot fish, deer—and other men. And when they do so. Deliverance is suddenly transformed from a superior adventure movie into a picture that poses deep moral problems for each of its principals. Two of the city men, Jon Voight and Ned Beatty, have pulled their canoe ashore in advance of the others. Out of the silence of the forest two mountain men emerge and take them prisoners. The mountaineers torture one city man. bugger the other. The second canoe silently arrives, and Burt Reynolds, quickly assessing the situation, kills one of the mountaineers with an arrow. The other flees into the wilderness. Now what will these four civilized men do with the body? If they bring it downstream, what kind of justice will they receive from these closely knit mountain folk? On the other hand, the whole area will become a lake in a week or two, and, if they buried the dead man, who would know?

The journey downstream proceeds through another stretch of white water, and the guitar player (Ronny Cox) tumbles out of the canoe. Was he shot by the mountaineer who escaped? Voight assumes that the party is being shadowed and climbs a sharp precipice to bring down their pursuer. Lying in ambush he lets fly an arrow’ at a man holding a rifle. When he comes upon the body, however, he is unable to make the identification for certain. He may have killed an innocent man.

Deliverance doesn’t attempt to answer questions. The rights or wrongs of what the city people did with the first mountaineer, the guilt or innocence of the second dead man, are left unresolved. As in the novel, the film bores in on the effects of these events upon the men involved. And it is this unresolved, open-ended quality that leaves the viewer haunted and unresolved in his own mind. What would I have done if I had been there?

To make all of this unremittingly persuasive, Boorman took his small, carefully selected cast into the actual locations of Dickey’s horror tale and shot in complete continuity. Whatever the extra costs—in human suffering as well as money—it was worth it. Reynolds registers as he never has before as the headstrong, self-assured organizer of the expedition; Voight effec­tively underplays as his mild-mannered, pipe-smoking friend who enjoys an occasional taste of the wilds. The camerawork, by Vilmos Zsigmond, is im­peccable, and the score—banjo and guitar—is mercifully minimal. Dickey encounters some difficulty in unraveling the several skeins of his story in the final reel, but no matter. Everything that has gone before is so powerful, so right, that any attempt at a neat solution could cause only resentment. After the fade-out, the mind takes over. Which is as it should be.