ORIANA FALLACI AND THE ART OF THE INTERVIEW 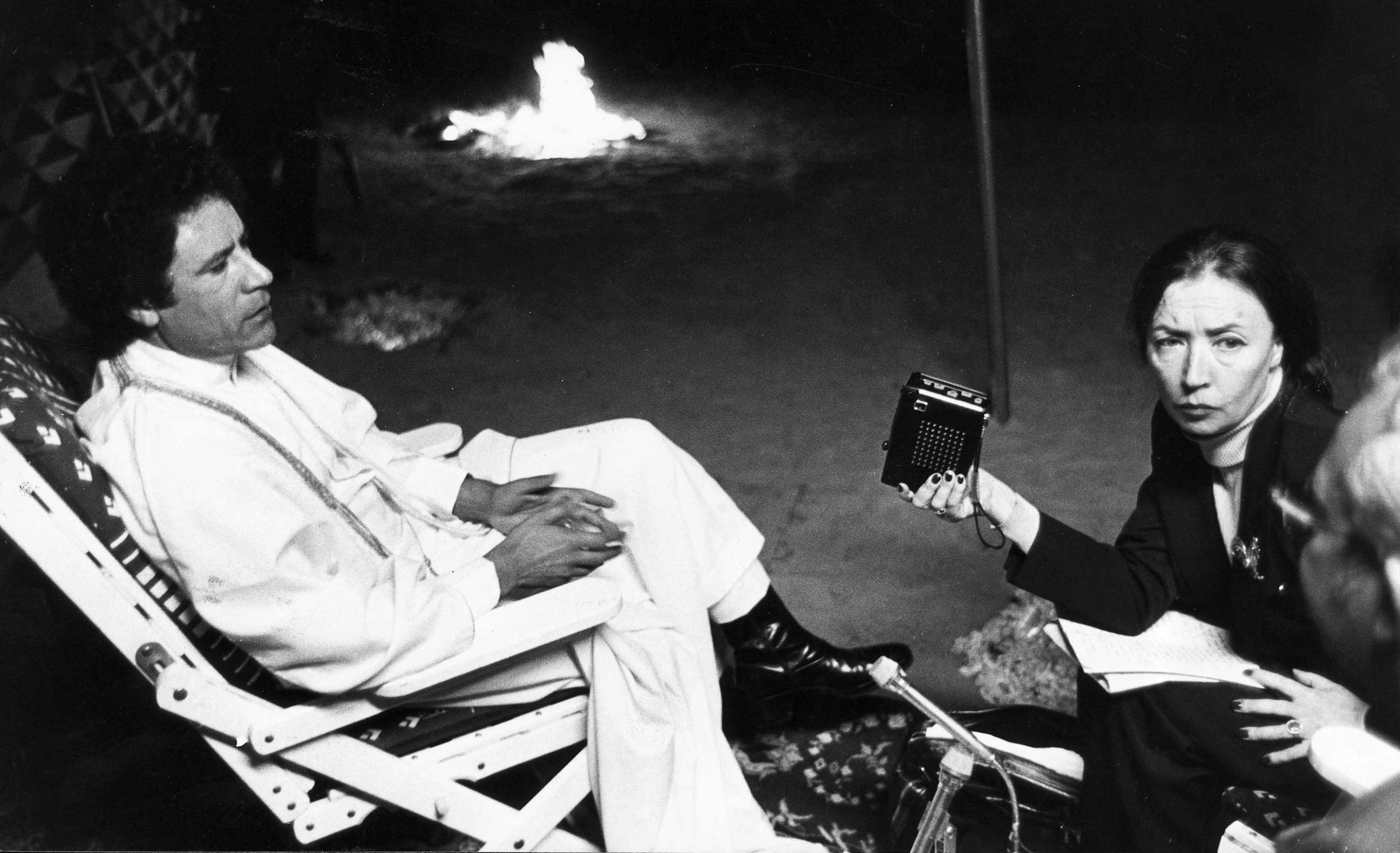 Oriana Fallaci’s interrogations of leaders such as Kissinger and Qaddafi make today’s big-name interviewers look like powder puffs. Wondering when the questions got so soft, the author recounts his last visit with the tempestuous Italian journalist, who died in September, and her last—never published—scoop, a sit-down with the Pope.

Here is an excerpt from an interview with what our media culture calls a “world leader”:

And here is another interview with another “world leader”:

Oriana Fallaci: When I try to talk about you, here in Tehran, people lock themselves in a fearful silence. They don’t even dare pronounce your name, Majesty. Why is that?
The Shah: Out of an excess of respect, I suppose.
Fallaci: I’d like to ask you: if I were an Iranian instead of an Italian, and lived here and thought as I do and wrote as I do, I mean if I were to criticize you, would you throw me in jail?
The Shah: Probably.

The difference here is not just in the quality of the answers given by the two homicidal dictators. It is in the quality of the questions. Mr. Rather (who is in mid-interview in one of Saddam’s palaces and who already knows that his subject doesn’t speak English and uses only his own interpreters) begins to ask a question, half apologizes for doing so, and is then completely unhorsed by an irrelevant remark about coffee. It’s unclear whether he ever returned to the question that he hoped would be taken in the spirit in which it was asked, so we will never know what that “spirit” was. And at no point in the interview, which was in February 2003, did Rather ask Saddam Hussein about his somewhat, shall we say, spotty record on human rights. It was enough that he had secured what the networks call “the big get.” After that, the interviewee could spout all the boilerplate he liked, and CBS would hold the megaphone by which this was transmitted to the world:

Rather: Are you afraid of being killed or captured?
Hussein: Whatever Allah decides. We are believers. We believe in what he decides. There is no value for any life without imam, without faith. The believer still believes that what God decides is acceptable. . . . Nothing is going to change the will of God.
Rather: But don’t my research notes say that you are a secularist?

Actually, I made up that last question. Dan Rather just sat through the preceding answer and went on to the next question on his list, which was about Osama bin Laden. Perhaps there was someone telling him to move things along a bit. At least he never began a question by asking, “Mr. President, how does it feel . . . ”
Whereas when the supposedly secular Shah also began speaking as if the opposite were the case, burbling about his deep religious faith and his personal encounters—“not in a dream, in reality”—with the Prophet Ali, Oriana Fallaci was openly skeptical:

Fallaci: Majesty, I don’t understand you at all. We had got off to such a good start, and instead now . . . this business of visions, of apparitions.

(Subsequently she asked His Imperial Majesty—no doubt with a wary eye on the exit—“Did you have these visions only as a child, or have you also had them later as an adult?”)
With Oriana Fallaci’s demise at seventy-seven from a host of cancers, in September, in her beloved Florence, there also died something of the art of the interview. Her absolutely heroic period was that of the 1970s, probably the last chance we had of staving off the complete triumph of celebrity culture. Throughout that decade, she scoured the globe, badgering the famous and the powerful and the self-important until they agreed to talk with her, and then reducing them to human scale. Facing Colonel Qaddafi in Libya, she bluntly asked him, “Do you know you are so unloved and unliked?” And she didn’t spare figures who enjoyed more general approval, either. As a warm-up with Lech Wałęsa, she put Poland’s leading anti-Communist at his ease by inquiring, “Has anyone ever told you that you resemble Stalin? I mean physically. Yes, same nose, same profile, same features, same mustache. And same height, I believe, same size.” Henry Kissinger, then at the apogee of his near-hypnotic control over the media, described his encounter with her as the most disastrous conversation he had ever had. It’s easy to see why. This well-cushioned man who had always been the client of powerful patrons ascribed his success to the following:

The main point arises from the fact that I’ve always acted alone. Americans like that immensely.
Americans like the cowboy who leads the wagon train by riding ahead alone on his horse, the cowboy who rides all alone into the town, the village, with his horse and nothing else. Maybe even without a pistol, since he doesn’t shoot. He acts, that’s all, by being in the right place at the right time. In short, a Western. . . . This amazing, romantic character suits me precisely because to be alone has always been part of my style or, if you like, my technique.

In the following essay, Santo L. Arico examines the techniques that he believes make Oriana Fallaci an effective and engaging interviewer.

What makes the female so much deadlier than the male? With assists from Fran Lebowitz, Nora Ephron, and a recent Stanford-medical-school study, Christopher Hitchens investigates the reasons for the humor gap

THE “OTHER” L-WORD – by Christopher Hitchens