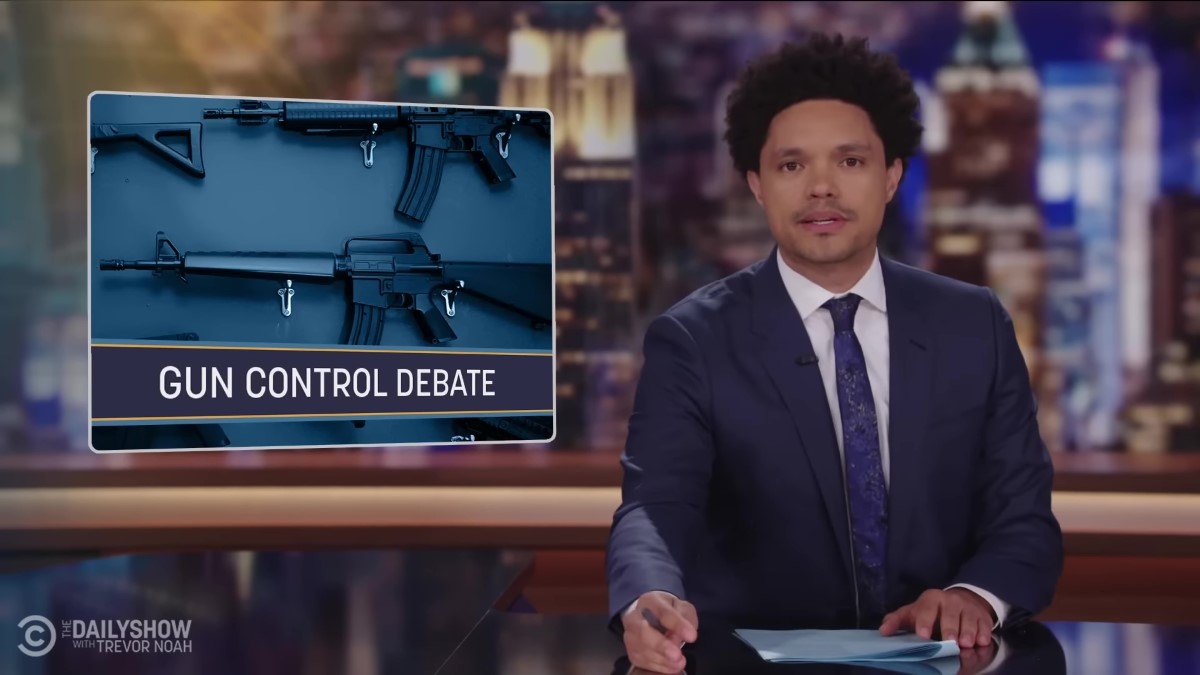 There’s no denying that there is a lot going on in the world right now. For instance, Russia is still invading Ukraine. And, in response, the European Union has just announced that they will be banning almost all Russian oil imports, which is– if successful, is basically gonna turn Russia’s currency into the TikTok crying filter all the time.

And if this wasn’t enough for Europe to be dealing with, there’s also a growing outbreak of monkeypox. Yes. A disease that’s killing off everyone’s NFTs. So, please, everyone, vaccinate your monkey. Remember.

And, by the way, they’re actually saying that it’s being spread mostly through sex. Yeah. So at least now, when you show up to the doctor with monkeypox, your doctor can be like, “My man.”

Oh, and, on top of all of that, someone threw a cake at the Mona Lisa. Yes. Which apparently was to protest climate change. Yeah, it sounded weird, but, uh, apparently most people don’t know this about the Mona Lisa, but if you widen out on that picture of her, she’s actually driving a Hummer. Not cool. That’s where the picture’s from.

So, yeah, there-there’s so much happening. So much happening in the world. But America can’t focus on any of that stuff. Because, once again, America is reeling from mass shootings. All the way from Buffalo, New York, to Uvalde, Texas, people are asking, how long can this keep going on? And here’s the good news– in response, a major bill has been announced which would ban the new sales of handguns and allow the government to forcefully buy back assault rifles. In Canada. Yeah, this is completely real. Canada saw what happened here, and they’re shutting down guns there. Yeah. At this point, America is basically a Scared Straight program that gets other countries on the right path. Yeah. It’s, like, you ever smelled someone so bad, you know, that you decide that you need to take a shower? That’s what America is with gun laws now to other countries. They’re like… (sniffing) “We need to do something about guns.”

And while most Americans– liberals and conservatives– are open to common-sense restrictions on guns to keep Americans safe, there is still a small yet powerful group of gun (bleep) who believe the problem with gun violence is not because of guns. No, it’s because of everything else.

Part of the problem is how this generation of kids exists mostly online. They see actual violence, as is portrayed in the movies they watch, the music they listen to and the games… the video games they play. When I played war growing up with my friends, the boys were allowed to be boys. I said to my friend Andy, “Bang. You’re dead.” But the difference is, we knew it was fake. And Andy got up afterwards. And we went and jumped in the fire hydrant or whoever had a pool.

First of all, why do I feel like Andy’s fake? And second of all, what is this loser talking about? Kids know that games are fake, my man. No one is turning off Grand Theft Auto like, “Shit! I just ran over 80 pedestrians. “Should I get a lawyer? “Oh, my God, I’m too young for jail! What am I gonna do?”

The argument that American music and video games causes gun violence totally falls apart when you realize the entire world listens to American music and plays American video games. Yeah, but they have nowhere the same level of America’s mass shootings. And don’t get it twisted. It’s the same music. It’s not like in Sweden, there, Snoop Dogg is like…

It’s the same music. Why are they not getting the same results?

And please, please, please. Gun fanatics— they-they don’t just want to ban video games and music. No, no, no. It’s going further. They also want to replace those things with what they say are some lost values.

The only solution is Christ Jesus and being able to get some type of spirituality and prayer back into our schools. Right now, today, we live in a country where our millennials’ participation rate for church is under 30% in a lot of locations. This is the lowest church participation we’ve ever had as a nation. Uh, and, so, it just shows you why you see so much chaos in our streets.

Yeah, I mean, that could be one solution. We need to bring Jesus into our schools. I mean, I don’t know how Jesus would feel about that. Yeah, because if I was Jesus, I’d be like, “Yo, forget that. Look at what you guys did to me with nails. “I’m not coming back when there’s guns, like AR-15s. Shit. I learned my lesson.”

But again, if you think gun violence in America is high because people aren’t going to church, then why don’t they have the same gun violence in Europe? Because there, nobody goes to church. It’s like a thing that’s done now. If you go to church in Germany, you’ll be the only one there. Even the preacher will be like, “Aah! “Oh, geez, you scared me the shit out of me. “Nobody comes in here anymore. “I even forget there was a door. Oh. Oh. Oh, my God, that was crazy. Oh.”

The point is gun lovers have been blaming the same causes over and over again for decades, although, this time, to their credit, they’ve come up with a new thing to blame. It’s not the guns, it’s the books.

We stopped teaching values in so many of our schools. Now-now we’re teaching wokeness, we’re t– we’re indoctrinating our children with things like CRT.

Yeah, that’s right. That’s how evil critical race theory is– it’s only been around for, like, a year, and it’s already caused three decades of school shootings. It’s really tough. It goes back in time. It’s so powerful. Look, man, I know you guys want to blame anything but guns, but it still has to make sense. Can we agree on that? Right? You can’t just blame stuff that you are already mad at. These guys are like, “Maybe there wouldn’t be “so many, uh, you know, violent shootings in schools “if my wife would stop flirting with the landscaper. I mean… is it just me?”

They’re making it sound like there used to be a lesson that was about the importance of not shooting people, but they never got to it because they spent too long on teaching slavery. This doesn’t make any sense. And if it’s not religion and if it’s not video games and it’s not the music, what else could it be? Well, according to some gun lovers, maybe it was the school’s fault.

One of the things that-that everyone agree is don’t have all of these unlocked back doors. Have one door into and out of the school. I would like to see this– a national push toward instead of parent buying their kids all these tools and toys and games, invest in the classroom to make it safer. They have blankets that you can put up on the wall that are colorful and beautiful, but they’re ballistic blankets.

We need to install man traps. A series of interlocking doors at the school entrance that are triggered by a trip wire. The trip wire can be a gunshot, broken glass, a manual switch tossed by a school employee, and it traps the shooter like a rat.

Are these people hearing themselves? You think kids can’t tell fantasy from reality, but your suggestion is like, “How about we make a school “with steel doors that slam and windows that turn into concrete “or, even better, the whole school becomes a Transformer. “Yeah, so that way, when the school shooter comes, the whole school can run away from it.”

Not to mention, have you guys ever been in a school? Huh? You realize the fire alarm gets pulled as a prank, like, once a week. You think the jocks aren’t gonna be constantly tossing nerds into the man trap?

Do you listen to yourselves? And even if those ideas don’t work, even if they don’t, there’s one solution that conservatives love to come back to time and time again, and over the weekend it was proposed yet again by none other than Donald Jarhead Trump.

What we need now is a top-to-bottom security overhaul at schools all across our country. And above all, from this day forward, every school in America should have a police officer or an armed resource officer on duty at all times.

Yeah. Yeah. You know, you always hear people saying this after a school shooting. What we need is armed police officers in the school. What’s amazing about the debate this time is that they’re still saying it even though in the shooting that just happened, there was an armed police officer, and it didn’t help. Yeah, classic Trump. Proposing a solution after it already failed.

I mean, he would have been a lot of fun in the lifeboats after the Titanic. “Next time, we should just ram that iceberg really hard. “What’s the worst that could happen? What do you think, Jack? What do you think?”

And as we’ve all heard by now, there wasn’t just an armed resource officer on the scene. There was a whole platoon of police officers who responded to the shooting but didn’t do shit to stop it while it was still going on. Yeah, and I’m willing to guess it’s because they were all so shit-scared of a gunman armed with an AR-15. I feel like that’s what we have to ask ourselves. As a society, do we want to live in a world where anyone can legally buy weapons that the police are scared of? Huh?

And just by the way, just by the way, for me, it’s been amazing to see how some people love guns so much that they’ve gone from “Blue Lives Matter” to “Screw these bitch-ass cops. “If they’re not here to get shot, “then what’s the point of having them around? F*ck the police.” Oh, now you don’t care about the cops’ lives? Like, I don’t know. Maybe it’s just me. I would rather, say, get rid of the AR-15s and make these officers’ jobs a lot more safe. Maybe it’s just me.

It’s why a lot of people flip. You just flip whenever you feel like it. It’s also crazy how the cops, they can do anything. Right? They shoot people because they think they have a gun. And then now they’re like… They know it’s a gun. They’re like, “Well, can’t shoot them.”

So, look, I know that America’s never going to do what Canada is doing. I don’t even expect that. Right? There’s a gun culture in this country that is far too engrained to ever truly get rid of it. And I also know that we’re not gonna stop gun violence altogether. I’m not naïve. But I would hope, I would just hope that after a tragedy like this, Americans could agree that losing some of these is worth it to prevent losing more of these. 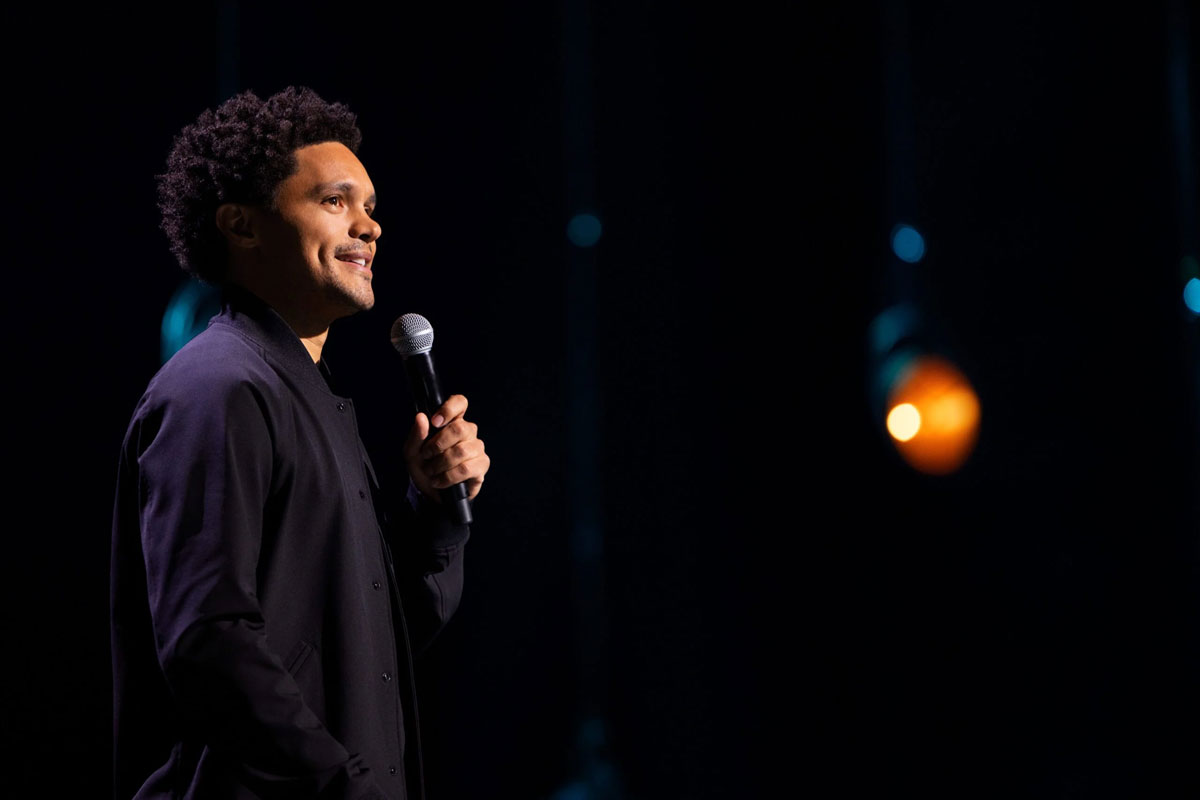 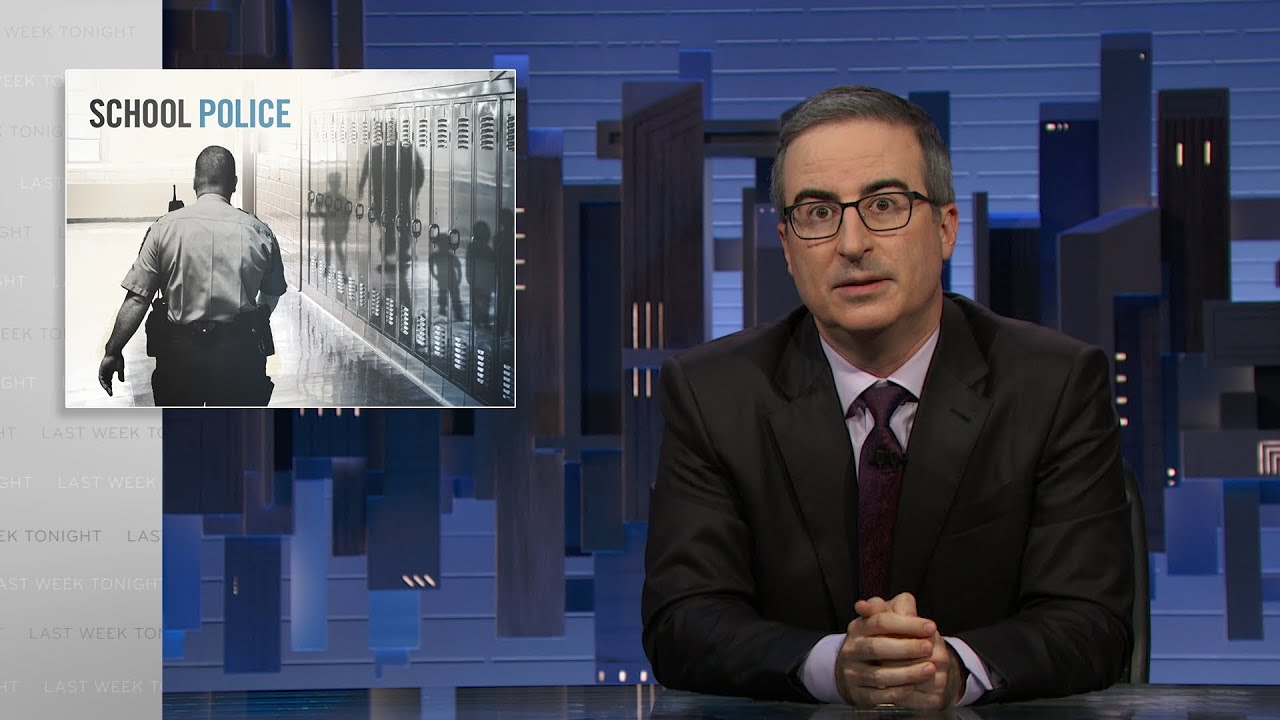 In the wake of the mass shooting in Uvalde, John Oliver discusses the push for more police in schools and whether they are the answer to our school safety issues, or a new problem altogether. 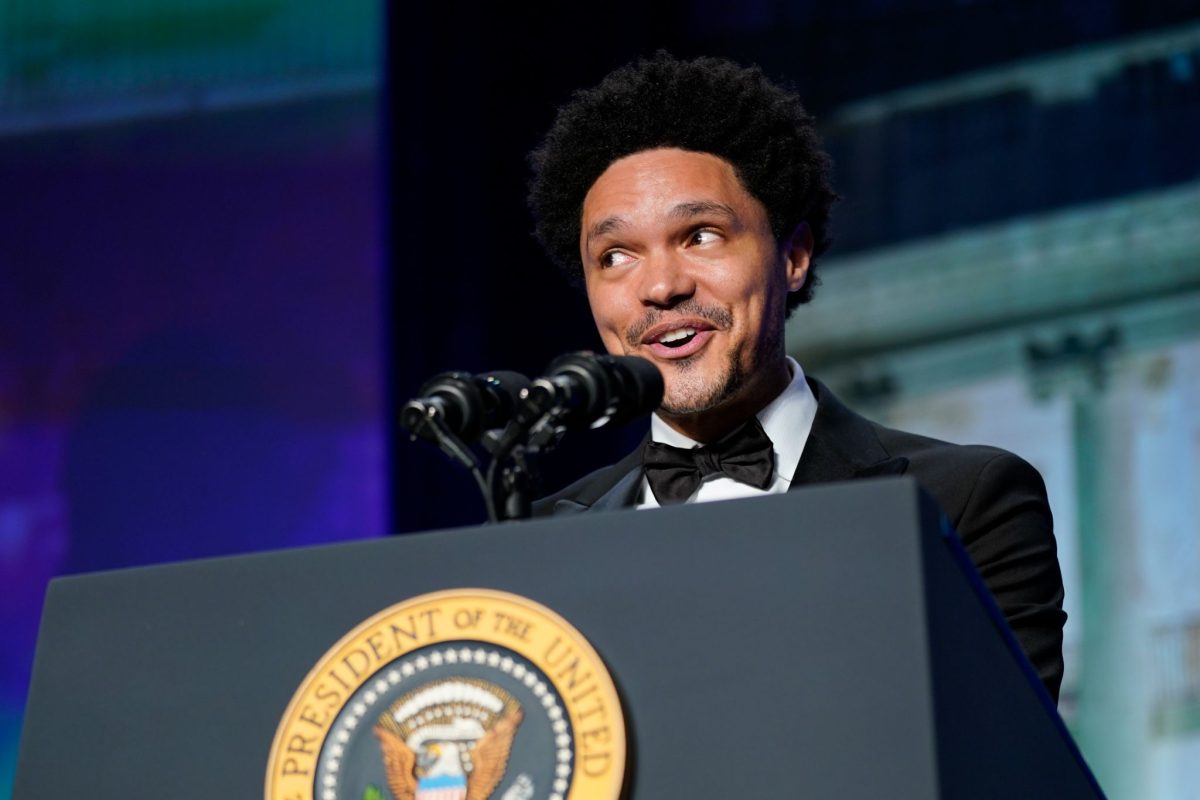 Trevor Noah headlined the annual White House Correspondents’ Association dinner on April 30 after a two-year pause due to the pandemic.