This study will point out how Dr. Strangelove is a sex allegory: from foreplay to explosion in the mechanized world. 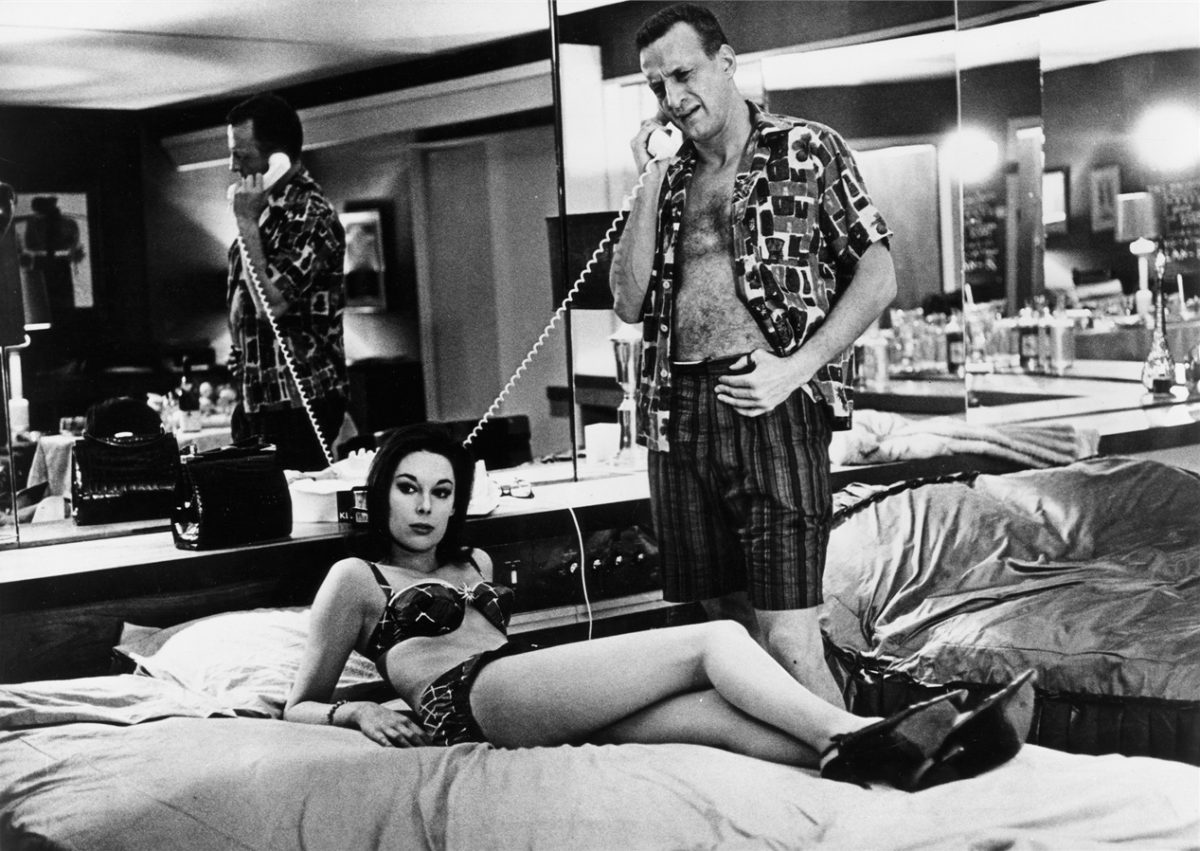 The most provocative commercial motion picture produced in the United States in 1964 was Stanley Kubrick‘s Dr. Strangelove or: How I Learned to Stop Worrying and Love the Bomb. Much has been made of the question of whether or not the film is a satire. Stanley Kauffmann says Dr. Strangelove is not satire — it “does not hope to alter men;” he suggests that it is beautiful black comedy. On the other side, Dwight Macdonald says the film is a “barrage of satire,” and John Simon also categorizes it as satire. Simon says that Dr. Strangelove is for something — “it is for humanity.” Kubrick has stated that he would like to see the most prominence given to the review written by Robert Brustein in the New York Review of Books; Brustein interpreted the effect of the film as purgation.

In all of the varied critical opinion, much has been said about the purposes of Dr. Strangelove, but a dominant theme that pervades the film from beginning to end has been ignored. This study will point out how Dr. Strangelove is a sex allegory: from foreplay to explosion in the mechanized world.

The picture opens with two planes refueling in the sky in great metal coitus as the sound track croons Try A Little Tenderness. The film ends with the mushroom clouds of orgiastic world destruction as the track croons, We’ll Meet Again. The purgation is thorough and devastating.

When Kubrick began to adapt Peter George’s serious novel Red Alert, into a cutting continuity (pun intended), it is said that several scenes became ludicrous; they had a note of natural humor in them. Kubrick tilted his focus and orchestrated these notes into an outrageously comic film on an outrageously serious subject. Part of the comic effect is in the names of the characters. Peter Sellers plays three of these characters — President Muffley, Captain Mandrake, and Dr. Strangelove.

Like Jonathan Swift, who employed Master Bates in Gulliver’s Travels, the creators of Dr. Strangelove (Peter George and Terry Southern assisted Kubrick) gave special significance to names that represent various aspects of sex. General Jack D. Ripper (Sterling Hayden), commander of Burpelson Air Force Base, initiates the attack on the Soviet Union. General Ripper, a sex fiend in his own way, is obsessed by the idea of “bodily fluids” and what is happening to them; he is certain that fluoridation is a Commie plot to destroy the strength of America by undermining her bodily fluids. Ripper’s description of the act of love has been described by one woman I know as the sexiest moment in any movie she has seen.

Ripper possesses two objects that are obvious sex symbols. The first is his cigar, which is a dominant fixture. Secondly, there is his pistol. When the President discovers Ripper’s attack plan, he orders Ripper’s capture. Only Ripper’s code can halt the planes heading toward the U.S.S.R. As the army tries to unseat him, Ripper barricades himself in with the unwilling Captain Mandrake, a British exchange officer. While the enemy fights toward him, Ripper enters the bathroom and commits suicide with his pistol. (See Seymour Glass’s suicide in J. D. Salinger’s Perfect Day for Bananafish for an interesting parallel).

General Buck Turgidson (George C. Scott) is also sexually oriented. When the phone call informing him about the attack comes, he is in a bedroom with his secretary. Again, the name has an extra value. Buck, of course, means male with various connotations, and turgid means swollen. Turgidson rushes to the War Room where he cheers his planes on.

After Ripper’s suicide, Captain Mandrake tries to get information about the code to the President. The mandrake root resembles the male shape; this gives us a third character with a significant name. Mandrake runs into trouble in the person of Colonel “Bat” Guano (Kennan Wynn), who breaks in on Mandrake as he has worked out the code. In continuing our name pattern we find that guano is manure, particularly that of bats, and is used as fertilizer. Guano holds Mandrake prisoner at gunpoint, but Mandrake finally convinces Guano to allow him to make his call to the President. Still, Guano is uncertain and warns him about any “preversions” in the phone booth. Mandrake is stymied because he doesn’t have a coin with which to place the call, and the operator won’t heed his pleas without a coin. Finally, Mandrake gets Guano to shoot a cola machine to get the money. The whole scene is reminiscent of Rabbit’s golf game (impotence) in John Updike’s novel, Rabbit, Run.

Meanwhile, the womb-like War Room is the scene of other action. The President, Merkin Muffley, is trying to reach Premier Dmitri Kissoff in Moscow to tell him what is happening. Stanley Kauffmann, in his review in the New Republic has called attention to the President’s name with the words “erotica students, observe.” Merkin means female pudendum (Oxford English Dictionary), which shows the feminity of the President, illustrated by his lack of action. Premier Dmitri is off somewhere with female companionship. Eventually, Muffley gets through and gives Kissoff the news. Although Mandrake relays the code and Kissoff is warned, it is too late. One of the planes has been hit by shell fire, and its code system has been destroyed. The crippled plane is another phallic symbol as it flies on to its destination. As it reaches its target, Major King Kong (Slim Pickens), a Texas ape, mounts the bomb to try to dislodge it from where it is stuck in the plane. He succeeds and rides the bomb down to its climax with an ecstatic yowl.

Meanwhile, back at the War Room, Dr. Strangelove — and this name captures the essence of the film — has made his appearance. The Soviet ambassador reveals that the Soviets have created a Doomsday Machine, an invention that they were preparing to announce. Strangelove verifies the possibility of such a machine. His answer to the problem of nuclear annihilation is for a few man to go under ground. He proposes, with an excited leer, the provision of many women for each man.

The Doomsday Machine, when set off by a bomb, will destroy civilization; but man can come up again after ninety-three years when the radioactivity has lifted.

Strangelove is in a wheel chair, impotent. He is a product of German science, talking in a measured, clipped accent; he is mechanized, his arm snapping at his throat and his crotch in an uncontrollable attack. He is the end result of science. In his final act, his parts take over; and his mechanical arm throws him from the chair. He totters and announces shrilly, “Mein Fuhrer! I can walk.” And the bomb explodes.

The film concludes with a panorama of beautiful mushroom clouds destroying the world, as Vera Lynn sweetly sings We’ll Meet Again. Impotence is no more. Warped sex has been eased. Civilization can go back to its beginnings. Dr. Strangelove or: How I Learned to Stop Worrying and Love the Bomb ends in an orgiastic purgation. Kauffmann says, “This film says . . .’The real Doomsday Machine is men.'” Actually, the real Doomsday Machine is sex. As King Kong, Buck Turgidson, and Dr. Strangelove himself would chorus, “What a Way to Go!” Love that bomb.