Night and the City | Review by David Denby

Night and the City is based on a Jules Dassin B-movie from 1950 (same title), but its true spiritual antecedent, I suspect, is Sweet Smell of Success, the wonderfully ambivalent melodrama about the pleasures and corruptions of New York night-life in the late fifties, starring Tony Curtis and Burt Lancaster. 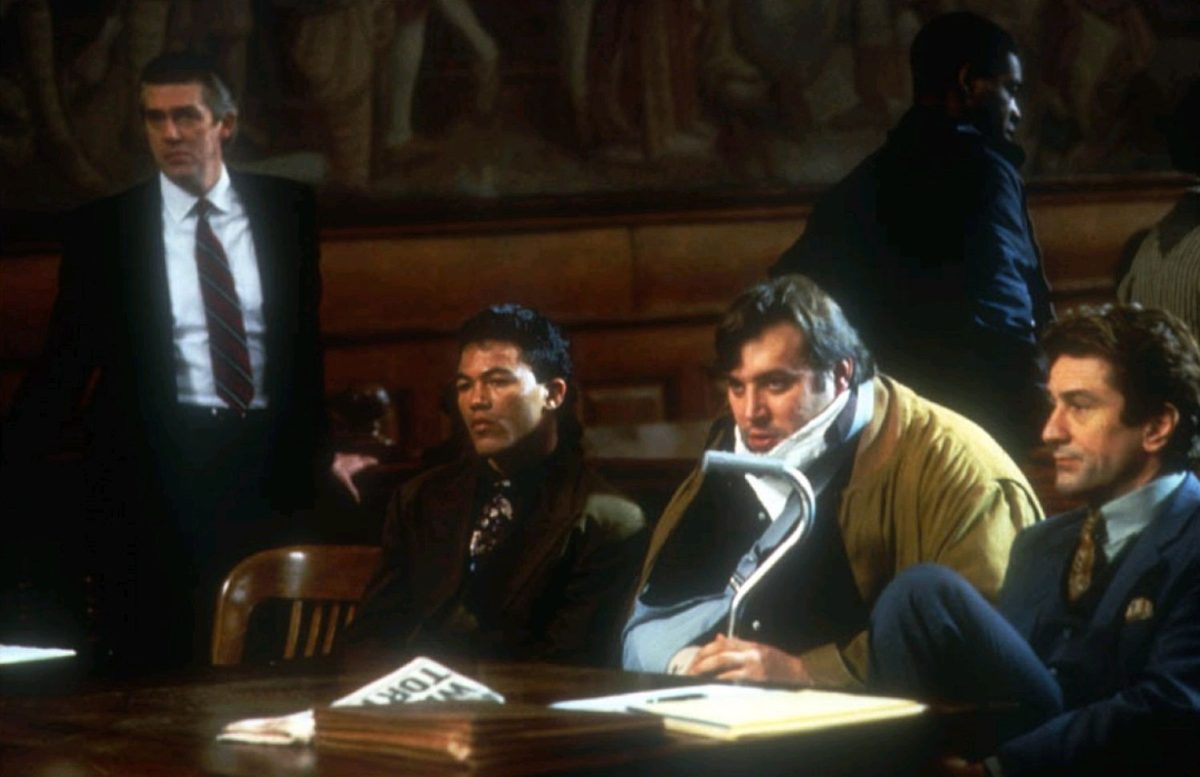 In Night and the City, Irwin Winkler and Richard Price’s feverish love lyric to New York, there is a nun, or perhaps I should say a “nun”—a hustler in a habit—who goes about collecting alms for “the children.” This operator makes the mistake of entering Boxers, a Village pub whose inhabitants know all about hustlers. The owner, Phil (Cliff Gorman), takes one look, utters an indelicate word derived from the female anatomy, and pitches the scam artist through the front door.

At which point the nun collects her dignity and her alms box and moves off. A few scenes later, she can be seen just down the block, again beseeching people to give her money for the children. In other words: Go ply your trade—just don’t do it in my shop.

No doubt Mr. Michael Medved, the eminent movie critic of PBS who makes a habit—oops, a practice—of counting up slighting references to God, country, and family in the media, will mark down this scene as yet another example of the vicious anti-clerical animus that is destroying American movies. It is, of course, nothing of the sort. But in any case, I would not expect Medved to understand the scene.

The movie’s attitudes, in fact, may be fairly incomprehensible to people outside New York. Everyone in Night and the City is hustling for a little piece of the action. People make deals, arrange bribes and crooked loans, and double-cross one another, yet they all accept their dishonest milieu as the best patch of Heaven on this earth. In the New York of Night and the City, a fiercely competitive spirit exists side by side with an attitude of live and let live. The movie has the rough but accepting tone of other pictures written by Richard Price: We live in a fallen world; there are no “pure” people, but there are scam artists, dreamers, drunks, and even the occasional man or woman with a good heart.

Night and the City is based on a Jules Dassin B-movie from 1950 (same title), but its true spiritual antecedent, I suspect, is Sweet Smell of Success, the wonderfully ambivalent melodrama about the pleasures and corruptions of New York night-life in the late fifties, starring Tony Curtis and Burt Lancaster. Price writes a stylized barroom patter that rivals Clifford Odets’s succulent overstatement in that picture, and he shares some of Odets’s appreciation of egotistical, power-driven types as well as his love of outsiders clawing their way in. The snapping-at-heels pace of the movie, the petty desperation, the lies, the mad rushing around the streets at night—my God, we’re home! This is one of the great New York movies. The plotting may be synthetic, but Night and the City has so much enthusiasm for its own circumscribed setting that I was carried along by it as I was by few American movies this year.

One of the pleasures of Night and the City is the sight of Robert De Niro finding his soul after a couple of bum outings. Becalmed in Winkler’s Guilty by Suspicion and then hideously over the top in Scorsese’s Cape Fear, De Niro is youthful and likably fluent as Harry Fabian, a nervy, chiseling, ambulance-chasing lawyer who has never attained respectability or self-respect. Harry cannot stop moving; De Niro’s jiggling, dancing, arm-waving performance is frenetic. Yet there’s a sweetness in him that I’ve never noticed before.

Harry practices law as guerrilla warfare: Find a client who has a ridiculous grievance, make a nuisance of yourself, and accept a small payment to go away. A cheapster, yet he takes clients no one else would touch; he tries to help them more than himself. Harry wants not money but perhaps a little respect at Boxers; most of all, he wants to top the most distinguished customer of the pub, Boom Boom Grossman (Alan King), a former boxer who has become a crooked, bullying fight promoter. Harry looks at Boom Boom and a reckless side comes out in him. De Niro gives what could have been a stock role a new twist: His Harry has furtive goodness.

The only one who understands Harry’s innocence is Helen (Jessica Lange), the wife of nasty Phil the bartender. Lange plays a deglamorized, worn-looking woman who has a criminal record and isn’t always very bright, but she plays it with full emotion, and the tender ruefulness of her Helen is overwhelming. In her scenes with De Niro, Lange has to feel for both of them, because Harry is too guilty over the ways he might use Helen to be very demonstrative. Undeterred, Helen seizes on Harry as a way of escaping her coarse and brutal husband. She needs Harry’s finagling assistance to open her own restaurant; in return, she will help him in his crazy scheme to restore neighborhood fight promotions to New York. It’s New York romance: People may use each other and still love.

The shabbiness of the small-time fight scene—the ancient trainers, the ethnic kids walloping each other in a tiny gym—adds to the movie’s poetry of broken dreams. Yet there’s still so much bitter life here that it never becomes depressing. Harry wants to stage fights the old way, before the big-time promoters like Boom Boom took over. He makes an alliance with Boom Boom’s brother, Al, another retired fighter—“the good Grossman” who never exploited the fight game—and Jack Warden, with his rough, red skin and rough voice, brings a rush of feeling into the movie. He and King, whose frowning, heavy face could frighten Joe Louis, have some of the most memorable scenes of the year together.

Winkler, a longtime success as a producer, made his directorial debut last year with the high-minded but muffled Guilty by Suspicion. With remarkable speed, he has learned that righteousness is not the path to art. There isn’t a dull moment in Night and the City. Winkler pursues Harry in and out of buildings and down stairs (there is a terrific tracking shot as Harry descends the steps of the criminal-court building while jabbering at a client). All the minor actors, playing rough New York types, drive the nail in with a single blow. Only at the end, striving for an upbeat finish, do Price and Winkler let go of the reins. They seem to be trying to deny what has been obvious all along—that Harry and Helen are losers, not clever and ruthless enough to make their plans come true. Perhaps they were afraid of running afoul of another New York assumption—that failure is uninstructive. I would amend this to: Mediocrity is uninstructive, but failure in the pursuit of dreams is one of the great subjects.

1 thought on “Night and the City | Review by David Denby”