Laurel and Hardy – by Vincent Canby

During the last ten years or so, movie producers have been ravaging Laurel and Hardy features and shorts for scenes that they have then compiled into anthology features, some more lovingly and intelligently put together (Robert Youngson’s The Golden Age of Comedy and The Further Perils of Laurel and Hardy) than others, especially Jay Ward’s The Crazy World of Laurel and Hardy. 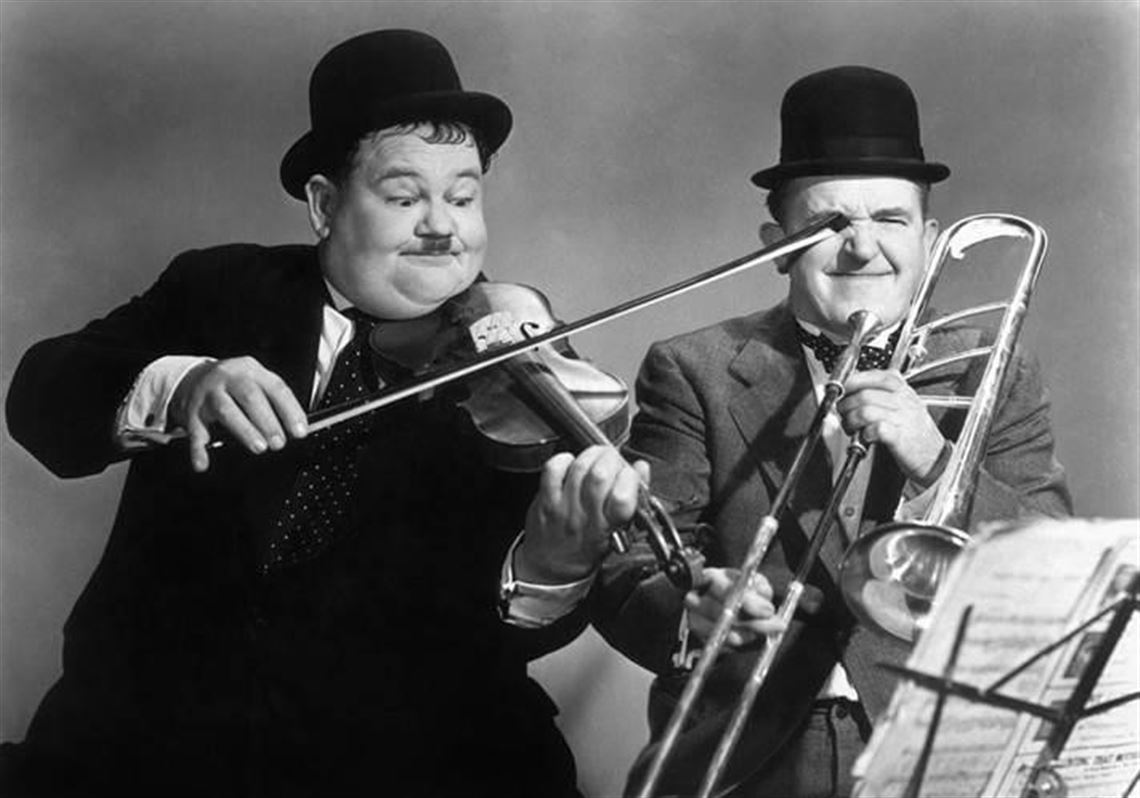 Oliver Hardy, who was fat, superior, and short-tempered (but always the first to ask: “Can’t you take a joke?”), died in 1957. Stan Laurel, the thin one with the George Price face and a gift for Zen (“You can lead a horse to water, but a pencil must be lead”), died in 1965. By that time, to the horror of such clear-eyed movie historians as William K. Everson, the author of The Films of Laurel and Hardy (Citadel Press), the comedy team, which had been most active in the 1930s, was well on its way to becoming the object of the kind of cult worship that is as patronizing as it is faddish. .

During the last ten years or so, movie producers have been ravaging Laurel and Hardy features and shorts for scenes that they have then compiled into anthology features, some more lovingly and intelligently put together (Robert Youngson’s The Golden Age of Comedy and The Further Perils of Laurel and Hardy) than others, especially Jay Ward’s The Crazy World of Laurel and Hardy. Because (in my adult life, anyway) I’ve always liked Laurel and Hardy, without ever being a fanatic, I was disappointed but not really surprised when I saw the Ward compilation for the first time recently. The Crazy World of Laurel and Hardy (1966) is all peaks and no valleys, bits and pieces from too many comedies, climaxes presented without lead-ins, a kind of surreal symphony of immersions, skull fractures, shattered windows, punctured posteriors, and zonk-pow-splat sound effects. Laurel and Hardy seemed as grotesque and brutal now as they seemed when I was a child.

The Hal Roach Studios, under whose auspices all of the team’s best films were made, has corrected that impression with the reissue of what must be one of the most consistently funny Laurel and Hardy features, Way Out West (1937), along with five fine short subjects, The Hoose-Gow (1929), Brats (1930), Hog Wild (1930), Helpmates (1931), and Busy Bodies (1933). The program is so special, so exuberant, that it must be shown for as long as there are people who like to test their nostalgia against the reality of an actual movie experience—and for as long as there are people who simply like to laugh without recourse to analysis. The most obvious virtue of the program is that it presents Laurel and Hardy unedited, complete in their own time and space, rather than excised and juxtaposed in ways that destroy the very conscious, internal rhythms of their gags. (For anyone who wants to pursue that matter more deeply, I’d recommend the University of California Press’s Laurel and Hardy by Charles Barr, who, among other things, discusses the typical Laurel and Hardy “triple gag,” in which gags are set, one within another, like Chinese boxes.)

Way Out West was produced by Laurel, directed by James Horne, who did a number of the team’s short films, and written in part by James Parrott, who directed four of the five shorts in the current reissue program. It’s one of their most economical features, both in running time (65 minutes) and in time elapsed within the film (a day and a night). Its story is atypically a triumph- through-failure (most of their shorts end in either loss or collapse): Stan and Ollie come to Brushwood Gulch to deliver a gold-mine deed to Mary Roberts (Rosina Lawrence), the daughter of a dead prospector-friend. Mickey Finn (James Finlayson), the owner of the bar where Mary works, gulls them into giving the deed to his wife. In their efforts to retrieve the deed, and to free poor Mary from her servitude as barmaid, Stan and Ollie are subjected to all sorts of indignities, most of their own making.

The film includes at least two classic Laurel and Hardy routines. In one, Stan is literally tickled into helplessness by the bar owner’s wife, played by Sharon Lynn, who is billed within the film as “Lola Marcel, the Serio-Comic Entertainer.” In another, Stan and Ollie, trying to sneak onto the second floor of the bar at night, employ a block and tackle and wind up by somehow putting their mule into the bar owner’s apartment. (The tickling routine, which comes off as a kind of cheerful rape, was excised for use in The Crazy World of Laurel and Hardy, where it’s only dimly amusing.) Way Out West also features three of the most charming musical numbers that the comedy team ever did, including a soft shoe, and some harmony (“In the Blue Ridge Mountains of Virginia”) in which Stan lip-syncs everything from bass to contralto, to Ollie’s slow irritation.

All five of the shorts are hilarious, but several are noteworthy for very specific reasons. The Hoose-Gow, in which Stan and Ollie find themselves on . a prison farm (having been arrested in a speakeasy raid), closes with a classic custard-pie confrontation. Instead of custard pies, however, the combat medium is rice, freshly boiled in the radiator of the car that has brought the Governor to the farm on an inspection trip. Helpmates details the total de­struction of Ollie’s house when Stan attempts to help his friend clean it up before Ollie’s wife returns from Chicago. Although Ollie (as he does in all the films) is constantly looking at the audience with knowing resignation each time Stan makes a new blunder, neither Hardy nor Laurel ever makes any real bid for our sympathy. They get it, but they never ask for it—which, I think, is one of the reasons they wear so well. As he was in Helpmates, Ollie is rather unhappily married in Hog Wild, in which Mrs. Hardy forces Ollie to put an aerial on the roof so that she can get Japan on the radio. With Stan’s help, a fifteen- or twenty-minute chore is transformed into complete disaster—for the house (the chimney collapses), for Mrs. Hardy (who gets crowned—or is it “beaned”?—with great chunks of plaster), for Ollie (who falls off the roof repeatedly). The final sequence is an extraordinary ride through Los Angeles streets, with Ollie hanging from a ladder, standing upright in the back of the car, and Stan trying to cope with the driving.

This film, as do most of the others, provides subsidiary joys in its views of Los Angeles, especially Culver City (where the Roach Studios were situated), circa 1930. I doubt that there was much thought given to landscapes when the films were made, but landscapes are very much a part of what we see in the films today. I’m not referring to the trolley cars and flivvers in the backgrounds, but rather to the vistas of the flat, partly developed, semiurban landscapes that you can see from Ollie’s roof in Hog Wild. It’s Los Angeles, all right, but it also looks like the sort of setting in which Fellini’s Guido could afford to build his great, skeletal space-toy in 816. It’s not a place where land values are exactly soaring.

The kind of physical mayhem featured in Laurel and Hardy films (cars sliced in two by buzz saws, cars turned into accordions in head-on accidents, people falling through picture frames, windows, roofs) is not really funny when it is removed from the context of the original films, which provide mad logic for everything that happens. Youngson, by using longer excerpts from individual films, made some quite delightful anthologies, but nothing is as satisfactory as seeing the best of the original films, unaltered and unedited, as is this reissued program from Roach.

Barry Lyndon is a leisurely, serious, witty, inordinately beautiful, premium-length screen adaptation of William Makepeace Thackeray’s first novel, The Memoirs of Barry Lyndon, Esq., published in 1844 and set in the second half of the 18th century.

Barry Lyndon, Stanley Kubrick’s handsome, assured screen adaptation of William Makepeace Thackeray’s first novel, is so long and leisurely, so panoramic in its narrative scope, that it’s as much an environment as it is a conventional film. Its austerity of purpose defines it as a costume movie unlike any other you’ve seen.