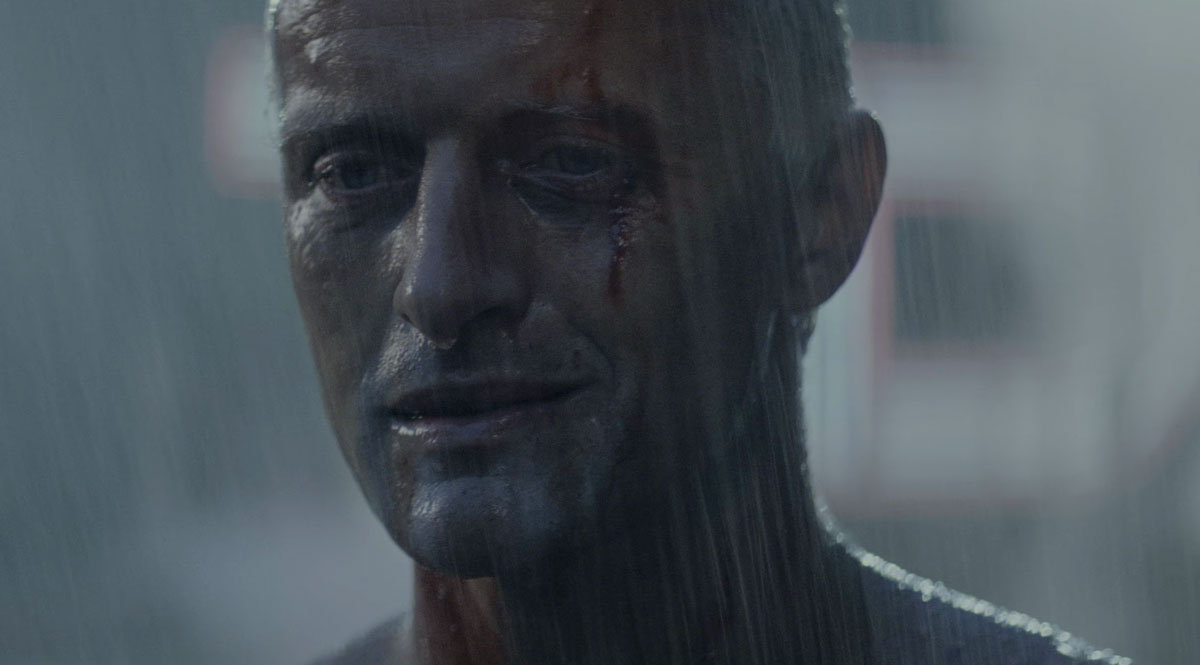 Although it may be weak on the traditional concerns of screenwriting, Blade Runner is loaded with intriguing ideas. Most impressive is the intricately visualized prophecy of a future Los Angeles. Gravity-defying high-rises for the rich, Asians riding bicycles and tending stalls at street-level, Coca-Cola signs on futuristic blimps, giant electronic billboards showing a Japanese woman popping a pill and smiling, pay videophones, and police cars patrolling vertically. Only the weather and the cops seem the same.

More thought was devoted to the world of detail, however, than to the characters who are for the most part thinner than the celluloid on which they appear. Harrison Ford as the hard-boiled cop Deckard goes through a competent facial repertoire—cynical acceptance, fear, disgust, and various unnameable sicknesses of the soul— but he is less interesting than the hunted Nexus 6 “replicants,” rebel androids who killed their way to freedom in the offworld slave colonies.

Since the androids are more advanced physically and mentally—and even better-looking—than humans, they pose a social threat. As a “fall-safe” mechanism, their genetic code has been programmed for a life span of only four years. Seeking a way to prolong their lives, they search out their creator, the technotycoon Tyrell, head of a multiplanetary conglomerate.

“More human than human” Is the motto of the Tyrell Corporation, and this Is where the screenplay both falls and succeeds. It succeeds because the androids are interesting; it fails because the humans are flat stereotypes and grotesques, without any serious purpose, as shallow personally as their empty morality. This overall superficiality is unredeemed by the many interesting twists of characterization, although these twists are often compelling. So we see an unemotional bounty hunter who makes origami figures out of refuse: Tyrell, a capitalist version of Dr. Frankenstein, as concerned with marketing as with playing god; the lonely genetic designer Sebastian, who makes little android toys to keep him company and to look embarrassed for him when he feels shy.

Perhaps the weakness of the human characters helps bring an unexpected poignancy to the real concern of the story, the feelings of the “replicants.” The outcast and persecuted minority rages at injustice like Mary Shelley’s monster, with a sense of self-worth, unfairness and loss that only humans are supposed to possess. Some striking dramatic ideas, worked neatly into the plot, bring out the philosophical questions about personal identity and what is “human.” Leon, who treasures photos of his invented family, kills in a frenzy when his interrogator asks him about his mother. When he and Batty attack Deckard they taunt him, posing questions police interrogators put to androids, asking him how it “feels” to “live” in fear the way androids do. Rachael, implanted with another person’s memories, plays the piano in Deckard‘s apartment and wonders, “Is it me playing?”

The movie’s treatment of these questions becomes more interesting and complex as the rebels approach their fourth year, after which the new emotions and behavior they will develop “on their own” can’t be predicted by their programmers. Here Frankenstein’s monster becomes more human, tragic, and interesting than his creator, as the androids learn to express emotions they are not supposed to feel. Batty, “trained for an offworld kick-murder squad,” pouts like the four-year old he is at the death of his friends. Pris, “your basic pleasure unit,” pleads for Sebastian’s help, a seductive child simpering coyly, “You’re our best and only friend.”

In its sympathy for the androids, Blade Runner takes the approach of Mary Shelley’s Frankenstein more than Philip Dick‘s Do Androids Dream of Electric Sheep?, the novel which served as a starting point for the movie. In Dick’s cold social satire, it is difficult to identify much with either the androids or the humans. Both are stereotyped as the middle class which was despised by the hip, Sixties counterculture. The androids of Blade Runner, however, rebelling against their exploiters and their destiny, suffer more, work harder to be “human,” and are more successful at it than most people are.

Blade Runner‘s androids are complex, not merely the pathetic victims of Dick’s novel. They kill unnecessarily, as well as for survival. When Batty kills his creator, Tyrell, he is a child reunited with his father, wildly turning a kiss into a skull-crushing murder; and the androids’ own deaths combine moments of sad beauty and berserk ugliness. When Batty refuses to kill Deckard at the end, he is not only asserting the value of life over revenge, but breaking out of his programmed role as killer.

The violence is extreme and somewhat hideous, but critics of media violence oversimplify the problem when they call this gore “gratuitous.” One of the more shocking moments is Deckard’s shooting of Pris. She dies kicking and flailing—but this is an ingenious moment expressing contradictions at the core of the story, because she is at once a four-year-old in a tantrum and is also malfunctioning, a machine gone haywire. The human, child-adult, and machine are all protesting their end and calling it murder. In fact, all the bloody deaths and revenges of the androids are startling, though repulsive, reminders of their “humanity.”

Certainly this is exploitation of violence, but it is a simplistic esthetic which says good art can’t be bad politics. Violence is not gratuitous or without artistic purpose just because it is sick—both art and life are more ready to mix good and bad in all things. These ambiguities set Blade Runner apart from more grossly exploitative films marketed on the virtues of their shock effects. While the latter aim at bloody sadism to build word of mouth among teenagers, Blade Runner works its violence with a controlled artistic purpose.

The social evaluation of some of these films is also complicated by the chic flashes of progressive politics, inserted as if in apology for the cynical manipulation. In Ridley Scott‘s earlier Alien, for example, the terror, helplessness. and despair of the Nostromo’s crew are blamed on the capitalist Megacompany as well as on the alien creature wanted for its “Weapons Division.” There are appropriately proletarian rumblings from the crew, and, in the man’s company, only the cool woman “shop steward” is able to render both monster and company impotent.

Blade Runner, too, has its socially progressive aspect. It is solidly in the humanistic tradition going back to Mary Shelley’s Frankenstein, questioning human nature and identity, science, and the values of a society which licenses exploitation and murder. The androids are people turned into objects as well as objects which become people. By the end of the movie, the moral superiority of the androids over their creator and hunters is firmly established—they are, in Tyrell’s words, “more human than human.”

Without overvaluing Blade Runner as serious art, it is clear that trendy filmmakers appreciate art and money, and Hollywood’s blessings come very mixed. Thus, putting aside for a while the always appropriate outrage at media violence, the most artistically dangerous tendency in this film may be the violence done to the art of screenwriting. Blade Runner is one of many recent movies in which the screenplay is overpowered by brilliance in set design and special effects. Whether or not there will be any real life slashings and bone crushings as a result of this movie, any success it has will confirm filmmakers in believing they can dispense with coherence and characterizations in their screenplays.

An example of Blade Runner‘s morbid mixture of brilliance and shoddiness is the ho-hum homage to film noir. The film noir style is well-suited to the movie’s themes—from Los Angeles’ weather and decadence to the moral emptiness and hypocrisy of a society which mass markets Adam and Eve, or the law and order which kills the creations which are more human than their creators. Most of the echoes of Forties’ films are museum exercises—the voice-over of the hard-boiled, cynical detective; the stereotype of the tough, crude boss-cop Bryant; the Forties hairdo and padded shoulders of Rachael. There was enough of film noir in Blade Runner‘s overall conception and stylization—or even in the lighting—to make these sops to the buffs superfluous.

More serious, the ambience suggested so carefully by details of lighting, sound, and sets is betrayed by the incongruous shift in tone at the end, as Deckard and Rachael escape to the lush, idyllic “north” (Beverly Hills?). Suddenly the loose ends are all at once revealed. Why is this “Eden” uninhabited and presumably beyond the reach of the police? Why will Rachael be safe? How could Deckard have been so easily compelled to work for Bryant if escape is later so simple? And why is half of Los Angeles in ruins, half overcrowded, if there is this unsettled vacationland within reach? Mostly due to abandoning the postnuclear holocaust setting of Dick’s novel, the loose ends become distracting because of the sudden shift in tone. Whether or not this future world has a place for happy endings, the “north” is too suddenly invented and the intrusion of wishful fantasy is jarring in its sentimentality. A more convincing ending was the death of Batty, rain falling on him as he mourns the end of his poetry and experience “lost like tears in the rain,” while the camera turns the grief-crazed killer into a tranquil statue.

Blade Runner is more compelling as a display of style and invention than as a story, the filmmakers caring more for the design than for the people. Androids, too, were supposed to be incapable of “empathy,” a flaw detected by cops using the Voigt-Kampff reaction test. Perhaps the job of film critics will, one day, be the detection of which screenplays are written by androids in an industry where human screenwriters seem fated to be replaced by brilliant replicants. Could the writers of Blade Runner pass the Voigt-Kampff test? Does Warner Bros. care? 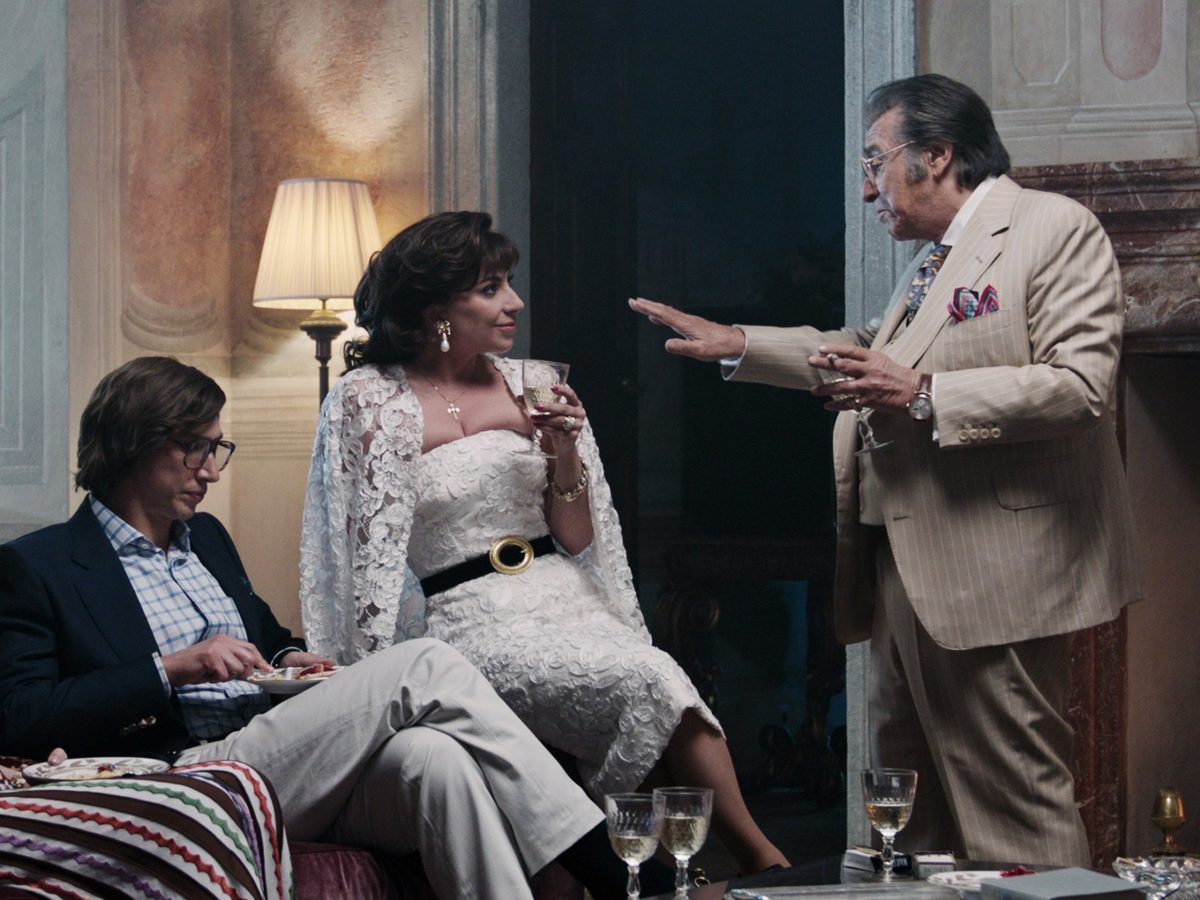 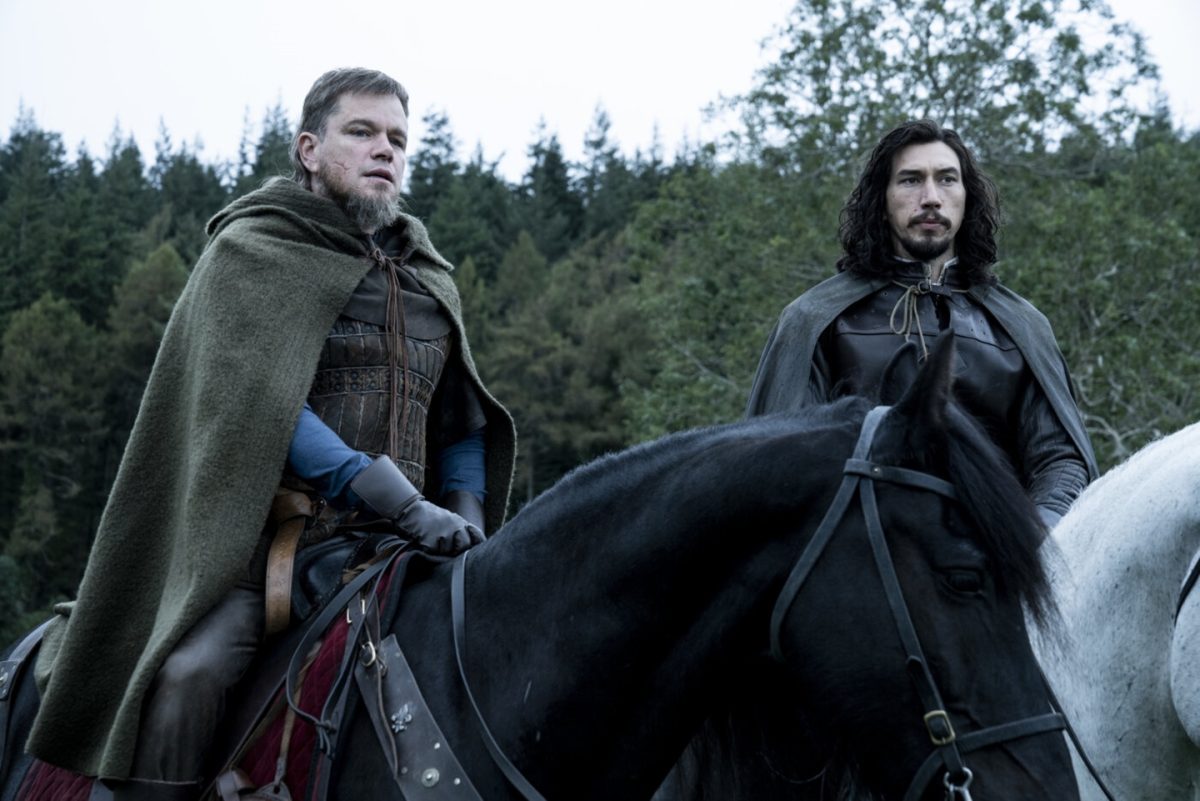 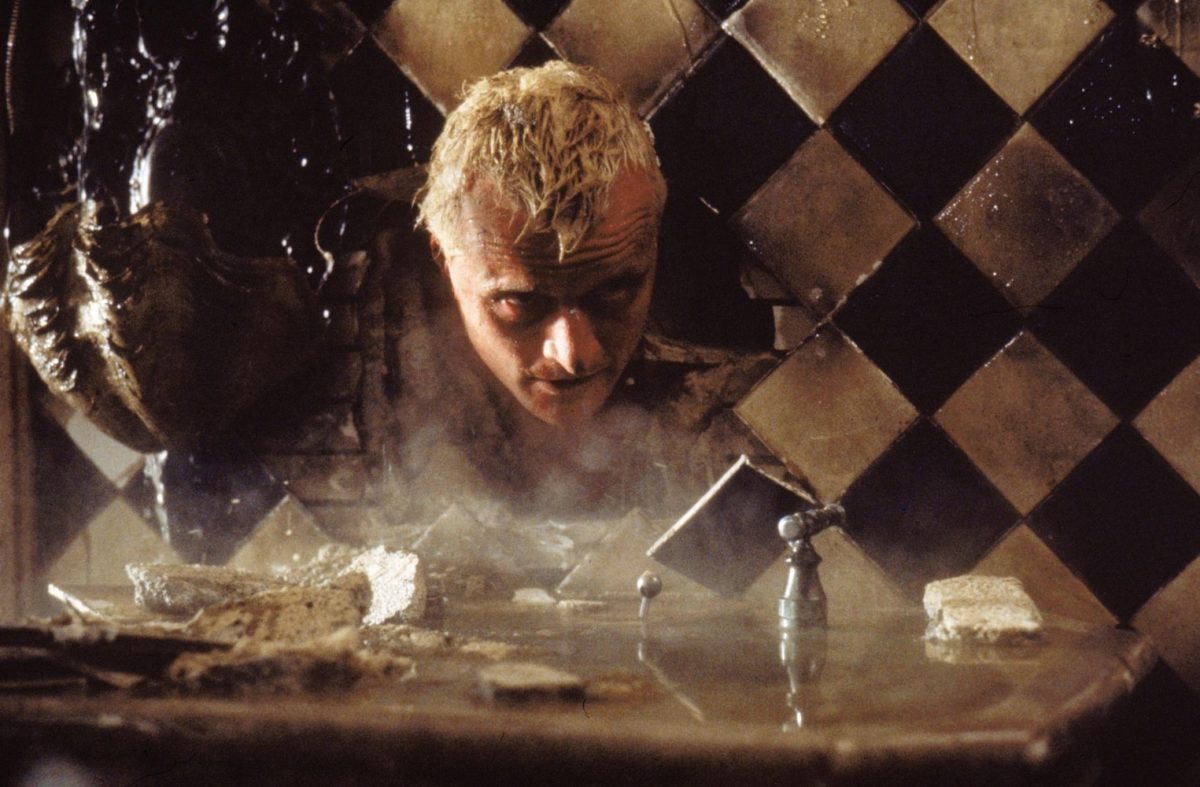