Tom Segura Overdoses – This Is Not Happening [Transcript]

Tom Segura returns home from college for the first time and ends up in the emergency room. 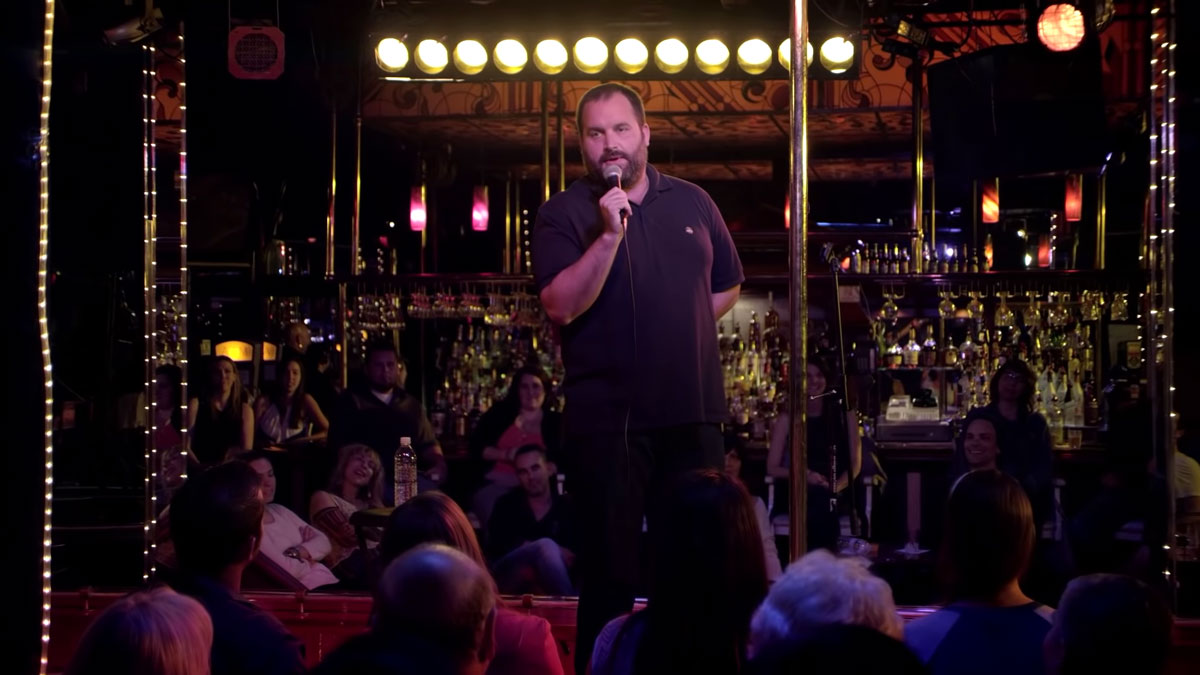 This woman goes “Hey Tom, you are in the emergency room and you overdosed.” And they’re like “what did you take?” So, I write, ‘Heroine.’ And they go “Are you serious?” And, I write, “Jk.”

Thanks, Ari Shaffir, everybody. Let him hear it. Ari Shaffir. [applause] Alright. Let’s go back to 1997. Holy shit. Fuck. That time flies. And, I’m a freshman in college. And, Thanksgiving. Remember Thanksgiving everybody? [laughter] That’s the first time that you go, usually, back home. That’s your first break in your freshman year. And, it’s a big deal, because it’s also like a mini class reunion, because it’s the first time you see everybody you used to go to school with everyday. You’re back. Your first few months. And, everybody’s recapping. And the big thing is the next day. The day after Thanksgiving. Everybody gets together and parties their fucking balls off while acting like they’re a new person.

Right I start off, I find the guy, one of the guys that didn’t go to school, and he’s like “I’m the new drug supplier.” And, I’m like “I remember you from math.” [laughter] And uh, he asks me what I want and I’m like “What do you got?” And, he goes “I have ecstasy.” And, I go “Yeah!” “Everyone says that’s fun, let’s try it!” [laughter] And I start taking it, and, oh! I forgot to mention. Before I went to college, senior year, I got really into a drug that was making its way especially through the south, through Florida, called GHB. And, I’m sure, I don’t know if you know what it is, it’s gamma-Hydroxybutyric acid your body naturally produces it. Sometimes, there are some places where they regulate it as an anesthetic. But, basically, when you get it, somebody made it in a bathtub [laughter] and that’s the good stuff, alright? [laughter] And they sell it to you, and they get it in a water bottle.

GHB, if it’s good stuff, it’s like, we used to call it perma-grin. Cause you’d be like [inebriated sounds] And if someone’s like “Fuck you!” You’re like “[happy inebriated sounds]” [laughter] So, I’m like “Alright, where is it?” And he goes “It’s right there!” and he has a gallon jug. Right? And, I’m like “Wow, that’s not a water bottle” And he’s like “Yeah, I haven’t even put it into the water bottles yet. That’s the full thing.” And it’s a full gallon. Now if you think about a full gallon you know that A] the cap is much different, it’s flatter you’re not gonna, and it’s also heavier, so I don’t know how to pour it, so he’s like “Just take a shot!” And I’m like “Alright!” [laughter] So I put it up and then I go in my mind, oh shit, I have like nine shots in my mouth right now. [laughter] So, the options are: do I spit it back into [laughter] the main jug, which I feel like he’s gonna be not cool with that, you know? Being that he’s a drug dealer and all. [laughter] The other thing would be spit it out on the ground, and I don’t wanna be rude, right? So, I just go like [grunts] [laughter] And, I’m like “Holy fuckin’ shit, I have taken way too much GHB.”

Now, I’m leaving out the point that you’re not supposed to mix GHB and alcohol. It is potentially fatal. You may have known this, if you didn’t, it can be. At this point, I am on 13 or 14 drinks [audience exclaims] and it’s liquor, you know, vodka drinks, and I’m just pounding ’em, I get the nine shots into me, and then I walk back into the bar, and I’m like “What’s up everybah?” Like, I’m fuckin’ [laughter]. They’re like “Where does all this personality come from?” “Ah, it’s just natural man.” And then, I sat down I remember sitting down and then a girlfriend came, and she sat on my lap and then lights out like I just don’t remember anything like I went to sleep. All I remember is that I wake up, and I’m looking at lights on a ceiling right? I’m just like “Oh, shit, is this heaven?” And, then I see a woman come in the frame, right? Because I’m laying on my back. I can’t talk. I can’t move my arms. And this woman goes, “Hey Tom, you are in the Emergency Room, and you overdosed on drugs and now you’re coming out of a coma.” And, I’m just like “[unintelligible sounds of affirmation]” [laughter] Like processing it, but the process literally was just eyes closed, like “Ah, shit” and my only thought was like “I hope nobody knows.” That’s the only thing I’m thinking. [laughter] I hope nobody knows. And then I open my eyes again and my parents come in the frame. And I’m like “Ah, everybody knows.” [laughter] And they look so, just like “We thought you were a good kid what the fuck?” So, I’d never been in trouble They won’t let your arm out cause I would pull out the tubes. I have a tube for breathing, I have another tube that’s pumping liquid charcoal into my stomach because that makes the chemicals of the drugs come together and then you also can’t digest it, so you vomit. Which is what they want you to do. So, as I’m like [embarrassed whimpers], I’m also like [retching sounds] and throwing up, right? [laughter] So, they give me a piece of paper and a pen, but I can’t really write normally, cause I’m strapped down, but I can kinda chicken scratch, and they’re like “What did you take?” Cause they’re tryna figure out they don’t even know what I took. So I write “Heroin.” And they go, “Are you serious?!” And I write, “Jk” [laughter] They’re not like “Good one!” They’re like “What the fuck, are you joking right now?” [raucous laughter] So then, the kid in me, I’m looking at my parents and I’m so worried about them. I write on the paper I go “Are you mad at me?” – [Audience Member] Awww. And my parents, at that moment my dad reads it and goes “No, buddy, just disappointed.” [laughter] Can you save that for when I’m breathing on my own?

Like so, I’m in that emergency room, I get moved to critical then ICU, and in the ICU, a doctor comes in who I hadn’t seen yet. And, I’m later told this is the doctor, they tell me, this is the doctor that saved your life. So, I’m sitting there in the bed and he comes in, and he goes “Are you in a band?” [laughter] And I was like “What, man? What?” And he goes “Are you in a band?” And I was like “No, I’m not in a fuckin’ band.” And he goes, “Well you had enough in you to take down two drum players and a bass player man” [laughter] And, I’m like “You, now, with the fuckin’ jokes? Really?” [laughter] And he goes “What did you take?” And I go, I don’t know “I took a couple pills” I told him honestly, “I had some drinks and, I took, uh you know, some GHB probably enough for a whole lot of people [laughter] And he goes, “What about the heroine?” And I go “nah, I was just joking.” And he goes “No, you have heroine in your system.” And I was like “[laughs] really?” And he’s like “Yeah, you have heroine, you have cocaine you have PCP, you also have the same chemicals that are in um, cleaners, like some of the, like the super duty cleaners.” And I’m like “What the fuck, man?” And he goes “Where’d you get your GHB from?” And I go “one of my buddies from high school.” He’s like “yeah, he’s a good friend. He gave you some fuckin’ WD40 to put in your system.” So, I, you know, eventually get to breathe on my own and all this shit and then he comes back, and they’re like “You know, the doctor” the nurse tells me “the doctor that saved you wants to talk to you.” And, I’m like “Alright.” And, I ask him, “how did I survive?” And he was like, “honestly… cause you’re fat [laughter] like you’re pretty fat.” [laughter] I was like “What, man?” [laughter continues] And he goes “I mean, a smaller person would definitely, like a 120 pound person would die halfway through this. This is just one of the only times where it’s good to be fat, right now” and that’s yeah, that’s why I still haven’t lost the weight, you guys. [laughter, cheering] [upbeat electronic music] – The best part is when he called you fat.

Tom Segura everybody, keep it going for Tom Segura. Hey everybody, I just took a break from flying through space to tell you to, uh, click the link over there so we get more YouTube hits. And, don’t forget to subscribe, so that next week when the story comes out, you’ll get that as well. Oh, there goes a celestial planet. Hi, planet. [staccato tones]