John Stewart accepts the award for the 2022 Mark Twain Prize presented at The Kennedy Center. 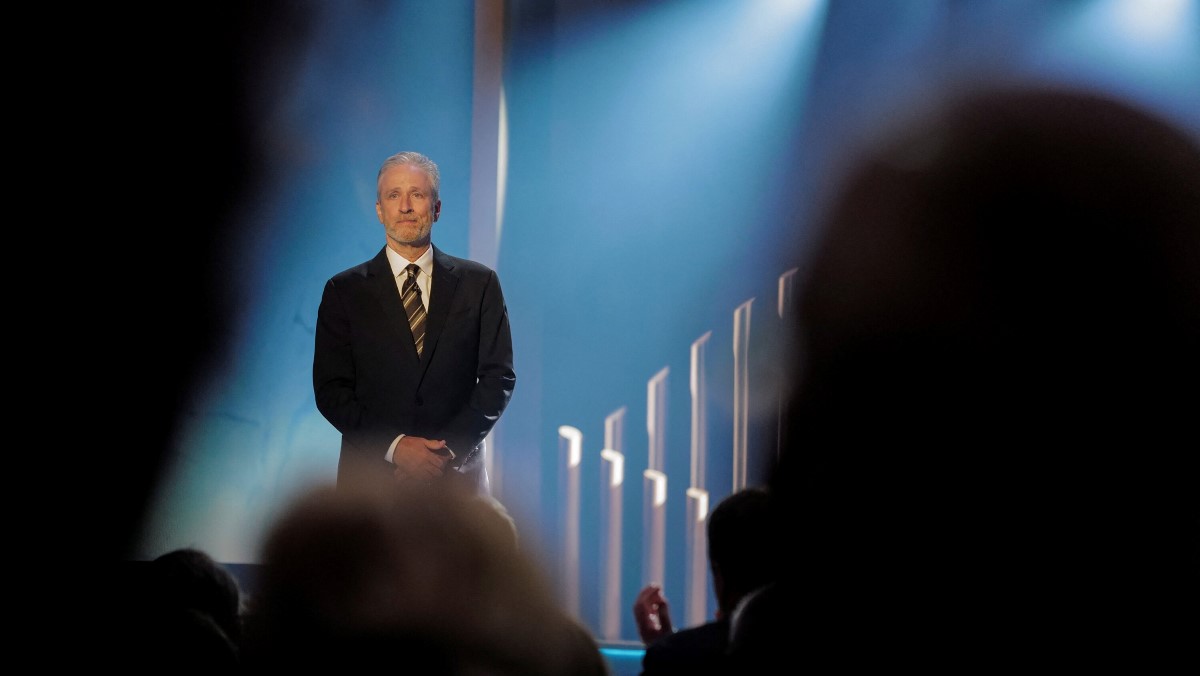 Thank you so much.

(chuckles) This is incredible. You’re f*cking amazing. Gary Clark, Jr., and the whole band, just, is amazing. (audience applauding) What an amazing night. When I first got the call, when the Kennedy Center, I would receive the Twain Prize, I said to my wife, “Don’t give them any of our credit card information.” “The Kennedys wanna give you the Twain.” (audience laughs) “And it could be yours, just, there’s some shipping costs.” But I Googled it, (audience laughs) and it’s real. It’s a real award. It’s incredible, and to see you all here, masked, is so f*cking weird, I can’t even tell you. It does feel like a dystopian movie, or like a weird O. Henry story, where at the end they say to the comedian, you know, “You can perform, but no mouths,” (audience laughing) “there can be…” You know, and backstage, I’m sure the comedians’re like, “Yo, did you see those eye crinkles? I was f*cking killing it.” (audience laughs) “Oh my god, they were squinting.

This is a wonderful award. To see all my friends here, and all the people I’ve worked with for their years. Just, it reminds me of just how many people I carried… (audience laughs) for so long.

I have so many people to thank, really, for all this. First and foremost, my mother is here, who is right there.

You know, everybody talked about work ethic, that’s where I learned it. 1971 or 1972, my father left the family, and we had tough times. It was tough, and she coulda rolled over, but she didn’t. She got up, and she showed me that you’re not your circumstances. You’re not what happens to you, you’re what you make of it. And she got up, and she got her *** in gear, and she gave us a good life. And I could never repay her for that.

I wanna thank my brother, who is here. My brother, who was so academically gifted that I knew I would have to go in a different direction, so, I thank him for that.

Little Maggie is also here. Nothing’s better than when little Maggie says to me, “You wanna go for a drive?” And we get in the car and we go for a drive. And if any of you wanna have a transcendent experience, get in the car with your daughter and drive down the Jersey shore, and listen to Jay Cole “She’s Mine”, parts one and two (audience laughing) as the sun is setting. And it’s beautiful. And I can’t be prouder of the both of you, and I love you both so much.

And my wife, who… I met my wife on a blind date in 1995. And our first date, I had it all picked out. We went to a little hole-in-the-wall place called Lupe’s East LA Kitchen on 6th Avenue and Watts in New York. And we went there because I am a motherf*cking baller. (audience laughs) But it was a really interesting date, because she didn’t say anything the whole time. (audience laughs) So afterwards, I thought, “Well, I’ll take one last shot.”

I was walking her back, she lived on Mulberry Street. I said, “You wanna just duck into a bar real quick, and just have a quick drink?” Well, one scotch and soda (audience titters) and it was on. (audience laughs) And I was hooked. And I have to say, again, a lesson for all of you, if you’re gonna go on a date, make sure the place has a liquor license. (audience laughs) Because if it doesn’t, you could miss out on your favorite person in the world.

Love you. Still the best laugh I ever earned.

And to all the people that came here tonight to see this, I can’t thank you enough. It’s ironic, I carry around, always, a quote by Twain. It just so happens (audience laughing) that I am never without it. And it’s about ideas, and the quote is, “The radical invents the views. But when he has worn them out, the conservative adopts them.” And I keep that with me as a reminder that even for Twain, they’re not all f*cking gems. (audience laughs)

Even the most celebrated artist amongst us ***** the bed. (audience laughs) But the point is this, what we do is an iterative business. It’s a grind. It’s work. The best amongst us just keep at it. I began in 1987. And my journey began, it’s the weirdest thing, I walked into a basement in Greenwich Village called the Comedy Cellar. And when you’re a comic, you look in a room, and 200 seats are facing one way. And there’s one stool, and it has a light shining on it. And you walk into that room, and go, “That’s gonna be my chair. I’m gonna sit in that one.” And you spend the rest of your career trying to earn that stool. And some nights, man, you don’t even belong in the club, you don’t even belong on the street. But you get back at it, because there isn’t any fixed point in comedy where you make it or you don’t make it. It’s the journey, with the greatest friends I could ever possibly have made. And the terrible nights, and the great nights, and the fun we have sitting at the table. That’s what this weekend’s been about for me, is catching up with great friends, and sitting at the table, and laughing our ****** off, and us all going, like, “Oh god, what time do we have to be there tonight?” Not that you’re not great. (audience laughs)

And there’s a lot of talk right now about what’s gonna happen to comedy. You know, there was the slap. And what does the slap say about comedy, and is comedy gonna survive in this new moment? Now I’ve got news for you, comedy survives every moment. And having Bassem, here, is a really great example of the true threat to comedy.

It’s not the woke police that’re gonna be an existential threat to comedy. It’s not the Fresh Prince, it’s the crown prince. It’s not the fragility of audiences, it’s the fragility of leaders. You don’t owe us anything, as an audience. If we say sh*t you don’t like, say sh*t back, do whatever you gotta do. Don’t get up and hit us. (audience laughs) (attendee cheers) But that’s just the game we’re in. We talk **** for a living, you talk **** back, and we just gotta be better than you. And we’ve gotta find a way to entertain you. But the threat to comedy, comedy doesn’t change the world, but it’s a bellwether. We’re the banana peel in the coal mine. (audience titters) When a society is under threat, comedians are the ones who get sent away first. It’s just a reminder to people that democracy is under threat. Authoritarians are the threat to comedy, to art, to music, to thought, to poetry…

…to progress, to all those things. All that **** is a red herring. It ain’t the pronoun police, it’s the secret police. It always has been, and it always will be. And this man’s decapitated visage (audience laughs) is a reminder to all of us that what we have is fragile, and precious. And the way to guard against it isn’t to change how audiences think. It’s to change how leaders lead. And so, I thank you so much for your support tonight, and for this award.

Comedian Bill Burr performs a stand-up routine at Red Rocks Amphitheatre, Colorado in 2021. He sounds off on cancel culture, feminism, getting bad reviews from his wife and a life-changing epiphany.