Bert Kreischer gets into serious trouble when he tries to wrestle a bear for his television show. 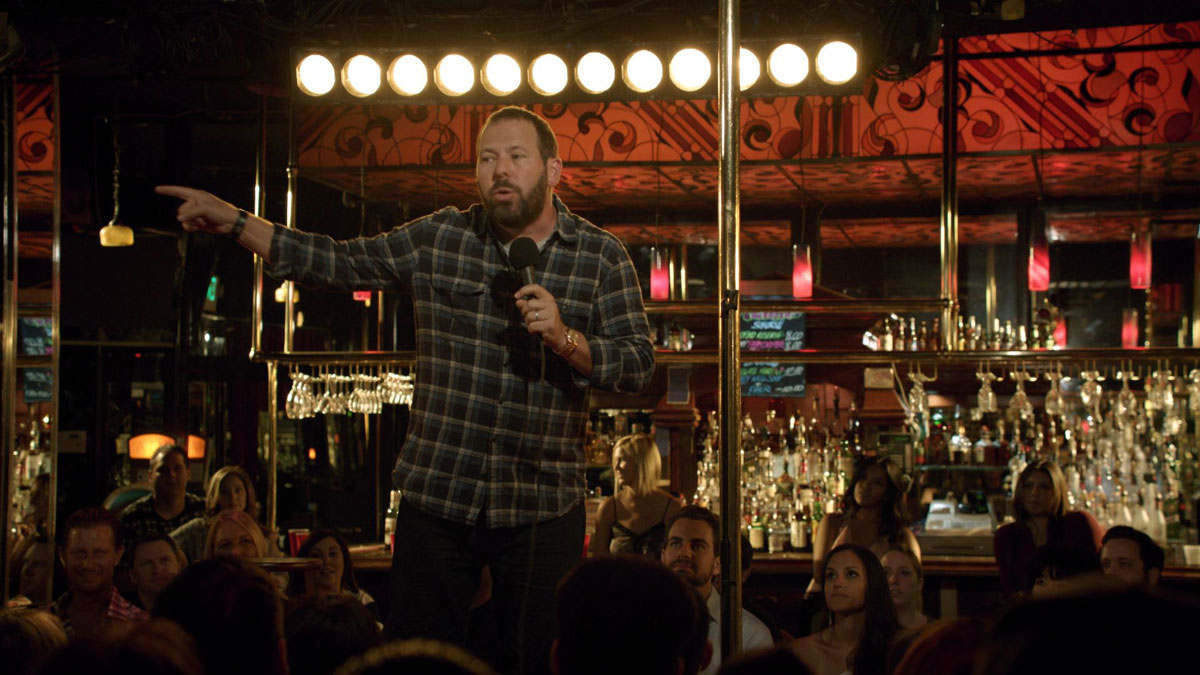 The machine, Mr. Bert Kreischer, everybody. Let him hear it.

I fought a bear one time. [laughs] I know– It sounds as ridiculous to me as it does to you. But I used to have a show called Hurt Bert. It was on FX, and I used to take new men’s dangerous jobs. Every week, it was a brand-new guy, and I took his dangerous job. So you can imagine the excitement I got when I had– when I got a call one morning and they said, “Hey, do you want to fight a bear?” I was like, “Who does that for a living?” And they’re like, “You do on Thursday.” So I show up on set, and it’s a real grizzly bear. It is a 9-foot bear sitting on a park bench just– A vacant look in– As dumb as you think a bear would look. So I walk up. I’m 28 years old. I don’t know any better. I stick my hand in front of his nose so he can get my scent, and the trainer loses his shit. He goes, “What are you doing?” I was like, “I’m letting– He’s getting my scent.” He goes, “This is a grizzly bear, not a labradoodle.” He goes, “That’s not how we do it. We have protocol around here.” I said, “Okay, what am I supposed to do?” He goes, “Take these,” and he hands me five marshmallows. He goes, “When the bear’s not looking, “take a marshmallow, put it in your mouth. “Then, discreetly walk in front of the bear, “just casually, show him the marshmallow like– “And allow the bear the opportunity to engage you. “He needs to engage you “and take the marshmallow out of your mouth with his mouth. This way, he’ll learn to trust you.” And I was like, “fuck that. “Who thought of this, the bear? Is this the bear’s idea?” He’s like, “Hey, buddy, this is how we do it,” and my whole television crew is behind him like…

♪ This is how we do it ♪

It’s my second TV show ever. I have no idea what I’m doing. I’m 28, and I want– So I’m like, “All right. I don’t care. I’ll do it.” So I take five marshmallows, I hide behind the bear, and like David Blaine, I whip one into my mouth. Then nonchalantly walk in front of the bear like a street hooker, like… [moaning] And the bear goes from vacant to excited, just… [snorts and roars] And I’m going… [muffled crying] And he starts jumping. [roars] And I’m going… [cries] And he rushes me and tongues it out of my mouth. Tongues it. Bears never brush their teeth. I’m making out with a homeless person five times in a row. And I’m like… [retching] We get done, and the trainer goes, “Fantastic. We’re ready.” I go, “Hold on. I haven’t learned anything.” He goes, “You kidding me? “You learned the most important lesson of the day, and that is, the bear likes marshmallows.” I go, “What’s that mean for me?” He goes, “Listen, if you get in trouble, “just very confidently say ‘marshmallow,’ “and what’ll happen is, the bear will hear that, “and he’ll give you some space to do your marshmallow trick. “But we’ll hear it, we’ll know you’re in trouble, and we’ll get you out of there; that’s your safe word.” I was like, “Yeah, but he thinks they’re inside me.” He’s like, “You’ll be fine. Let’s go!”

And the bear– I swear– And I know you’re gonna go, “Bullshit.” The bear was smiling. He was– He’s got that look in his face like, “I know how to get marshmallows around here, bitch.” And he runs up to me, and I can’t express it perfectly. It’s like being in a car crash, the most helpless I’ve ever felt. He grabs me by the ears, both paws, lifts me off the ground effortlessly, and starts trying to shake marshmallows out of my ass, just… [roars] And I’m going, “Marshmallow, marshmallow. Marshmallow!” But no one can hear me ’cause there’s a 9-foot grizzly bear going… [roaring] All of a sudden, he drops me, and that is at the moment that I thought I was gonna die. He lets go, and I’m like, “Thank God.” Then his fingernail grabbed my belt loop, just snagged it, and he spun me doggy style and locked on in a bear hug, just… [roars] Grinding gently on my ass, just– Now we’re both facing the same direction. I’m looking at the crew, the trainer, going, “Marshmallow. Marshmallow, marshmallow.” Everyone’s laughing except for the trainer, who looks panicked. He waves and catches eyes with me and goes, “Go limp!” I’m like, “Please be talking to me right now. “A–Is there a bear cock climbing up my jeans?” About to split center seam, just– [strained] “Marshmallow.” So I go limp. I go limp. Now it looks like I’m getting date raped by a bear, just– I slide out of his paws, land on my back, and that’s the last thing I remember, because apparently his instincts took over and he sat on my face.

My wife, who I had been dating for three months at the time– I had invited her to the set so I could impress her. My wife’s not afraid of big animals at all. She goes over to the bag of marshmallows, grabs a marshmallow, puts it in her mouth. Stands by my feet and goes– The bear then takes his balls out of my mouth, walks over to her. They pull the bear to one side, her to the other. They drag me under a tree, and I wake up in the lap of my producer Tim Scott. I open my eyes. I look at Tim. It’s the first thing I see, and I was like, “What happened?” He was like, “Well, you got raped and tea-bagged by a bear. You might want to get tested.” And he’s like, “That chick– that LeAnn chick, I think she saved your life.” And I look over, and my wife, at that moment, is coming running over to me, and it’s like– It’s out of a movie, and I know you’re gonna go, “Really, is this how this fucking happened?” Well, it’s my narrative, okay? She leans in. Her head blocks the sun. There is a halo from the Lord himself, or herself– I don’t care. And she is staring down at me, and she says to me in her Southern accent, “Are you okay?” And I look back at her with the sun caressing her face, and I knew without a doubt in that instant, at that very moment– You’re like, “Really? That’s when you knew?” Yeah, that’s when I knew. I would’ve never done that for her.