Ali Wong discusses her deepest fantasies, the challenges of monogamy, and her feelings about single people. 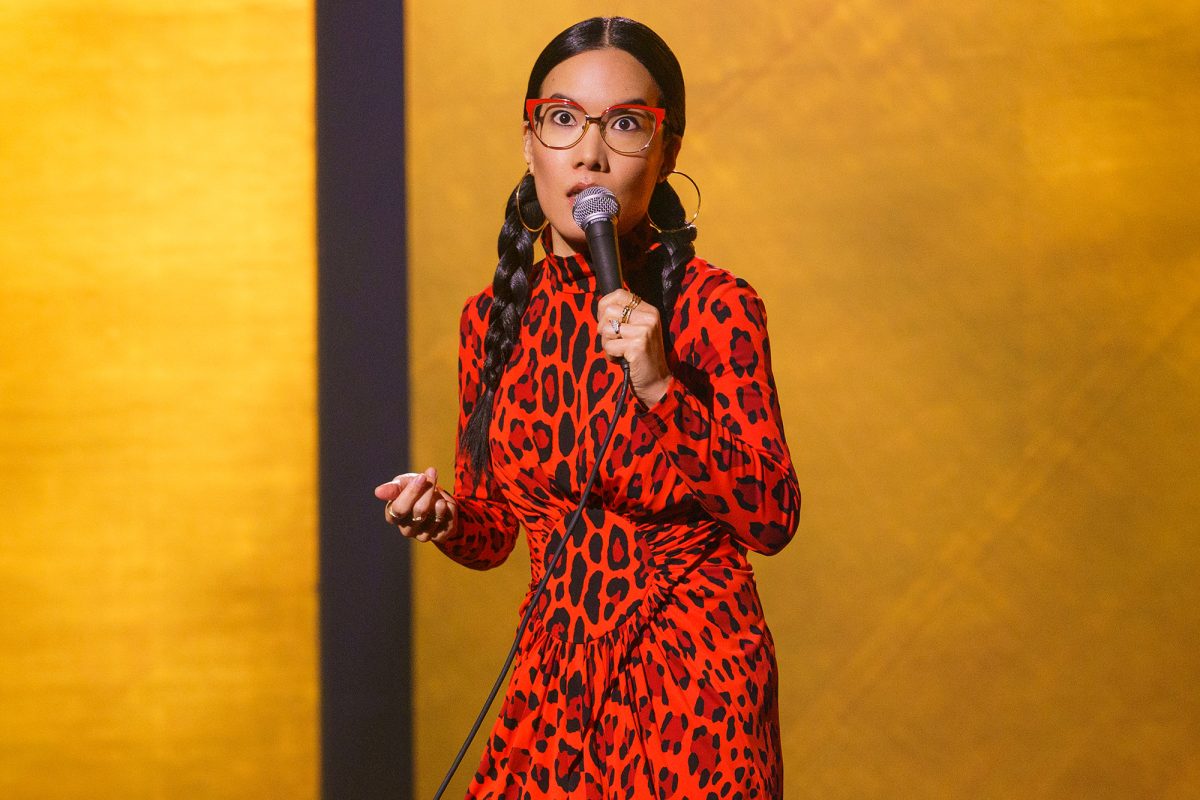 Ladies, gentlemen, and everybody, put your hands together. Please welcome to the stage Ali Wong!

Hi, everybody! We love you, Ali! Thank you. You know, I’m very jealous and bitter that when a man finds any ounce of mainstream success in comedy, they get to date models, actresses, and pop singers. One of my dear friends is arguably one of the top stand-up comics in the world. And for the past year and a half, she’s been dating a magician. I was like, “Okay, you know, no judgment, girl, but is he at least, like, a good magician?” “Is he, like, the best magician like how you are one of the best stand-up comedians?” I looked that dude up on Yelp, he got two stars. That’s what being one of the best female stand-up comics will achieve you. A “ain’t shit” magician.

I love to get cummed on, on the face. I do. Because it’s so nasty and is so easy. It is so easy, especially when you compare it to sucking dick, which is so physically taxing. The choking, the eyes watering. And if you really want to keep it 100, you got to add the pepper grinding. A lot, you know? Whenever I get a deep tissue massage, the masseuse is always like, “Do you sit and work at a computer all day?” I’m like, “No, I sucked dick last night.” “Now I can’t look to the left.”

So in addition to all of that labor, when you suck dick, there is all of this performing and pretending involved. You have to tell all of these lies. “This is the biggest dick I’ve ever had in my mouth.” “I love sucking your cock. It makes my pussy so wet.” “Yummy!” But you have to tell the lies to make the man cum faster. The lies will set you free! But then when you get cummed on on the face, your only job as the woman is to make an enthusiastic expression. And then your other assignment is to not laugh… while this grown-ass man is straddling your rib cage, he looking down at you, you looking up at him, and you see him from this very unflattering angle where he got that Jabba the Hutt double chin, you know? He all possessed by the Holy Spirit. “Look at me, Mommy, watch me, pay attention, look at me!”

I have never, ever wanted to date a man that was chill. ‘Cause chill don’t pay the bills. My nephew is 25 years old, and he is dating this architect. My goodness, she is so smart and interesting, successful, and charismatic, and we all hope that he marries her one day. But he called me up earlier this week and he was like, “You know, Auntie Ali, I think I’mma break up with her.” “Yeah, because she’s a boss at work, and so she thinks it’s okay to come home and boss me around.” I was like, “Oh.” “Well, that shit’s gonna happen to you no matter what.” “Whether she a boss, whether she employed or unemployed, once you get married and have kids, your wife gonna boss you around.” “And you would know that if you watched House Hunters.”

House Hunters is a show on HGTV where a couple pretends that there’s a decision to be made together. And they go on this fake-ass journey looking at three different houses, and the audience is meant to be left in suspense. “Which house are they gonna choose?” It’s whichever one Barbara wanted in the first place, okay? And Barbara, who lives in Boise, Idaho, or wherever the fuck these HGTV shows are filmed where houses cost $5,000 an acre… Barbara, she don’t got money, power, or respect. But Barbara is a woman, and all women are very good at being extremely unpleasant… and holding your happiness and self-esteem hostage until we get what we fucking deserve, okay? Yes. That is a superpower that we evolved to compensate for our lack of earning potential. You can’t tell any woman what to do, so you might as well pick the bitch that will give you health insurance, okay?

I know exactly why there’s a disproportionate amount of men that do stand-up. It’s all because of fan pussy. We call them chuckle fuckers. These poor, naïve women who get dickmatized when they laugh. And fan pussy is so motivating because fan pussy is young and sexy and exciting. Fan pussy is a great reward for doing stand-up comedy. And fan dick is frightening. Any man watching me, listening to what I have to say, and thinking to themselves, “I want to fuck her…” is a raging psychopath. And has extremely good taste. Fan dick is not interested in showing me a good time. Fan dick wants to trim my pubes and sew them into wigs for his antique doll collection. That’s why I don’t see more women doing stand-up. There is no reward, only danger and punishment. Lot of my male stand-up comic friends be hooking up with women, beautiful, gorgeous women, through the DMs. Direct messaging. I never check my DMs. And when I do, it’s only to see if Sanrio, the owners of Hello Kitty, have finally contacted me to offer sponsorship. Yeah. Come on! I think I’d be a great fit, and I want all of that shit. I want the Gudetama pajamas. I want the erasers that smell like the gum. And I want the gum that tastes like the erasers. I want all of that shit. But no. My DMs are full of these Silence of the Lambs motherfuckers. It’s these dudes who always have zero followers. Do you know anybody who doesn’t know anybody? They don’t even offer to take me out to dinner or lick my pussy. They just threaten to decapitate me if I don’t let them smell my feet.

And it’s a shame, you know? It’s very disturbing, this disparity in quality between fan pussy and fan dick. It is so upsetting to a person like me. Because I think about cheating on my husband… every five minutes. I haven’t done it yet. Not because I’m a good person, only because no worthy opportunity has presented itself.

You know, as much as I would love to cheat on my husband, I cannot afford to get a divorce. I can’t, you know? The reality is, I need my husband way more than he needs me. It is ten times harder to find a decent husband than it is to find a great wife. It’s so fucking annoying, you know? I’m almost 40, so I have all these, like, acquaintances getting divorced right now. All these women, they keep coming up to me… “Ali, it is so difficult dating out there for a divorced woman.” “None of these men can handle me, a strong woman.” “None of these men want a strong woman.” I’m like, “You’re an annoying woman, but…” I do believe that it’s slim pickings out there, you know?

And then these women, they keep telling me about their battle and how ugly it is, how they’re fighting for full custody of their kids. I’m like, “Why?” Even half custody sounds like American Horror Story. I can’t let go of my husband, you know? He’s very handsome, he’s very sexy, he’s very much my type. I have a very specific type. I like dudes who look as close to Keanu Reeves as possible. Yeah. And that’s my husband, straight up. He’s so good-looking, he’s so interesting. He speaks three different languages. He introduced me to mushrooms and ayahuasca, changed my life. So in addition to being my husband, he’s also my drug dealer. I can’t lose that Shaman connect, you know? My husband’s so smart. He went to Carnegie Mellon, Harvard Business School. He’s a Fulbright scholar. He was smart enough to choose me, to invest in me, when I was 20 pounds heavier, had chronic acne and no money. He bought low. And if we get divorced, he going to sell high. I can’t let him get away with that!

So my husband, he’s all of these wonderful things, right? But most importantly, he gives me permission to be myself. Which perhaps, for a wild, untamable spirit, is the most important quality to find in a man. But people think it’s so difficult for my husband to do something so simple as giving me permission to be myself. They always ask him, “Oh my God, how do you feel about your wife Ali going up on stage in front of all of these strangers, talking about how much she wants to cheat on you?” You know, right now while we’re all here, my husband is at home in the house that I bought… telling time on the Rolex I got him for Father’s Day… jacking off to porn that he streams on the high-speed internet I pay for every month. So, he always tells me… “Yeah, you go ahead, you know you…” He doesn’t give a shit about what I say on stage because he’s too busy living the life I wanted for myself. I’m the one leaning in while he is lying down. And now that I’m the clear breadwinner, he don’t choke me like he used to. It’s too high stakes if I die. I’ll be like, “Harder, come on, harder!” And he’ll be like, “But I really want a PS5.” “It’s all sold out, and the waitlists and the ports are all full.” People like to assume that because my husband is very spiritual and because he’s Asian American, that he’s some kind of softy, when the truth is he got this backbone made of pure, solid steel. He is a motherfucker. And whenever we get into an argument and I raise my voice, he’ll look me in the eye and say to me, “Oh, you don’t talk to me like that.” And then I’ll be like… “I’mma suck your dick.” “You put me in my place again.” “And then you give me permission to be myself, and then you tell me what to do, and then you celebrate me.” And that, single people, is what a healthy marriage looks like, okay?

I’ve been Ali Wong, have a good night, everybody. Thank you!