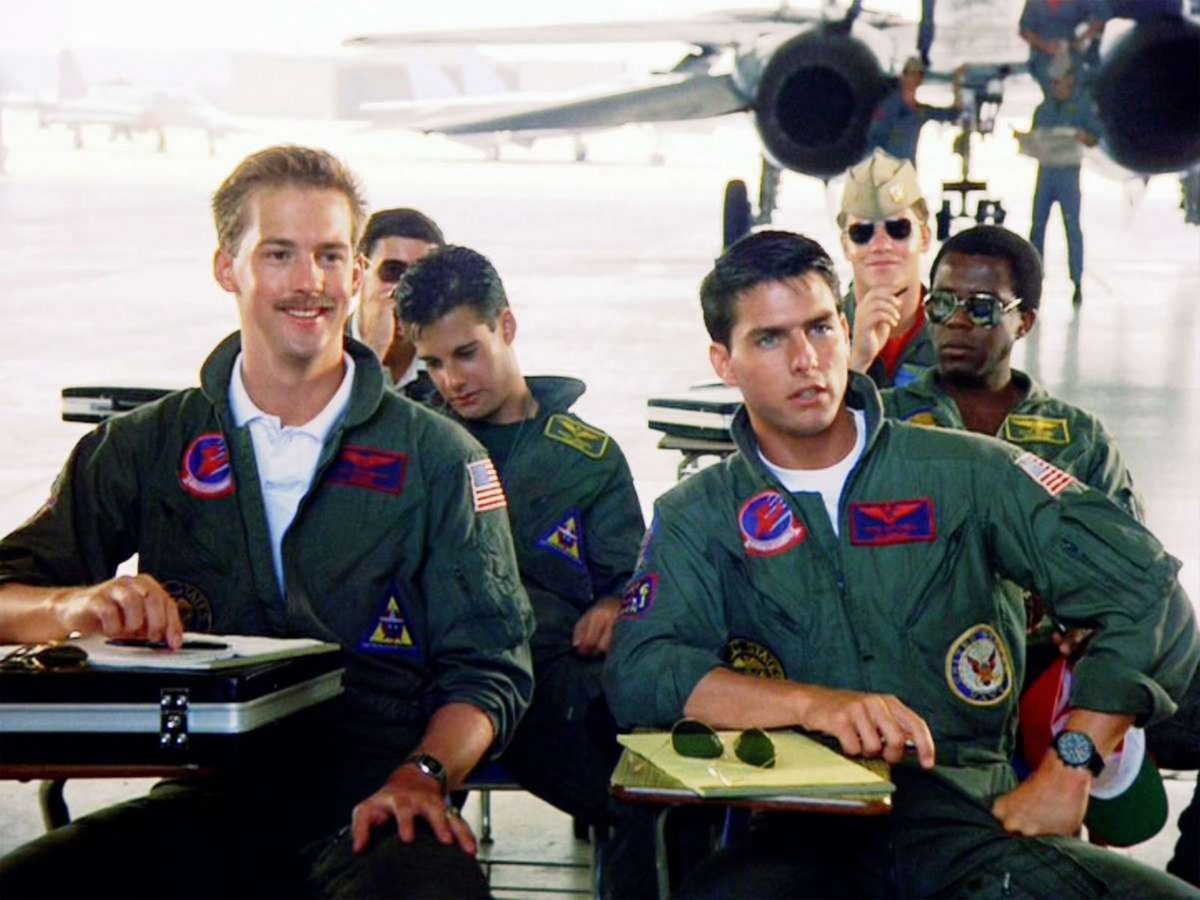 Top Gun is about the special training of the best combat pilots in the U.S. Navy. At the Miramar Naval Air Station in California is a master school to which one percent of the Navy’s fighter pilots is sent for extra polishing. The school has a formal name; its sobriquet is Top Gun. Our hero, Tom Cruise, is a fighter pilot aboard an aircraft carrier in the Indian Ocean. He distinguishes himself in combat with some MIGs (unmarked with national insignia of any kind) and is then sent to Top Gun. He has various predictable adventures at the school with friends and rivals. He has a love affair on the ground, which, to make that affair mod, is not with a cocktail waitress or the commandant’s secretary but with a civilian instructor at the school, Kelly McGillis. Excepting the contemporary equipment and lingo and the hints about the possible enemy, this film is basically the same one they have been making in refurbished forms ever since William Wellman’s Wings (1927).

But this is certainly not to say that Top Gun, any more than some of its predecessors, is boring. An Officer and a Gentleman (1982) was boring because it concentrated on character and amour in the military world and did so with the clichés of adolescent fiction. Those (secondary) aspects of Top Gun are boring, too, but most of it is air stuff and is irresistibly exciting. A person who can be bored by a jet plane zooming off a flight deck or swooping down to land on a deck that seems to right itself just in time—that person is my spiritual superior. The air tactics, both in practice and in the reality of the beginning and end, are so graceful, so charged with double danger—accident and defeat—that they are like floating lyrics of possible death. (It’s after you find yourself thinking things like that last remark that you begin to get worried.)

Cruise is exactly what’s wanted in the part. His chest always seems about to burst with energy, and he plays his range of scenes adequately. Anthony Edwards, the Radar Intercept Officer who flies with him, is the perfect action-film pal, reticent, reliable, sweet. (When Edwards’s wife and small son turn up for a visit and we get scenes of family jolliness, we know that, in a picture of this kind, the pal’s number is up.) McGillis, often looking her most lovely, is over-qualified for her role. Both Reuben, Reuben and Witness asked more of her, which she supplied. Top honors in Top Gun don’t go to the actors. As usual in this sort of film, the credits for the nonactors are about six times as long as the cast list. The director, Tony Scott, the cinematographer, Jeffrey Kimball, the editors, Billy Weber and Chris Lebenzon, together with their many associates and assistants and the people who did the actual flying and aerial photography, the sound and visual effects, are an all-star cast in themselves.

I’m awed by the complicated work in some pictures, sci-fi and others, that are made in studios. But to do this air stuff must entail generalship far beyond anything that C. B. DeMille ever dreamed: immense detailed planning, rehearsals that are radio-directed both from ground and air, photography that risks failures for all sorts of reasons that wouldn’t apply on land, countless retakes, not because of muffed lines but muffed hundred-mile sorties. (The Navy itself, manifoldly thanked in the credits, is of course part of the cast.) None of the results is intrinsically different from those of many comparable past pictures, but here the air action is as complex as any I have seen, is well photographed and lucidly edited—we always know who is doing what—and is grimly beautiful.

What arises during the film, quite early and quite persistently, is a gnawing sense of hypocrisy. Not because of the violence: to tilt Dylan Thomas, after the first action-film death, there is no other. The discomfort arises from the state of mind on which the film is built and which it encourages, particularly among young people.

The young men in the film and their superiors are consecrated to standards, honored since prehistory, that seem increasingly isolated from other standards in the world. And although these men must have enormous technological knowledge and skill to operate their thirty-million-dollar planes, they are apparently isolated from the world of intellect that produced the very technology they employ. The military life has never encouraged individuality or intellect or introspection; but the very means that are now put in the hands of the military underscore this difference from the world around that life. Thus it underscores the pharisaism in the viewer. Many of us shudder at the idea of living such a life or of the young people we know living it. But secretly we are glad, we must be glad, that at least some young people do it. Whether or not we approve of the recent raid on Libya, we would have to be absolute pacifists (I am not one) to wish that the armed forces involved didn’t exist. Levels of outrage differ in us, instances of impulse to attack or retaliate; but even our dislike of violence would be different if such young men as Cruise and Edwards in the film weren’t ready.

The fact that the script by Jim Cash and Jack Epps Jr. is only a retooling of what such scripts have been since the beginning of cinematic time is entirely appropriate. A screenplay that created complex characters, that put such characters in stories of experiential enlightenment, would detract from the real purpose of the picture. This film wants to join a line as orderly and ordered as the ranks of a military parade. It succeeds. So, schizoid to the core, we can deplore its filmic triteness and its mythology that war is a kind of super Olympics, and at the same time we can enjoy its physical-visual thrills and be privately glad that at least some young people take its standards seriously.