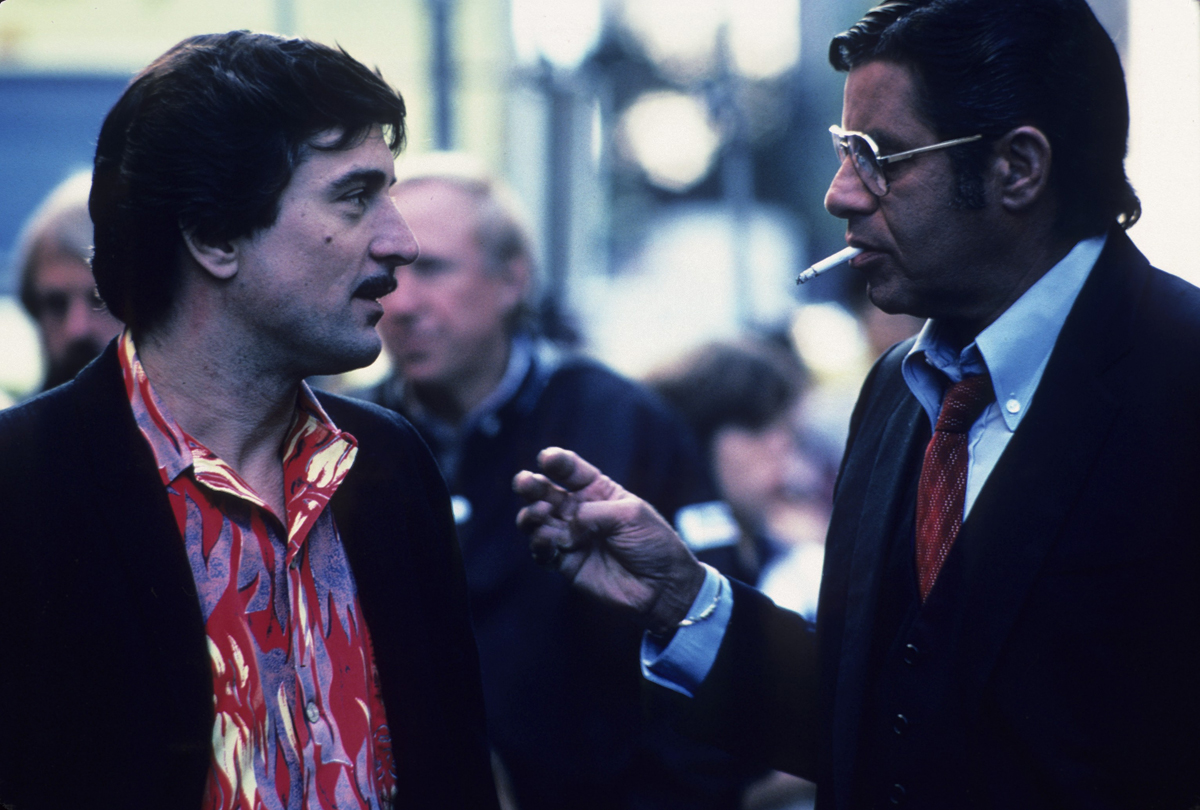 The screenplay of the King of Comedy is by Paul D. Zimmerman, a former film critic of Newsweek. Martin Scorsese, the” director, has usually worked with scripts by himself collaborating with Mardik Martin or Paul Schrader, and most of those scripts have been conceived as naturalistic torrents, meant to sweep us with their turbulence. Zimmerman’s script is a concoction, a match-stick construction naturalistically colored but close in concept to the gimmicky Hollywood and French comedies of the 1930s. This may explain why the picture is virtually bare of Scorsese style, such touches, heavy or helpful, as the opening manhole shot of Taxi Driver or the opening prize-ring sequence of Raging Bull. I saw nothing in The King of Comedy that couldn’t have been done by any competent director. Cinematically, it’s flavorless.

Scorsese’s lack of liftoff here may be due to the nature of the psychopathy with which he is dealing. Yes, his central figure is once again a psychopath, but, unlike his other films, the pretense here’ is that the man is only eccentrically obsessed. Neither Zimmerman nor Scorsese really faced the facts that they themselves put forth in the film, never came near realizing the character they were dealing with. In fact they never create a character, only an immense running gag of gray (not black) humor. No wonder the resultant film makes us feel that, for the first time, Scorsese seems untouched by what he is doing.

Robert De Niro, too, once again Scorsese’s leading actor, seems somewhat hamstrung by the pasteboard ninny he consented to play. De Niro doesn’t need violence in order to be excellent: remember his performance in The Last Tycoon (under another director). But basically he, like Scorsese, seems to have been partly anesthetized by infatuation with the idea of the script and hasn’t perceived that the protagonist, as written, is only an arrangement of actions to make that idea possible.

That protagonist is named Rupert Pupkin: and the name itself ought to have been a warning to all concerned that they were dealing with a self-conscious “little man” attitude. Rupert, apparently in his thirties, is a messenger who idolizes a talk-show host named Jerry Langford. Rupert wants nothing but to be a stand-up comic and talk-show host like Jerry. He, along with others, hangs around the studio stage door. He lives (to judge by one exterior shot) across the river in New Jersey with his mother, and he has furnished the cellar of their house like a studio, with tape equipment, with three chairs —a life-size cutout of Liza Minelli in one, of Jerry on the other side, and a place for himself in the middle. As he fantasizes aloud, his mother calls down to him from above to lower the taped sound effects.

By the time that place and character have been established, the film, intended to be socially surgical, has itself been established: as myopic, false, and forced. At his age Rupert is still a messenger. How intelligent can he be? Much less shrewd and smooth, surely, than he is here. He seems to have all the time he needs at his disposal every day. Then how does he earn a living? Especially, how does he afford the expensive equipment in his cellar and his spiffy, if not tasteful, clothes? On the salary of a messenger who apparently works very little?

Rupert is so pasted together of incredibilities that he isn’t even convincing as the demented person he would be if he were credible. And he couldn’t be lovably pathetic, as intended, even if believable. His persistence isn’t persistence: it’s a mixture of inability to recognize reality and ability to fantasticate. He doesn’t perceive how he’s behaving in Langford’s offices when he tries to see the comic or what is being done to get rid of him. He doesn’t know that his taking a girl out to Langford’s suburban home, after he has persuaded her that they have been invited for a weekend, is psychotic. Well, psychopaths don’t always know of their affliction, even in lucid moments. But this ignorance seems as much De Niro’s as Rupert’s: the two ignorances combine to make the character a puppet. (His last name is clearly meant to suggest that word. Leave the filmmakers out of it: if Rupert Pupkin himself were minimally sane, he would know that his name is ludicrous and would either alter it or exploit it.)

His girl friend, played by the gorgeous and engaging Diahnne Abbott, is black. Would Rupert have a black girl friend? Not likely, in his environment. Would she, a bartender drawn as world wise, have picked up so congenially with a fellow she hasn’t seen since high school and didn’t much like then? Would a smart girl have believed that he had been invited to Langford’s country home, had been asked to bring a guest? Would Langford, whose city quarters are carefully guarded, have no security at all in the suburbs? If Rupert had made a nuisance in the office and then intruded in the suburbs, wouldn’t Langford without hesitation have called the police? And even if he had talked Rupert into leaving, wouldn’t he then have told the police as a precaution, against the sort of action that indeed follows?

Involved in that action is another Langford groupie, a rich New York Jewish girl, a role cast by Scorsese to show, I assume, that he is no slave to film cliché but which shows instead a desperation to give his flimsy script a touch of old-time Scorsese verism. This girl assists Rupert in the film’s climax, a sequence by now so publicized that I’m not spilling any beans. The two kidnap Langford and use a death threat to get Rupert a chance to tape a comedy sequence for the show. Rupert makes a hit, goes to prison, is much celebrated, and comes out after two years to comedy success. (What happens to the girl who was his accomplice? No word about her.) The finish was presumably intended to be wry; a la Preston Sturges; instead it’s mechanically benevolent, like diluted Frank Capra.

Only one moment in the whole picture struck me as truthfully scathing, the tone that apparently was the hope for all of it. After Rupert threatens his way into taping his comedy bit in front of a live audience, he comes out and tells some weary jokes. The audience laughs. I believed that. You can hear almost every night on TV that audience response is conditioned by more than the Applause sign. Has there ever been a comic, however dismal, who came out before a TV audience and never got any laughs? Not in my experience. The audience is as hype-happy as Rupert, is excited by being .there, and seems to feel some deep obligation to do its part. And the only way it can be in the show is to laugh. Responses vary in warmth, of course: the good comics do better than the lesser ones; but an audience never completely lets the show down. That scene of Rupert’s seemed to me valid, so it was the only scene that was satirical.

Faced only with a framework hung with tags, aware of this fact or not, De Niro does his extraordinary best to transform the mechanics into a man. He conveys Rupert’s basic hearing block: the man never really hears the denials, rejections, put-offs that come his way. De Niro tells us this with half-smile, with glinting eyes, with assumed svelte superiority. He also gets the unrhythmical quality of Rupert’s movement and gesture, epitomized in that one TV appearance. De Niro knows that Rupert has studied Langford and other comics, that he thinks he has learned how to do the stuff. But all Rupert has acquired is some of the mannerisms —the Bob Hope run-on, for instance. He doesn’t have central ease, his delivery is a collection of remembered inflections, he hasn’t a clue about what to do with his arms. Because that scene is the best in the script, De Niro, one of our best film actors, is able to blend Rupert’s imitation of professionals and his residual amateurishness into a spot of horror. But the rest of the script, with its faked characterization and flabby dialogue, its unrealized insanity, gives De Niro troubles.

Jerry Lewis plays Jerry Langford, and I’d guess he had a good deal to do with his own dialogue. Now past zaniness, Lewis presents a hardened old pro, quiet, a bit tired, very sure. Would any “straight” actor have been as good as Lewis in this role? I doubt it. Lewis’s life has written the part, and, with Scorsese’s help, he has managed something much harder than it sounds: to be himself.

A chance was missed in this film, a chance that Susan Seidelman grasped in her small-scale Smithereens: to show the harrowings of hype in little lives, lives that might have been much happier if left unteased. The most quoted remark on the subject is Andy Warhol’s line that, in the future, everyone in the world will be famous for fifteen minutes. What’s terrible in that remark is not that it’s possible, not that media of the future may even more ruthlessly exploit and cast aside, but that, in our culture, publicity has replaced sex and even success as the dirty little secret.