Nicole Kidman is dawdling before the mirror, naked except for her eyeglasses and an earring that's giving her trouble. She fusses with it, but languorously, as might be expected amid her gilded surroundings. They suggest the kind of hotel where each room is a scaled-down version of the queen's bedchamber at Versailles. The lamps bathe Ms. Kidman in flattery... 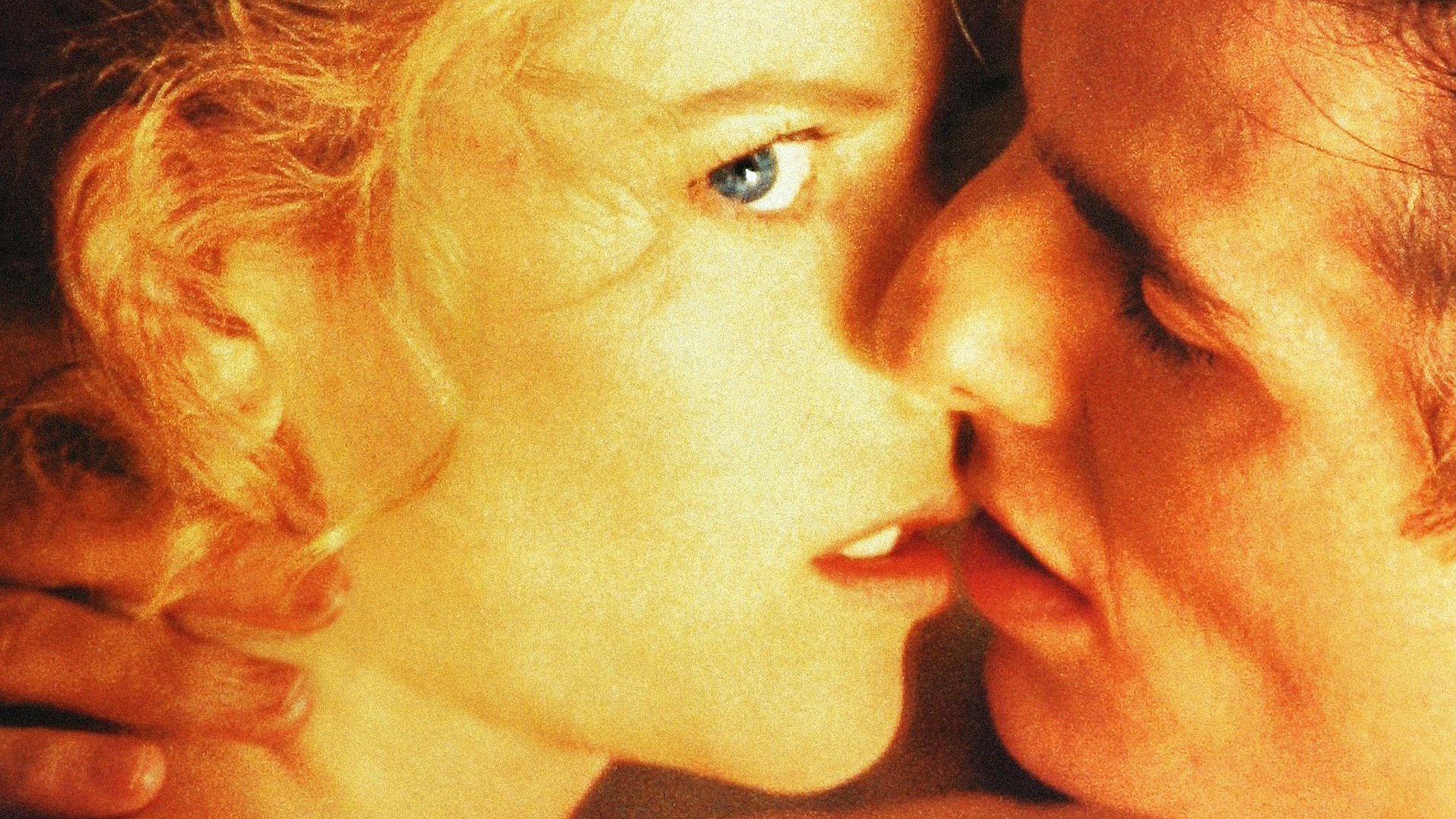 Nicole Kidman is dawdling before the mirror, naked except for her eyeglasses and an earring that’s giving her trouble. She fusses with it, but languorously, as might be expected amid her gilded surroundings. They suggest the kind of hotel where each room is a scaled-down version of the queen’s bedchamber at Versailles. The lamps bathe Ms. Kidman in flattery. The ornate mirror frames a partial view of her front, though the full stretch of her back stands exposed to the camera.

Then come the names, in block capitals and contrasting colors: CRUISE KIDMAN KUBRICK. Three times they flash across the screen, until the camera has come in so far that Ms. Kidman is in close-up, still studying her reflection, and so gazing out to the audience. What is she seeing? Where are her thoughts? EYES WIDE SHUT reads the screen. COMING SOON.

This, presumably, is the last completed work of Stanley Kubrick, who died suddenly in March: the 90-second trailer he made to promote his final feature. Although Eyes Wide Shut will not be seen by audiences until July 16, the trailer has already played to a limited circuit, beginning the slow unveiling that has accompanied Kubrick’s films since 2001: A Space Odyssey (1969) and that has helped each to qualify as ”long-awaited.”

At the news that the wait was ending and these few frames would be on view, I rushed to the screening room. Call it a homing instinct. Kubrick figured among the artists who shaped me; my transformation from egglike moviegoer into a horrible, larval form of critic may be dated to 1963 and a debate with my mother over Dr. Strangelove. Naturally, I felt the pull of my source. Or was the motion more like that of a moth toward the flame? Having assumed adult form, I now scan the trade papers, and so was mindlessly drawn toward the mystery that had flickered around Eyes Wide Shut, as it had around most Kubrick projects.

By Hollywood standards, Kubrick’s pace of production was slow to the point of seeming artisanal. Four or five years would go by between each release, passing in a silence that movie people found eerie. To an industry in which every third person generates gossip for a living, Kubrick was not private but reclusive, not self-protective but secretive. When four years elapsed after the 1987 release of Full Metal Jacket, Variety ran a profile of Kubrick under the heading ”Missing Person’s Corner.” Before the same paper could report that Ms. Kidman and Mr. Cruise would star in Eyes Wide Shut, another four years had passed.

Close to four years after that, Stanley Kubrick completed Eyes Wide Shut and, at his death, had allowed only a handful of Warner Brothers executives to see what they’d paid for. The obituaries and tributes were spread across the newspapers on March 8, the day after his death, when the ShoWest convention opened at Bally’s Las Vegas. One of two major trade shows held each year for theater owners, ShoWest had been chosen for the premiere of the Eyes Wide Shut promotion. Given the chance of an early glimpse of the film (it now has the additional box-office allure of being Kubrick’s last), some 2,000 exhibitors crowded together to watch the trailer, which Warner Brothers had incorporated into a so-called product reel with 16 other coming attractions.

”It was a highlight of the convention,” said Milt Moritz, general chairman of ShoWest. ”There was tremendous enthusiasm.”

The sense of drama extended even to the positioning of the trailer on the reel. Whereas all others were shown in the order of the films’ release dates, from spring through the holiday season, the trailer for Eyes Wide Shut remained unrevealed until the reel’s end.

But what sparked the exhibitors’ anticipation? Were Eyes Wide Shut simply the new Kidman-Cruise vehicle, its trailer would probably not have been held back as a climax. Nor would the rumored possibility of an NC-17 rating, with its attendant limitations on advertising, have been seen as a great marketing advantage, whatever raw curiosity it may have aroused. It took Kubrick’s name to set the film apart — and yet that name may be unknown to many of the ticket buyers the exhibitors hope to draw. In a market where 18-year-olds wield inordinate power, a large group of moviegoers had just begun kindergarten when Kubrick last released a picture. This time, did he wait himself out of an audience?

Milt Moritz doesn’t think so. ”Stanley Kubrick has the kind of name that carries over,” he said. ”He has an enormous amount of recognition.” A leading executive in market research, Tom Borys, seconds this judgment. As president of A. C. Nielsen EDI, Mr. Borys studies the audience for motion pictures, and in his opinion ”a Stanley Kubrick film will be a big deal.” Mr. Borys adds, ”To the opinion-makers.”

As he outlines the results of his company’s latest research, the reason for the qualification hangs unstated in the air. A. C. Nielsen EDI recently polled audiences on what most influences their choice of a film. Among those who go to movies at least once a month — a group that accounts for most box-office receipts — 33 percent named the actors as the most important factor in their decision; 27 percent cited subject matter. (This category would perhaps account for the only other summer film whose trailer alone can cause a sensation — Star Wars: Episode 1 – The Phantom Menace.)

How many people seek out a film because of its director? ”We didn’t ask about directors,” Mr. Borys admits.

Although the omission speaks volumes, Mr. Borys maintains that moviegoers in significant numbers do follow directors ”in certain cases, when they’ve made themselves celebrities.”

Then there are the filmmakers whose fame is paradoxically bound up with their having escaped from the celebrity-spinning machine. ”Terrence Malick would be an extreme example,” Mr. Borys said, mentioning the much-discussed 20-year gap between Days of Heaven and The Thin Red Line. In his view, Kubrick is another exceptional case. ”Real cinema fans, no matter what their age, know who Stanley Kubrick is and will be interested in this film.”

The twist, with Mr. Kubrick, is that the filmmaker himself was both an artist and a hard-working market researcher. He had to be. In the 1960’s, he decided to work as an independent producer-director based in England.

Like many independents, he worried that the company distributing his films might mishandle sales and bookings and misrepresent profits. Unlike most others, Kubrick did something about his worries. By 1972, for example, he had amassed data on the seating capacities of leading theaters in city after city, the better to track box-office reports and root out implausibilities and discrepancies.

Mr. Kubrick’s knowledge of the market is evident in the Eyes Wide Shut trailer — not only in his canny choice of the scene but also in the order of names. The director had enough respect for his own fame and artistry to put KUBRICK on the screen and enough realism to put CRUISE and KIDMAN first.

The same 90-second movie also demonstrates Kubrick’s sophistication in the art of niche marketing. The trailer has been shown to some of the people Mr. Borys calls opinion-makers — exhibitors at ShoWest and invited journalists elsewhere. But as a spokeswoman for Warner Brothers has confirmed, this particular promotion is not destined for wider audiences. It will not be shown as a coming attraction in American theaters.

The story of the trailer would be just another bit of industry lore — gossip of another sort — except for the way Kubrick’s skill at filmmaking tended to blur into skill at marketing. To work at his best, he apparently needed the luxury of time — time committed to penetrating rehearsals, time ground out by take after take of even the simplest shot. In such ways, for purely artistic reasons, a film may become long-awaited and be exploited as such — provided, of course, that the filmmaker is sufficiently famous and the distributor sufficiently powerful.

In other cases, the long wait may result from an impure collision of artistic aspirations, logistical disasters and interpersonal crises. What results, after years of publicity, might be Cleopatra, which the writer-director Joseph Mankiewicz called ”the hardest three pictures I ever made.”

More troubling to me are those cases in which the wait is long and the movie significant but the filmmaker lacks Stanley Kubrick’s fame and contract with an important studio. Between the time that Paul Schrader began screening ”Affliction” and the time he finally got distribution for the picture, more than a year elapsed. Even though Mr. Schrader had written and directed other well-regarded films, and even though a significant number of opinion-makers were impressed by ”Affliction,” there was neither buzz nor build-up during this time spent in limbo. The silence felt less like a marketing opportunity than the threat of oblivion.

That threat has been realized more often than many people in the industry would like to acknowledge, and for filmmakers no less worthy than Kubrick. I remember rushing to another screening room — this one at the Toronto International Film Festival — to see The Cloud, the first film in six years by the Argentinian master Fernando E. Solanas. With his earlier works (Hour of the Furnace, Tangos: The Exile of Gardel), Mr. Solanas had put himself into a very elite group of the world’s filmmakers. Yet the population of the theater that day began at sparse and declined to vestigial, despite the wonders that were being played out on screen. Here was another long-awaited film, but no one seemed to be waiting.

Sometimes even opinion makers have their eyes wide shut.