Coal Miner’s Daughter is a musical bio-pic without hysteria—a sweet-souled movie in a genre known for its flamboyant miseries and luxuriant despairs. 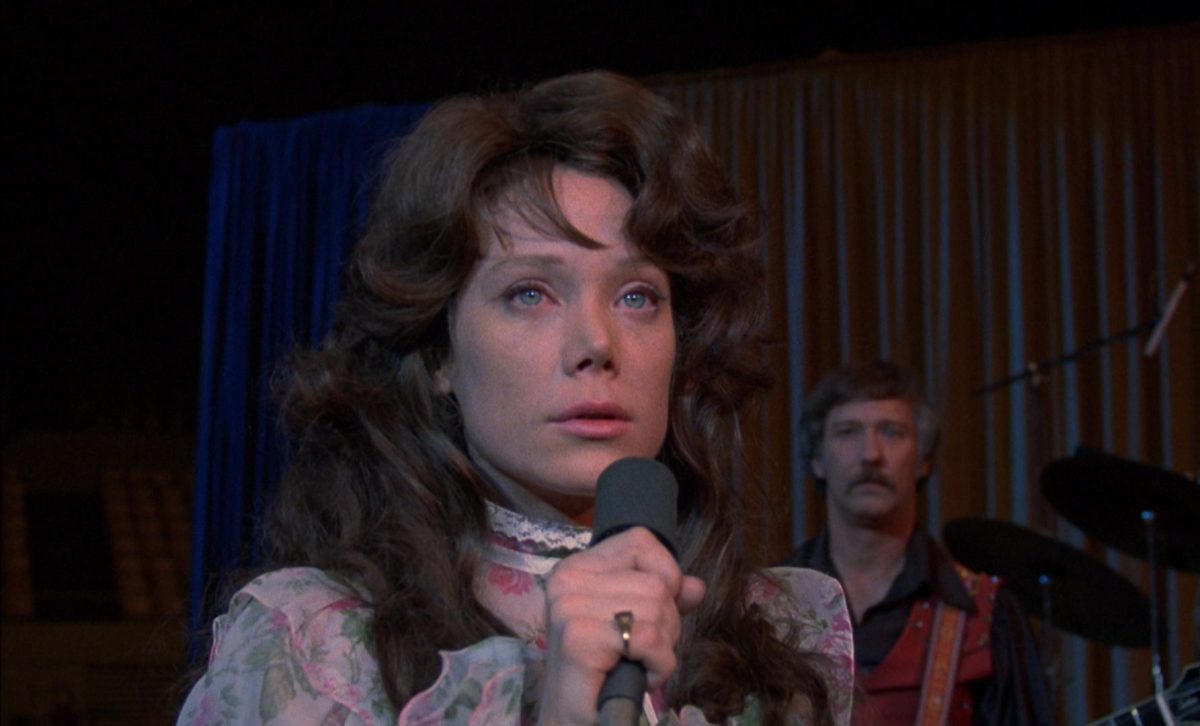 Coal Miner’s Daughter is a musical bio-pic without hysteria—a sweet-souled movie in a genre known for its flamboyant miseries and luxuriant despairs. Based on the funny, ornery, naïvely egotistical autobiography of country-music queen Loretta Lynn (written with George Vecsey), the movie is good-hearted in a simple way that usually embarrasses big-city audiences. Yet I’ve rarely seen so many people smiling contentedly at the screen.

The movie chronicles one of the famous happy marriages of show business: When she was all of thirteen, Loretta Webb of Butcher Holler, Kentucky, deep in the coal-mining country, was successfully wooed by Doolittle Lynn, a hotshot just out of the army. After fathering four children, Doolittle —or “Doo,” as Loretta calls him— pushed his eighteen-year-old wife into a singing career; despite much loneliness and occasional bouts of alcoholic disaffection, he has championed her ever since. The Lynns, who acted as advisers on the production, obviously want to share the lessons of their marriage; their self-love is so humorously unpretentious we can hardly object. Who would deny them a measure of self-satisfaction? Coal Miner’s Daughter celebrates the blessed ordinariness of country-music people—the ordinariness Robert Altman turned inside out in his classic Nashville. This movie, an anti-Nashville, says that country-music stars are really as straightforward as they present themselves onstage. In the end, the simplicity and niceness lessen the movie. Coal Miner’s Daughter is often lovely, but it’s too tame for art.

The director, Englishman Michael Apted (Agatha), and the screenwriter, Tom Rickman, who was born in Kentucky, do their best work in the early scenes, which are set among the back-country people of the Cumberland Plateau. Apted, who has a superb sense of design and mood, knows perfectly well that the combination of scraggly buildings and coal-blackened, worn-out faces, set against a background of great beauty, carries an almost automatic emotional charge, and he doesn’t linger; he doesn’t make poverty picturesque. In passing, we notice the impeccable rightness of the details: Levon Helm (the drummer from the Band) plays Loretta’s exhausted coal-miner father with a lusterless, melancholy voice; her mother is not so much acted as embodied by a woman of heart-stopping beauty, folksinger Phyllis Boyens, who has the broad forehead and lank hair of the mother holding young children to her breast in Dorothea Lange’s most famous Depression-era photograph. In one scene, four or five hungry-looking children sit at a rough wooden table with the yellowish light of a kerosene lamp illuminating their faces and the floral-patterned wallpaper behind them; Levon Helm turns on the radio for the Grand Ole Opry broadcast, and Phyllis Boyens breaks into a kind of heavy-footed stomp—a point of poetic perfection that the movie never attains again.

In the courtship and marriage of Doo and Loretta, the filmmakers are trying to capture something unusual— not a deep sexual attraction but a mutual longing for partnership that is as powerful, as fated, as the greatest of romances. The revelation here is Tommy Lee Jones. In some of his earlier pictures (The Betsy, Eyes of Laura Mars), Jones, shy of acting, ducked his head away from the camera and ran through his lines skittishly, but now he has stopped fighting what he’s doing. A lean, hard-muscled man with rough skin and a flat, pale face, Jones is burdened with an orangy dye job on his hair that makes him look like Howdy Doody, but he turns the hillbilly awkwardness of his makeup to good account—he shows us the animal grace and the shrewdness inside the hick. His sudden, nervous grin, shading off into slyness, says to us, “I’m not as dumb as I look.” One of the saddest and most beautifully managed things in the movie is the way Doo, still wearing his boots and jeans, gets heavy in the gut and vaguely melancholy as he ages. Jones gives him a sweet, sodden dignity that’s immensely touching.

We may not feel as close to Loretta, who isn’t so clearly focused a character. I don’t think Rickman ever figured out what he wanted to say about Loretta Lynn and the relation of her music to her life. We see her singing only once when she’s a kid, and Sissy Spacek, who’s physically very convincing as a thirteen-year-old, doesn’t give her any specific character as she gets older. We’re puzzled when Doo suddenly pushes this mother of four into a singing career. It’s as if he had some flash in the night that his wife was a performing genius and after a short period of reluctance she simply agreed with him. Her drive upward falls in and out of cliché. For instance, she sings to a noisy, indifferent bar crowd which suddenly falls silent in open-mouthed wonder—a standard bit. On the other hand, the next major sequence is startling and funny: As Doo and Loretta drive around Kentucky and Tennessee with her demo single, she strong-arms disc jockeys by breaking into long, exasperated tirades about her life and trials and four children and husband and so on, until, cowed, the poor jerks put the record on the air. But this is the last time that the showbiz details feel fresh. Once Loretta ascends to country-music heaven (with an instant success at the Grand Ole Opry), all is sweetness and light. She has one triumph after another, and everyone is extraordinarily nice to her— Patsy Cline (Beverly D’Angelo), for example, the reigning country-music queen, who feels not the slightest twinge of jealousy and embraces Loretta as a close friend. That shows you, Robert Altman.

To our dismay, the movie falls into a lockstep, utterly predictable—traveling on the road, exhaustion, nervous breakdown, recovery, fresh triumphs. There’s no surprise, no idiosyncrasy, and Altman has ruined us for a movie about the country-music scene without quirks. And we wait for an emotional climax that never comes. Sissy Spacek sings Loretta Lynn’s songs accurately but with little intensity of feeling. Listening to that tiny voice, we can’t hear any pain or joy—as we could in Ronee Blakley’s heart-wrenching work in Nashville. With her huge, unblinking eyes and demon-child freckles and put-upon manner, Spacek comes off as too vague—almost weightless—for the adult Loretta Lynn, who is a very shrewd and complicated woman. The filmmakers establish Loretta’s roots beautifully, but then they fail to show us how she transforms her experience into art, and the movie evaporates into a cloud of pleasantness.