Francis Coppola's Apocalypse Now lives up to its grand title, disclosing not only the various faces of war but also the contradictions between excitement and boredom, terror and pity, brutality and beauty. 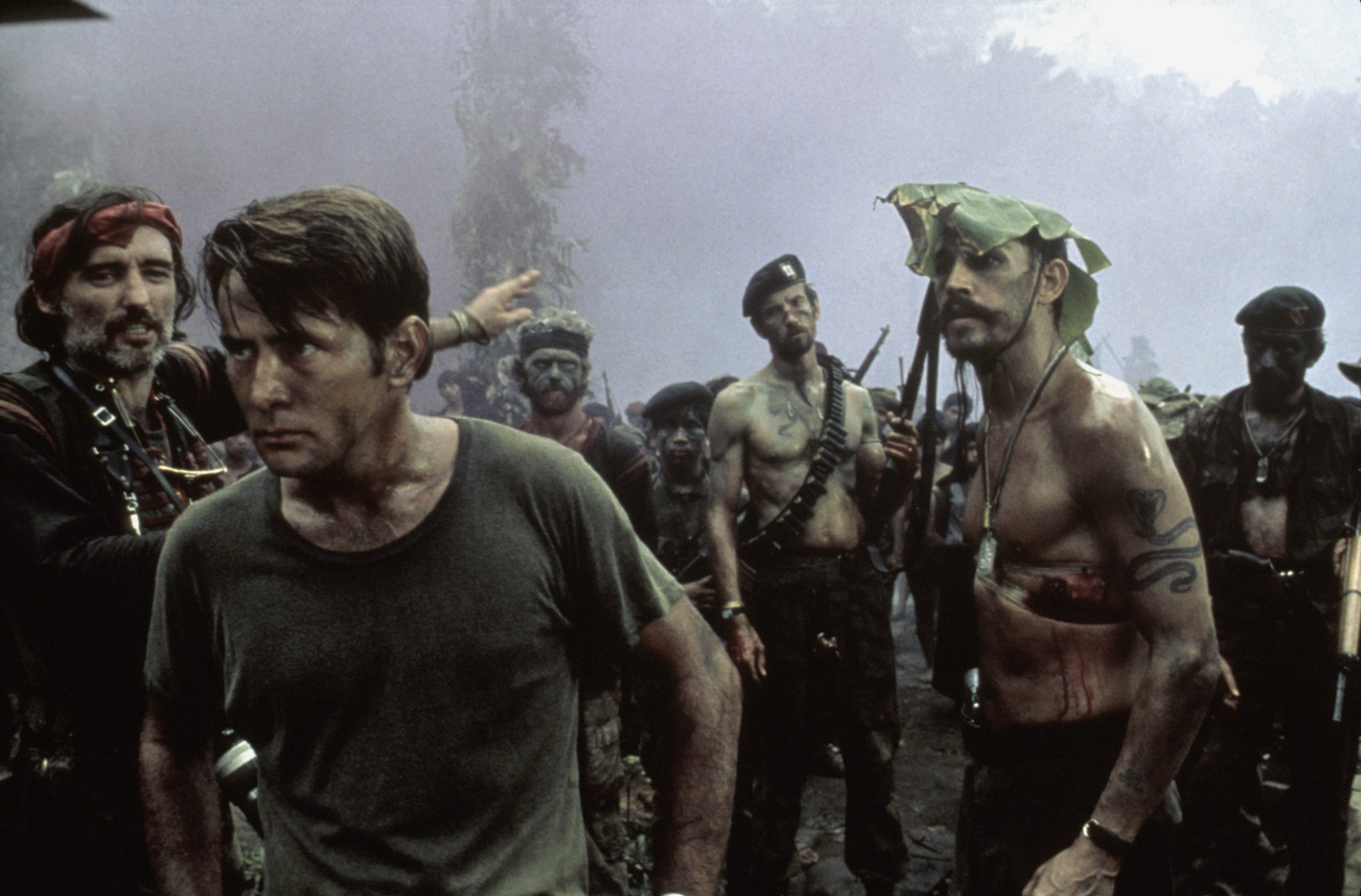 Scene: Day. Jungle. A small United States Army patrol boat pushes its way up a river overhung with dense foliage. The members of the crew make no comment on the burnt-out ribs of an American helicopter that remain stuck in a tree like the struts of a child’s forgotten kite.

Scene: Day. Jungle. The little patrol boat cuts through the water with uncharacteristic speed, drawing behind it an exultant crew member on water skis. The brown-skinned farmers on the riverbank watch impassively.

Scene: Day. Jungle. The patrol boat stops to search a Vietnamese dugout filled with people and produce. Are they friends, enemies, or, as is most likely, simply uncommitted? No way to know. No language to communicate in. A young Vietnamese woman makes a sudden move to protect a particular crate. An American, armed with a machine gun, begins to fire. In several seconds these boat people are dead. The one survivor is a puppy.

Scene: Night. Jungle. The patrol boat, now deep in hostile territory, rounds a bend in the river to come upon a brilliantly floodlit stadium preparing to receive a U.S.O. troupe of Playboy bunnies.

In dozens of such scenes Francis Coppola’s Apocalypse Now lives up to its grand title, disclosing not only the various faces of war but also the contradictions between excitement and boredom, terror and pity, brutality and beauty. Its epiphanies would do credit to Federico Fellini, who is indirectly quoted at one point.

Apocalypse Now, which opens at long last today at the Ziegfeld Theater, is not about any war but about the disastrous United States involvement in Vietnam, which, probably because it was disastrous, seems now to have been different, but was it really? The technology was as up-to-date as the taxpayers’ billions could buy, but everything else was essentially the same. At its confused heart: a fearful hunger to survive. No matter what.

When it is thus evoking the look and feelings of the Vietnam War, dealing in sense impressions for which no explanations are adequate or necessary, Apocalypse Now is a stunning work. It’s as technically complex and masterful as any war film I can remember, including David Lean’s The Bridge on the River Kwai, which comes to mind, I suppose, because both productions were themselves military campaigns to subdue the hostile landscapes in which they were made. Kwai was shot in Ceylon; Apocalypse Now in the Philippines, which became, for Mr. Coppola, his Vietnam, swallowing men, money, and equipment as voraciously as any enemy.

Apocalypse Now, though, wants to be something more than a kind of cinematic tone poem. Mr. Coppola himself describes it as “operatic,” but this, I suspect, is a word the director hit upon after the fact. Ultimately, Apocalypse Now is neither a tone poem nor an opera. It’s an adventure yarn with delusions of grandeur, a movie that ends—in the all-too-familiar words of the poet Mr. Coppola drags in by the bootstraps—not with a bang, but a whimper.

I realize that a movie’s ending should not deny all that has gone before, but almost from the beginning of Apocalypse Now there have been portents that the film means to deal not only with the looks and expressions of war but also with such heavy things as the human condition, good, evil, fate, and various other subjects whose weight, in an earlier century, demanded that they be capitalized.

Mr. Coppola and John Milius, with whom he wrote the screenplay, have taken as their source material Heart of Darkness, Joseph Conrad’s classic story about a mad ivory hunter in nineteenth-century Africa. This shadowy man, named Kurtz, comes to represent to Conrad’s narrator, Marlow, all the terrible possibilities of a soul returned to some precivilized state. Conrad is rather vague about the terrible things that Kurtz is up to. We know only that he rules his local tribes with a bloody hand and charms them with his sorcery. The point of the story is Marlow’s realization that Kurtz is a heretofore unrecognized aspect of himself, which, being known, is safely manageable.

Mr. Coppola and Mr. Milius have attempted to update Conrad, who really doesn’t need updating, by placing this story more or less on top of the Vietnam War. Kurtz (Marlon Brando), whom we meet in the film’s concluding section, is a renegade Green Berets officer who has taken refuge in the Cambodian jungles, where, to the fury of his superiors, he wages his own wars—for and against whom is left blurry—at the head of a group of ferocious Montagnard tribesmen.

The Marlow character is now a battle-scarred Special Services officer named Captain Willard (Martin Sheen), who is assigned by the commanding general to go into Cambodia, find Kurtz, and to “terminate” him “with extreme prejudice.” This plot, which seems to have been imposed on the film from above, keeps interrupting the natural flow of Mr. Coppola’s perfectly sound, sometimes incredibly beautiful, meditation upon war.

The major part of the film is occupied with Willard’s adventures as he travels upriver in the small patrol boat provided by the Army. These sequences are often spellbinding, none more so than one in which Willard and his companions are forced to observe an assault on a Vietcong village by American fighter planes and helicopters under the command of an exuberantly manic officer who’s also a surfing nut. This fellow, played with breathtaking force and charm by Robert Duvall, exhibits most of the qualities we miss in the foolish pretensions of the movie’s Kurtz, whose actions and words, when they finally come, have little to do with the rest of the movie.

From time to time in the course of his upriver odyssey, Captain Willard muses on the nature of the man he seeks—soundtrack narration that makes one’s flesh wet with embarrassment. When we hear Willard say, “Everything I saw told me that Kurtz had gone insane,” it not only fails to establish any bond between the two men, it’s also an understatement to break a camel’s back.

With the exception of Mr. Brando, who has no role to act, the actors are superlatively right, beginning with Mr. Duvall and Mr. Sheen, and including Frederic Forrest, Albert Hall, Larry Fishburne, and Sam Bottoms, who play the members of the patrol boat’s crew. Dennis Hopper, looking as wild and disconnected as ever, turns up briefly at the end as a freelance photographer who has fallen under Kurtz’s spell, apparently because Kurtz reads T. S. Eliot aloud (though none too well).

Vittorio Storaro, who photographed Last Tango in Paris, among other fine films, is responsible for the extraordinary camerawork that almost, but not quite, saves Apocalypse Now from its profoundly anticlimactic intellectual muddle.