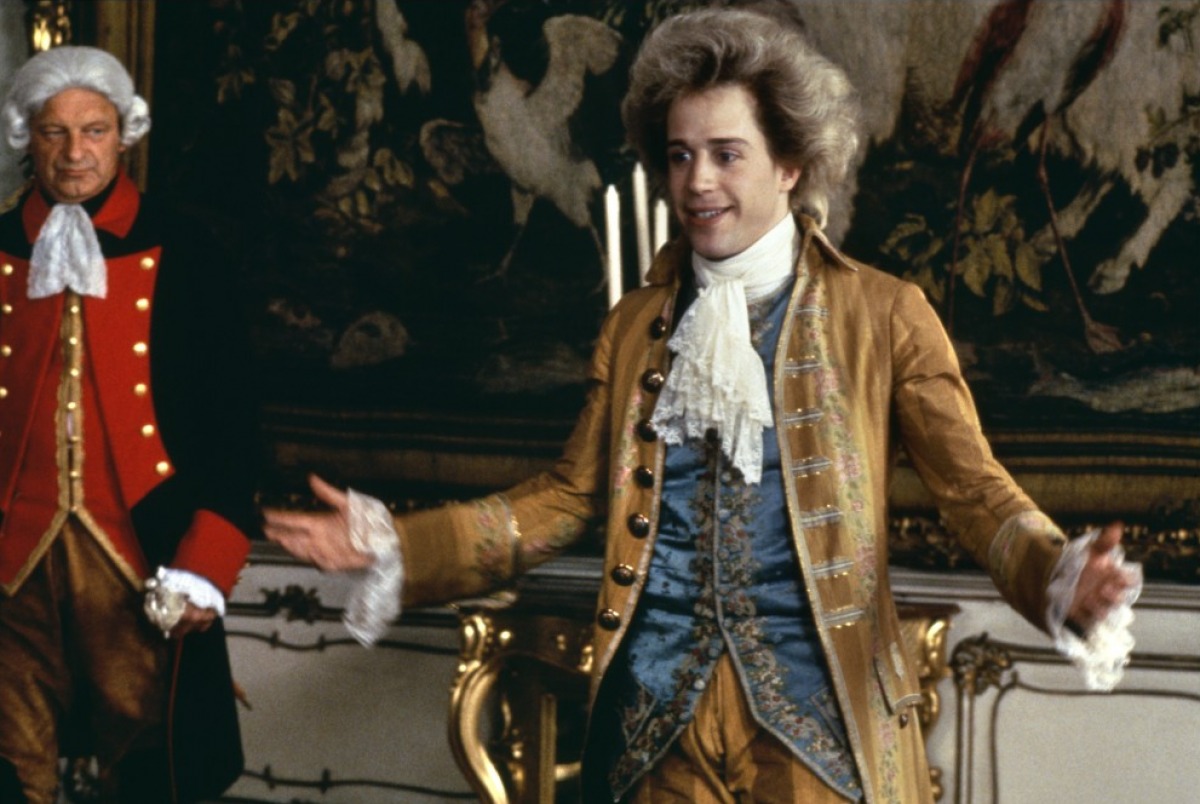 Lucky are those who see the film of Amadeus without having seen the play. Peter Shaffer’s original was markedly different in the London and New York productions that I saw, but both of them used theatrical conceits as if they were virtuosity, when in fact they were padding for a thin body—tricks like an address to the audience and a stylized chorus. Shorn of this spurious décor, the film fares somewhat better.

Shaffer’s screenplay, which was worked out with the director, Milos Forman, is a more straightforward narrative; it goes on too long and heaves toward a dreadfully contrived climax, but in the main it’s a lively piece that tells a story about Mozart and Salieri. Not the story: those familiar with Mozart’s life may die the death of a thousand cuts unless they agree from the start to a romance. Still, that romance is presented here with much less of Shaffer’s undergraduate play writing cleverness, less tinselly rhetoric, and a lot of nice things to look at. With, of course, a great many bits of Mozart’s music —bits only, yet ravishing, more than in the play and played more sonorously. (Those who complain that the music is overrecorded might remember that Mozart liked large orchestras, was happy when he could get them.)

The story takes off from the myth that Salieri, the Viennese court Kapellmeister more successful than Mozart yet jealous of him, poisoned the younger man. (The material was used at least once before in the theater. Rimsky-Korsakoff wrote an opera, Mozart and Salieri, based on Pushkin’s dramatic poem, and Chaliapin was successful as Salieri.) Shaffer’s notion is neither to prove nor disprove the poisoning but to assume that Salieri believes himself responsible for the death, principally because he is so jealous of Mozart. Thirty-four years later, plagued by his obsession, Salieri attempts suicide, and soon afterward dies. In the play the old man recounts the story to us, with flashbacks, as he tries to redeem himself with future generations. This abominable idea is shucked in the film: Salieri recounts the story, with flashbacks, to a priest who visits him in the hospital after the suicide attempt. The wiping off of greasepaint metaphysics—by making the narrative a straight confession-helps immensely.

It would take too much time to dwell on all the liberties with fact. Just a few samples: Where is Aloysia, Mozart’s sister-in-law, so important in his life? Where is the trip to Prague for the premiere of Don Giovanni? (The omission is all the more odd since the film was largely made in Prague.) Why would the Commendatore in that opera, slain father of a violated daughter, be linked in Mozart’s mind with his own father? And-wildest of all—why would Mozart on his deathbed dictate some of his Requiem Mass to Salieri? First, what remains of the score is in Mozart’s firm hand; second, the one composer at the deathbed was, apparently, Süssmayr. But let’s generously allow factual license to Shaffer as we do to Schiller for Mary Stuart and Brecht for Galileo, and see what we get in return for our generosity.

Forman cast the three leading roles with actors relatively unknown in films, but he showed more courage than sense. F. Murray Abraham, long familiar in the theater, plays Salieri and does especially well as the older man. Younger, he tends to make too much of hiding his true feelings; older, he is affectingly resigned to his hell. Still, all through the role, he gives us a man with enough honesty to recognize Mozart’s superiority and to be bitter about his own bitterness.

Tom Hulce comes halfway toward realizing Mozart. The casting idea, as in both theater productions, was to use a young man with a non-ethereal face (supported by several portraits), capable of vulgarity (supported by many Mozart letters), and credible as a genius. Simon Callow, who plays Schikaneder in the film, was Mozart in London and caught it all. Hulce has the energy, gives us Mozart’s complete confidence in his powers even when he is broke, but his face is too doughy—and his voice is insufficiently modulated. He can’t give the role the fineness of inflection and color that it needs.

As his wife, Elizabeth Berridge is disastrous. Constanze was a rough diamond, at least in her young years, but Berridge is a rough rhinestone. Presumably Berridge was supposed to bring the audience close to a just-plain-folks girl. If that’s what she really is, then she can’t even be herself on screen.

Forman has never directed so well. This is a relative statement. Most Czech writers about Forman say that he was better in Czechoslovakia and became ill at ease with American producers; but some of us who saw his Czech films, such as The Firemen’s Ball and Loves of a Blonde, think those earlier works were more clever than good, that his American films were more clever and less good.

Amadeus is not free of middle-European artiness: closeups of repellent guffawing faces, stark shadows, grotesque angles, many masks. (If only some higher power would inspire the U.N. to ban the use of masks in films everywhere and forever.) Still, except for such impossible sequences as the parodic performance of Don Giovanni and the whooped-up climax, Forman shows much more control, more intent to serve his story and actors, than ever before. He balances the picture nicely much of the time between historical appreciation and a view that is touched with a present day satirical edge.

Forman, along with his cinematographer Miroslav Ondricek, was working in Prague as a visiting émigré. Together they have resisted and divulged: they have resisted any temptation to show off their intimate knowledge of the place, while they have divulged some of the secrets of that captivating rococco city. The opera sets in the film were done by the Czech artist Josef Svoboda, widely considered the best scene designer alive, but Svoboda is wasted here because he has little chance to do more than follow neoclassical models.

The fundamental question in the film, as in the play, is the justice of God. Was it just of God to make the scatological, arrogant Mozart a supreme genius, thinks Salieri, while his own decent behavior and hard work are rewarded only with serviceable talent? The justice of God is an old question in drama but, more often than not, is taken as unfathomable in mortal life, to be explained hereafter. (In fact, a whole genre was devised —melodrama—to compress the dilemma and make God’s justice clearly visible at the end of the play.) The muzziness of Shaffer’s exploration is exposed by one question. Would Salieri have been any less jealous of Mozart’s genius if the other man had been conventionally well spoken and modest? The implication is that Salieri is more incensed by bad manners than jealous of genius.

The very close of the film, however, has a power that the play lacked. In the play, the last lines were addressed by Salieri to the audience: “Mediocrities everywhere —now and to come —I absolve you all! Amen!” He raised his arms and we heard a beautiful bit of Mozart. It seemed both presumptuous and self-exculpatory for Shaffer. In the film we, the future, are left out of it. Salieri is being wheeled down the corridor of the hospital through a crowd of lunatics chained to the walls, and it’s to these lunatics that he speaks those lines. This gives irony, not impertinence, to his act of absolution. And the final sound is not Mozart’s music but Mozart’s high-pitched, irritating giggle. That’s good.