With the Jaegerists now in charge, Zeke's master plan is revealed. But before it is put in motion, Eren recruits help to flush out any invaders in their midst. 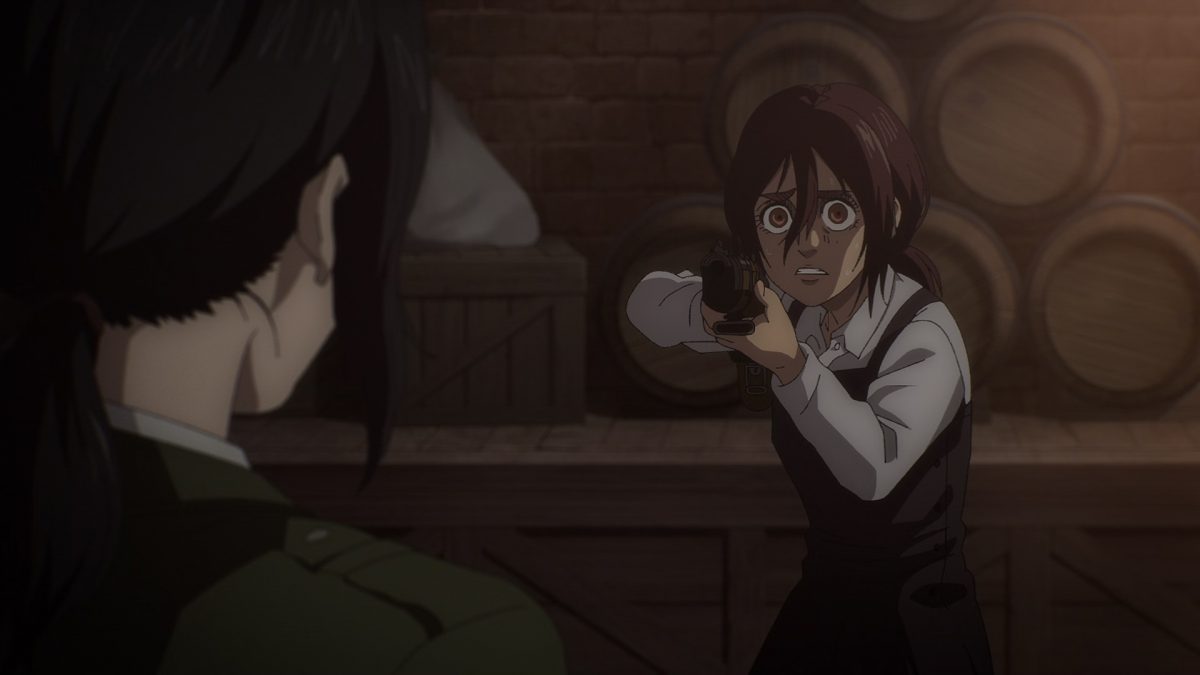 Let’s head in that direction.

“We’ll dine at the same table again soon.” Hasn’t it happened just like I said, Commander Pyxis? I appreciate your swift response. You gathered all soldiers in Shiganshina and forbade opposition like we asked.

Given the spinal fluid, we didn’t have much choice. Only Shiganshina was evacuated, and we could become Titans at any minute. In any case, what else could I do with comrades pointing guns at my back?

I’m sorry, Commander. My son and I both drank the wine.

Since when did you betray–?

There’s no need to answer.

It seems switching sides sooner came with advantages. That white armband you wear so proudly is proof you’re a Jaegerist, no? Red must be for those who learned they drank tainted wine and were forced to comply. The rest of us fools who drank the wine without knowing a thing are identified with black. Sounds like how Marley does things. Didn’t they do something similar when they took over your homelands?

We can learn a lot from our enemies.

Such as how to make more of them.

Was it not your people who refused to side with us?

That said, considering we failed to trust guests who served us tainted wine, does that make us foolish or wise?

You were both foolish and wise. If you had trusted Zeke and us from the start, the world might be saved by now.

Hmm? “The world might be saved”? I was under the impression your plan was to reunite Zeke and Eren for a small-scale rumbling to keep other nations at bay for the next 50 years. Won’t only the island be saved?

It’s too late. Zeke gave you plenty of time. And you answered his mercy by planning to kill him. Zeke is the god who will save the world and you’ve earned his wrath.

So? All we can do is sit here while it all plays out?

Armin, could you bust out of here as a Titan?

No. I’d just destroy the city. Unlike Eren’s Titan, the Colossal Titan can’t do something that precise.

So? Why did Eren beat you to a pulp? It’s about time you tell us.

He said hurtful things to Mikasa. I swung at him and he hit back.

Huh? He hurt Mikasa? How?

No, it’s not. What exactly did he say?

Forget it, Jean. We already know he’s a total piece of shit. Now he’s lost his mind and hurt the two people he should care about most.

I think if he was sane, he wouldn’t do it without a good reason. Do you think there’s some sort of meaning behind it?

Long time no see, heroes of Shiganshina. It pains me to reunite in a place like this.

That’s a lot to ask, considering you guys put me on house arrest. Just sit quiet and behave until Zeke and Eren meet.

You…! Must be nice, Yelena. Everything went exactly how you planned. Through you, Eren moved how Zeke wanted. Raiding Marley, getting people’s support, using wine to take over the military… Now, Eldia and the Founding Titan are yours. You can crush Marley and avenge your homelands. Isn’t that the real reason you came to the island?

This place was primitive. We brought it out of the past.

So you and your pals could enjoy it. Once you ruled, that is.

You were tricked and lost. That’s all it is.

Greiz! Looks like you sold us out to get promoted to Yelena’s lackey, you snitch!

Are you dumb? It’s you who sided with the devils and betrayed us!

You had the hots for some devil spawn who reeked of potatoes!

You wouldn’t shut up about her, day and night. Stupid me thought you’d get a grip when the bitch died.

I’ll make it easy to understand. That spawn-of-the-devil whore was–

I apologize for his disrespect. This island has no need for those who would call you devils. Believe me, our true goal is nothing as hollow as getting revenge on Marley. Our goal is to end the cycle of hatred to save Eldia and even Marley. No more secrets. I’ll tell you everything– about Zeke’s plan to save the world: His “euthanization” plan.

What do you want?

If you wanna save Falco, help me.

Call for help on the radio to flush out intruders in the walls.

“Information Available for Public Disclosure” “Shiganshina District” “The fortified residential district of Paradis Island where the Operation to Retake the Founding Titan began in 845. In the five years following the Fall of Wall Maria, it was inhabited by Titans. However, with the operation’s failure, the hole was plugged by Eren Jaeger and the current state of the district is unknown. The primary goal of the new strategy is for the Cart Titan and Jaw Titan to infiltrate Shiganshina, the southernmost district.”

Gabi, aim the rifle at Eren. Gabi! Eren, hands out of your pockets.

And what if I refuse?

I pull the trigger and your brains hit the floor. Ever seen it? No time to transform.

And? Why don’t you pull it? If not, why else are you here? What happens if I don’t listen?

That’s something you’ll never know. Once your brains hit–

I do know. You won’t shoot. You aren’t allowed to kill the Founding Titan. Your orders are just to retake it. But for that, you’ll have to turn into a Titan and eat me alive, right?

Gabi, take your finger off the trigger.

You’re not the only one who would pay for defying the military. Your family in the zone would, too.

Yeah, I won’t shoot. And eating you doesn’t seem possible either, so…

You found my Titan footprints from when I invaded, right? I thought I did well sneaking into your midst without being caught. But I have other reasons for not shooting. If you used the Founding Titan’s power, couldn’t you defeat Marley? You wouldn’t make the world your enemy unless you knew you could win. Do you have something more than the Founding Titan?

Pieck, what are you…?

Gabi, put down the rifle.

Supposing I did, what’s your goal?

To free all Eldians in Marley and around the world. I want to free my family in the internment zone. I became a Warrior to get my dad, my only family, proper medical care. He survived, but he’s incredibly sad knowing my term will soon be over. Before I die and leave him behind, I want to show him Eldia has a bright future. For that, Marley needs to be crushed. I’ll help however I can. If we can slaughter Marley, I’ll do whatever it takes.

The mastermind of the attack on Marley… was Zeke. Now, you? What have we been fighting for?! Once the world knows that we’re good Eldians, won’t they let us go free?! You’re the same as Zeke–a traitor!

Gabi. Are we Marleyans or are we Eldians? What do you think?

Wrong. We are Subjects of Ymir. That’s the one truth we can’t escape. No matter what we’re called, we’re a race that turns into Titans. But like we saw at Fort Slava, Titan power is on its way out. As soon as Marley can’t use us, they’ll slaughter us all. Even if we prove we’re “good Eldians,” there’s zero chance that we’re freed. We have to secure our right to live with our own hands.

Prove it. If you’re going to cooperate with us, show us you mean it.

I’ll show you where my comrades are.

If we go to the roof, I can point out where they are.

Stop children from being born?

Correct. That’s Zeke’s euthanization plan. All suffering brought about by Titans will disappear from the world. Gradually. Peacefully.

Wait. How is that peaceful? If Subjects of Ymir slowly die out, we’ll only have geezers to defend in the end. How do we protect ourselves? You think they’ll leave us alone?

The rumbling can serve as a deterrent as long as the Founding Titan and the royal bloodline are preserved. Fortunately, Queen Historia was blessed with an heir. As long as Subjects of Ymir inherit the Founder until her child passes away…

Sure things… Certainties… No nation can claim to have them. Each one has its own share of problems. But there is one certainty, and that’s the threat of Titans. Their history of tears and bloodshed will be put to an end… by Zeke and Eren. I don’t know how long humanity will last, but it’s hard to think that a greater feat will ever come to pass. People will speak of the brothers as legends for millennia to come. Like the gods of the past. Even after their deaths, they’ll be seen as saviors who shone over humanity.

No… But to think your cause was so noble… It touched my heart!

–The enemy’s here! –Someone was killed!

–What?! –Did she betray Marley?

Hmm? What’s all the ruckus about?

Is it safe to say you and I are allies now?

If you can point out the other invaders. Until then, you’ll be cuffed to the Marley kid. If you try to transform, she’ll bite the dust.

Don’t worry. This kid will come around soon enough.

–That bitty thing is a Marley soldier?

–She’s an ally? –That bitty thing is a Marley soldier?

Hey… Where is Falco?

Falco’s here, too. But it seems he drank some of Zeke’s spinal fluid.

Who knows? They’re saying the wine with spinal fluid got in his mouth.

I see. You took over the military with Zeke’s spinal fluid. Do you know why Zeke even has an ability like that?

Beats me. Do you know?

No. Other than Zeke himself, nobody does. Ever since I met him, I felt like Zeke was telling lie after lie. Four years ago, I confirmed that hunch. Only with you did his words seem true. “Believe me, I know what you’re going through, Eren. Someday, I’m coming back to rescue you.” If anyone, I thought he’d tell you about his secret power. For example, like it can draw out the Founding Titan’s power or something.

Oh? You shaved your beard? I thought it suited you.

Eren, it’s not safe to trust that woman.

Yeah. I don’t trust her, either, but it’s mutual.

By the way, aren’t you using the Founding Titan’s power? Where’s Zeke?

You’ll find out soon enough. Show me. Where is the enemy?

It’s begun. The Titans… have started to move.

I knew it wouldn’t be easy.

Pieck! You’re not a traitor?!

Gabi! You thought I’d sell out my comrades?

But you said we have no future fighting for Marley!

Look. I don’t trust Marley. But I do trust the comrades I’ve fought alongside.

There’s the smoke signal. Pieck and Galliard have exposed his location. It’s the Founding Titan. Go get revenge for Liberio! Let’s put an end to this guy. 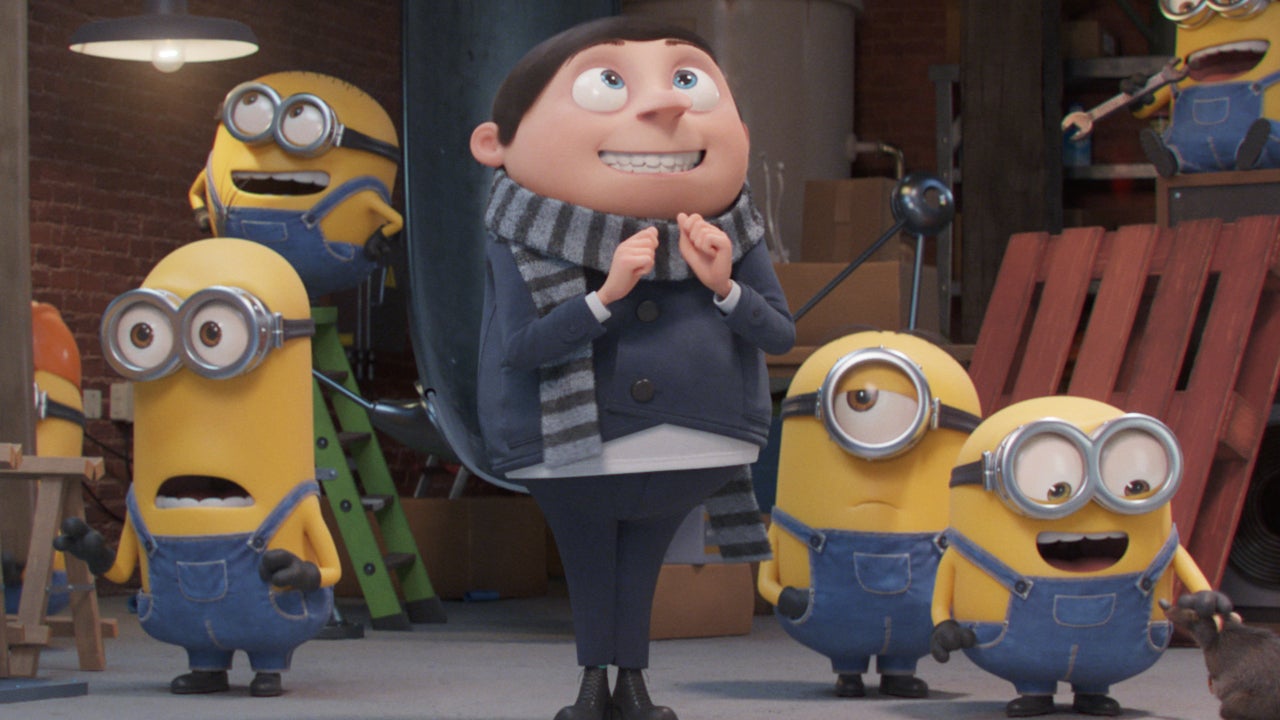 The untold story of one twelve-year-old’s dream to become the world’s greatest supervillain.