WHEN MARNIE WAS THERE (2014): HOUSE OF THE SPIRITS – By Nick Bradshaw

Hiromasa Yonebayashi’s When Marnie Was There transposes a classic of English children’s literature to modern-day Japan to tell the tale of an orphan discovering the dark secrets of her past, in what might well be the last in-house feature from the great animation house Studio Ghibli

Hiromasa Yonebayashi’s When Marnie Was There transposes a classic of English children’s literature to modern-day Japan to tell the tale of an orphan discovering the dark secrets of her past, in what might well be the last in-house feature from the great animation house Studio Ghibli

Joan G. Robinson’s 1967 children’s classic When Marnie Was There – the story of a solitary and brooding London orphan called Anna who is sent to stay with family friends for a summer on the north Norfolk coast, where she encounters a kindred spirit called Marnie living in the mysterious Marsh House – now comes with a post­script appended by Robinson’s daughter Deborah Shep­pard in 2002. In it Sheppard relates the story of a Japanese man, a fan of the book since his youth, who had ventured out on the same coastal bus ride as Anna in hopes of making a pilgrimage to the story’s setting of Little Over­ton. None of the man’s fellow passengers had heard of the village, however, and he was beginning to get rather anxious when the bus drew into Burnham Overy, and he recognised the very windmill that haunts Marnie’s imagination – and then too the Granary which Robinson fictionalised as the Marsh House, and the marsh path to the beach where Anna and Marnie make their magical trysts. (Sheppard describes him even managing to find a local Japanese resident, who kept in touch and later de­livered him a photo of Robinson.)
Given that Japan’s Studio Ghibli has now adapted Marnie at the behest of Miyazaki Hayao, the great ani­mator known for his love of both European landscapes and classic children’s literature, one’s fancies wander. Could this pilgrim possibly have been Miyazaki-san? After all, Marnie appears on his list of 50 great children’s books shortly after The Borrowers (adapted at Ghibli as Arrietty in 2010 by Miyazaki’s former key animator Yo- nebayashi Hiromasa) and The Little Prince (an influence on Miyazaki’s 2013 film The Wind Rises). According to Yonebayashi, who was also tasked with the adaptation of Mamie, the answer is no – but the book’s Japanese trans­lator did know the man, and Yonebayashi had heard of the episode and even seen photos the man had taken of Burnham Overy.
Yonebayashi’s Marnie moves the story’s present tense to modern-day Hokkaido, Japan’s northern island, but otherwise takes fewer liberties with the moods and meanings of Robinson’s text than, say, Miyazaki did in his 2004 adaptation of Diana Wynne Jones’s Howl’s Moving Castle; Marnie even remains a blue-eyed blonde, to Miyazaki’s reported consternation. Like Arrietty, it’s dramatically discreet, without the madness of Miyazaki’s fantasias, but rich in visual detail, and steeped in Ghibli’s reverence for the power of nature: the trickiness of the light, the wilfulness of the sea. Where Arrietty was built around relativities of space and scale, with its characters living among insects and hiding from towering humans, Mamie remoulds time, transposing us through eras to re­connect with our late ancestors’ experiences and stories: both the 50-year-old book itself, and the lives it reaches back further to remember.
All of which makes it, if not Ghibli’s very finest hour and 43 minutes, then certainly a wondrous and heart­felt keepsake, a bequest from a legendary studio now in a state of suspension. Only in 2014 had Marnids then 37-year-old producer Nishimura Yoshiaki, also justly credited with steering the intractable Takahata Isao through the interminable production of his The Tale of the Princess Kaguya (2013), been nominated as heir to Ghib­li’s founding producer Suzuki Toshio. But as confirmed in the fleeting interview I got when Nishimura and the 42-year-old Yonebayashi passed through London last October, both men have since left the building. Whether they jumped or were pushed by a sceptical hierarchy is not clear, but their departures follow that of Miyazaki’s son Goro, who after directing Tales from Earthsea (2006) and From up on Poppy Hill (2011) moved on to the broad­caster NHK to direct a CG cel-shaded anime series based on Astrid Lindgren’s fantasy book Ronia the Robber’s Daughter. As with Michael Dudok de Wit’s The Red Turtle, which has just premiered at Cannes (see page 35), Studio Ghibli co-produced that series. Miyazaki is also promis­ing to direct more shorts for the Ghibli Museum, but it seems highly probable that, in terms of the studio’s unparalleled three-decade run of in-house feature animations to treasure, Marnie will be the studio’s final gift to the world.

Nick Bradshaw: Your film follows a story about finding a refuge from the metropolis, using geography as a route to an alternative world and way of life. When did you first read the novel and what did you think of it?

Hiromasa Yonebayashi: It was a very absorbing and moving tale, but I thought it would be really difficult to make, because the story is mostly written as a depiction of Anna’s internal thoughts and feelings. It was difficult to think how to visualise that. Actually Mr Suzuki asked me to work on the book, and initially I said, “No, it is too difficult,” and turned him down.
But I thought about Anna and Marnie and came up with the scene when they dance, which isn’t in the origi­nal novel. Or the set-up with Anna as a girl who draws: that wasn’t in the novel either. As I came up with these I was beginning to convince myself that it could be a beau­tiful story.

NB: Turning her into a visual artist gives you more access to her in a visual medium.

HY: Of course, we could just have resorted to a mono­logue, but because I’m an animator, I wanted to express her thoughts through her actions. The pictures she draws, and even the way she draws – her physical posi­tion and everything – reflects her mind and soul. But yes, that visualisation was very difficult.

NB: This is your second adaptation of an English children’s classic, following Arrietty. Is that a special relationship for you?

HY: It’s because Miyazaki likes English children’s classic literature. He chose the book and I was given it by Suzuki, the producer, and read it. Of course I enjoyed and was moved by Arrietty’s source novel [The Borrowers] too, and its central theme is something adults can relate to as well. And because this is children’s literature, the ending isn’t going to be like a disaster; there is hope at the end. That’s how Miyazaki likes it too. And I liked the way it ended. A disastrous ending is not only hard on an audience, but on the creators as well.

NB: I found the visual styling very evocative, particularly in terms of place and interiors as expressions of states of mind. For example, Anna’s bedroom in Sapporo conveyed a strong sense of the present and what life might be like for a girl in such a city now, and that helped to make the contrast with the sense of something different in the countryside.
It’s not something a Miyazaki film would dwell on. I won­dered if you were conscious of any attempt to do anything different in visual terms, or develop the Ghibli house style?

HY: I’m glad you noticed because the background is very significant. It was important to depict Anna indoors: when you see her in her room you can tell what kind of a person she is. And when she enters her room in the country house, it was important that you can see people who lived in it before she moved in. And I took a lot of care to show a difference between the Marsh House past and present.
Scenery also depicts Anna’s mood and state of mind: the sky, water or wind. In the novel there is a phrase: the sky is described as grey as a pearl. I interpreted that as an image of Anna’s soul. Ghibli’s films usually have blue skies and white clouds, whereas in this film the sky is cloudy all the time. So there’s a difference.

NB: What can you tell me about your hopes and plans for the future, and the shape of Ghibli at this point?

HY: I made Arrietty and Marnie as sort of static films as opposed to dynamic films. So in the future I’d like to make a fantasy film where the characters are dynami­cally moving.

Nishimura Yoshiaki: You should really ask Ghibli’s public­ity department about the future of Ghibli. But so many animation directors are influenced by the studio that for myself, probably there will be work, feature films, to make with those directors and for the legacy of Ghibli. But whether or not it would be released as a Ghibli film I really don’t know because at the moment Ghibli has de­cided not to make any more feature-length films.

[Here the translator intervenes to point out that both Yonebayashi and Nishimura have already left Ghibli; Nishimura has set up his own company – Studio Ponoc.]

NB: I’d like to see a film set in the Studio Ghibli offices now, in their current state of suspended reality. It sounds an in­teresting environment in itself.

HY: Sorry; that would be up to Miyazaki and Suzuki… 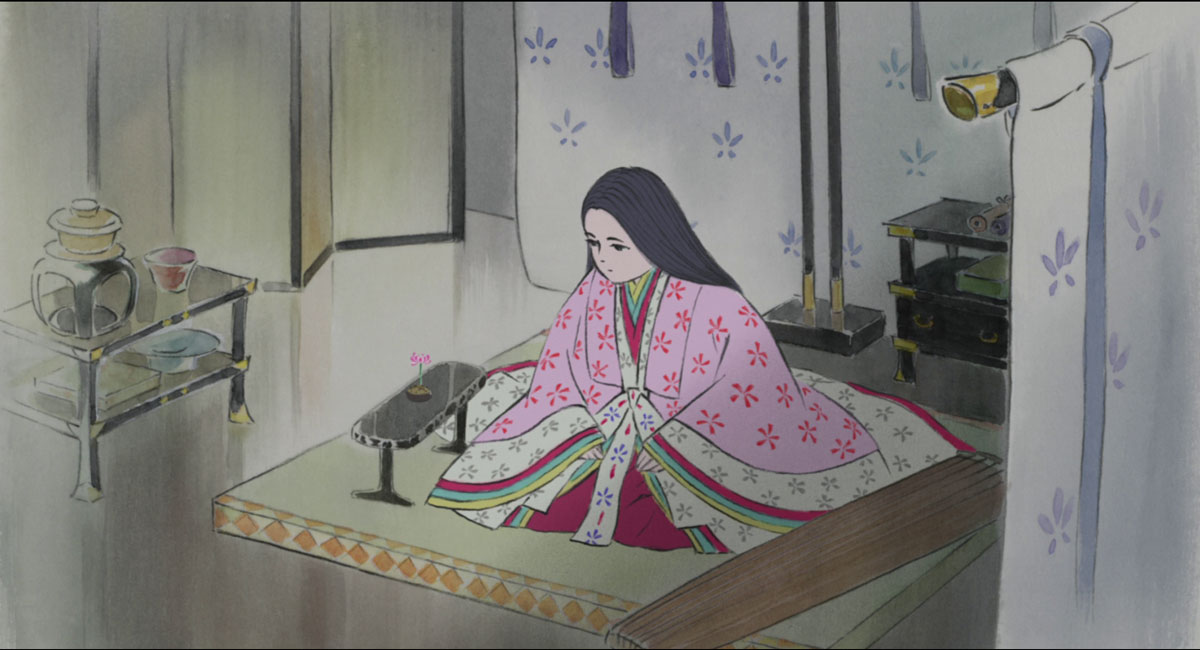 Based on the Japanese Folktale “The Tale of the Bamboo Cutter”. A bamboo cutter named Sanuki no Miyatsuko discovers a miniature girl inside a glowing bamboo shoot. Believing her to be a divine presence, he and his wife decide to raise her as their own, calling her “Princess”.

LAST TANGO IN PARIS: THE UNVISITABLE PAST – Review by Julian Jebb [Sight and Sound]

In Last Tango there is a quite plain idea—it’s very nearly a film with a message: sex as an instrument of power divorced from tenderness or curiosity results in chaos and despair.