Essentially, Ran is about color and pattern, the formality and pageantry of warfare, and the fun of melodrama. 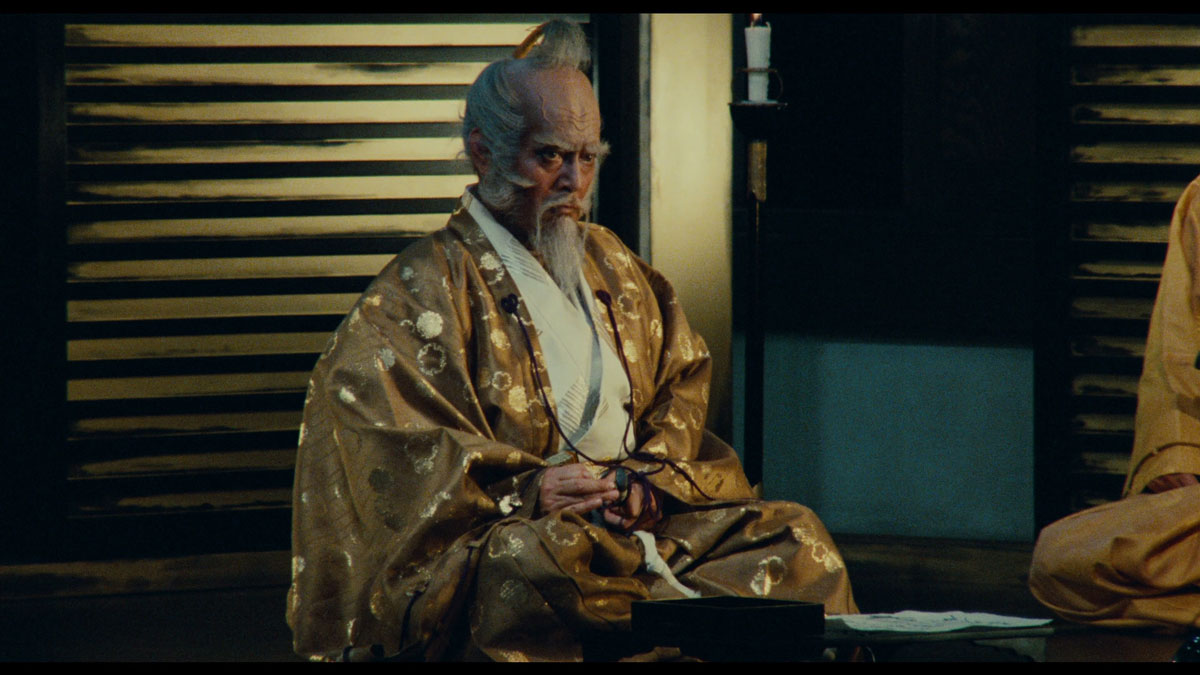 Kurosawa has said of his epic spectacle Ran that it is “human deeds as viewed from heaven,” and the film gives you the feeling that you’re looking down from a great height. Even its fiercest battles are serene, as if preordained. In the publicity, the Japanese word “ran” is defined as “chaos,” but that’s a loose translation. “Riot” or “war” or “uprising” would be more like it, and in terms of the film’s emotional tone this fighting is seen from a detached point of view. Kurosawa says that his primary influence in the work (which he had been planning—and trying to finance—for nearly ten years) was the legend of a sixteenth- century warlord who retired to live in peace after dividing his lands among his three devoted sons. Kurosawa turned the legend upside down to demonstrate that a lord who achieved his wealth by brutalizing everyone who stood in his path couldn’t retire and have a tranquil old age—that at the first sign of weakness he’d be a target. Then Kurosawa thought of King Lear, and it’s clear that he drew from Shakespeare’s characters and plot. But without Shakespeare’s language this warlord Lear isn’t a towering figure with raging emotions. Viewed from heaven, he’s just a speck, like everyone else. As Kurosawa presents him, this lord has no psychological interior; he’s a symbolic figure—almost a puppet. And this Lear, the seventy-year-old Lord Hidetora Ichimonji (Tatsuya Nakadai), has earned every bit of his punishment. Ran is like Lear as a silent film unfolding inexorably. In a massacre at a fortress on the slopes of Mt. Fuji, where Hidetora sees his retinue and his concubines butchered by his own sons’ troops, Kurosawa cuts off the noise of the flaming arrows and the cries of the warriors and their victims; the carnage is a horror show, an elegiac ballet with no sound but Toru Takemitsu’s harshly poignant music. The imagery here is suddenly fluid, with warriors running this way and that in flattened perspective—they’re like a winding river on a Japanese screen.

In 1954, when Kurosawa made The Seven Samurai, he was perhaps the most dynamic (and Shakespearean) of all moviemakers. The Seven Samurai is an action film; its spirit is unruly—it’s about what can’t be tamed. But now he shows no interest in dynamics. (People go on writing that he’s the most Western of Japanese directors, but that hasn’t been the case for a long time.) Ran is about action—action viewed pictorially from a godlike distance—and for its first forty minutes or so the picture seems dead. It still has two hours to go, though, and I found myself becoming attuned to its magisterial style, and the measured preparation for the choreographed scenes, with their color-coded troops. Yellow banners designate the soldiers of Hidetora’s eldest son, Taro; red banners are for the middle son, Jiro; and blue for the loyal, if brusque and tactless, Cordelia figure—the youngest son, Saburo. The film is a totally conceptualized work—perhaps the biggest piece of conceptual art ever made. Kurosawa doesn’t want to drag us into the muck of battle; he’s absorbed in logistics—in the conceiving of the shots. The brilliant colors on the performers and the clarity of these tones against enormous landscapes make the figures look helpless, miniaturized. They’re easy targets for each other; you might say that they dress as targets—certainly the soldiers do.

Kurosawa’s approach has its flaws and its peculiarities. That long opening that makes you drowsy is a heavy dose of preparation, and there are too many sequences where you wait for the point—such as the scenes with Jiro’s wife, Lady Sue, a peaceful Buddhist in pastels and floral prints, and those with her blind, flute-playing brother. And Hidetora’s honest and loving Fool, Kyoami—played by a glamorous transvestite pop singer, who is known in Japan simply as Peter—wears a version of motley that suggests pajamies, and prances about in a way that is probably supposed to indicate freedom but comes across as wholesome and self-conscious. Kyoami is like a well-heeled, serious-minded college girl dressed as a clown for a charity benefit, and the sexual ambiguity is puzzling, especially since no one on the screen appears to notice it. (This Fool and this Lear just don’t go together, though we get the idea that Kurosawa, at seventy- five, may see himself as half one, half the other.) In the early scenes, at a boar hunt where Hidetora announces the decision to divide his property he is painted to resemble a demon, and later, when he has gone mad and the violent acts he committed come back to haunt him, his scraggly white hair and red-rimmed eyes suggest a sorrowful scarecrow. Hidetora’s painted, masklike appearance (with its evocation of Noh drama) might be affecting in its own terms if the externals of the Lear story didn’t set up expectations—for Western audiences, at least—of Lear’s depth of suffering and Shakespeare’s burst of passion. As the role is played, Hidetora is rash but so paper-thin that he doesn’t seem capable of the blood lust he must have had when he struck down whole families and gouged out a child’s eyes. (It was he who blinded Lady Sue’s brother.) Tatsuya Nakadai’s Hidetora doesn’t suggest the ferocious past ascribed to him, and he doesn’t move like an old man, either—he’s a painted actor impersonating a stylized figure of tottering old age.

Shakespeare’s Lear is about primary emotions. Lear is attacked by those he never harmed; he stands for every undeservedly abused parent figure who believed in his children’s show of love for him. Hidetora is the victim of his own misdeeds. He and his dynastic plans for the House of Ichimonji are undone by a vengeance planned by his son Taro’s wife, Lady Kaede (Mieko Harada), whose family Hidetora wiped out. Essentially, Ran is about color and pattern, the formality and pageantry of warfare, and the fun of melodrama. Very still and seemingly passive, her eyes modestly averted, Lady Kaede is a demon whose every breath is devoted to the destruction of the Ichimonji. And though this plot element diminishes the meaning of the Lear story as we know it, it has a pragmatic appeal (Kurosawa is saying, “Hey, a big lord like that didn’t get where he is without stepping on toes”), and it gives the movie some nasty, sexual peppiness.

With the director’s having planned virtually every shot in advance, the actors don’t have much room for creative participation. (That’s part of what makes the early section seem dead.) But Mieko Harada, per­forming in the stylized manner of Isuzu Yamada’s Lady Macbeth in Throne of Blood and Machiko Kyo in Rashomon, has the chance to play a perfectly behaved wife who hides her feelings under a demure expression. She’s the only character who gets to pull us in, and there’s some theatrical charge and comedy in seeing that what’s inside her is pure hatred. She draws blood and kicks the plot forward. (Women viewers may be more likely than men to register that Lady Kaede can hold to her plan of vengeance against the Ichimonji clan because she has no children.) The actress’s finest moment is also a triumph of the sound engineer: having become Taro’s widow, Lady Kaede glides across the floor on her knees, her silks rustling and hissing, as she moves to seduce Jiro.

At the climax, when four color-coded armies, with their plumes and armor and insignia, are poised on the landscape, you’re seeing the conception. The whole movie has been pointing to this setup. And the fastidiousness and the monumental scale of what Kurosawa has undertaken can flood you with admiration. The conception is not one that lends itself to the movies, but he’s carried it out anyway. He has done what he couldn’t quite do in his last film, Kagemusha, in 1980. He has made all the preparation pay off. One army advances, and another, which has taken cover in a woodland, fires at the exposed men; the orange-red flashes that come from among the trees are extravagantly beautiful, and the use of timpani in the score helps to create a neo-barbaric mood. And Kurosawa has marshalled the heavens to his purposes: the changes in the light, the war clouds, the wind, the sun are all part of his absorption in logistics. Hidetora has no psychology; but we enter into his temperament in a different way. When he wanders over a windswept volcanic crater and the clouds churn, the convulsive natural world is his interior landscape—his own brutal psyche is taking revenge on him. This epic is static, but it deepens, and it has its own ornery splendor. Kurosawa’s pride in his command of the medium is indistinguishable from his command of the elements.