Rain Man is Dustin Hoffman humping one note on a piano for two hours and eleven minutes. It’s his dream role. As the autistic savant Raymond Babbitt, he’s impenetrable: he doesn’t make eye contact or touch anyone or carry on a conversation; he doesn’t care what anybody thinks of him. 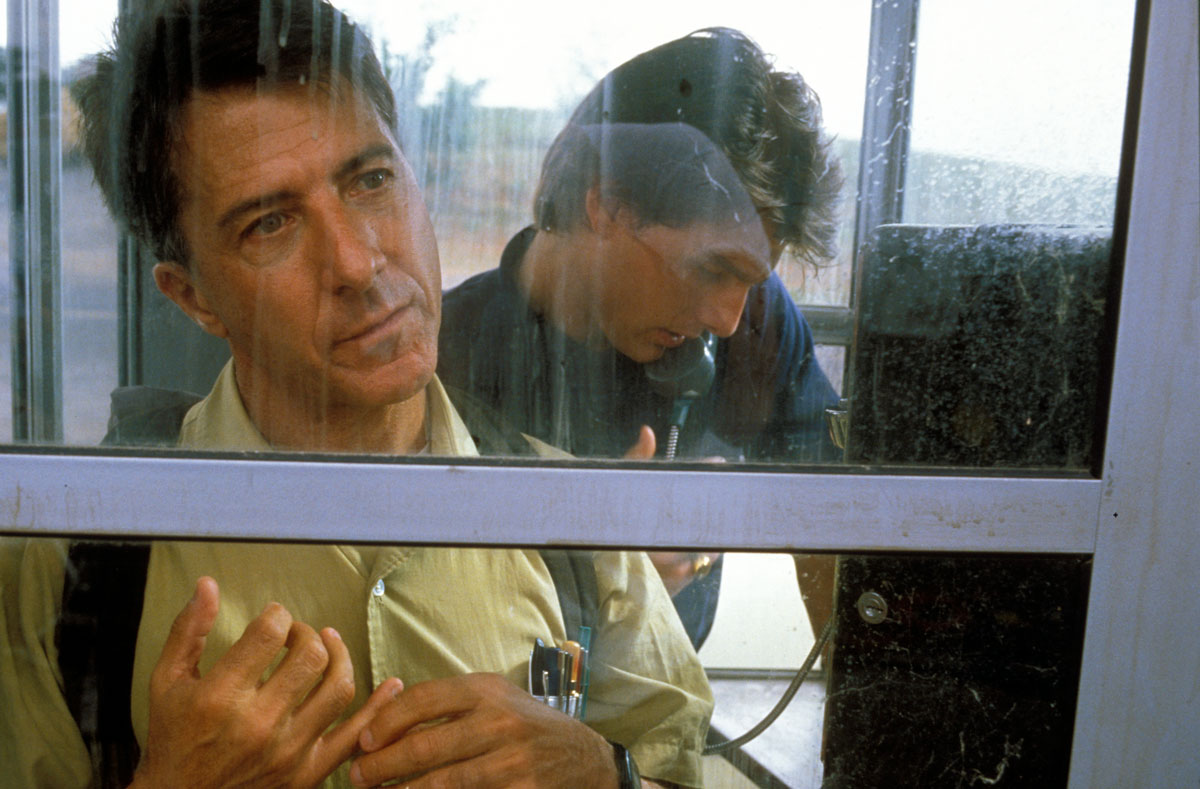 The following review is from “Rain Man: Stunt,” by Pauline Kael, originally published in The New Yorker, February 6, 1989.

Rain Man is Dustin Hoffman humping one note on a piano for two hours and eleven minutes. It’s his dream role. As the autistic savant Raymond Babbitt, he’s impenetrable: he doesn’t make eye contact or touch anyone or carry on a conversation; he doesn’t care what anybody thinks of him. Autistic means self-involved, and Raymond is withdrawn in his world of obsessive rituals. So Hoffman doesn’t have to play off anybody; he gets to act all by himself. He can work on his trudging, mechanical walk and the tilt of his head and the irascible, nagging sameness of his inflections. Autistics aren’t known to be jerky like this (they’re more likely to move slowly and fluidly), but Hoffman’s performance has an intricate consistency. Even his tight voice fits his conception.

In dramatic terms, what distinguishes autism from other behavioral syndromes is that you don’t get a direct emotional response from an autistic person. Even after Raymond is kidnapped by his younger brother, the slimeball Charlie (Tom Cruise), who hopes to get hold of some of the three million dollars their father has left in trust for Raymond’s care, Raymond shows no awareness of what’s happening to him. Yet because of the way the director, Barry Levinson, sets up the situations there’s nothing for you to do except watch Hoffman intently, microscopically, searching for clues to Raymond’s feelings. And you may begin to think that you’re reading him, that Levinson is bootlegging you teeny glimmers. What you definitely get is the zigzags of Raymond’s head that suggest panic at the violation of his daily routines. And now and then he lets out a primal bleat or squawk that alerts you to his terror of a new situation.

The heads of autistics seem to be wired in a closed-off way, as if their brains were divided into little boxes—little worlds unto themselves. And this is especially puzzling in the small percentage who, like Raymond, have surreal talents; he’s a wizard—a sci-fi computer mutant—at some mathematical-memory functions. Hoffman gets to play it all: a disconnected, pesky child with inexplicable powers. For close to an hour, it’s an entertaining comic turn. Intuitively, Hoffman seems to understand that we’d enjoy identifying with Raymond’s obstinacy—it’s his way to win out over his crummy brother—and when the audience laughs at Raymond the laughs are always friendly. He’s accepted as a harmless, endearing alien—E.T. in autistic drag. But then the performance has nowhere to go. It becomes a repetitive, boring feat, though the boringness can be construed as fidelity to the role (and masochists can regard it as great acting). Slightly stupefied as I left the theatre, I wondered for a second or two why the movie people didn’t just have an autistic person play the part. (In the seventies, when Robert Wilson staged his A Letter for Queen Victoria, he used an actual autistic teenager in the show, with babbling, trance-inducing music that seemed to evoke the fixations of an autistic child.) But with an actual autistic there would be no movie: this whole picture is Hoffman’s stunt. It’s an acting exercise—working out minuscule variations on his one note. It’s no more than an exercise, because Hoffman doesn’t challenge us: we’re given no reason to change our attitude toward Raymond; we have the same view of him from the beginning of the movie to the end.

Hoffman’s crabbed intensity worked marvellously when he played the paranoiac paroled robber in Straight Time, and it worked as nippy self-satire when he played the perfectionist actor in Tootsie. But it doesn’t feel right here. This is the fanatic, uncompromising actor in Tootsie playing an autistic the way he played a tomato. (In his mind’s eye he’s always watching the audience watch him.) It’s a determinedly external, locked-in performance (and Levinson makes no attempt, like Wilson’s, to take us inside the character by Expressionist means). We’re on the outside staring at this virtuoso apparatus. Hoffman doesn’t allow Raymond a minute of simple relaxed sluggishness; he keeps you conscious of the buzzing of anxiety in Raymond’s brain. He keeps his actor’s engine chugging and upstages the movie.

The kidnap plot is no more than a barefaced contrivance to get the two brothers on the road together. Rain Man has to get outdoors, or it’s just a TV sickness-of-the-week movie; it cinematizes a TV theme by moving the brothers from place to place. Their father has left Charlie a 1949 Buick Roadmaster convertible, and they travel in it, with many a stop, from Cincinnati to L.A. In the first days, the materialistic Charlie is tantrummy and almost insanely callous; he shouts crude insults at Raymond. Obviously these scenes are intended to show how self-centered Charlie is, and how far he has to go to become a sensitive, loving person; he’s meant to be spiritually autistic. But, oddly, Charlie’s jeering at Raymond doesn’t cause you pain. Levinson’s directing is too flaccid for you to feel the scenes sharply; there’s no conviction in them. (This makes the movie easy to swallow, on a TV level.) And Cruise as a slimeball is just a sugarpuss in Italian tailoring. He doesn’t even use his body in an expressive way. His performance here consists of not smiling too much—so as not to distract his fans from watching Hoffman. (This could be called “restraint.”) Cruise is an actor in the same sense that Robert Taylor was an actor. He’s patented: his knowing that a camera is on him produces nothing but fraudulence.

Charlie has felt sorry for himself for years. That’s been his justification for his cheap huckstering; he runs a shady business in L.A., selling imported sports cars that don’t quite meet American regulations. But during the trip—Charlie’s voyage of self-discovery—he has no one to hustle, and (according to plot calculation) is forced back on himself. Levinson lays it out for the audience on a platter: Charlie has the capacity to change. In due course, after he vents his exasperation at Raymond’s inflexibility, he begins to understand himself better and he learns to care about Raymond. And when the two brothers touch heads it’s clear that the time they’ve spent together has affected them both. They’ve regained the bond they had when Charlie was a baby and Raymond sang to him. This heads-together image has its poetry. It also sums up the film’s anti-sentimental sentimental bilge.

Rain Man is getting credit for treating autism “authentically,” because Raymond isn’t cured; in a simple transposition, it’s Charlie who’s cured. Actually, autism here is a dramatic gimmick that gives an offbeat tone to a conventional buddy movie. (Rain Man has parallels to several scenes in Midnight Run and Twins, but the standard buddy-movie tricks are so subdued that they may squeak by as “life.”) The press has been full of accounts of the research into autism done by Hoffman and Levinson and the principal scriptwriter, Ronald Bass, but what’s the use of all this research if then they rig the story and throw in a big sequence with Raymond using his whiz-bang memory to make a killing in Las Vegas that takes care of Charlie’s money troubles? And what’s the point of setting up Raymond’s avoidance of being touched if Charlie is going to hold him while showing him how to dance and Charlie’s warm-hearted Italian girlfriend (Valeria Golino) is going to teach him how to kiss? (Is that something Raymond is likely to be called on to do?) Everything in this movie is fudged ever so humanistically, in a perfunctory, low-pressure way. And the picture has its effectiveness: people are crying at it. Of course they’re crying at it—it’s a piece of wet kitsch.
Levinson—it’s his temperament—stretches out the scenes until they yawn. You may sit there thinking “And more?” “And again?” and “We’ve already been here!” This is the kind of moviemaking in which you’ve been there before you get there.

In the context of a hit like Rain Man—it’s the top box-office film in the country—it may seem almost naive to suggest that if Raymond is the central character, and the given of the material is that he can’t express his mental state, then it’s up to the moviemakers to do it. Movies have often been at their most eloquent when the writers and directors and designers and composers used the possibilities of visual and aural stylization, of imagination and fantasy, to envision how the world might be perceived by disordered psyches. (Examples: just about any film noir you can think of, the 1981 M-G-M musical Pennies from Heaven, Blue Velvet, Raising Arizona, Dreamchild, The Stepfather, De Palma’s Carrie, the BBC miniseries The Singing Detective.) If moviemakers don’t risk shaking up audiences and making our nerves tingle, they’re likely to fall back on hauling an autistic savant to Las Vegas, duding him up, and teaching him to kiss.