LITTLE BIG MAN: THE RED AND THE WHITE

Jack Crabb is 121 years old. His eyes are agate chips; senility seeps through the cracks in his voice. But Crabb is not your average superannuated former Indian fighter. He is Little Big Man, sole survivor of the Battle of Little Bighorn. 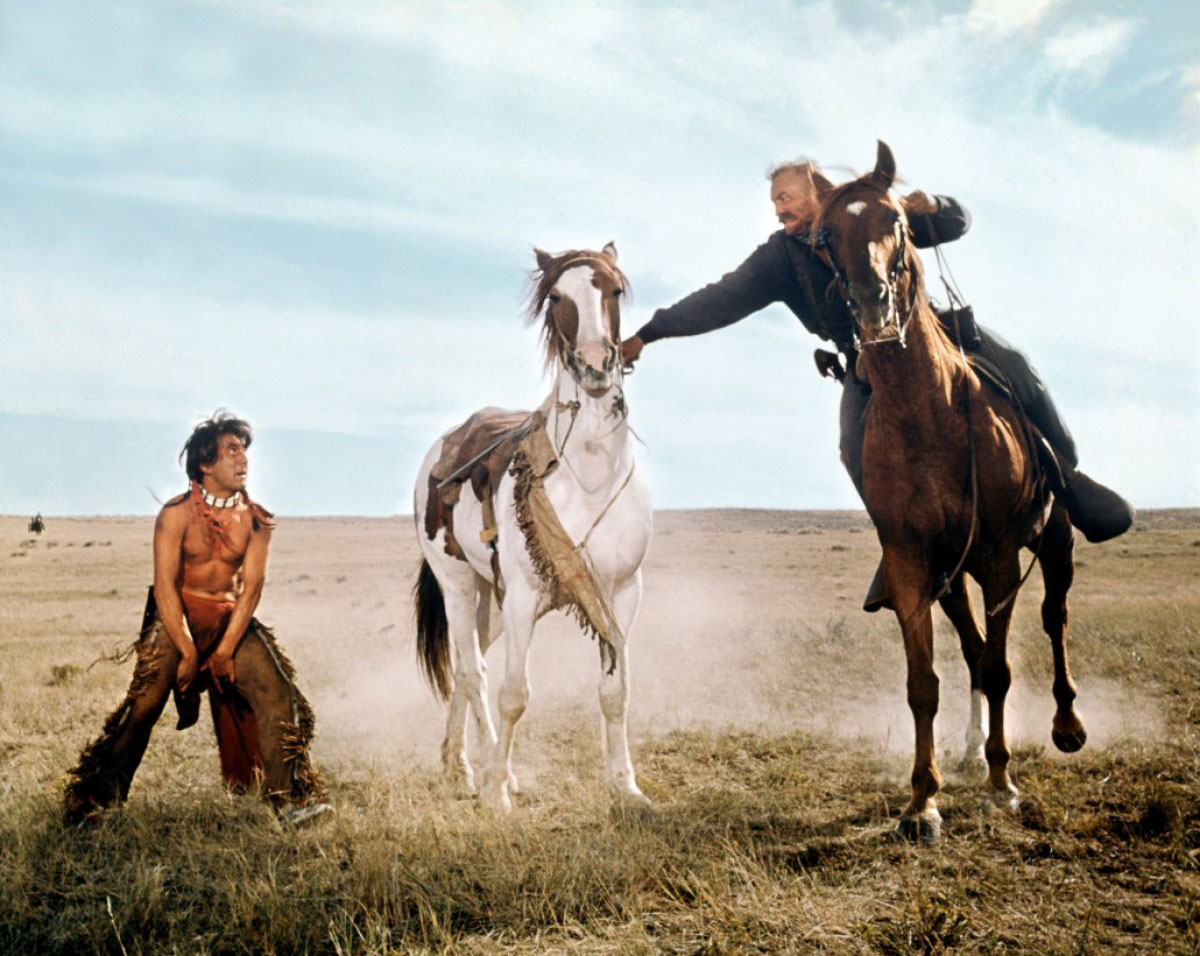 Jack Crabb is 121 years old. His eyes are agate chips; senility seeps through the cracks in his voice. But Crabb is not your average superannuated former Indian fighter, former Indian, intimate of Wild Bill Hickok and General George Armstrong Custer, ex-gunslinger, scalawag and drunkard. No sir. He is Little Big Man, sole survivor of the Battle of Little Bighorn. He may tell a stretcher or two, but when he reminisces, graduate students listen. A budding anthropologist starts a tape recorder, Crabb opens his toothless yawp and the saga unfurls.

And unfurls. And unfurls. For two and a half hours Little Big Man turns the tableaux on nearly every aspect of Western man. Thomas Berger’s panoramic novel owed its salinity to an immediate relative, Huckleberry Finn, from which it ransacked idiom and hyperbole by the chapterful. Like Huck, young Jack had no social insight; he accepted violence and duplicity the way he regarded sleet and fire—as aspects of earthly life. “The film happily preserves the chronicle’s innocence, if not its exact text.

Crabb knows Americana as he knows an old penny; from the Indian side and the In God We Trust side. He first appears as a boy whose family has been massacred by redskins. The Cheyennes who carry him off seem a mere mob to begin with, but they soon separate into individuals who refer to one another (in English translation) as “Human Beings.” The boy becomes an adopted brave, Little Big Man.

In the title role, shuttling incessantly from the red to the white side, Dustin Hoffman adopts precisely the right attitude of bewildered reality lost in myth, a photograph projected on a Frederic Remington painting. Unhappily, not all the cast is as comfortable in their roles. Some of the whites, such as Faye Dunaway as a preacher’s oestrous wife, and Martin Balsam as a bunco artist, play like fugitives from a road company of The Drunkard, with galvanic gestures and frozen speech patterns. The Human Beings, by contrast, are a people of dignity and variety. Among them are the homosexual Little Horse; the contrary Younger Bear, who says “hello” for “goodbye” and bathes in dirt instead of water; and the true lodestar of the film, Old Lodge Skins (played by Chief Dan George).

Director Arthur Penn has been alternately shrewd and loco with Little Big Man, but mainly he has been plumb lucky. In the book, Crabb complains about western movies that show Indians played by Caucasians “with 5 o’clock shadows and lumpy arms.” Perversely, Penn sought Sir Laurence Olivier and Paul Scofield for the chieftain’s role. When they refused, he awarded the part to Richard Boone, who resigned shortly before filming. It was only then that Penn chose a hereditary leader of Canada’s Salish tribe, Chief George, to play the old man. It was a momentous decision. Dan George’s stoicism and grace give him an almost Biblical presence. Sometimes, standing to one side, the chief seems to be the essence of the Cheyenne, waiting for some unnamed event—perhaps the time when the white man uses up all the firewood and moves on forever. He is no less memorable uttering an occasional phrase. When Little Big Man announces that he has a wife, Old Lodge Skins inquires: “Does she show a pleasant enthusiasm when you mount her?” The question seems not lascivious, but full of paternal concern. When he prepares to die, the ancient Human Being chants a prayer and stretches supine before his Maker. Result: nothing. His answer, “Sometimes the magic works, sometimes it doesn’t,” gives new credence to the speculation that the Indians are one of the lost tribes of Israel.

Would that the film makers had Chief George’s ingenuousness or Hoffman’s technique. For Calder Willingham (End as a Man) has provided a scenario that begins with robust rawhide humor, turns to profundity—and then collapses into petulant editorial. In the era of occupied Alcatraz, surely it is no news that the white man spoke with forked tongue, that the first Americans were maltreated as the last savages. The Battle of Little Bighorn, which should be the film’s climax, is its weakest point. General Custer is pure Pig on the Prairie, babbling insanely as the consummate racist militant. As overplayed by Richard Mulligan, he could be sectioned, labeled Swift’s Premium and sold in butcher shops.

Given such grossness, why should Little Big Man be counted as a rambunctious triumph? Because in its 360° scope of slaughter and laughter, the film has contrived to lampoon, revere or revile the length and breadth of the entire frontier. On the trek, it demonstrates inconsistencies and errata. For months audiences will be talking about them. It also accomplishes that rarest achievement, the breathing of life into an ossified art form. The seventies has its first great epic. Blood brother to the 1903 one-reeler The Great Train Robbery, Little Big Man is the new western to begin all westerns.