The young writer-director-photographer-editor of this un­promisingly titled film has a good deal of talent. He made Killer's Kiss a year or so ago in New York—on location and in a small studio—and later sold it to United Artists for distribution. He has now directed his first Hollywood film, a melodrama called (also unpromisingly) Bed of Fear. 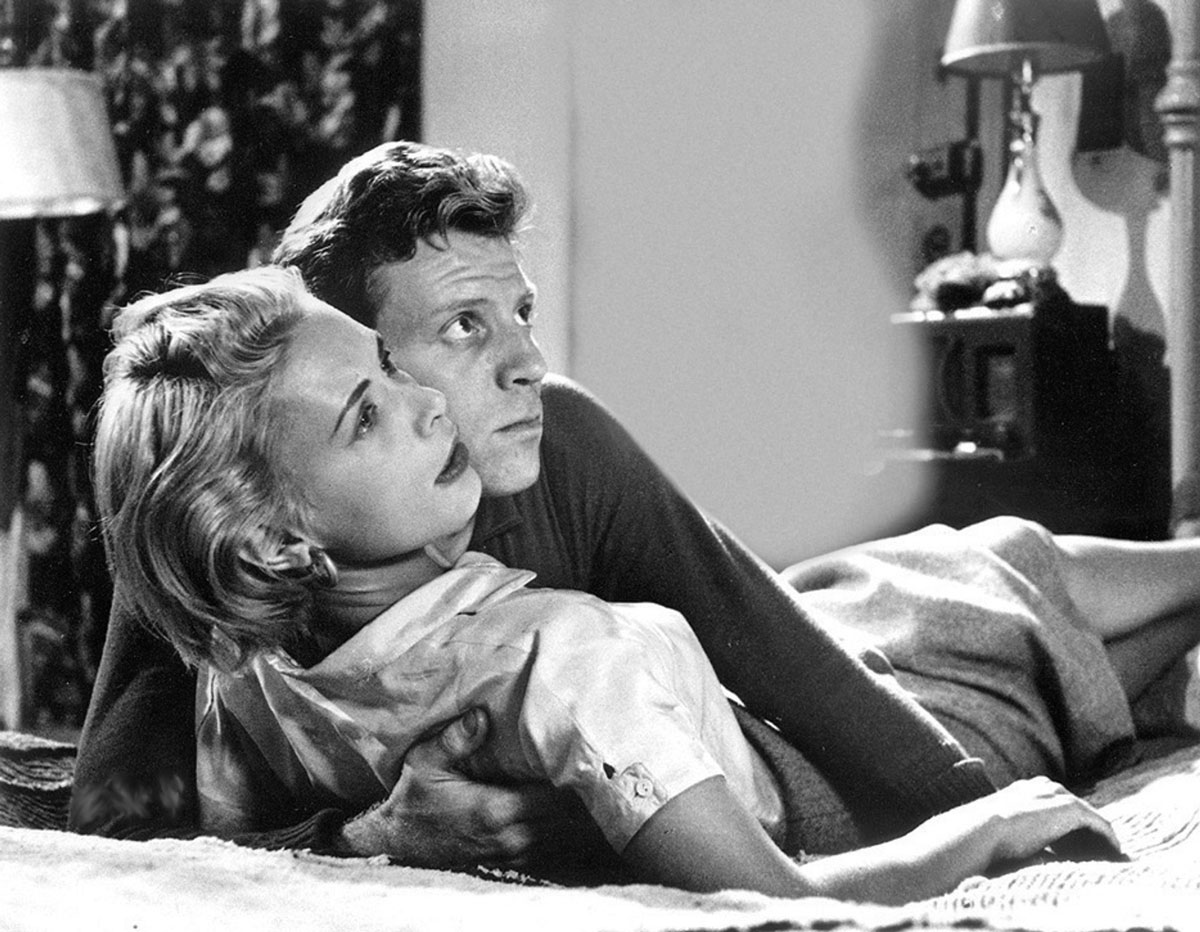 Killer’s Kiss is Stanley Kubrick’s second film, the first being Fear and Desire, also independently made, a violent, unpersuasive though evidently sincere anti-war story somewhat influenced by A Walk in the Sun. The difference between first and second film is striking; although Killer’s Kiss is a melodrama too full of familiar and not always skilful contrivances, it has a simplicity of outline, an atmospheric power, a directness in its characterisation, that suggests a maturing and distinctive personality. The story really only concerns three people: Davy, a young boxer who falls in love with Gloria, a dance-hall hostess, and her lover and employer, an unappetising petty crook who becomes savagely jealous when she leaves him, unsuccessfully attempts to set his thugs on Davy, then kidnaps Gloria, and is finally brought to justice after a rooftop chase. Kubrick chose the thriller form, one guesses, partly for commercial reasons, as an acceptable popular form within which to experiment, and partly because its reliance on action minimises the need for dialogue (the film is post-synchronised, on the whole very well). In fact, the melodrama is the least successful, most derivative aspect of the film; its real originality lies in its approach to characterisation and atmosphere.

The young couple created by Jamie Smith and Irene Kane have a modest, attractive naturalness; and Frank Silvera makes a disturbing figure of the rejected lover, vain, gross, ingratiatingly possessive, with a taste (it is hinted) for recherche sexual practices. These three characters arc placed against a New York background which comes alive with a subtle, unexpected force. The camera style is refreshingly free, and in the dance hall sequence it is not only the sardonically glimpsed hostesses and their partners but a series of vivid, casually related images—signs, advertisements, objects—-that create the milieu. Again, there is a scene in which Davy first makes love to Gloria, and the simple little room, the early morning view of the city through the windows, become part of the situation; there is something genuinely “lived” about it. Best of all is the sequence in which Davy, sitting dejected in his darkened room after losing a fight, watches Gloria come in across the courtyard, secs her prepare lazily, tiredly for bed. Little happens, but the most ordinary actions become suggestive and interesting; the episode crystallises what seems to be the director’s most remarkable talent—a kind of neo-realist approach to human behaviour, a feeling for the place and the moment, the apparently trivial or commonplace which yields up dramatic meaning. Kubrick has not only the observer’s eye to see this, but the photographer’s skill to record it. Lighting and composition, with their bold yet un-glossy texture, contribute to the personal impact.

By contrast the action sequences seem not only derivative but dramatically less strong. The attack on Davy’s manager in the deserted yard at night reminds one too directly of The Set-Up, and the rooftop chase, apart from recalling The Naked City, fails to excite. One would be tempted to say that all this represents something more theoretical, obligatory, for the director, were there not some explosions of physical violence that seem personally characteristic, and also a restlessness, an occasional jaggedness, that contribute to the film’s inner tension. At its most obvious and questionable this results in female models being weirdly truncated during the fight in the warehouse; the diversion with the two drunken conventioneers in the street, though, is a curious and effective touch. But when Gloria relates the story of her early life (which includes a starkly Freudian relationship with her father), and of her sister who became a dancer, Kubrick illustrates this simply by a series of shots of the dancer (Ruth Sobotka) performing on an empty stage, and the evocative lighting, the dancing and the choreography (by David Vaughan) are in themselves too interesting for one to be able to absorb what is being narrated on the soundtrack—apart from the irrelevance of the images for most of the time. All the same, this is the reverse side of the freedom, the experimentation, that runs through much of the film and affirms that its maker has a talent to watch.