In Washington last week the House Un-American Affairs Committee assembled a multi-million-dollar cast for the premiere of its amazing discovery—already well known to everybody acquainted with the movie industry—that there are some Communists and fellow travelers among Hollywood’s high-priced actors, writers and executives. 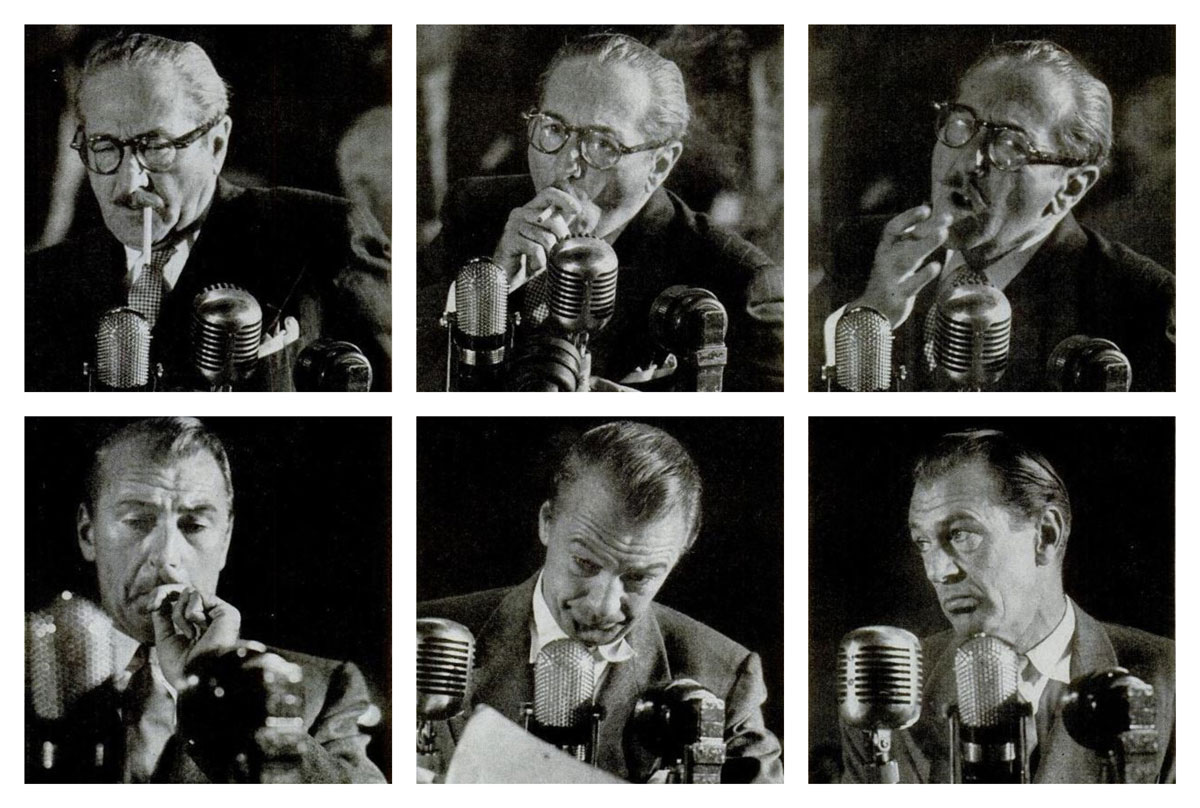 In Washington last week the House Un-American Affairs Committee assembled a multi-million-dollar cast for the premiere of its amazing discovery—already well known to everybody acquainted with the movie industry—that there are some Communists and fellow travelers among Hollywood’s high-priced actors, writers and executives. As can be seen from the photographs above, the investigation quickly produced some of the best acting ever seen in front of a congressional microphone. Unfortunately it failed, at least in its initial stages, to prove that anybody in Hollywood had managed to slip subversive propaganda over on the public except in such frankly pro-Russian wartime films as Mission to Moscow. Even worse, as far as the clarity of U.S. thinking goes, it demonstrated that often men who are paid for their profiles or their boy-meets-girl plots are equally at sea in matters of political science whether they list Left or Right.

ADOLPHE MENJOU, who delivered his testimony behind a cloud of cigaret smoke and a rich glow of sartorial splendor, accused Director John Cromwell of saying, “Capitalism is through.” Said Menjou, “That is a strange statement from a man who earns  more than $250,000 a year and who owns a large amount of real estate in Hollywood.”

GARY COOPER, in a cowboy drawl, said he had refused some assignments because he thought the scripts were “tinged with Communism.” But he added, “I never read Karl Marx and therefore don’t know so much about Communism except what I picked up from hearsay. But from what I heard I don’t like it because it’s not on the level.”

JACK WARNER, producer of Mission to Moscow and president of the League for the Preservation of American Ideals, said, “I wouldn’t know a Communist if I saw one.” But when speaking of Columbia University’s famed philosopher, John Dewey, he considered himself sufficiently informed to declare, “From what I read, he was a Trotskyite.”

ROBERT TAYLOR, who testified amid raucous applause and shouts of “Hooray!” from the gallery, said he believed that Communists should be “deported to Russia or some other unpleasant place.” When asked whether he knew any Communists, Taylor mentioned three writers and then immediately added, “Of course, I wouldn’t know, personally.”

CRITIC John C. Moffitt of Esquire magazine said that Communists attempt to belittle Congress and smear the priesthood.
WRITER Rupert Hughes declared, “Communists are worse than Benedict Arnold and should be treated accordingly.”
INVESTIGATOR J. Parnell Thomas kept one eye on witnesses, another on his press clippings.