EMPIRE OF THE SUN – REVIEW BY PAULINE KAEL

Empire of the Sun begins majestically and stays strong for perhaps forty-five minutes. It’s so gorgeously big you want to laugh in pleasure. Steven Spielberg takes over Shanghai and makes it his city. And then, first in brief patches and then in longer ones, his directing goes terribly wrong. 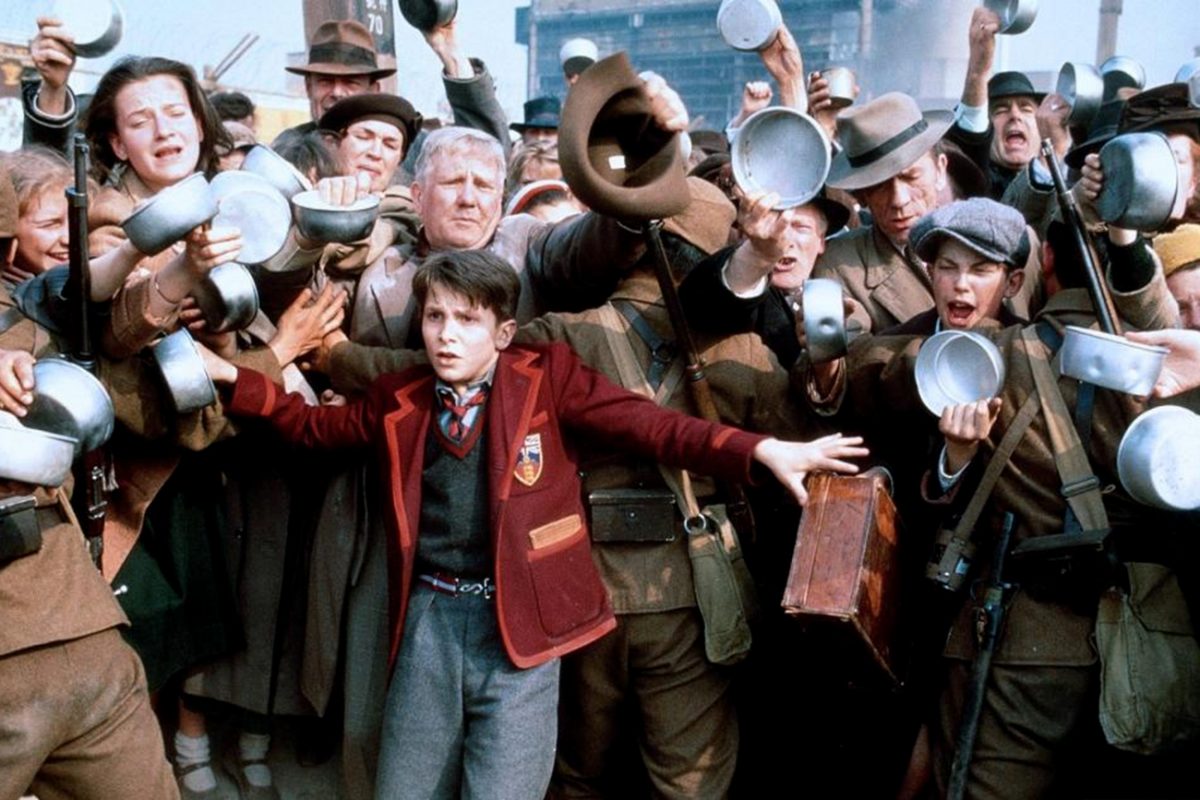 Empire of the Sun begins majestically and stays strong for perhaps forty-five minutes. It’s so gorgeously big you want to laugh in pleasure. Steven Spielberg takes over Shanghai and makes it his city. It’s swarming with people, all doing his bidding as the camera moves around the tops of stately buildings to the streets below. And then, first in brief patches and then in longer ones, his directing goes terribly wrong. Working on an enormous scale and with a large theme, he throws himself into bravura passages, lingers over them trying to give them a poetic obsessiveness, and loses his grasp of the narrative. For the sake of emotion— to have something to say, to give the picture some meaning—he pumps it full of false emotion. That’s what his poetry is.

At the outbreak of the Second World War, Jim (Christian Bale), an eleven-year-old British boy in Shanghai—a kid who goes to school in a chauffeur-driven Packard—is separated from his parents during the mass exodus when the Japanese Army invades the city, on December 8, 1941. He survives hunger and disease, a detention center, and three years in a prison camp. Evacuated from the camp and forced to march, he’s out in the countryside dying of starvation when there’s an American airdrop and he gets some cans of Spam and other things to eat. A few days later, he’s in a barracks and there’s another airdrop—a cannister on a parachute comes crashing through the ramshackle ceiling, and breaks open. It hovers in the air, like a pinata, and the foodstuffs come raining down, along with a shower of glitter. If Spielberg had only stuck with the Spam and forgotten about the pixie dust!

Jim flies model gliders at the beginning, when he still lives in a huge Tudor mansion in the British section of the city, and he reacts with reverence to the Japanese Zeros, the American P-51 Mustang fighters, and all the other warplanes he sees. With that as an excuse, Spielberg glamorizes each flight. A toy glider swerves in the sky for a magical eternity, and an exploding Zero gives off an aureole of sparks. The camp where Jim is imprisoned is adjacent to an airbase, and when he gets close enough to a Japanese plane to caress it choral music soars and he’s photographed like a boy who has just found God. This is more than a breach of taste: it’s a breach of sanity, and it rattles your confidence in the movie. Presumably, we’re seeing all this through the boy’s wonder-struck eyes, but it’s Spielberg who’s saying “Ooh, look!” and showing us a cloying mystical effect. (He tries to give you a miracle every ten minutes.) The scenes about Jim’s friendship with a Japanese boy—a smiley teen-age pilot from the airbase—are so full of good will they feel thick, pudgy. And each time we get a demonstration of the gallantry of the flying brotherhood the movie seems to be regressing.

Near the opening, there’s a startling effect that feels almost like a throwaway gag: Jim, who’s high up in a hotel overlooking the harbor, sees a ship flashing signals and, being a smart kid who knows Morse code, he signals back, and instantly—bam!—the hotel is shelled, as if he’d caused it, or even willed it. The scene isn’t stressed, but it has a resonance: it speaks to our understanding of the gap between children’s play and grownup behavior—the gap that is closed in wartime. Jim is forced to grow up in brutal circumstances. Spielberg tries to use movie magic to transmute these brutal circumstances to beauty—to a myth—and he thinks he can achieve this by putting a veil over events.

He’s using an adaptation of J. G. Ballard’s autobiographical novel which is credited to Tom Stoppard (it was also worked on by Menno Meyjes), but he doesn’t clarify what’s going on. A scene in which Basie (John Malkovich), a scavenging American merchant seaman, and his crony Frank (Joe Pantoliano) try to sell Jim to Chinese traders is skipped over fast. And in the prison camp, though you feel something seamy and sadistic in the way Basie—a control freak, a Fagin—teaches Jim the low skills of survival, you can’t get a fix on the nastiness. So it’s just amorphously nasty. You feel that Mrs. Victor (Miranda Richardson), the aloof, snobbish Englishwoman near whose bunk Jim sleeps, must have something more to her than you’re being shown. (In the novel, she treats Jim “like her Number Two Coolie.”) Spielberg seems to be making everything nice, and, as with The Color Purple, there’s something in the source material that’s definitely not nice. In its matter-of-fact, boy’s-adventure way, the Ballard book tries to get back to the innocent child and how he was warped; Ballard’s account recalls the disturbing qualities of The Painted Bird. Spielberg’s blandness works against the theme. How can he make an epic about the soul-freezing scuzziness of war as experienced by a child if he sweetens things? This is The Color Yellow. He treats the hell of the prison camp as if it were the background for a coming-of-age story—as if the rich kid Jim’s being on his own and learning to wangle gifts and to steal from the dead made a man of him. You come out saying, “What was that about?”

The boy is a fine performer, directed superlatively—especially in the scene where Jim is chasing after the truck that is leaving the detention center and taking a group of prisoners, including Basie, to a camp. Frantic, babbling like mad, Jim tries to get Basie’s attention, but Basie deliberately ignores him and turns on his charm for two littler kids in the truck. It’s probably the best dramatic scene in the movie, because it expresses so much of Jim’s terror at the thought of losing the only protector he has, and so much of Jim’s wartime amorality. (He gets on the truck by claiming he can guide the Japanese driver, who doesn’t know the way.) Jim is very appealing when he’s hysterically eager to run errands for everybody in the camp in order to survive; we understand his wanting to stay in motion. And we understand Spielberg’s madness when he stages the crowds surging through the streets of Shanghai, trying to leave the city by getting to the waterfront or getting to the roads, and caught in human gridlock with tanks bearing down on them. The spectacle is bigger than any damn movie staging you’ve ever seen—five thousand people, ten thousand, fifteen thousand. Even if it overpowers the story, there’s something shamelessly likable about this profligacy: it’s a moviemaker’s dream. And the imagery makes its own point about the crosscurrents of war.

But often Spielberg doesn’t appear to know what effect he’s after. When the once rich prisoners on their death march come to a stadium filled with confiscated chandeliers, limousines, grand pianos, paintings, and sculpture, the sheer quantity of the stuff evokes the huge accumulation of objects in boxes and crates in Citizen Kane, but what is the image meant to signify—that the rich in Shanghai were too rich and are finding redemption in suffering, or that the Japanese were wasteful to leave these precious objects in the open air, or something else altogether? Perhaps that the old life of privilege is like a dream? What we see is flabby, picturesque surrealism, and when a woman sits down at one of the pianos and we hear what sounds like abandoned-mansion music, people in the theatre whisper that the piano is in tune, and giggle. The audience is trying to fill the vacuum, because scene after scene doesn’t go anywhere. When Jim, after being separated from his parents, goes back to the near-deserted house, there’s talcum powder on the floor of his mother’s room and boot prints, along with a bare footmark and hand prints. Spielberg holds the camera so long on the messy floor that we feel stupid not to understand whether this is a dream-born image of rape and desecration or the sign of something that has actually happened. (To whom?) He luxuriates in images. He holds the camera on Jim, alone in the house doing forbidden things—eating chocolates with liqueur centers, bicycling around on the parquet floors—and then aimlessly circling the grounds. Later, he holds it for a picture-postcard view of Jim saluting the valor of three kamikaze pilots who are about to take off from the airbase. The movie is all “Ooh, look!” It’s mindlessly manipulative. To achieve the larger-than-life emotions that Spielberg is after he needs more than the one character—the boy. (The framework is exactly the same as that of the animated film Spielberg produced, An American Tail, in which a little boy mouse is separated from his parents, goes through horrifying adventures, and at last is reunited with mama mouse and papa mouse.)

In technical terms, Empire is a considerable achievement. Spielberg had permission to shoot in Shanghai for only three weeks, and the settings were matched up and constructed in Spain and in London. But the picture is a combination of craftsmanship and almost unbelievable tastelessness. Every time Spielberg tries to make a humanitarian statement, he falls flat on his face—not just because his statements are so naïve but because they go against the grain of Ballard’s material. (The movie actually gives Jim a dawning of moral awareness: he decides he no longer wants Basie for a friend.) Spielberg is stranded with his proud moments. That’s where John Williams comes in: his editorializing music swells and swooshes for hours of this movie, trying to make us feel that something religious is going on. It’s musical glue poured over candied images.