Dirty Harry is obviously just a genre movie, but this action genre has always had a fascist potential, and it has finally surfaced. Since crime is caused by deprivation, misery, psychopathology, and social injustice, Dirty Harry is a deeply immoral movie. 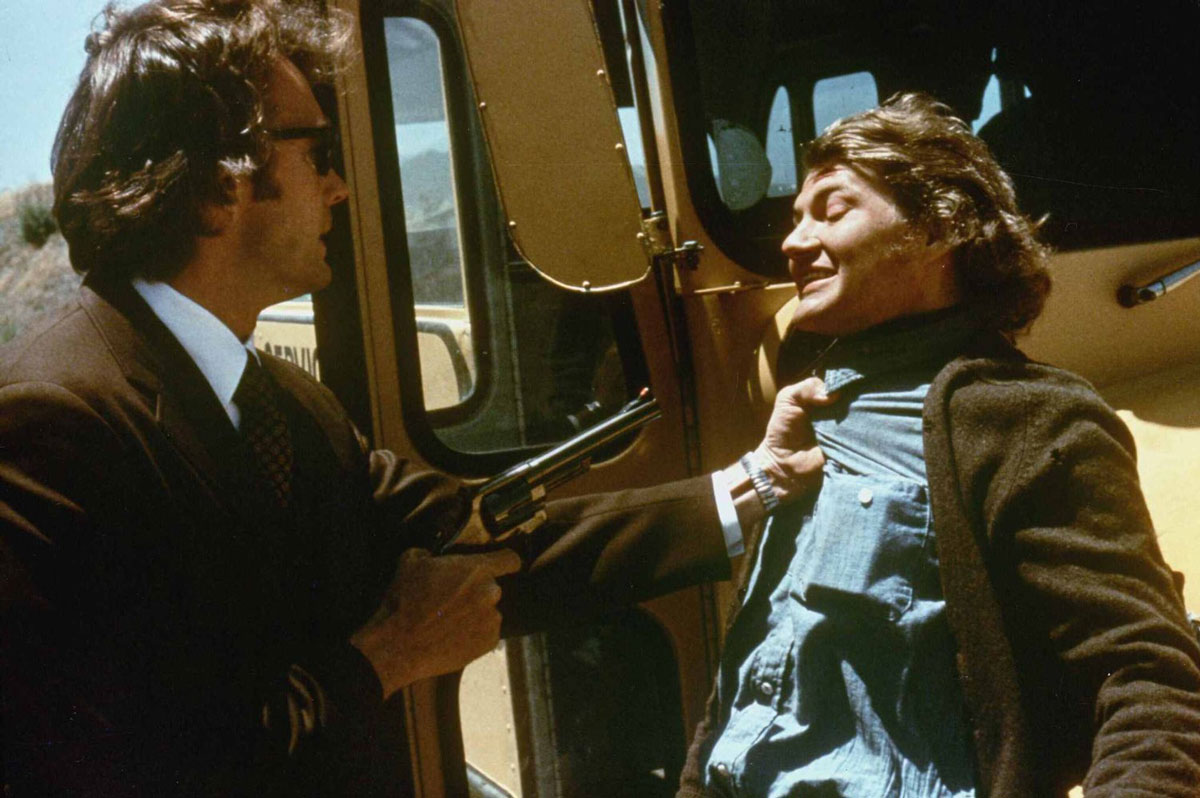 The movie opens on a memorial plaque in the lobby of the San Francisco Hall of Justice, and we read the words “In Tribute to the Police Officers of San Francisco Who Gave Their Lives in the Line of Duty,” and then the beginning of a list of names. This is a rather strange opening for Dirty Harry, since it isn’t about the death of a police officer. The tribute, however, puts the Viewer in a respectful frame of mind; we all know that many police are losing their lives. The movie then proceeds to offer a magically simple culprit for their deaths: the liberals. Actually, the opening is strange for other reasons, too. I grew up in San Francisco, and one of the soundest pieces of folk wisdom my mother gave me was “If you’re ever in trouble, don’t go to the cops.” I remember a high-school teacher telling me that it never ceased to amaze him that his worst students—the sadists and the bullies—landed not in jail but on the police force, though sometimes on the police force and then in jail. Even as children, San Franciscans were deeply aware of the corruption of the police—something totally ignored in this movie. Dirty Harry is not about the actual San Francisco police force; it’s about a right-wing fantasy of that police force as a group helplessly emasculated by unrealistic liberals. The conceit of this movie is that for one brief, glorious period the police have a realist in their midst—and drive him out.

Dirty Harry is not one of those ambivalent, you-can-read-it-either-way jobs, like The French Connection: Inspector Harry Callahan is not a Popeye —porkpie-hatted and lewd and boorish. He‘s soft-spoken Clint Eastwood—six feet four of lean, tough saint, blue-eyed and shaggy-haired, with a rugged, creased, careworn face that occasionally breaks into a mischief-filled Shirley MacLaine grin. He’s the best there is—a Camelot cop, courageous and incorruptible and the protector of women and children. Or at least he would be, if the law allowed him to be. But the law coddles criminals; it gives them legal rights that cripple the police. And so the only way that Dirty Harry—the dedicated troubleshooter who gets the dirtiest assignments—can protect the women and children of the city is to disobey orders.

As suspense craftsmanship, Dirty Harry is smooth and trim; based on an original screenplay by Harry Fink and his wife, R. M. Fink (formerly a TV writing team, now operating out of Switzerland), with some additional writing by Dean Riesner, it was directed in the sleekest style by the veteran urban-action director Don Siegel, and Lalo Schifrin’s pulsating, jazzy electronic trickery drives the picture forward. Lalo Schifrin doesn’t compose music—he works on you. It would be stupid to deny that Dirty Harry is a stunningly well-made genre piece, and it certainly turns an audience on. But turning on an audience is a function of motor excitation that is not identical with art (though there is an overlap); if it were, the greatest artists would be those who gave us heart attacks. Don Siegel is an accomplished exciter; once considered a liberal, he has now put his skills to work in a remarkably singleminded attack on liberal values, with each prejudicial detail in place. Dirty Harry is a kind of hardhat The Fountainhead; Callahan, a free individual, afraid of no one and bowing to no man, is pitted against a hippie maniac (loosely based on San Francisco’s Zodiac Killer) who is a compendium of criminal types. The variety of his perversions is impressive—one might say that no depravity is foreign to him. He is pure evil: sniper, rapist, kidnapper, torturer, defiler of all human values. Paradisiacal San Francisco supports this vision. In New York, where crime is so obviously a social outgrowth, the dregs belong to the city, and a criminal could not be viewed as a snake in paradise. But, as everyone knows, the San Francisco light and the beauty of the natural setting transform and unify the architectural chaos; even poverty looks picturesque, as in other tourist traps, and crime can be treated as a defiler from outside the society. This criminal is not one for whom we need feel any responsibility or sympathy, yet he stands for everything the audience fears and loathes. And Harry cannot destroy this walking rot, because of the legal protections, such as the court rulings on Miranda and Escobedo, that a weak liberal society gives its criminals. Those are the terms of the film. The dirtiness on Harry is the moral stain of recognition that evil must be dealt with; he is our martyr—stained on our behalf. The content fits the form, and beautifully—hand in glove. In the action genre, it’s easier—and more fun—to treat crime in this medieval way, as evil, without specific causes or background. What produces a killer might be a subject for an artist, but its a nuisance to an exciter, who doesn’t want to slow the action down. When you’re making a picture with Clint Eastwood, you naturally want things to be simple, and the basic contest between good and evil is as simple as you can get. It makes this genre piece more archetypal than most movies, more primitive and dreamlike; fascist medievalism has a fairy-tale appeal.

The movie was cheered and applauded by Puerto Ricans in the audience, and they jeered—as they were meant to—when the maniac whined and pleaded for his legal rights. Puerto Ricans could applaud Harry because in the movie laws protecting the rights of the accused are seen not as remedies for the mistreatment of the poor by the police and the courts but as protection for evil abstracted from all social conditions—metaphysical evil, classless criminality. The movie shrewdly makes the maniac smart, well-spoken, and white, and in order to clear Harry of any charge of prejudice or racism he is given a Mexican partner (Reni Santoni). The audience is led to identify totally with Harry and to feel victorious because the liberals don’t succeed in stopping him. He saves us this time; he slaughters the maniac who has grabbed a busload of terrified children and is slapping them around. But Harry Callahan has to defy the mayor and the police department to do it. And, in a final gesture of contempt for the unrealistic legal system, Harry throws his badge into the same waters that the killer’s corpse is floating in. Harry has dirtied himself for the last time; there is no one now to save us from evil, because the liberals are running the city.

The gesture at the end is a reprise of Gary Cooper’s gesture at the end of High Noon, but with a difference: in high-minded High Noon, phony in its own way, Cooper, the marshal, singlehandedly cleaned up the outlaw gang and then threw his badge on the ground in contempt for the cowardice of the townspeople, who didn’t live up to the principles of the law and wouldn’t help him defend it. Dirty Harry says that the laws were written by dupes who protect criminal rats and let women and children be tortured, and Eastwood throws his badge away because he doesn’t respect the law; he stands for vigilante justice.

If you go along with the movie—and it’s hard to resist, because the most skilful suspense techniques are used on very primitive emotional levels—you have but one desire: to see the maniac get it so it hurts. The movie lacks the zing and brute vitality of The French Connection, but it has such sustained drive toward this righteous conclusion that it is an almost perfect piece of propaganda for para-legal police power. The evil monster represents urban violence, and the audience gets to see him kicked and knifed and shot, and finally triumphantly drowned. Violence has rarely been presented with such righteous relish.

At one point, Harry catches the mass murderer, but the police—in an implausible scene that really pushes its political point—decide they can’t bring him to trial, because of legal technicalities, and so they blithely release him. Although they know he has already killed several people, they don’t even bother to put a tail on him. And whom do they consult before releasing him? A Berkeley law professor, of course. Such a perfect touch for the audience. Anyone who knows San Francisco knows that in the highly unlikely circumstance that a law professor were to be consulted, he would be from the University of San Francisco, a Catholic institution closer in location and nearer in heart to the S. F. Police Department—or, if not from there, from Hastings College of the Law, a branch of the University of California that is situated in San Francisco. But Berkeley has push-button appeal as the red center of bleeding-heart liberalism; it has replaced Harvard as the joke butt and unifying hatred of reactionaries. The movie is just as astute in what it leaves out: in his guise as sniper, the many-sided evil one has an impressive arsenal that includes a high-powered rifle and a machine gun. But the movie raises no question about how he was able to purchase these weapons. There is one virtuoso plot development: the maniac arranges to get himself beaten to a garish pulp, so that he can scream police brutality and pin the blame on Callahan. The San Francisco police, with their unenviable record of free-style use of the billy, should contribute to a memorial plaque for Dirty Harry.

On the way out, a pink-cheeked little girl was saying “That was a good picture” to her father. Of course; the dragon had been slain. Dirty Harry is obviously just a genre movie, but this action genre has always had a fascist potential, and it has finally surfaced. If crime were caused by super-evil dragons, there would be no Miranda, no Escobedo; we could all be licensed to kill, like Dirty Harry. But since crime is caused by deprivation, misery, psychopathology, and social injustice, Dirty Harry is a deeply immoral movie.

To excite an audience, you don’t really need to believe in anything but manipulative skills—and success. If you’re intelligent and work this way, you become a cynic; if you’re not very intelligent, you can point with pride to the millions of people buying tickets.