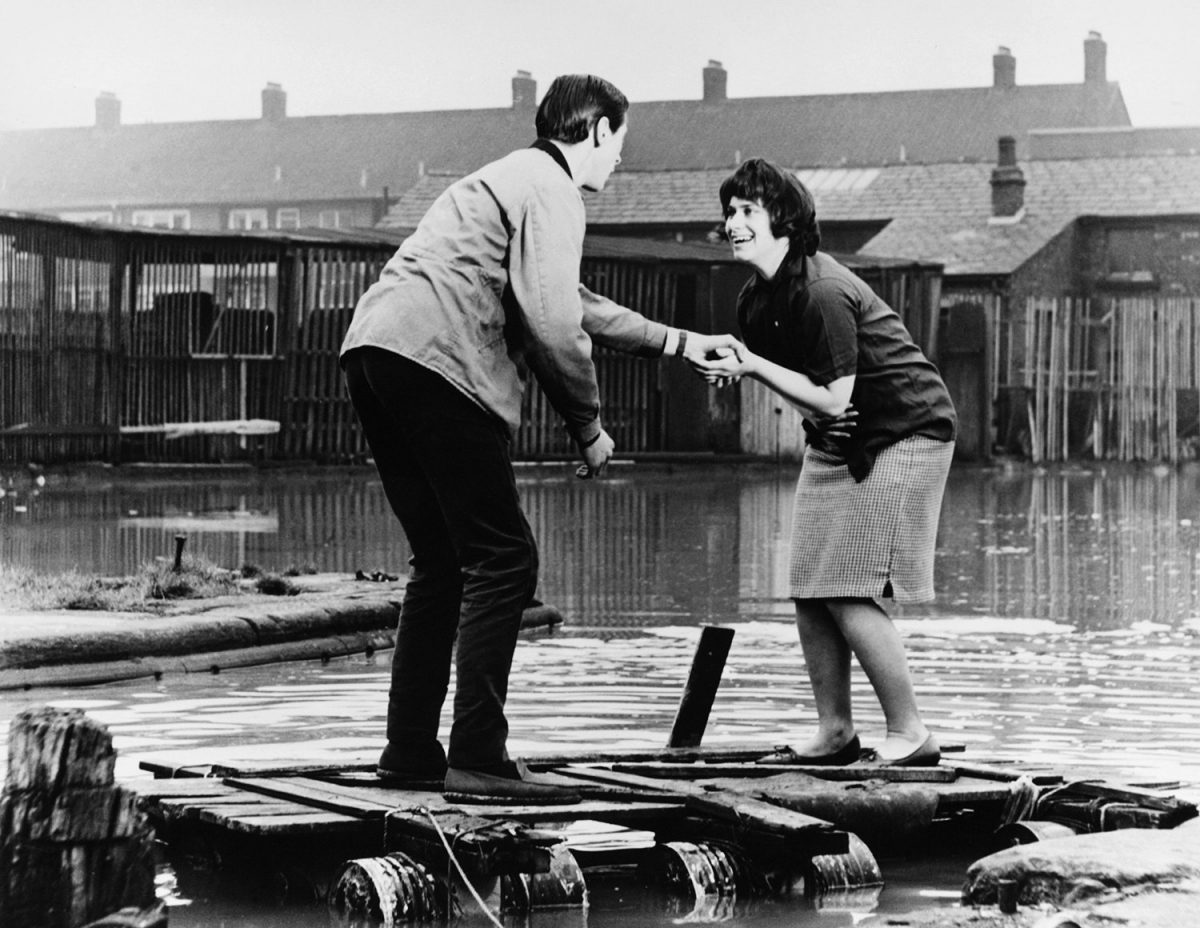 The audiences at popular American movies seem to want heroes they can look up to; the audiences at art houses seem to want heroes they can look down on. Does this mean that as we become more educated, we no longer believe in the possibilities of heroism? The “realistic,” “adult” movie often means the movie in which the hero is a little man like, presumably, the little men in the audience.

A year or so ago art-house audiences were carried away by Ballad of a Soldier and its “refreshing” look of purity and innocence. The new refresher may be A Taste of Honey. The inexperienced young hero of Ballad of a Soldier was too shy and idealistic to make any direct overtures to the heroine; the hero of A Taste of Honey goes beyond inexperience, he’s inadequate—and audiences love him all the more for it. I didn’t much like the material of Ballad of a Soldier, but it was well handled to achieve its effects; I do like Shelagh Delaney’s material, but the movie treatment is rather coarse. Tony Richardson is beginning to gain assurance of the wrong kind: in A Taste of Honey his direction is more controlled than in Look Back in Anger or The Entertainer, but it is at the expense of some of the best material in the modem theater. His treatment of A Taste of Honey is both more pretentious and less exciting than the slender material of the play. He has learned how to package the material and build in the responses like an American director. He doesn’t take a chance on our reaching out to the characters or feelings; everything is pushed at us. What should be a lyric sketch is all filled in and spelled out until it becomes almost a comic melodrama.

The play, written by an eighteen year old working-class Lancashire girl, has fresh dialogue and feeling and warmth. The story is simple: Jo (Rita Tushingham), a schoolgirl, temporarily abandoned by her fun-loving mother who goes off with a new husband, has an affair with a Negro seaman, and then meets a lonely fellow-spirit, a homosexual, Geoff (Murray Melvin), who moves in with her and looks after her during her pregnancy. I use the novelettish term “fellow-spirit” inten­tionally, because I think it helps to establish the idyllic frame of reference. The story is about a little mock paradise that is lost: the mother comes back and throws Geoff out, but Jo has had her taste of the honey of sweet companionship. A Taste of Honey is a fairy tale set in modem industrial ugliness. Geoff in this story is a combination Peter Pan and homemaking Wendy who had to have a pretend baby, and he’s a fairy godmother as well. The girl Jo is herself a Peter Pan figure: stubborn, independent, capering and whimsical, ignoring most of the world, moved only by what interests her. Tire background music—children’s songs—further aligns Jo and Geoff with the world and the charm of children. Their pleasures are innocent and carefree; by contrast, the grownups are almost all horrible objects, sexual in a nasty, grotesque way.

Perhaps the greatest charm of A Taste of Honey, and this is a distinctively modern charm, is in the poetry of role confusion. The mother and daughter don’t have a parent-child relationship; they are more like bickering siblings. And Jo and Geoff are not like woman and man but like non-bickering siblings, Geoff the older sister looking after Jo, the disorderly younger sister, in what is a bit of a parody of the maternal relationship Jo has not previously experienced. These role confusions arc presented by Shelagh Delaney with simple directness and without any moralizing.

What’s the matter with the film? Perhaps I can get at this indirectly. Have you ever, after an exhausting all-night party or conversation, taken a walk at dawn? It’s cleansing and beautiful and you decide that you’ll change your way of life, get up early, breathe the fresh air. Well, the movie is about the way the morning air feels for those who naturally get up in it, but it appears to be made by people who stayed up all night and then, tired and hung over, discovered the morning air and thought it was a great thing and more people should know about it.

It’s not as if it were done in Hollywood—you may have heard about the Hollywood producer who wanted to make the film with Audrey Hepburn as Jo and give it a typical American upbeat ending by having the child born dead. (With Audrey Hepburn could it be born alive?) You have to be familiar with Hollywood’s curious codes to understand that killing off the little bastard squares everything; and the heroine, having suffered, would then be redeemed. This film doesn’t attempt to lick the material at the Hollywood level, but the director simply can’t find the innocence or the imagination or the style that the boisterous, contagious material deserves and needs. The performers arc good, but the camera emphasizes their qualities until even their best work seems overdone. If only we could discover the lyric qualities in Rita Tushingham’s Jo—but Richardson doesn’t give us credit for enough vision (perhaps because his own eye isn’t very good); he keeps shoving close-ups at us until we’ve had too much of her homely gamin beauty. And the mother (Dora Bryan), in particular, is handled with low comic crudity. It’s enough to sec her singing and on a dance floor; do we also need the easy laugh of seeing her in a room alone bending over, with the camera glued to her corseted backside? Do we need to sec her aging flesh in the bathtub? Do we need to have her behaving like a crude villainess, turning the hapless, unwanted little Geoff out of the house?

As a director, Richardson does moralize. He’s always looking for points he can drive home, for larger social nuances—for the obvious that he finds so meaningful. (The working-class author couldn’t be expected to have the social-consciousness that an educated literal can supply.) He isn’t content with the material; he wants to make a statement. And what can make a statement so visually as the grimy working-class watelands of industrial England? Richardson uses actual locations, but he uses them like sets; the backgrounds arc cleverly selected, but merely cleverly selected. The documentary background* are additional visual material: they don’t so much help to tell Jo and Gooffs story as to reveal the director’s story.

A Taste of Honey doesn’t do anything for the art of the film, but it has, nevertheless, altered our environment. The sad-eyed queen is the new hero.

The crazy mixed-up kid is an “exhausted” theme—exhausted be­cause the movies couldn’t deal with the boring, prosperous, conformist society the kids were reacting against, and had to pretend the kids were simply unloved and misunderstood. Audiences longing for a hero to lavish their sympathies on have a new unfortunate they can clasp to their social-worker hearts: the ideal “little man,” the homemaker, the pure-in-heart, childlike, non-threatening male, the man a girl can feel safe with—and who could be more “deprived”? They can feel tender and tolerant, and they can feel contemptuous, and in-the-know at the same time: the man a girl can feel safe with is a joke, he’s not a man at all. The role-confusion of the story becomes the source of gratification for the audience: Geoff is poetic because he’s inadequate, and you’re not just having a dirty laugh, you’re accepting life. Romance and comedy are one: the hero is the butt. And the audience, having had him both ways, feels worldly and satisfied.