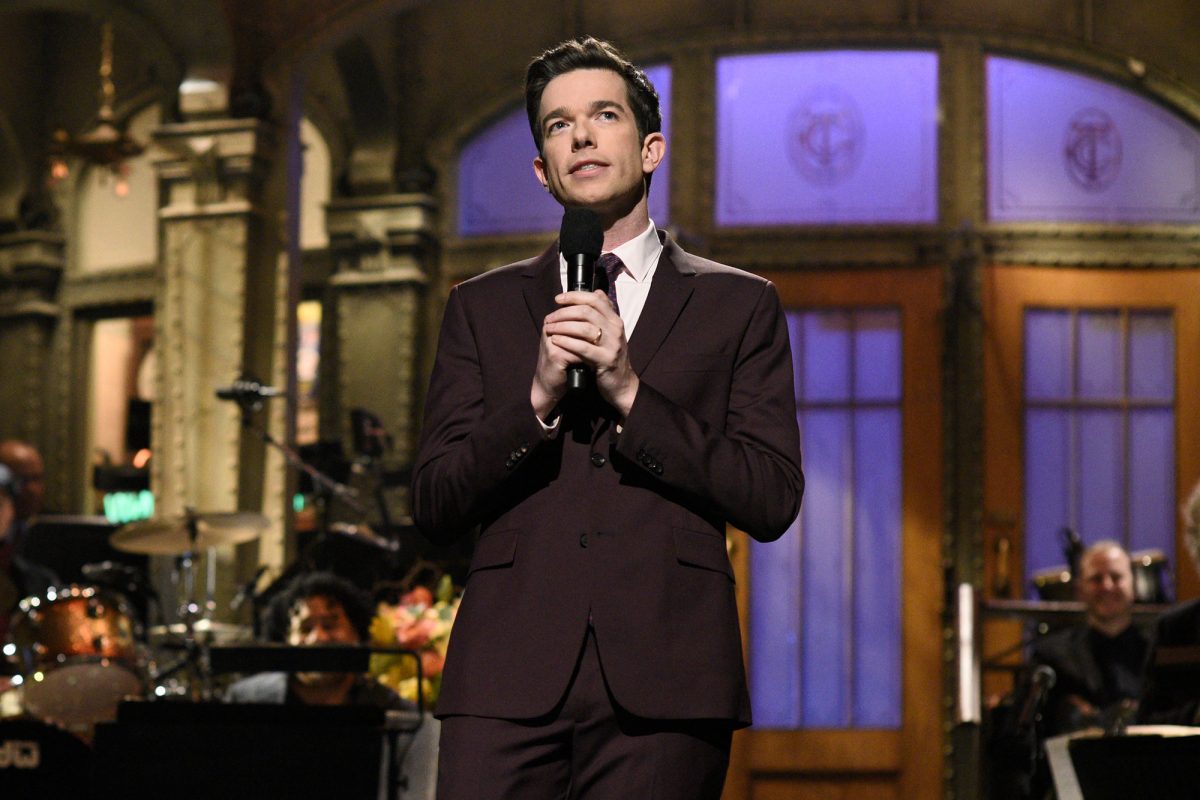 Thank you! Thank you! Thank you very much. It is great to be here hosting “Saturday Night Live” for the fourth time. [Cheers and applause] It’s the most anyone’s ever hosted. [Laughter] Happy Halloween to all of you and thank you for coming to this, thank you for everyone here who did so much work to make something happen, because nothing had been happening for so long. We all really appreciate it. My name is John Mulaney. I am a comedian, or as I like to call us, the last responders. [Laughter] I live in New York City, I love New York City, I love that you’re all wearing masks. I’m a little sad about masks in New York City because it prevents you from overhearing conversations on the street, and that is one of the greatest joys. Just before Covid hit, in December I was downtown, I was on west 12th street. I was walking downtown, I was on west 12th, and I’m walking this way, and this guy’s coming towards me this way. He’s on a cell phone. We’re both downtown. As he walks past me, I hear him go, “no, no, no, I can’t meet right now, I’m way uptown.” And then he looked at me, and he winked. That’s the best guy I’ve ever seen in my life.

[Cheers and applause] A lot of people binge watch tv during quarantine. I only watched one series during quarantine, an hour-long dramedy called, “The daily press conferences of governor Andrew Cuomo.”

What was there that it was brilliant was that he tried to relate to us with his own problems. Sometimes he’d be talking about like a situation it’s what we’re all going through and it was clearly something going down in the Cuomo household at the moment. “We’re all trying to figure this out. Say your brother wants to take the kids to see grandma. And he says, ‘well, what if I brought the kids just halfway into the house, and she stayed on the other side of the kitchen?’ I said, ‘it’s an airborne illness. You can’t have the kids even that close to grandma.’ She says, ‘well, it’s important for them to see their grandmother.’ I go, ‘you gavone bitch, if you bring your kids even into my mud room of my mother’s house, I will break your neck and bury you in the rockaways.”

I am worried that when the coronavirus is over, that Cuomo won’t realize that his show is over. [Laughter] I’m afraid he’ll take it on the road and try to play stadiums, “hey, who wants to hear about my daughter’s boyfriend?” Everyone’s like, “play Covid!”

And by the way, he’s our least-weird politician of America, like 45 of the weird ones. Oh, yes. I’m supposed to make an announcement. On November 3rd there is an elderly man contest. [Laughter] There’s two elderly men and you’re supposed to choose your favorite of the two elderly men. You can put it in the mail or you can go and write down which elderly man you like and then we’ll add ’em all up and then we might have the same elderly man or we might have a new elderly man.” Just rest assured, no matter what happens, nothing much will change in the United States. The rich will continue to prosper while the poor languish, families will be upended by mental illness and drug addiction. Jane Lynch will continue to book lots of projects. [Laughter] When she does, she’ll deliver, she’s so good at being on TV.

That will continue. But there will be problems. There will be sleepovers where five of the girls gang up on one of the girls. [Laughter] And they bully the girl. And the girl they’re bullying, the girl having the sleepover didn’t even want to invite but her mom made her and that’s the root of the tension. They bully her until she’s crying and then she wants to go home. And then the parents of the girl throwing the sleepover will have to call the unpopular girl’s parents and say “can you come pick her up?” Then that moment where the dad has to sit at the dining room table while they wait for the pickup. He’s in pajamas and the outcast is in her winter coat, looking stoic. They have nothing to talk about, you know, so he tries to apologize for the fact that his daughter is a bitch. [Laughter] He kind of implies she gets it from the wife…

All of that will still continue. [Cheers and applause] It is America. But, but you should vote. You gotta vote. Vote as many times as you can. [Laughter] Vote, and don’t just– Fill in every circle, every dot they have, fill it in. If a page says, “This page was intentionally left blank,” you write whatever you want on that. That’s your space as an American.

My nana is going to vote. She’s 94 years old. [Cheers and applause] Yes. Do you applaud for things that you don’t think are a good idea? [Laughter] And this is — look, this is my opinion, and I don’t think it’s going to be that popular. Why don’t we shut the door so no one hears it? [Laughter] I don’t think maybe she should vote. You don’t get to vote when you’re 94-years-old! You don’t get to order for the table when you’re about to leave the restaurant! [Applause] I’m sorry. That joke is ageist. That is wrong. It is wrong to say one age group is better than another. That would be like calling yourself the Greatest Generation. “Oh, we fought the Nazis!” Well, we’re trying to fight the new Nazis if you get out of the way and stop voting for people you saw in between coin collector commercials!

I love my grandma. I love my nana. You know, when you’re a little kid, you love your grandma totally. But, as you get older you start to be like, “why does that old lady make mom so nervous?” Something must have happened there. But my nana is a great, eccentric, wonderful person. I’ll tell you a story. When she was 88 years old, she didn’t like her driver’s license photo. She was still driving at 88, that’s not even the point of the story. [Laughter] She didn’t like her driver’s license photo. She thought it was not flattering. I take her side, I also thought it was unflattering. Mainly because it was a photo of an 88-year-old woman. [Laughter] Her plan was this. She was going to go to the Marblehead, Massachusetts, DMV and tell them she lost her license. She gets to the DMV, she said, I’ve lost my license, I need a new license and a new photo. The guy at the DMV says, “do you have any proof of I.D.?” She took out her license. She told me, “we stared at each other for a moment, then I said, you’ve caught me in a lie and I took my license and left.”

A couple of summers ago I was with my nana and I walked her to the car, I had to, not like when you walk a bridesmaid, I had to hold her up. And, I got her to her car. Her car’s like brown or gray, it has no brand, I think the government gave it to her. [Laughter] We get to her door, I get her to the car and I open the door. And, she looks at me and she says, “you know, I used to be Carolyn Stanton. But now everyone says I’m John Mulaney’s grandmother. Well, I want you to know that if I wasn’t your grandmother, I wouldn’t know who you are. Sorry!” [Laughter] And then she drove off.

We have a great show for you tonight. The strokes are here, ladies and gentlemen!

Stick around. We’re going to be right back. 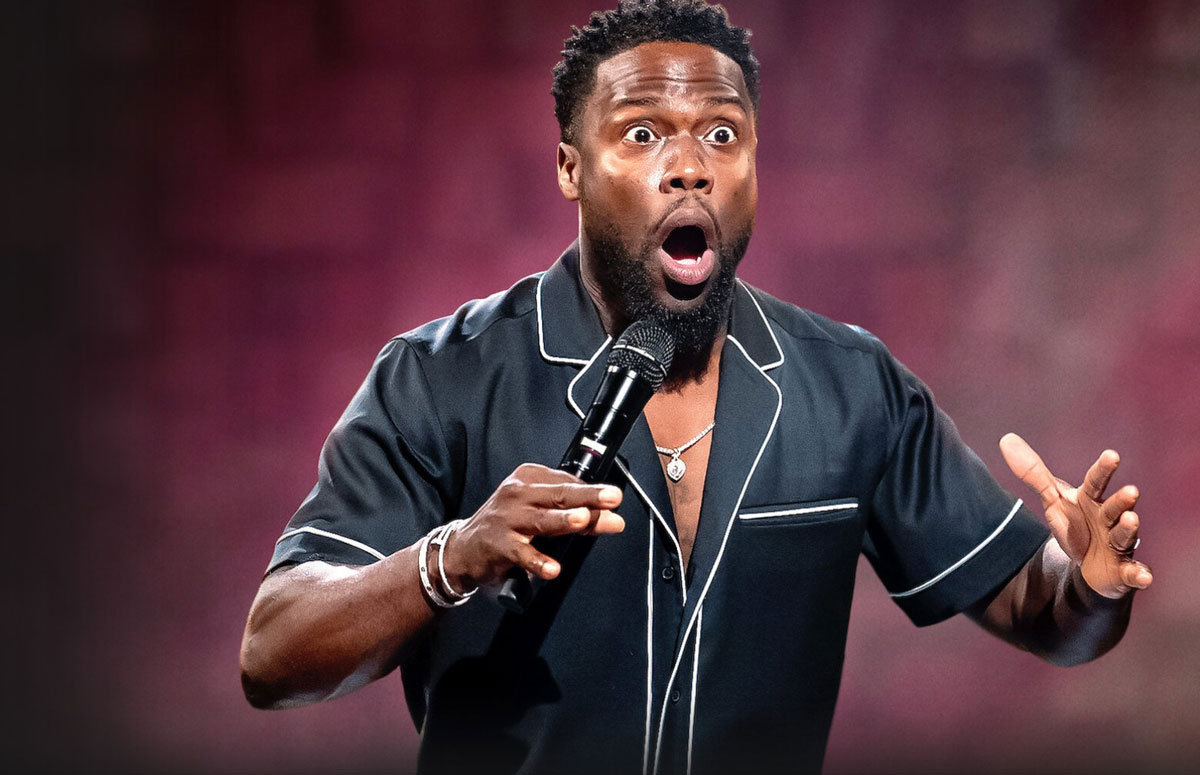 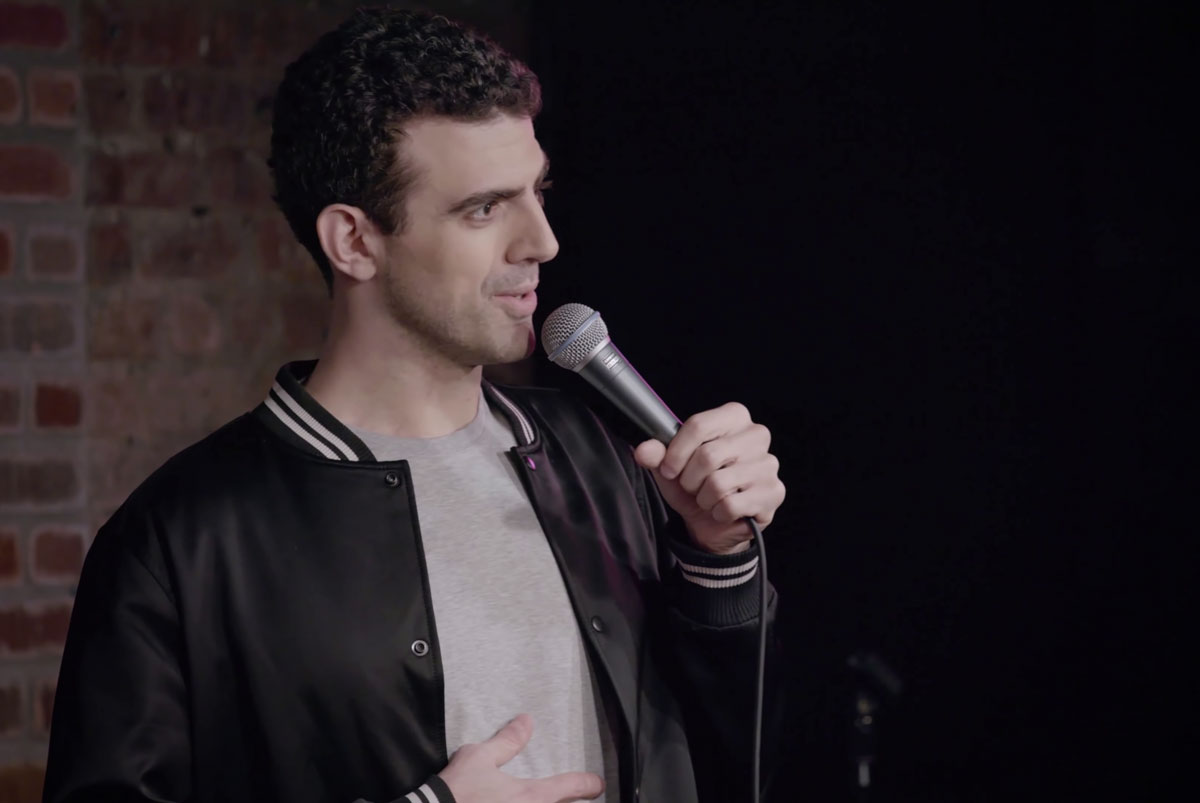 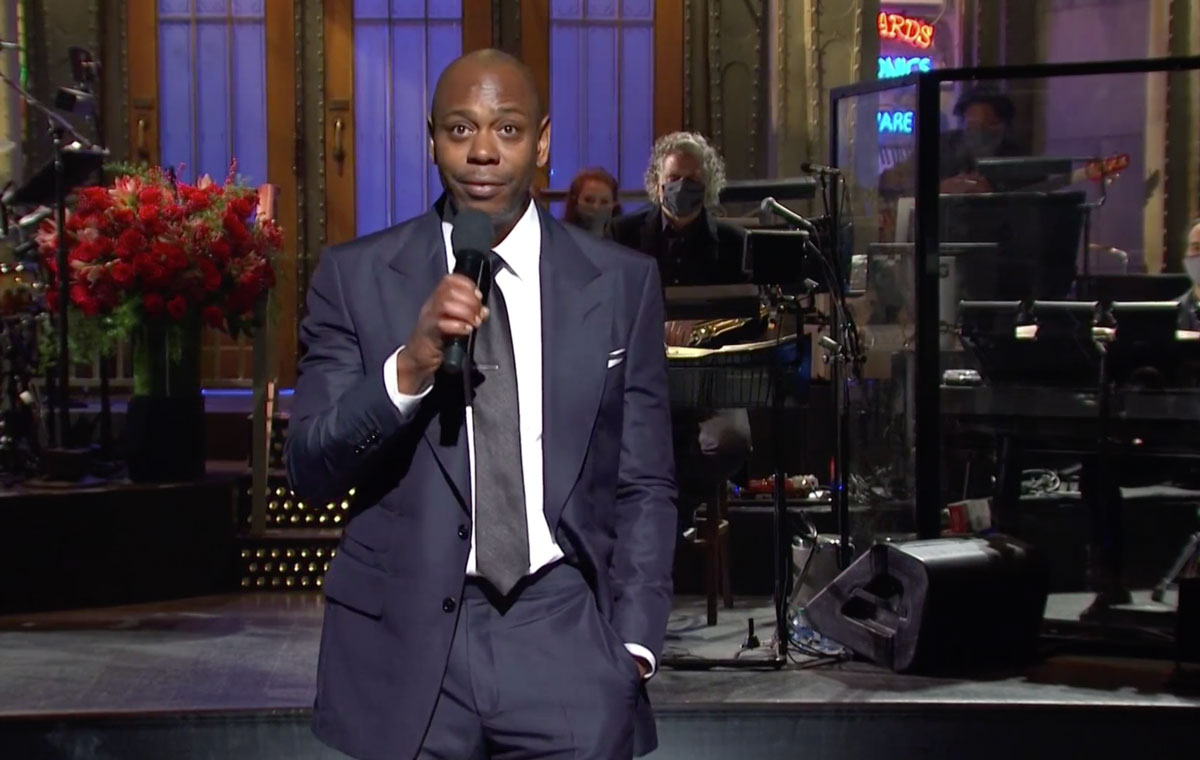 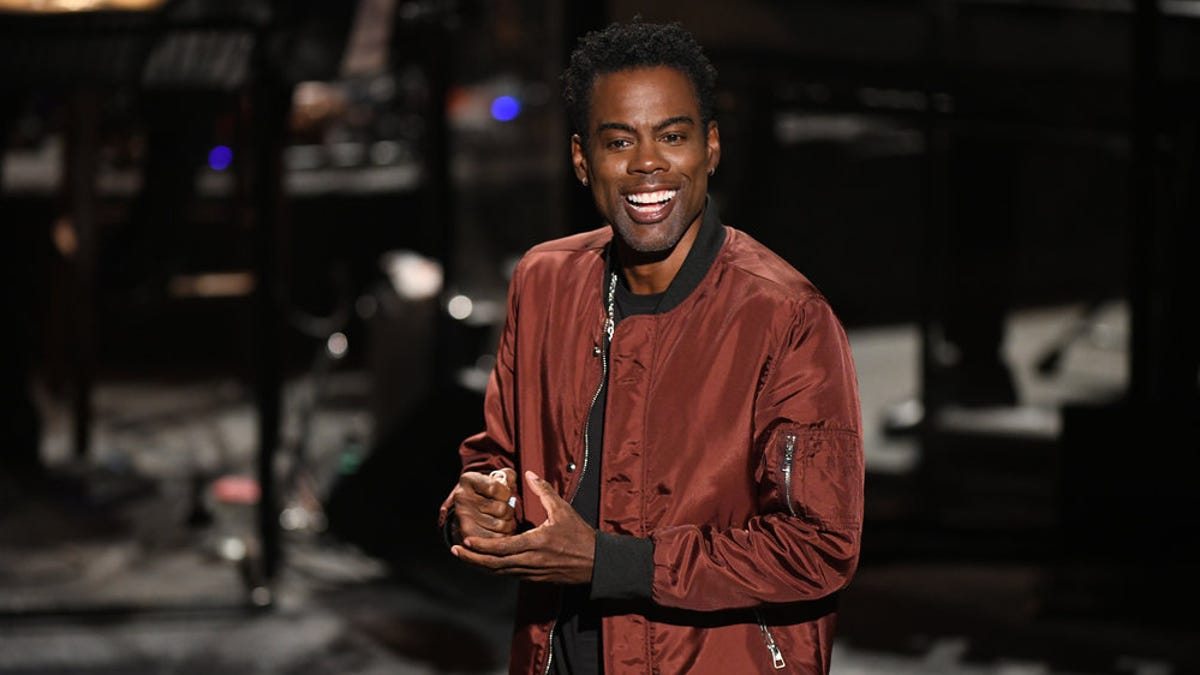