Spanish Flu: A Warning from History

In 1918, celebrations marking the end of the First World War were cut short by the onslaught of a devastating disease — the 1918-19 influenza pandemic. 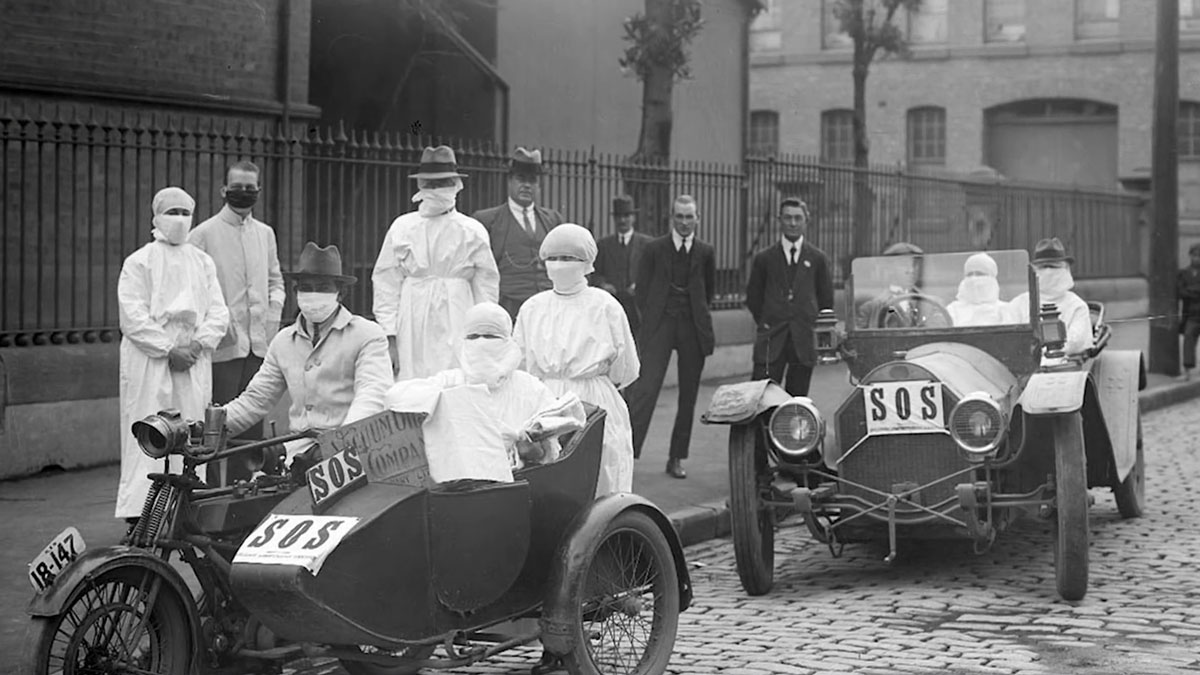 In 1918, celebrations marking the end of the First World War were cut short by the onslaught of a devastating disease — the 1918-19 influenza pandemic. Its early origins and initial geographical starting point still remain a mystery but in the Summer of 1918, there was a second wave of a far more virulent form of the influenza virus than anyone could have anticipated. Soon dubbed ‘Spanish Flu’ after its effects were reported in the country’s newspapers, the virus rapidly spread across much of the globe to become one of the worst natural disasters in human history.
To mark the centenary and to highlight vital scientific research, the University of Cambridge has made a new film exploring what we have learnt about Spanish Flu, the urgent threat posed by influenza today, and how scientists are preparing for future pandemics.

Perhaps until recently, Spanish Flu has been what some people call a “forgotten pandemic.’ But it was a huge global calamity. In terms of the number of deaths we’re saying 50 to 100 million – far greater than the casualties of the first world war. Roughly around May, April May 1918 when you know the carnage of the First World War is is graphic and horrendous but at the same time this this unknown enemy is starting to sweep through the US, Europe, the trenches and it is recorded by the Spanish press and it becomes dubbed as the ‘Spanish flu’ because they are neutral. Well, at the time in the 1920s they estimated that maybe 20 million had died. By the late 20th century that figure it went up to 25 million. In the 21st century with scientists and historians now getting together to work much more closely, that figure has now been upped to fifty to a hundred million people killed. This virus killed more people in the first 25 weeks than HIV/AIDS has killed in 25 years – horrendous! Those mortality statistics are staggering.

We don’t know exactly why some flu strains are much more severe than others and why some of them would would be more likely to kill people or cause very severe disease.

What is particular about avian and pandemic viruses is that they replicate deep inside our lungs. When our cells detect this they trigger very strongly an immune response this leads to an influx of white blood cells and fluids into our lungs and it restricts the amount of air space that we have to breathe.

The symptoms are very graphic and very very striking so you know it’s said that some people drowned in their own phlegm, so if it was hitting or effecting the lungs – people were spurting blood from their ears and their noses. Descriptions of people turning blue or purple so you know it was really really severe and people just dropping down in the streets

Those that succumbed to the flu were in the age group 20 to 40 years which is very unusual for an influenza epidemic or pandemic and scientists and historians are now still looking to see why.

There’s really two ways that people died in 1918 they either died from the initial flu infection or they died from a enormously strong immune response to that virus were their lungs just filled up with fluids from trying to attack the virus that got into their lungs.

So traditionally everyone sort of said oh well it’s the trenches you know the conditions of the war and that’s why it was so fatal but when you think well you know how did it spread so rapidly around the world to places that are not part of the theatre of war. I think the traditional explanation is it starts in Kansas in an army camp and then the troops bringing it over to the trenches, Europe but there’s still so many, many unknowns.

So mathematical modelers have long been interested in the 1918 pandemic and one of the questions is to try and disentangle how its spread around the world and exactly what the routes have been. Given a perfect data you could work backwards and try to infer where it’s come from. Whereabouts does it arrive in a country, does it arrive multiple times or thinking about multiple countries where is the first place? If you understand the origin of a pandemic then you understanding about where it’s come from and maybe you can stop that in future.

Almost certainly it was a bird flu originally but then we also know that that flu or something very similar to it was in pigs at the same time. Maybe it’s somebody who works very closely with birds or who works very closely with pigs or has some other exposure like that. One of the big really open questions in flu research and flu Public Health is “How does the virus adapt from one species to another, how does for example a virus in pigs or in Birds get into humans and then start transmitting?” Then the key question is – how does the virus then adapt within that person to stop being a pig virus or a bird virus and become a human virus? in other words to be able to transmit from human to human and it’s probably some very quick evolutionary process that is going on within that human and in many cases won’t be successful, but in a few cases will and that’s when the virus can start spreading between humans and become a flu pandemic and then stay in humans as regular seasonal flu.

Just as people were celebrating Armistice Day and there was hope that it was dying down but then it resurged and a far more deadly and virulent strain emerged. So this the second wave really spread like wildfire affecting a third or quarter of the population of the world and it was short-lived so it petered out not long afterwards maybe in 1920/1921 but it was it was in the sense short-lived.

What happened was is that virus continued to transmit among humans, in fact it continued until 1957 to transmit between humans and probably what happened there is that the virus adapted to humans. It wasn’t this avian or swine virus that came in and was accidentally more pathogenic in humans. In a lab here in Cambridge we study both seasonal flu and pandemic flu from the standpoint of how does the virus evolve? and how can we predict that evolution and make vaccines to try to artificially evolve the virus both in the laboratory and in the computer to understand what its gonna do next and to make vaccines against those strains that will evolve in the future. So this is the basic science of studying evolution trying to predict that evolution. Something that’s nobody has ever been able to do for a complex organism. And then working to use that understanding to make better vaccines. On the pandemic flu side we do a similar thing where we look to see how that virus is changing — that virus how it changes in birds and how it changes in birds and in other species and to try to see what possible variants out there might be but there might be and again to make vaccines that could protect against all of those variants that we see.

Flu is very difficult to eradicate because it’s constantly mutating and changing its genetic information. We work on the influenza virus and in particular on the enzyme that copies the genetic information of the virus when this enters our cells. Specifically we’re interested in how this enzyme can do this activity and how it inserts mutations in a viral genome that leads to the formation of the new strains to which we need to develop new vaccines. And we are also interested in when this enzyme messes up, how it triggers the innate immune resistant and helps cause disease.

We really don’t know why we haven’t seen a pandemic as deadly the 1918 pandemic. Scientists and public health officials are extremely concerned the national risk register which is the way that our government plans what are all the risks to civil society in the UK. There’s only two events that are up there in terms of the most catastrophic and that’s a terrorist event or a influenza pandemic. There is a real threat that there can be such pandemics, for example the H5 in the H7 flu viruses that have infected now close to 2,000 people and killed about half of them. There has been with the H7 viruses some transmission from human to human not very efficient and it hasn’t really taken off. If either of those viruses did adapt to really transmit well between humans, there’s a real concern that it could be as bad as the 1918 virus and this is why there is so much research done for the public good to try to understand what’s happening and so much work done by people in public health and preparing in hospitals in case something like that happens.

Well, experts like to say it’s not if- but when? Coming at it as a mathematician it’s happened a lot of times in the past, it’ll probably happen again. The 1918 pandemic is difficult because of lack of data but the most recent influenza pandemic we had was in 2009 and from that pandemic there is some very good data. If we understand how the 2009 pandemic spread maybe that tells us something we can use to help control future pandemics. We can’t stop them, the alternative is at least to allocate our resources better to try and reduce the number of cases in each place.

Looking back a hundred years to the last pandemic also invites the question of — a hundred years from now what will we be like in terms of how well we are protected against flu? Or what things we could do to protect ourselves in some situations? Surely we’ll be in a situation where we know more about what viruses are in the world and where they are, surveillance will be so much better. Surely we’ll be in a better situation where we have better drugs and better vaccines because we know more about the virus so we know more about its weaknesses, we know more about our immune systems and we know how to enable them to fight those pathogens better. At some point we will have a universal vaccine that will protect us against flu for the rest of our lives. When this is is a whole other question. There are a great number of approaches and really good ideas to doing this. There are already attempts at this that are at a quite advanced stage. It might be ten years from now, it might be twenty or thirty or forty years from now, we really don’t know.