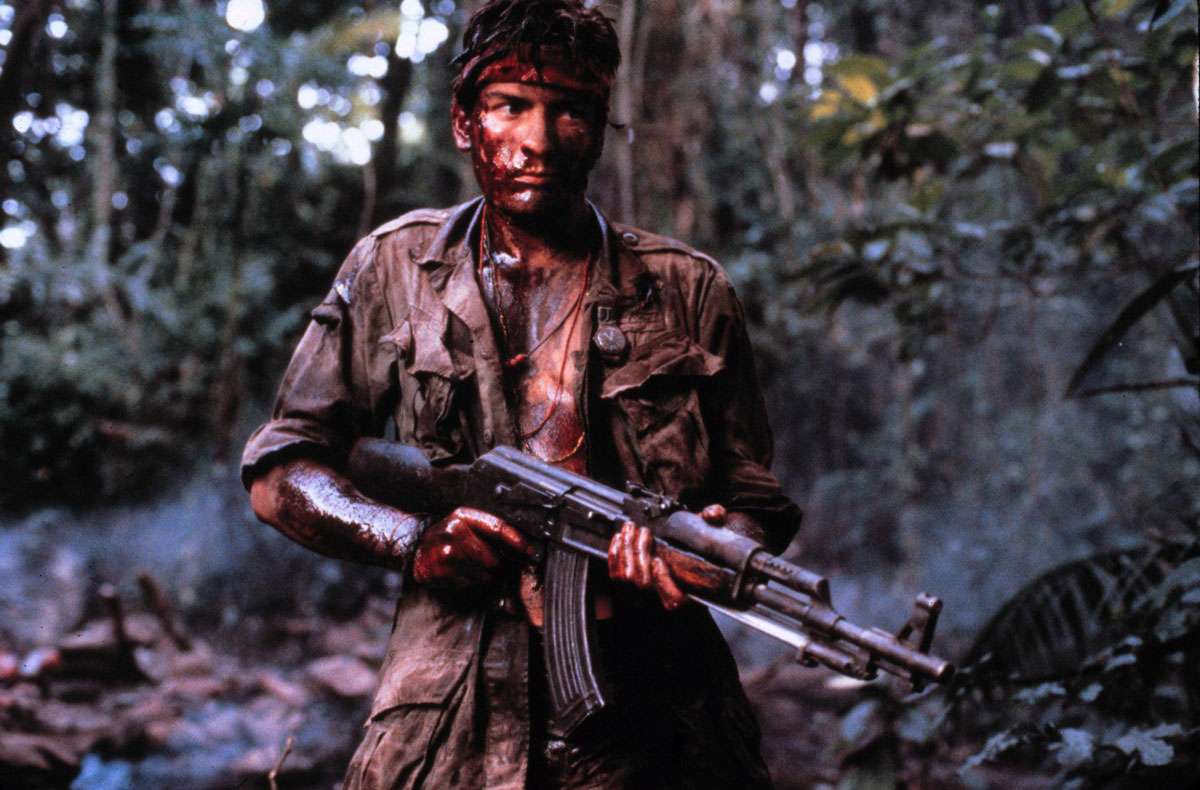 Oliver Stone, who wrote and directed Platoon, based on his own experiences, dropped out of Yale at nineteen, taught Chinese students in Vietnam, did a stint in the merchant marine, and finished a novel (in Mexico), which he couldn’t get published. Feeling, he says, that he needed to atone for his life of privilege and his individuality—that he had to be an anonymous common soldier—he enlisted in the Army, and on his twenty-first birthday, in September, 1967, he was on his way back to Vietnam, where he saw action with the 25th Infantry along the Cambodian border. In the next fifteen months, he was wounded twice and decorated twice.

He came home, he acknowledges, a freaked-out pothead; at one point, his stockbroker father paid off some people to get him out of jail for marijuana possession. In 1969, he enrolled in the N.Y.U. film school, where he had Martin Scorsese as a teacher and pulled himself together. “Scorsese gave me film as a way to use my energies,” he said to Peter Blauner in a recent interview in New York. We can surmise that Stone became a grunt in Vietnam to “become a man” and to become a writer. As Platoon, a coming-of-age film, demonstrates, he went through his rite of passage, but, as Platoon also demonstrates, he became a very bad writer—a hype artist. Actually, he had already proved this in his crude scripts for Midnight Express and Scarface. (He was also co-writer of Conan the Barbarian, Year of the Dragon, and 8 Million Ways to Die.) Stone has an action writer’s special, dubious flair: his scripts have drive—they ram their way forward, jacking up the melodrama to an insane pitch. Luckily, he’s a better director than writer.

Salvador, the early-in-1986 film that Stone directed and co-wrote, had a sensationalistic propulsiveness, and a hero (James Woods) whose hipster hostility was integral to the film’s whole jittery, bad-trip tone. I don’t think Platoon is nearly as good a movie. Although Stone was born in 1946, this is like a young man’s first, autobiographical—and inflated—work. Written in 1976, eight years after his war experiences, the script is swamped by his divided intentions: he’s trying to give us an account of what it was like to be an infantryman in Vietnam in 1967-68, and to present this in all its immediacy and craziness, but he’s also trying to compose a requiem for that war. The results are overwrought, with too much filtered light, too much poetic license, and too damn much romanticized insanity.

The picture begins with an epigraph from Ecclesiastes (“Rejoice, O young man, in thy youth!”), and then the music, Samuel Barber’s “Adagio for Strings” (which was used so chastely in The Elephant Man), comes on in a soupy orchestration by Georges Delerue—and the movie is grandiloquent before it even gets rolling. The first images draw us in, though: Charlie Sheen’s twenty-one-year-old Chris Taylor—the Oliver Stone character—arrives in the confusion of Vietnam, and the plane that brought him is loaded with body bags for the return trip. Just about everything to do with Chris’s initial disorientation, his getting to know the men in the platoon, and the pre-dawn jungle ambush in which he sees the enemy advancing but is paralyzed with fear and can’t warn the other men, and then is wounded, has dramatic life in it. So does the small talk. There’s a good, if perhaps too eloquent, sequence with the men in a hooch, drinking and doping, listening to rock ‘n’ roll and dancing; in a psychedelic, homoerotic bit, an older soldier blows pot smoke through a rifle and Chris inhales it—it’s like the seductive smoke-through-the-prison-wall in Jean Genet’s Un Chant d’Amour. And there’s a fine, scary scene in which the men are attacked in their foxholes and the bursts of fire are like a light show in the middle of a nightmare.

There are scenes unlike any I’ve seen before, in which we can see the soldiers’ frustration, and how they’re caught in a revenge fever. Then, when they take a small village suspected of aiding the Vietcong, their rage against the villagers builds in waves and finds release in violence against animals, a helpless grinning idiot, women, children. The film shows Chris taking part in the cruelty and then gaining control of himself, and grasping at first hand what many of us at home watching TV grasped—that whether the Vietnamese won or lost in the fight it was what we were doing to them that was destroying us. The film is about victimizing ourselves as well as others; it’s about shame. That’s the only way in which it’s political; it doesn’t deal with what the war was about—it’s conceived strictly in terms of what these American infantrymen go through.

Platoon has many things to recommend it, but its major characters aren’t among them. Chris is a pleasant-faced blank—not the actor, the character—and, regrettably, he narrates the movie by reading aloud the letters he writes home to his grandmother. You might think that Stone would be too hip to add the explanatory emotions this way—particularly after Sheen’s father, Martin, recited the tormented, purploid prose that Michael Herr wrote for the narration of Apocalypse Now. The voice-overs here are perhaps even more stupefying, since they’re easier to comprehend. They’re populist sentiments reminiscent of the Joad family conversations in The Grapes of Wrath.

Well here I am—anonymous alright, with guys nobody really cares about—they come from the end of the line, most of ’em small towns you never heard of—Pulaski, Tennessee, Brandon, Mississippi, Pork Bend, Utah, Wampum, Pennsylvania. Two years high school’s about it, maybe if they’re lucky, a job waiting for ’em back in a factory, but most of ’em got nothing, they’re poor, they’re the unwanted….
They’re the best I’ve ever seen grandma, the heart and soul—maybe I’ve finally found it way down here in the mud—maybe from down here I can start up again and be something I can be proud of, without having to fake it, be a fake human being. Maybe I can see something I don’t yet see, learn something I don’t yet know.

It’s like some terrible regression. Stone’s gone back to being a literary preppy.

He’s thinking like a preppy, too. Chris finds two authority figures in the platoon: the two sergeants, who were once friends, and are personifications of good and evil. Willem Dafoe’s Sergeant Elias is a supersensitive hippie pothead, who cares about the men—he’s a veteran fighter who’s kept his soul. Tom Berenger’s Sergeant Barnes is a kickass boozer—a psycho, whose scarred, dead-eyed face suggests the spirit of war, or the figure of Death in a medieval morality play. The movie is about the miseries of Nam, but it’s also about the tensions that develop between the factions in the platoon who line up with one or the other—Love or Hate, Life or Death, Christ or the Devil. And it’s about Chris’s learning—and, worse, telling us—that “we weren’t fighting the enemy; we were fighting ourselves,” and, yes, that he feels “like the child of Barnes and Elias.”

This melodramatic shortcut—and Stone’s reduction of all the issues of the war to make them fit the tags “good” and “evil”—may make you wonder if he is using filmmaking as a substitute for drugs. (The picture itself, in representing the heads as the good guys, makes a case for the socializing, humanizing qualities of dope; God Himself seems to be on the side of the dopers.) Stone is in such a hurry to get a reaction out of us that he can’t bother to create characters with different sides. The two sergeants are posed and photographed to be larger than life, but the roles are underwritten. Dafoe’s tough, courageous Elias is like a young Klaus Kinski playing innocent miss, and Berenger’s glamorous, scarred-up Barnes, who has been shot seven times but can’t be finished off until he wills it, looks as if he were a killing machine carved out of jagged rock, though he moves with a slithering grace. The two are mythic figures out of nowhere—Elias who’s high only on drugs and goodness, Barnes who’s high on war. The men in the platoon may suddenly be trashed by a line. Round-faced Forest Whitaker, who plays gentle Big Harold, is going along all right until after the atrocities against the villagers, when he has to say, “I’m hurtin’ real bad inside.” That’s the end of his performance.

Stone tries for bigger effects than he earns. When he doesn’t destroy things with the voice-over banalities or a square line of dialogue, he may do it with a florid gesture, such as having the Christus, Sergeant Elias, run away from the Vietcong who are firing at him, ran toward a departing helicopter, which is his only chance for life, and lift his arms to Heaven. There are too many scenes where you think, It’s a bit much. The movie crowds you; it doesn’t give you room to have an honest emotion.

You knew you were getting pulp in Salvador because it was grungy; here the pulp is presented pedagogically, and it’s made classy and meditative, but it’s laid on thick—that idiot gets his head bashed in by Americans trying to wipe the grin off his face. Is it powerful? Sure it is. (This kind of routine played well in the twenties and thirties, too, when the bad guys in Westerns did it, and it wasn’t as graphic then.) Stone has talent: he shot this epic in the Philippines on a tight budget—roughly six and a half million dollars. He’s a filmmaker, all right, but he lacks judgment. Just about everything in Platoon is too explicit, and is so heightened that it can numb you and make you feel jaded. You may suspect that at some lowdown level Stone (he appears as the major blown up in his bunker at the end of the film) is against judgment. Elias is supposed to represent true manliness, but if Stone’s other films tell us anything—if this film tells us anything—it’s that he’s temperamentally more on the side of the crazy stud Barnes. The preppy narration extolling the nobility of the common man is worse than a “privileged” boy’s guilt—it’s a grown man’s con.

Stone’s moviemaking doesn’t suggest that he was a young, idealistic Chris Taylor going to war to find himself in the comradeship of the anonymous but, rather, that he was a romantic loner who sought his manhood in the excitement of violent fantasy. Stone seems to want to get high on war, like Barnes. The key scene in the movie is directed so that it passes like a dream. In a remote area, Chris calmly, deliberately shoots a fellow-soldier. There is no suggestion that Chris is an innocent corrupted by having got used to violence. The murder is presented as an unambiguous, justified execution. This oddly weightless pulp revenge fantasy is floating around in Stone’s requiem, along with a lot of old-movie tricks.

I know that Platoon is being acclaimed for its realism, and I expect to be chastened for being a woman finding fault with a war film. But I’ve probably seen as much combat as most of the men saying, “This is how war is.”