In Little Big Man, Arthur Penn uses the mode of comic elegy in order to sustain a reverent feeling for the American past without falling into sentimentality 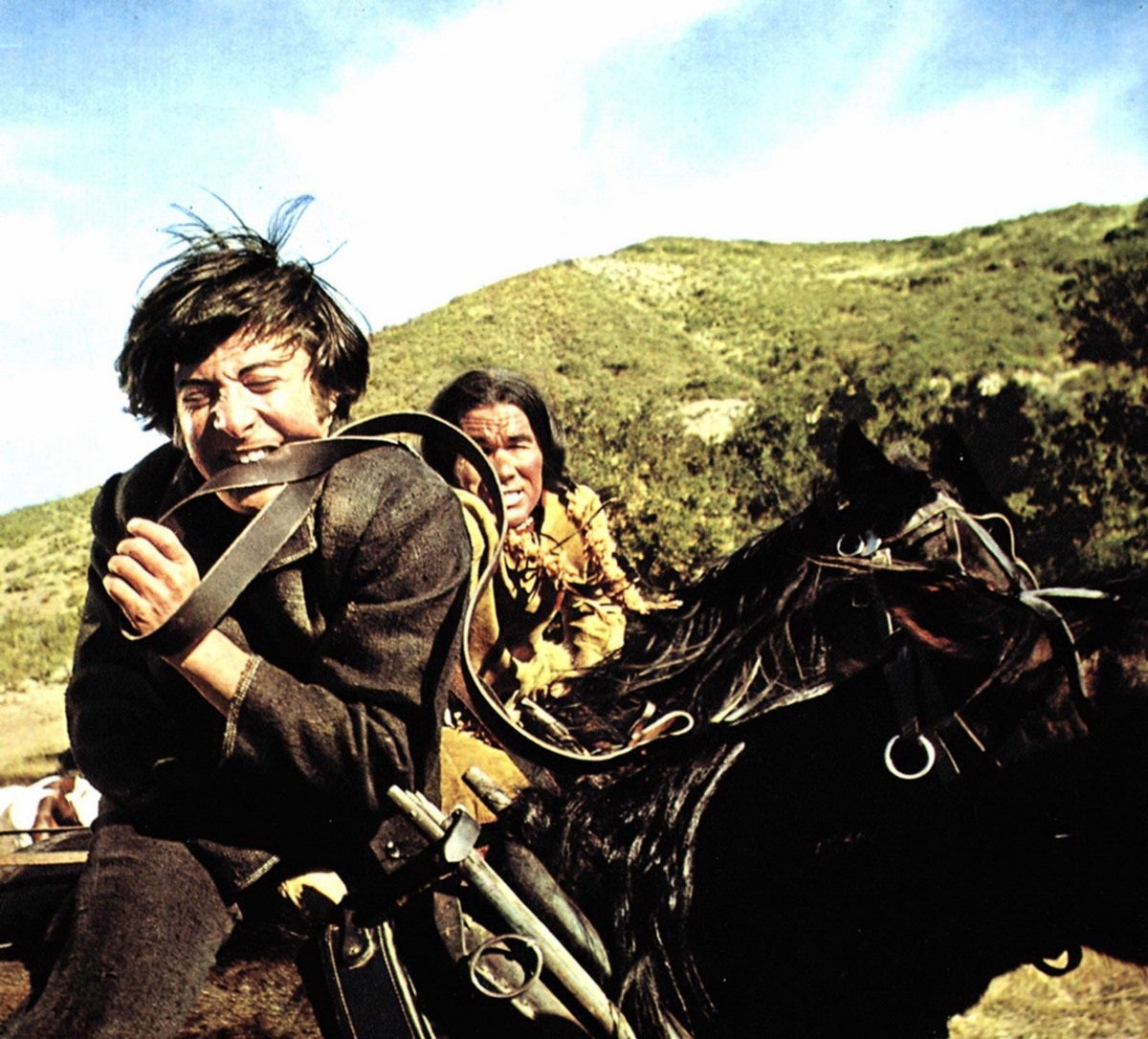 In Little Big Man, Arthur Penn uses the mode of comic elegy in order to sustain a reverent feeling for the American past without falling into sentimentality (his Alice’s Restaurant was an elegy for the present, or at least for certain ideals of the present destroyed by madness and violence). Penn’s version of the Old West, adapted by Calder Willingham from Thomas Berger’s 1964 novel, is bathed in legend, exaggeration, and nonsense; it is the past transfigured in the telling, made accessible to the present through comic stylization and an ambiguous, partly farcical treatment of violence that is purely contemporary. If, at the same time, Penn had been able to resist imposing certain ideologies of the present onto the past, he might have made a great movie.

Little Big Man is probably as close as sophisticated men can come to a genuine folk version of the Old West. Its central character, Jack Crabb (Dustin Hoffman), is not so much a hero as an Everyman—an essentially passive recorder of vivid experience. American history happens to him, runs over him, and fails to break him. At the beginning and end of the movie we see him in some time vaguely the present, grotesquely alive at the age of 121. The movie consists of his reminiscing over his life as Indian fighter, general-store owner, con man, hermit, drunk, and occasional member of a Cheyenne tribe that raised him and that he comes to love. Forced to suffer through the slaughter and near-extermination of these Indians by the U. S. Cavalry, Crabb finally faces his enemy, General George Armstrong Custer, and tricks him into standing his last at the Battle of the Little Bighorn.

The movie tells wonderful lies, but it often has the spirit of actuality in a way that ordinary lying westerns do not. The obvious tall tales show up the less obvious absurdity of what we were once asked to believe in. Yet it’s not a spoof; it’s a movie that is reverent about certain human qualities—particularly those embodied in the slaughtered Cheyenne. Crabb himself is decent, competent, hopeful, and neither outstandingly courageous nor weak; life is sordid, absurd, and, as Crabb always survives, surprisingly persistent in its ability to make him suffer. Although Crabb as a character is not too highly individualized, one comes to respect his clear-sightedness, freedom from rancor, and acceptance of both pleasure and pain; he’s a kind of higher spirit of common experience. Perhaps he’s the perfect protagonist for a western that tries to do away with both the heroic style and the chamber-of-commerce morality that animate most examples of the form. The typical western hero, although he operates by himself or with only a sidekick, usually serves the interests of the great expansion, the great destiny; Crabb just wants to survive—until the great destiny kills everything he loves. How he finds the strength to survive afterward, we never know.

To make Crabb a credible folk representative, the plot involves him in many incidents and with many people. Most of this material parodies familiar movie conventions. With certain notable exceptions, Penn keeps the sense of reality in these adventures slightly deranged; this stylization tells us in each case how to respond to the material, and it doesn’t always work.

It works best in the sequences dealing with Crabb’s gun-fighting phase. First Carol Androsky, as Dustin Hoffman’s sister, teaches him how to make “snake eyes” and “shoot before touching your gun.” With this marvelous skill perfected to the extent that he can shoot three bottles thrown in the air at once, Hoffman strides into town, slipping and sliding on planks laid across the incessantly muddy streets, decked out in the fancy black clothes of the movies’ born killers, his hair slicked up, his voice small and tight like Audie Murphy’s. So far Penn has been gently mocking our belief in the power and glamour of movie gunslingers; but when Hoffman teams up in a bar with Jeff Corey (the character actor with Edward Teller eyebrows), who plays an extremely jittery Wild Bill Hickok, the tone moves further out into an eerie, nervous hilarity and finally explodes in our face with bloody violence. The absurd conventions we believed in always culminated in death, but when we actually see it with pools of blood, we want to turn away like the nearly fainting Crabb.

An example of stylization that fails is the recurring business with Faye Dunaway as the minister’s wife who praises chastity and purity but can’t keep her hands off men. Her exaggerated fluttering and posturing, which seem to parody the hypocrisy of the “good woman” in westerns, only lift the scene into the realm of different conventions—those of bad Victorian pornography, with its coy naughtiness. Nor does the repeated demonstration of Custer’s prancing vanity work much better (although it is entertaining); as the villain of the movie, responsible for hundreds of deaths, he needs more depth, more development. Again we are moved from one unsatisfying convention to another—from noble heroism, the responsibility of leadership, and so on, to its nagging Mad-magazine parody, which can see only madness in heroism (for there’s no doubt that the historical Custer was a hero, of a sort).

This playing with our memories and movie conventions reaches its height in the scenes set in the Cheyenne camp. Penn appears to have set himself two tasks with the Indians: first, to do away with the mumbo jumbo, the ignorant superstition, and the racist fears that have almost always characterized movie portraits of Indians; and second, to end the hypocrisy of those liberal westerns which have shown Indians being betrayed by treacherous whites, only to frighten the audience in the end with the Indians’ aroused savagery —which justifies their slaughter.

These Indians speak in full sentences rather than grunts, they show a fairly wide range of personal characteristics, and although they are full of ritual and mystery, there’s no spooky medicine man in sight, and they don’t spend much time howling and dancing around the fire. It is not until late in the movie that we realize that we are being shown the gentleness, relaxed sexuality, and ignorance of technology that often characterize history’s victimized civilizations. At the center of the community sits Old Lodge Skins (played by Chief Dan George), an elegant and kindly gentleman who is set up in the movie as an obvious contrast to Custer. He expounds the Indian view of life at considerable length, and just when we’ve had about enough and it’s all getting a bit sanctimonious, Penn gently pulls the rug out from under him.

Nevertheless, Old Lodge Skins conveys the message of the movie: he explains the Indians’ animistic philosophy to Crabb, claiming that they see life in everything—in earth, stone, and water; whereas for the white man, “everything is dead.” We might accept these remarks if they weren’t meant to carry so much weight: the whole latter half of the movie weaves Crabb’s story into an account of Custer’s genocidal compaigns against the Indians, and there’s no interpretation other than Lodge Skins’s for what happens. From the evidence of the movie, the whites didn’t kill the Indians because they wanted the land, water, and skins, or because they were afraid of them, or even because they were racists. They killed them because it is the nature of white men to kill. And this sort of tautology is itself the essence of racism. Of course it’s a new hip racism that will be very popular with certain sections of the young audience.

The two scenes of Indians being massacred are staged straight for terror and horror, rather than in the farcically scary style of the rest of the movie’s violence (when the Indians themselves attack a stagecoach, for instance, it tips over going around a bend like an automobile in a Sennett two-reeler). The slaughter of the Cheyenne is particularly horrible, since we’ve come to know this community from the inside, but I don’t suppose Penn trusted either himself or the audience sufficiently to do it any other way. I myself went dead on both these sequences, a victim of too many movie slaughters. My mind registered horror but I felt nothing. But there’s no doubt that the scenes are intended to build up rage against whites, and they had that audible effect on other people in the theater. How can this rage be released? By another slaughter, of course, the slaughter of Custer and his men, which is the climax of the movie, and here again we are back to farce, with Custer ranting and staggering about until he falls flat on his face, seemingly knocked over by the two arrows that land in his back and that wind up pointing, like little flags, to the sky.

Leaving aside the question of Penn’s altering the tone of the movie according to who is being slaughtered, I question the artistic and political ethics of building up the desire for revenge in the audience. Not only does it place the audience in a poor moral position, not only does it weaken the sense of outrage that the rest of the movie establishes, but it also contrasts badly with Crabb’s narrative tone, which dwells on the sense of loss and is free of the ideology’ of hate. What starts as an elegy for lost values winds up as an exercise in white self-hatred, and although it may seem incongruous to say so, I can’t help feeling that Penn’s movie is another victim of the war in Vietnam.