Stanley Kubrick's Full Metal Jacket establishes its grip on the viewer's attention instantaneously, with an opening scene in which young recruits are shorn by an off-screen Marine Corps barber, while a corny, lulling song is heard in the background ("Kiss me goodbye and write me when I'm gone/Goodbye sweetheart, hello Vietnam"). 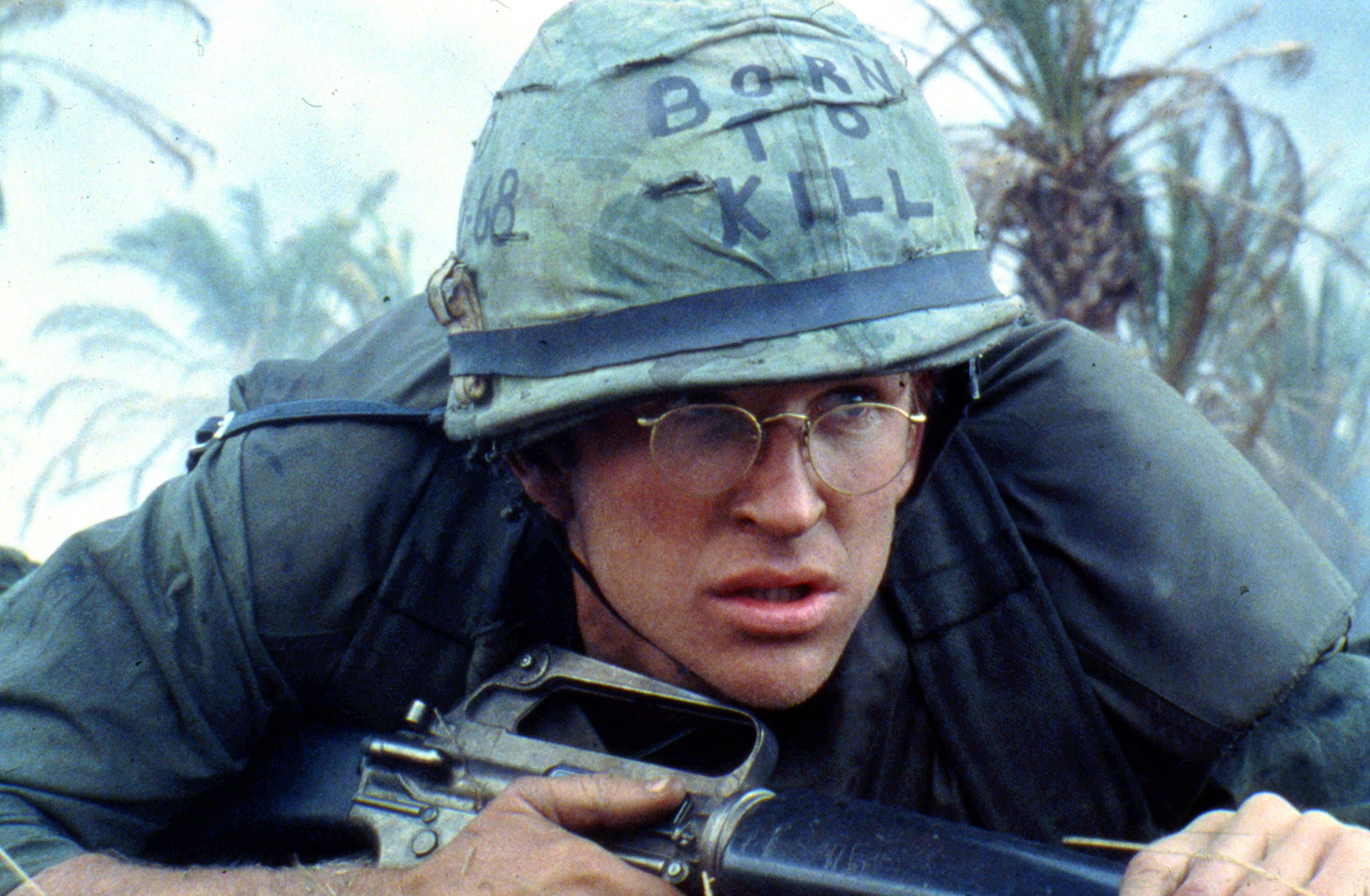 Inside the ‘Jacket’: All Kubrick

Stanley Kubrick’s Full Metal Jacket establishes its grip on the viewer’s attention instantaneously, with an opening scene in which young recruits are shorn by an off-screen Marine Corps barber, while a corny, lulling song is heard in the background (“Kiss me goodbye and write me when I’m gone/Goodbye sweetheart, hello Vietnam”). The scene would be ordinary, even a cliche, were it not for the look on the young men’s faces. In their eyes we see absolutely nothing: no apprehension, no bravado, not even blind obedience, only the emptiness of clay ready to be molded.

The sense of sheer animal helplessness, conveyed with the seeping white light, uncluttered frames and daunting angles of which Kubrick is a master, is a shock. It’s also a challenge to the audience to remain mindful of these men’s humanity, despite the brutal and dehumanizing ordeal to which they will be subjected.

This opening scene is something else as well: It’s an announcement of the cool, merciless perspective of Stanley Kubrick, whose directorial distance from the inner workings of his characters has always been extraordinary. In Full Metal Jacket, that distance allows Kubrick to take a frighteningly clinical view of the process by which fighting men are molded. He presents the gradual and deliberate assault on individuality and privacy that is basic training; the connections between sex and aggression; the combat soldier’s ultimate and even stirring realization that he has left his better nature far behind him. Kubrick’s vision of this process is infinitely more troubling and singular than the one set forth in Oliver Stone’s Platoon.

Comparisons between these two films are as specious as they are inevitable, for their directors appear to have aimed for very different effects. But Platoon, as the film that has most definitively brought the Vietnam experience home for moviegoing America, stands as a kind of box-office landmark, and Full Metal Jacket appears at least superficially to cover similar terrain. Harrowing as both of these films are, their effects are very different. “Platoon” conveys the day-to-day physical experience of men at war with exceptional realism, while Full Metal Jacket has a more abstract and typically (for Kubrick) elliptical style. While Platoon develops a relatively conventional narrative, Full Metal Jacket has a separate prologue (as 2001 did) and a less linear structure in which storytelling is less central than the distinct, indelible images Kubrick has created.

If “Platoon” accompanies its brutal realism with the ennobling sounds of Samuel Barber’s “Adagio for Strings,” Full Metal Jacket takes the opposite tack. It scores the sharply poetic imagery to be found here with the most soulless and banal American popular songs imaginable, from “These Boots Are Made for Walking” to “Surfin’ Bird” ( Kubrick, with his use of a children’s song in the film’s last scene, even manages the kind of heavy irony that would sink anyone else, and that in his hands becomes bone-chilling.) Perhaps most important, Platoon is a film that anticipates and manipulates every response that its audience has. Full Metal Jacket, while no less wrenching, allows no easy catharsis, no comfortable understanding. In that, it has more in common with Kubrick’s own work than it does with any other film about the Vietnam War.

It’s a mistake to look to Kubrick’s films for easily encapsulated attitudes; even his earlier war film “Paths of Glory” (1957) was strikingly anomalous for its time. The Shining is no ordinary horror film, any more than 2001 is a simple, reductive vision of life in space. Kubrick, in adapting material as varied as Anthony Burgess’s Clockwork Orange, Stephen King’s Shining, Thackeray’s Barry Lyndon, Nabokov’s Lolita, Terry Southern’s Dr. Strangelove and now Gustav Hasford’s Short-Timers, the novel on which his new film is based, has always extracted and shaped elements from these books into films that are never slavishly faithful to their sources. What finally matters, in his films, is less their identifiable ideas than their vast and genuine staying power. The pure mystery of his monolith (in 2001), the stark, empty corridors of his haunted hotel (in The Shining,), the exquisite and ironic perfection of his 18th-century landscapes (in Barry Lyndon) are as elusive as they are unforgettable.

The basic training episode in Full Metal Jacket will have that same long-lasting impact, as will the extended combat sequence, near the film’s end, that culminates in a transcendent image of war and its horror. In between, briefly, the film (co-written by Michael Herr, Hasford and Kubrick) takes a journalistic tone that only underscores how much more haunting Kubrick’s work is when he avoids the verbal and the literal. When American soldiers try to explain their feelings about the Vietnamese people, the war itself, even the landscape (it’s a land without horses, the Texan nicknamed Cowboy complains), they are only echoing what we already know. But when Kubrick films a group of soldiers gathered around a writhing prisoner, in the ruins of a structure that’s as much like a temple as a military headquarters, with the full import of their role made clear to all of them, he creates a visual epiphany that no viewer could forget, and no combat journalist could easily equal.

Even more involving, in its way, is the basic training episode that serves as a prelude to the events in Vietnam. Basic training, with its grueling workouts and its colorfully obscene invective, is as basic a convention as the war film has; we’ve all seen this before. But we haven’t seen it done as it’s done here. Kubrick devotes about 45 relentless minutes to a process that is as overwhelming for the audience as it must be for the recruits. And in doing that, he also takes care to maintain the viewer’s critical distance.

So the audience can experience what is being done to these men and think about it, too: about the way the drill sergeant (played by Lee Ermey, himself a former Marine sergeant and a man with extraordinary lungs) deliberately violates every racial, sexual and personal taboo as he hectors his men, infantilizing them (he makes them sleep holding their rifles, march holding their genitals) so as to reconstruct them along different lines. The title refers to a shell casing, a kind of model for the tough, hollow fighter who will emerge from this ordeal; it’s also a reference to the misfit in the group (a figure of astonishingly real anguish, as played by Vincent D’Onofrio) for whom this training most conspicuously backfires.

No one who sees Full Metal Jacket will easily put the film’s last glimpse of D’Onofrio, or a great many other things about Kubrick’s latest and most sobering vision, out of mind.