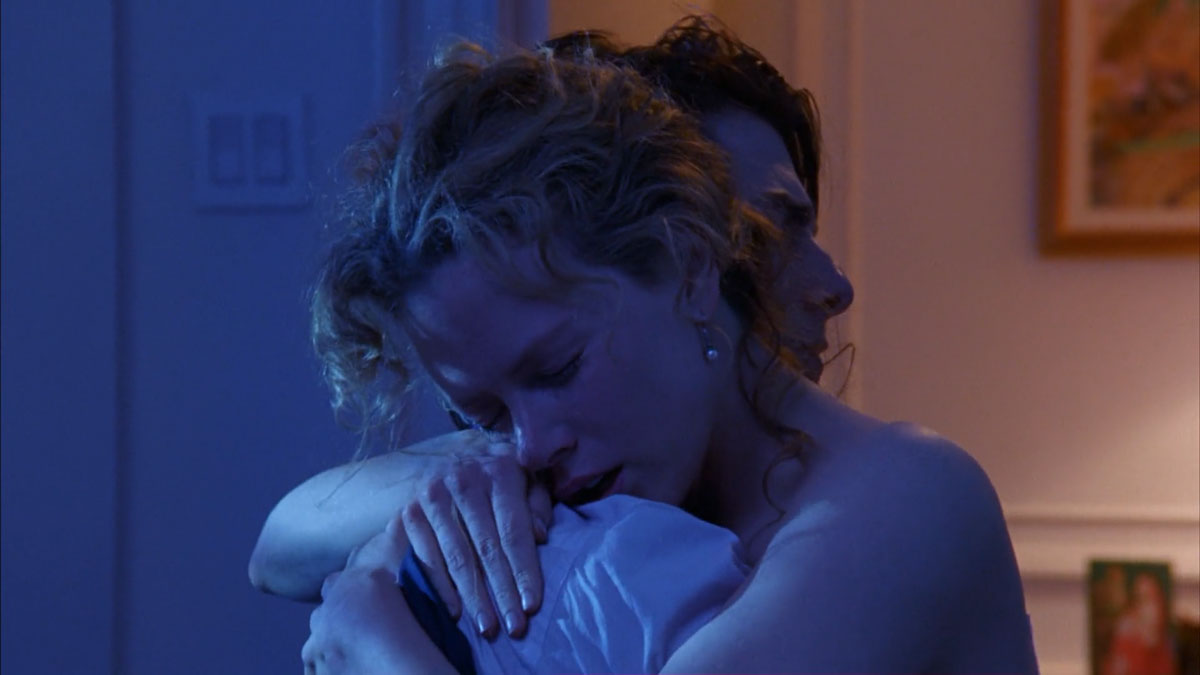 Stanley Kubrick’s Eyes Wide Shut, from the screenplay by Frederic Raphael, inspired by the novella Traumnovelle (Dream Story) by Arthur Schnitzler, did not live up to all its advance hoopla at the press screening I attended, but then what could, short of the Second Coming? There was no applause, but there was no booing, either, and this is where the movie stands, halfway between hit and flop, Viennese sausage and chopped liver, ridiculously though intellectually overhyped for the very marginal entertainment, edification and titillation it provides over its somewhat turgid 159-minute running time.

What surprised me the most, however, was the sketchy and episodic structure of the narrative, the feeble attempts at melodramatic tension and suspense, and the clumsily corny and anticlimactic ending with its halfhearted four-letter-word mantra. Still, if you have not yet seen the picture, read no further, because I intend to analyze the plot in some detail in order to suggest where I think Kubrick went wrong or simply outsmarted himself.

To begin with, the first glimpse of Nicole Kidman’s Alice Harford seen from the rear in a state of dishabille keys her character to an anti-erotic narcissism that precedes her later manifestation as an outwardly normal wife and mother. The point is that it is usually more exciting to go from straight to kinky than from kinky to straight. But then Ms. Kidman has made a cottage industry out of her nudity and near-nudity, both on stage in David Hare’s The Blue Room and in all the publicity photos that have been streaming out of Fortress Kubrick in England for what seems like eons.

Indeed, for much of the movie Ms. Kidman does not so much act as pose. She is constantly striking attitudes with her arms, head movements and the singsong rhythms of her line readings. She and Gwyneth Paltrow are the two most actorish actresses on the screen today, though it must be conceded that both can be effective in powerhouse situations even if they seem merely affected the rest of the time.

Where is Tom Cruise, you may be asking at this point. It’s a good question. In the role of the sexually look-but-don’t-touch antiseptic WASPish New York doctor William Harford, Mr. Cruise takes up most of the plot, gravitating from jealous anguish over his wife’s self-confessed imaginary infidelity to brow-furrowing shame over the possible murders of two friends who tried to help him during his long night of self-degrading Odyssean torment.

For his part, Mr. Cruise does not so much act as react to a series of spectacularly charismatic women who lust after him but who are denied through one plot gambit or another, even though Mr. Cruise is supposed to be on the town and on the prowl. What a grotesquely self-serving chastity for a still-bankable male star trying to retain a portion of his Top Gun – Mission Impossible teenage constituency for an unfashionably “adult” property of the kind Leonardo DiCaprio is reportedly ready to kill for. Ho-hum, every woman I encounter loves me, but I remain faithful to my wife both on and off the screen, at least technically.

Is this supposed to be a taboo-shattering movie about sex in New York in the 90’s or even Arthur Schnitzler’s Vienna in the 1890’s? Mr. Cruise’s joy-killing tears and moral scruples remind me more of L.B. Mayer than Sigmund Freud. Guilt is all right in its place, but let’s see something spicy to get guilty about.

I can’t remember being made so aware of how much Ms. Kidman towers over the diminutive Mr. Cruise when they are standing together side by side. The subterfuges Hollywood once devised to make pint-size Humphrey Bogart look taller than bigger women like Ingrid Bergman and Audrey Hepburn went by the boards when Dustin Hoffman gazed manfully at Vanessa Redgrave’s midsection in Agatha (1979). Still, Mr. Cruise may eventually pay a price with his fans for allowing Kubrick to dwell almost sadistically on the size disparity in his marriage to Ms. Kidman.

Curiously, despite all the lurid rumors in the checkout-counter tabloids and on the unbridled Internet, there is very little suggestion of conjugal sexuality on the screen between the two lead characters. The only spasms of eroticism occur first when Ms. Kidman’s Alice confesses to Mr. Cruise’s Bill that she was once so powerfully attracted to a naval officer dining at the Cape Cod hotel where Bill and Alice were vacationing, that if this magnetic creature had asked her to sleep with him, she would have abandoned her husband and child and whole New York existence to follow this subject and object of her desire to the ends of the earth. Fortunately or unfortunately, she and the naval officer never got beyond exchanging glances before he left her life forever.

Alice’s “confession” follows a smug assertion by her husband that men are more driven by raw sexual desire than are the members of the fairer, more practical and more security-seeking sex. Bursting into uncontrollable laughter, Alice screams that complacent husbands like Bill have no idea of the fierce sexual demons raging in even the most seemingly quiescent women. This feminist explosion constitutes the best bit of acting Ms. Kidman executes in Eyes Wide Shut, and sets the stage for the images in Bill’s mind–visualized on screen–of her being willingly ravished by an anonymous stranger. Thus, even in terms of Arthur Schnitzler’s source novella, the Kubrick-Raphael adaptation is a bit of a tease to accommodate the future career images of a big-bucks star couple. Ironically, the imaginary seduction of Alice is infinitely more erotic on the screen than the real-life-in-the-movie masked revels that have provoked the cynically promoted anticensorship buzz.

We now all know that Kubrick was not only a cinematic genius but a wondrously nice guy as well, that is if we all have read–as I have religiously–every syllable of Kubrick’s journalistic canonization in The New York Times, Vanity Fair, Playboy and The New Yorker, though with a soupçon of skepticism there from Mr. Raphael. Then there’s the countless idolatrous interviews with Tom and Nicole about the late Saint Stanley. You might think that I should be burned at the stake for not giving Eyes Wide Shut the money review Kubrick openly schemed to obtain from the very tribe of critics he professed to ignore and despise. He has apparently succeeded with some, and failed with others. The verdict is still out with the wider public, and I wish the film well in that regard despite my strong reservations about its alleged artistry.

Indeed, my biggest quarrel is with the Kubrick champions über alles rather than with Kubrick himself. I am not now, and have never been, a hard-core Kubrickian. From fade-in to fade-out, his films have struck me as cold, sour and cheaply derisive. Yet, most are not without brilliant inventions, but these undeniably privileged moments are like the best jokes in the early primitive Woody Allen burlesques. They can be safely treasured in memory without having to sit through reels and reels of clumsy, wasteful narrative filmmaking. Now, more than ever, in Eyes Wide Shut Kubrick found himself once more trying to rise above his classic-genre colleagues with his eccentric variations, only to sink beneath them in economy of expression to achieve a maximum of emotional effect. Though his admirers assumed that Kubrick’s lifelong selectivity with projects proved that fewer meant better, the films themselves demonstrate perversely that more was less.

If a project on artificial intelligence, or AI as the first treatment was entitled, would have been Kubrick’s next project after Eyes Wide Shut, it would have been perhaps a more appropriate valedictory for his unquestioned acuity of perception, if death had not intervened. Of course, there is no such thing as a timely death, but for me, Kubrick’s most passionate and accomplished achievement is the first half of Full Metal Jacket (1987). I am booking the whole film this term for my Columbia genre class on the War Film, and I never tire of looking at it. That I cannot say the same about any of his other works may attest only to my own eccentricity on the subject of his career.

Among the women who shined by coming on to an unresponsive Mr. Cruise with verve and vivacity were Marie Richardson as Marion, a bereaved daughter of a dead male patient; Vinessa Shaw as Domino, an H.I.V.-positive prostitute with soul; and Fay Masterson as her equally willing and equally rejected roommate, Sally; Leelee Sobieski as a promiscuous nymphet offered to Bill for a price by her father, a Slavic costume shop proprietor (Rade Sherbedgia), and refused despite the girl’s flamingly lustful eyes; Julienne Davis, a crack-addicted hooker who saves Bill’s life possibly at the expense of her own; Louise Taylor and Stewart Thorndike as two models who hit upon Bill in tandem at a lavish ball, but come up empty, and so what else is new? Even Carmela Marner as a luncheonette waitress who gives Bill the eye is thrown into the mix to show how unyieldingly pure or just preoccupied our hero is.

Among the more or less depraved male characters in the cast are Todd Field’s Nick Nightingale, Bill’s ex-medical-school classmate, now reduced to playing the piano blindfolded at V.I.P. orgies, and Sky Dumont’s Sandor Szavost, a Hungarian Eurotrash would-be seducer of Alice in the opening ballroom sequence. (The ballroom sequence is the most pseudo-Ophülsian swirling sequence in the film: Kubrick jaded where Ophüls was romantic, Kubrick cold where Ophüls was warm, Kubrick derisive where Ophuls was ecstatic.) Sadly, Sydney Pollack has the most thankless role and clunkiest dialogue as Victor Ziegler, a wealthy devil ex machina who takes forever to make the plot more confused than it was before he started to explain it in the most tedious manner imaginable.

I kept my eyes wide open all through Eyes Wide Shut and saw more control-freak unreality than visual genius around the edges of the cluttered compositions.