The Linguistic Analysis of a Slogan

The jargon of business is a language that is by definition purely communicative: the “places” where it is produced are the places where science is “applied”, that is, they are the places of pure pragmatism. Among themselves, the technicians speak a language of specialists, but according to a rigid and strictly communicative function. The linguistic canon that rules within the factory also has a tendency to spread beyond the factory: it is clear that those who produce want to have an absolutely transparent relation with those who consume.

There is only one case of expressiveness—but of aberrant expressiveness—in the purely communicative language of industry: that is the case of the slogan. The slogan must indeed be expressive to impress and convince. But its expressiveness is monstrous because it is immediately transformed into a stereotype, fixed in a rigidity that is exactly the opposite of expressiveness, which is eternally changing, open to infinite interpretations.

The phony expressiveness of the slogan is thus the climax of the new technical language that is replacing human language. It is the symbol of the linguistic life of the future, that is, of an inexpressive world, without particularities and diversities of culture, perfectly homogenized and acculturated. A world that to us, the last repositories of a multiple, magmatic, religious and rational view of life, looks like a world of death.

But is it possible to foresee the advent of such a negative world? Is it possible to foretell a future world as “the end of everything”? Some people—like me—tend to do this out of desperation: the love for the world that they have experienced and lived prevents them from being able to envision any other that would be equally real; that other values could be created that are similar to those that made their existence so precious. This apocalyptic vision of the future is understandable, but probably unfair.

It seems crazy, but a recent slogan, which became an overnight sensation, that of the “Jesus jeans”—“You shall have no other jeans before me”—is presented as something new, an exception to the established rule of the slogan, revealing an unforeseen and highly expressive possibility indicative of a different development than the one that conventional practice—rapidly adopted by the desperate who want to feel the future as death—made very reasonable to predict.

Consider the reaction of Osservatore Romano to this slogan: with his old-fashioned, spiritualist and somewhat fatuous Italian, the journalist of Osservatore intoned a lamentation, one that was certainly not Biblical, posing as a poor victim or defenseless innocent. It is the same tone that characterizes, for example, that newspaper’s lamentations against immorality in literature or the cinema. In this case, however, the author’s whining and pseudo-respectable tone conceals the threatening will to resort to power: while the journalist, in effect, is pretending to be a lamb, with his lamentation in his rather old fashioned, proper Italian, the powers that be are standing behind him, ready to suppress, erase, and crush the reprobates who are the cause of his misfortune. The judges and the police are on the alert; the state apparatus immediately places itself at the service of the spirit. The jeremiad of Osservatore is followed by the legal proceedings of power: the blasphemous author or filmmaker is soon tracked down and forced to shut up.

Thus, when humanistic revolts occurred in the past—which were still possible in the context of the old capitalism and the first industrial revolution—the Church could intervene and exercise repression, brutally contradicting a certain formally democratic and liberal pretense maintained by the state power. The mechanism was simple: one part of the state power—the justice system and the police, for example—assumed a conservative and reactionary function and, as such, automatically placed its instruments of power at the service of the Church. There is therefore a double bond of bad faith in this connection between the Church and the State. On the one hand, the Church accepts the bourgeois State—instead of the monarchy or feudal order, conceding its consensus and its support, without which, until quite recently, state power never would have been able to survive. In order to accomplish this, however, the Church had to admit and approve of liberal demands and democratic formalities: which it admitted and approved only under the condition that it would obtain the power of the tacit authorization to limit them and suppress them. And this authorization was willingly conceded by bourgeois power. In fact, its pact with the Church as an instrumentum regni consisted in nothing but this: to disguise its own essential anti-liberalism and its own anti-democratic nature by entrusting the anti-liberal and anti-democratic function to the Church, recognized in bad faith as a higher religious institution. In short, the Church made a pact with the devil, that is, with the bourgeois State. In fact, there is no more scandalous contradiction than the one that exists between religion and the bourgeoisie, for the latter is opposed to religion. The monarchical or feudal power was actually much less opposed to religion. Fascism, for its part, as a regressive movement of capitalism, was therefore objectively less diabolical, from the Church’s point of view, than the democratic regime: fascism was blasphemous, but it did not undermine the Church from within, because it was a new, false ideology. The Concordat was not sacrilegious in the 1930s, but it is today; for fascism did not even touch the Church, while Neo-Capitalism is destroying it today. The acceptance of fascism was an atrocious episode: but the acceptance of bourgeois capitalist culture is a definitive fact whose cynicism is not only a blemish, one more in an endless series of such blemishes, but a historical error that the Church will probably pay for with its decline.

The Church had no idea—in its blind zeal for stability and to ensure the eternal existence of its institutional function—that the Bourgeoisie represented a new spirit that is certainly not that of fascism: a new spirit that was at at first capable of competing with the religious spirit (stopping short of clericalism), and then ended up supplanting it in providing men with a total and integral view of life (and therefore no longer had any need for clericalism as an instrument of power).

It’s true: as I said, the pathetic lamentations of the journalist for Osservatore are still immediately followed—in the cases of “classical” opposition—by the action of the legal system and the police. But this is a matter of life and death. The Vatican still finds old believers in the apparatus of state power: but they are just that—old. The future belongs neither to the old cardinals, nor to the old politicians, nor to the old judges, nor to the old policemen. The future belongs to the young bourgeoisie who no longer need to exercise power with the classic instruments of the past; who no longer have any use for the Church, which has now ended up belonging generically to that humanistic world of the past that constitutes an impediment to the new industrial revolution. For the new bourgeois power needs a totally pragmatic and hedonistic spirit in the consumers: a technical and purely worldly universe is the kind of universe in which the cycle of production and consumption can develop in accordance with its own nature. There is no longer any place for religion, and least of all for the Church. The repressive struggle that the new capitalism is still fighting by means of the Church is a rearguard struggle, destined, in bourgeois logic, to be won in the very near future, naturally resulting in the dissolution of the Church.

It seems crazy, I repeat, but the case of the “Jesus jeans” is a herald of this development. Those who produce these jeans and market them, using one of the Ten Commandments as an advertising slogan, show us that—probably with a certain lack of a feeling of guilt, that is, with the thoughtlessness of those who no longer think about certain problems— they are beyond the threshold within which our way of life and our mental horizon exists.

In the cynicism of this slogan there is an intensity and an innocence of an absolutely new type, although perhaps one that has matured over the course of the last few decades (but during a very short period in Italy). It says precisely, with the laconic mode of expression suited to a phenomenon that is immediately, completely and definitively accessible to our consciousness, that the new industrialists and the new technicians are totally secular, but secular in a way that can no longer be measured against the yardstick of religion. This secular quality is a “new value” born in bourgeois entropy, in which religion is perishing as an authority and as a form of power, and survives only to the extent that it is still a natural product for mass consumption and a profitable form of marketable folklore.

But the interest of this slogan is not only negative, not only does it represent the new way by which the Church is brutally reduced to what it really represents today: there is also a positive interest in it, that is, the unforeseen possibility of conferring an ideological quality and therefore an expressiveness on the language of the slogan and therefore, presumably, also on the language of the technological world as a whole. The blasphemous spirit of this slogan is not limited to a plain and simple conditional declaration [apodosis], a pure observation that fixes its expressiveness in pure communicability. It is more than just an unscrupulous stunt (whose Anglo-Saxon model is “Jesus Christ Superstar”): to the contrary, it lends itself to an interpretation that can only be infinite: it therefore preserves in the slogan the ideological and esthetic characteristics of expressiveness. It says—perhaps—that the future that, for us—religious and humanists—seems like stasis and death, will also be, in a way new, history; that the demand for the pure communicativeness of production can somehow be contradicted. In fact, the slogan of these jeans is not limited to communicating the need to consume, but even takes the form of a nemesis—although unintentionally—that punishes the Church for its pact with the devil. On this occasion, the journalist for Osservatore really is helpless and impotent: even if the legal system and the police are immediately set in motion on behalf of Christian values, and they succeed in tearing down from the walls of the nation all the posters and billboards displaying this manifesto and this slogan, it has now become an irreversible, even if long-awaited, reality: its spirit is the new spirit of the second industrial revolution and of its consequent transformations of values. 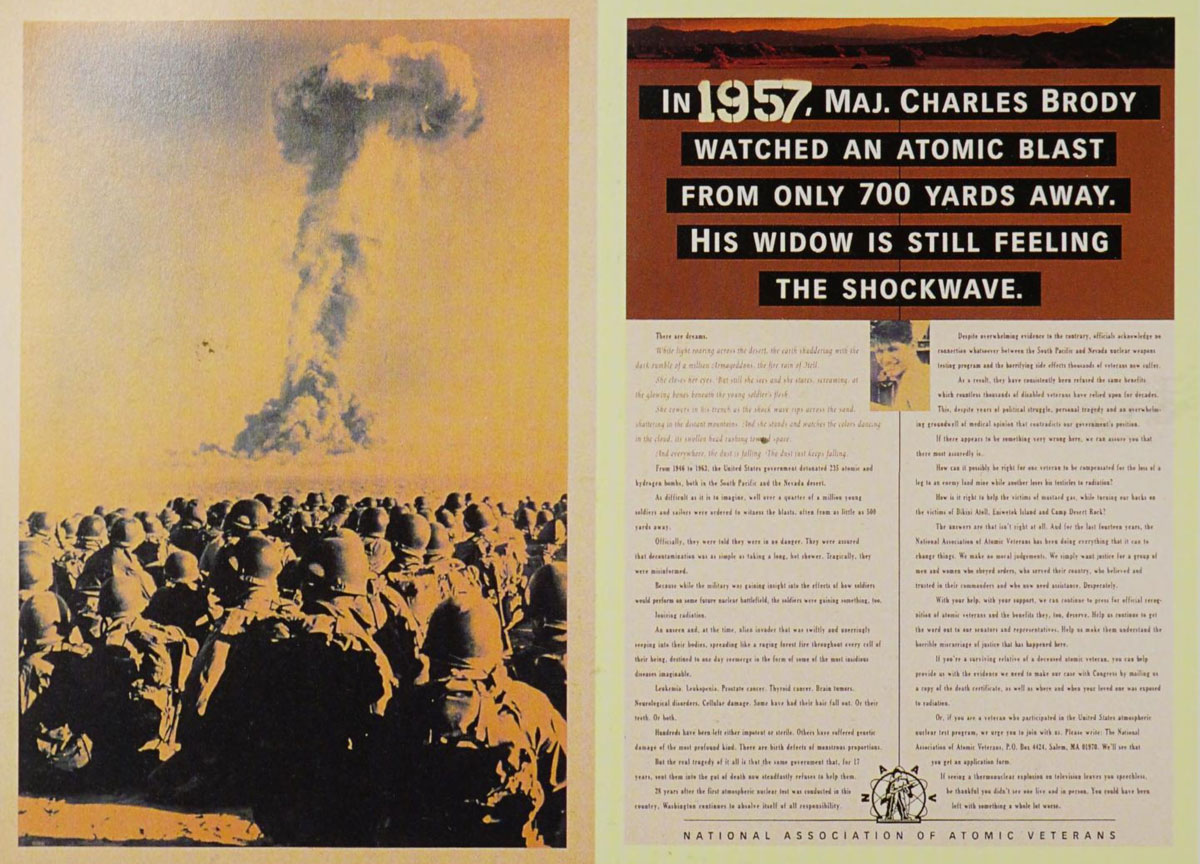 In 1957, Maj. Charles Brody watched an atomic blast from only 700 yards away…

The campaign, from the early 1990s, gave voice to a group of victims who had remained silent for decades.

A Quarter of a Million People Pack it in Every Year

Symbolism is poetic shorthand that represents reality in digestible form. But even when packaged with an ambiguous three-way pun, it won’t kill smoking. Try Ashes To Ashes. 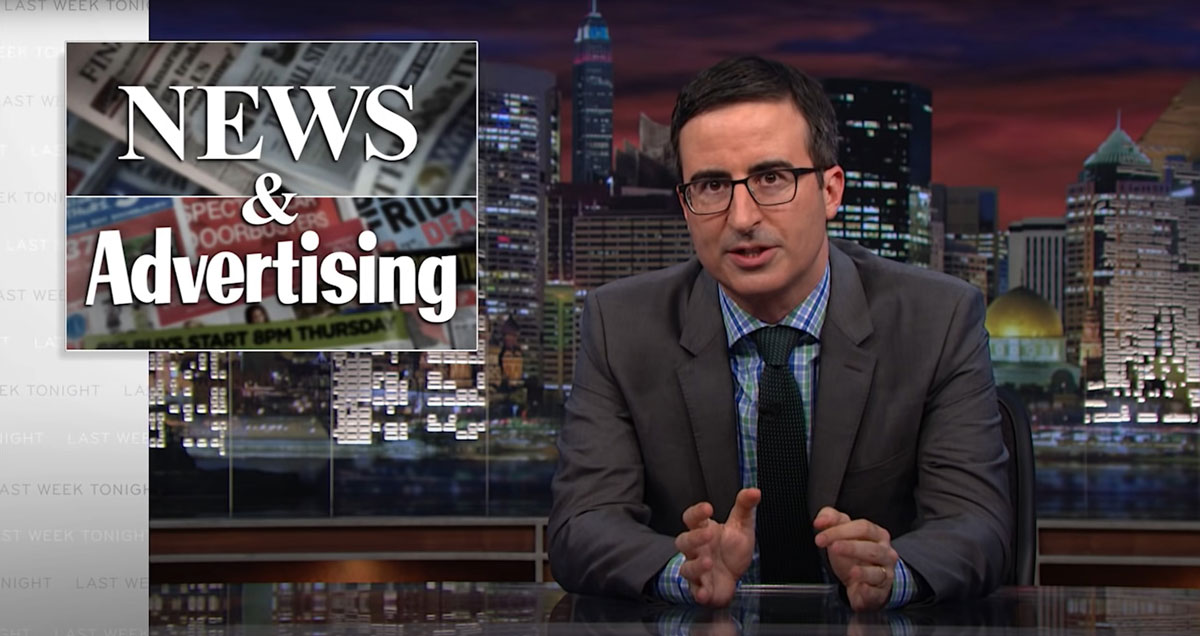 The line between editorial content and advertising in news media is blurrier and blurrier. That’s not bullshit. It’s repurposed bovine waste.