"She was in essence the denial of death. My own life was rooted to her in a deep spiritual sense, and had been during the whole of my growing up." 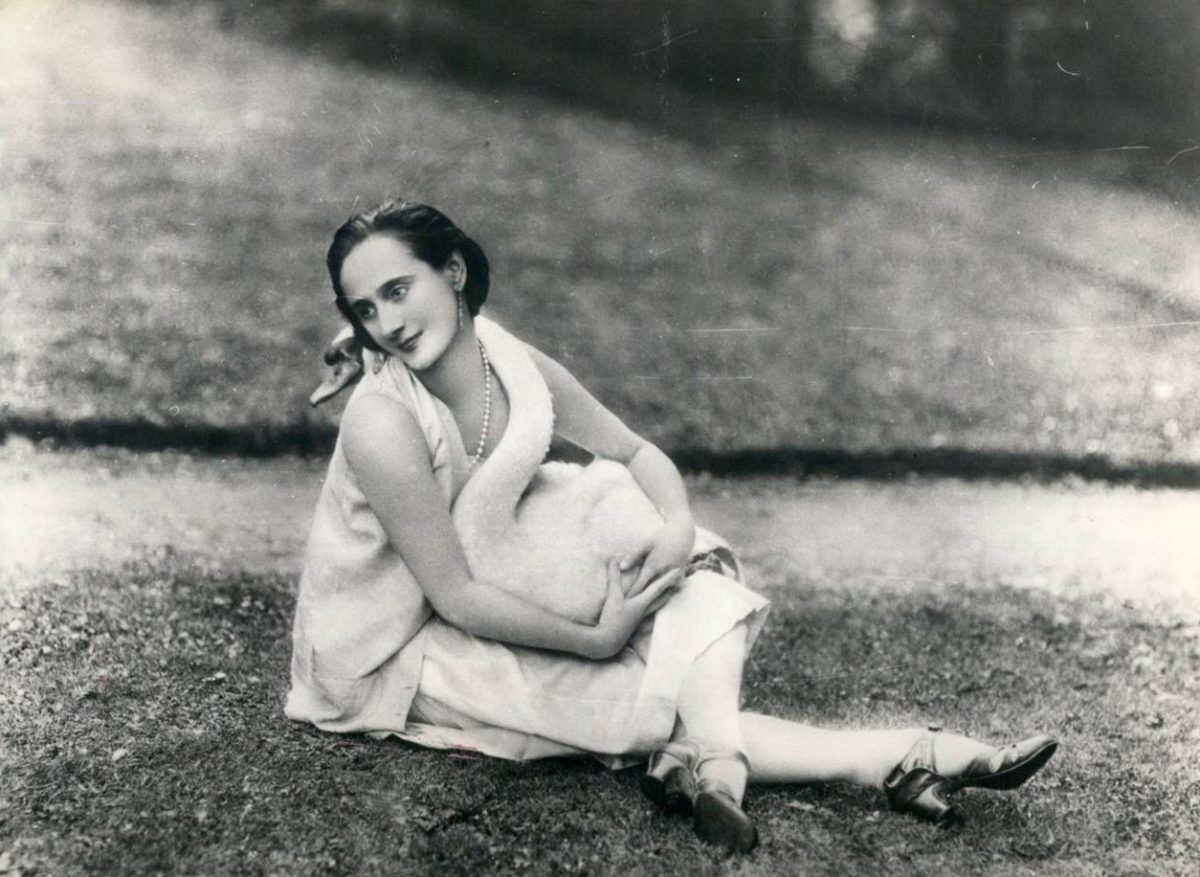 Anna Pavlova! My life stops as I write that name. Across the daily preoccupation of lessons, lunch boxes, tooth brushings, and quarrelings with Margaret1 flashed this bright, unworldly experience and burned in a single afternoon a path over which I could never retrace my steps. I had witnessed the power of beauty, and in some chamber of my heart I lost forever my irresponsibility. I was as clearly marked as though she had looked me in the face and called my name. For generations my father’s family had loved and served the theater. All my life I had seen actors and actresses and had heard theater jargon at the dinner table and business talk of box-office grosses. I had thrilled at Father’s projects and watched fascinated his picturesque occupations. I took a proprietary pride in the profitable and hasty growth of “The Industry.” But nothing in his world or my uncle’s prepared me for theater as I saw it that Saturday afternoon.2

Since that day I have gained some knowledge in my trade and I recognize that her technique was limited; that her arabesques were not as pure or classically correct as Markova’s, that her jumps and batterie3 were paltry, her turns not to be compared in strength and number with the strenuous durability of Baronova or Toumanova.4 I know that her scenery was designed by second-rate artists, her music was on a level with restaurant orchestrations, her company definitely inferior to all the standards we insist on today, and her choreography mostly hack. And yet I say she was in her person the quintessence of theatrical excitement.

As her little bird body revealed itself on the scene, either immobile In trembling mystery or tense in the incredible arc which was her lift, her instep stretched ahead in an arch never before seen, the tiny bones of her hands in ceaseless vibration, her face radiant, diamonds glittering under her dark hair, her little waist encased in silk, the great tutu balancing, quickening and flashing over her beating, flashing, quivering legs, every man and woman sat forward, every pulse quickened. She never appeared to rest static, some part of her trembled, vibrated, beat like a heart. Before our dazzled eyes, she flashed with the sudden sweetness of a hummingbird in action too quick for understanding by our gross utilitarian standards, in action sensed rather than seen. The movie cameras of her day could not record her allegro. Her feet and hands photographed as a blur.

Bright little bird bones, delicate bird sinews! She was all fire and steel wire. There was not an ounce of spare flesh on her skeleton, and the life force used her body until she died of the fever of moving, gasping for breath, much too young.

She was small, about five feet. She wore a size one and a half slipper, but her feet and hands were large in proportion to her height. Her hand could cover her whole face. Her trunk was small and stripped of all anatomy but the ciphers of adolescence, her arms and legs relatively long, the neck extraordinarily long and mobile. All her gestures were liquid and possessed of an inner rhythm that flowed to inevitable completion with the finality of architecture or music. Her arms seemed to lift not from the elbow or the arm socket, but from the base of the spine. Her legs seemed to function from the waist. When she bent her head her whole spine moved and the motion was completed the length of the arm through the elongation of her slender hand and the quivering reaching fingers. Without in any way being sensual—being, in fact, almost sexless—she suggested all exhilaration, gaiety, and delight. She jumped, and we broke bonds with reality. We flew. We hung over the earth, spread in the air as we do in dreams, our hands turning in the air as in water—the strong forthright taut plunging leg balanced on the poised arc of the foot, the other leg stretched to the horizon like the wing of a bird. We lay balancing, quivering, turning, and all things were possible, even to us, the ordinary people.

I have seen two dancers as great or greater since, Alicia Markova and Margot Fonteyn, and many other women who have kicked higher, balanced longer, or turned faster. These are poor substitutes for passion. In spite of her flimsy dances, the bald and blatant virtuosity, there was an intoxicated rapture, a focus of energy, Dionysian in its physical intensity, that I have never seen equaled by a performer in any theater of the world. Also she was the first of the truly great in our experience.

I sat with the blood beating in my throat. As I walked into the bright glare of the afternoon, my head ached and I could scarcely swallow. I didn’t wish to cry. I certainly couldn’t speak. I sat in a daze in the car, oblivious to the grownups’ ceaseless prattle. At home I climbed the stairs slowly to my bedroom and, shutting myself in, placed both hands on the brass rail at the foot of my bed; then, rising laboriously to the tips of my white buttoned shoes, I stumped the width of the bed and back again. My toes throbbed with pain, my knees shook, my legs quivered with weakness. I repeated the exercise. The blessed, relieving tears stuck at last on my lashes. Only by hurting my feet could I ease the pain in my throat.

It is a source of sadness to me that few of our contemporary ballet dancers ever saw Anna Pavlova. At the time of which I write, her name was synonymous with the art—Pavlova, the Incomparable, was an internationally known slogan. She was as famous as Caruso and her position as unique. No one today approaches her power over the popular imagination. She half-hypnotized audiences, partaking almost of the nature of a divinity.

My life was wholly altered by her—so I wonder, casting about in vain for similar dazzling influences, what first drove Kaye, Alonso, Fonteyn, Toumanova, and Helpmann to the barre.5

She danced The Dying Swan. Everyone has danced The Swan. What was it? A series of pas de bourrées6 around and around the stage with flutterings and undulations of the arms interspersed with broken staggers until the final collapse and folding away. Nothing else. Fokine composed it in half an hour for a charity performance, and it is probably the most famous solo in the history of dancing. When she trembled onto the stage it was a death agony, the voice in the dark, the final anonymous cry against annihilation. And when she lay doubled up and the last shudder passed through feathers and broken bones, drawing as an afterbeat when all was finished the shivering inert hand across her face in a gesture of final decency, everyone sat stricken. Death was upon each of us.

Death came to Anna Pavlova in 1931, when she was fifty. She had not stopped touring for a single season. Her knees had sustained some damage, but she would not rest, and she was in a state of exhaustion when the train that was carrying her to Holland was wrecked. She ran out into the snow in her nightgown and insisted on helping the wounded. When she reached The Hague she had double pneumonia. Her last words were: “Get the Swan dress ready.”

Standing on Ninth Avenue under the El, I saw the headlines on the front page of the New York Times. It did not seem possible. She was in essence the denial of death. My own life was rooted to her in a deep spiritual sense, and had been during the whole of my growing up. It mattered not that I had only spoken to her once and that my work lay in a different direction. She was the vision and the impulse and the goal.

Pavlova’s ashes were laid in the Golder’s Green cemetery near her home, Ivy House, Hampstead Heath. All the glory of the last great Imperial days stood by. Karsavina was there. Lopokova, Massine.7

But also in New York, in Los Angeles, in Paris, Berlin, Rome, San Francisco, wherever there was a Russian Orthodox Church, the dancers gathered, those that knew her and many more that didn’t. I went in New York and all the dancers of the city were there. My mother came. She said she wished to, that she owed her a debt of many hours of joy. We stood. The Russians held lighted candles; the choir chanted with a high tonal insistency that wore down like rain on rock. The priest passed in and out of his painted, holy screens. A friend leaned to me. “They are singing,” she whispered. “Receive the soul of Anna. Cherish our Anna. Bless and protect Anna.” But I put my handkerchief to my mouth and heard the drums and the beating of feet and the cries she gave as she leaped. At the conclusion of the service Fokine, as senior friend, colleague, and Russian, received our condolences. He knew very few of us. We walked up silently, strangers, and shook his hand. His wife, Vera Fokina, in black from head to foot with sweeping veils, stood beside him.

We went out into the day. Wherever Pavlova had passed, hearts changed, flames sprang in the grass, and girls ran out to a strange, wild, ancient dedication.

1 Miss de Mille’s sister.
2 Miss de Mille’s father, William C. de Mille, began his career as a playwright but switched to directing motion pictures with his brother, Cecil B.
3 A type of dance movement in which the dancer beats his feet together or beats one against the other.
4 Famous ballerinas.
6 A horizontal bar used in ballet exercises.
6 A group of three or more steps danced in a staccato.
7 Famous ballet dancers.

Agnes de Mille (1905-1993), daughter of William de Mille, film producer, and niece of Cecil B. de Mille, the director, is also prominent in the entertainment world, as a choreographer and dancer. Miss de Mille took thorough training in classical ballet, but she has devoted herself to solo character sketches of a comic cast and to ballets on American themes. Her most successful uses of Americana were Rodeo, or The Courting at Burnt Ranch (1942), a cowboy ballet depicting a cowgirl’s struggle to win the love of a champion roper; and the choreography for the musical comedy Oklahoma (1943). She has been highly praised for popularizing the ballet without sacrificing its artistic values. The selection published here from her autobiography Dance to the Piper is given in the form in which it appeared in The Atlantic Monthly of October, 1951.