George Carlin: Seven Words You Can Never Say on Television 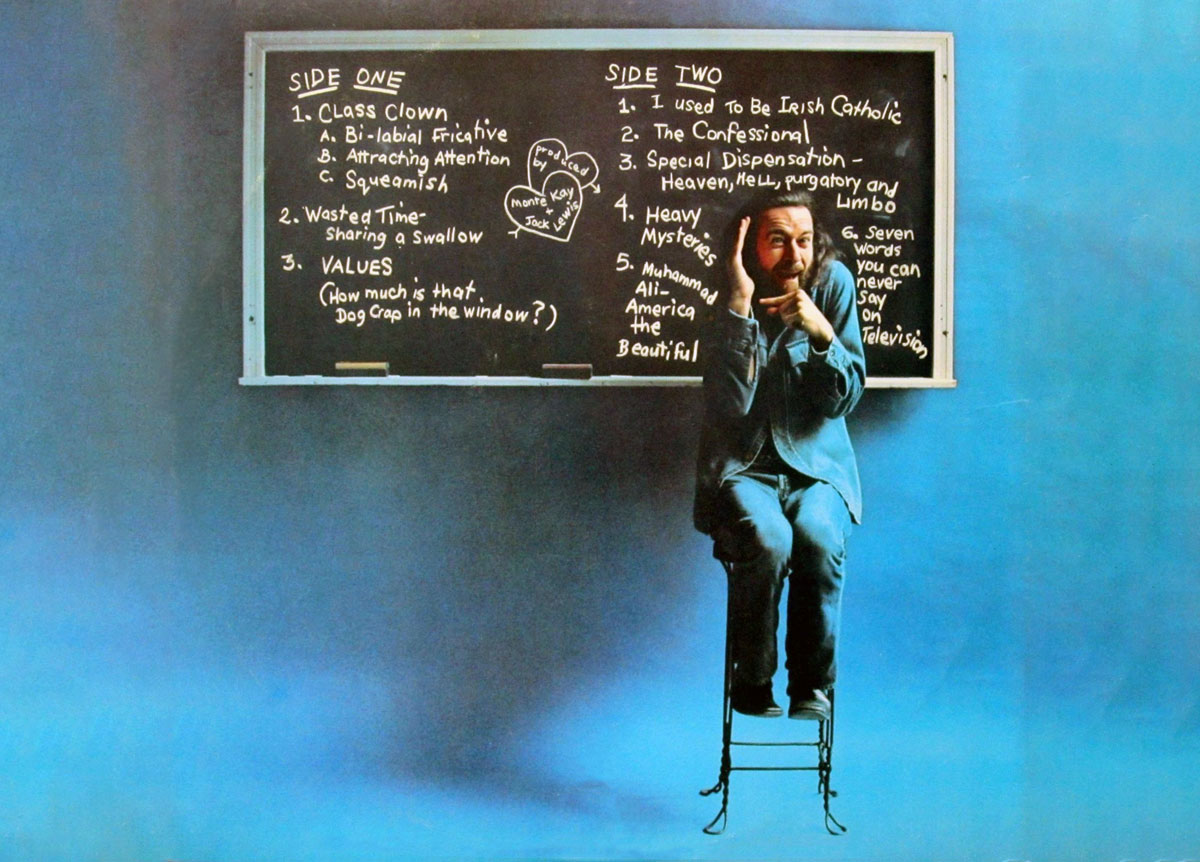 At the time Carlin was relatively well known for tame satirical routines about the entertainment industry. His previous album FM & AM released the same year, showed that he was already drifting towards counter-culture icon, but Class Clown was a landmark. Besides musings about his youth, the album featured strongly directed remarks against the Vietnam War and his attachment to taboo topics. The album contains “Seven Words You Can Never Say on Television”, which became the focus of government harassment in the year that followed, and perhaps Carlin’s most famous calling card. Carlin continued to explore the use of profanity for the rest of his career. While this skit prevents the album from being Carlin’s only profanity-free one since 1971, it also marks the first time Carlin has used the word “fuck” in any of his recordings.

“Seven Words You Can Never Say on Television”

I love words. I thank you for hearing my words.

I want to tell you something about words that I think is important.

Words are all we have, really. We have thoughts but thoughts are fluid, y’know like, woo woo woo woo, POP! Then we assign a word to a thought and we’re stuck with that word for that thought, so be careful with words.

I like to think that yeah, the same words that hurt can heal, it’s a matter of how you pick them.

There are some people that aren’t into all the words.

There are some that would have you not use certain words.

Yeah, there are 400,000 words in the English language and there are 7 of them that you can’t say on television. What a ratio that is!

399,993 to 7. They must really be bad. They’d have to be outrageous to be separated from a group that large.

All of you over here, you 7, baaad words!

That’s what they told us they were, remember? “That’s a bad word!” No bad words, bad thoughts, bad intentions, and words!

You know the 7, don’t you, that you can’t say on television?
“Shit, piss, fuck, cunt, cocksucker, motherfucker, and tits.”

Those are the heavy seven. Those are the ones that’ll infect your soul, curve your spine, and keep the country from winning the war.

And “tits” doesn’t even belong on the list, y’know? Man!

That’s such a friendly sounding word.

It sounds like a snack, doesn’t it? Yes, I know, it is a snack. But I don’t mean your sexist snack! I mean New Nabisco Tits!, and new Cheese Tits, Corn Tits, Pizza Tits, Sesame Tits, Onion Tits, Tater Tits. “Betcha Can’t Eat Just One!”

That’s true. I usually switch off.

I’m not completely insensitive to people’s feelings. I can understand why some of those words got on the list, like cocksucker and motherfucker. Those are heavyweight words. There’s a lot going on there. Besides the literal translation and the emotional feeling. I mean, they’re just busy words. There’s a lot of syllables to contend with.

It’s like an assault on you. So I can dig that. We mentioned shit earlier, and 2 of the other 4-letter Anglo-Saxon words are piss and cunt, which go together of course. A little accidental humor there. The reason that piss and cunt are on the list is because a long time ago, there were certain ladies that said “Those are the two I am not going to say. I don’t mind fuck and shit but ‘P’ and ‘C’ are out.” Which led to such stupid sentences as “Okay you fuckers, I’m going to tinkle now.”

And, of course, the word fuck. I don’t really, well that’s more accidental humor, I don’t wanna get into that now because I think it takes too long. But I do mean that. I think the word fuck is a very important word. It’s the beginning of life, yet it is a word we use to hurt one another quite often. People much wiser than I am have said, “I’d rather have my son watch a film with two people making love than two people trying to kill one another.” I, of course, can agree. It is a great sentence. I wish I knew who said it first. I agree with that but I like to take it a step further. I’d like to substitute the word Fuck for the word Kill in all of those movie cliches we grew up with.

So maybe next year I’ll have a whole fuckin’ ramp on the N word.
I hope so. Those are the 7 you can never say on television, under any circumstances. You just cannot say them ever ever ever. Not even clinically. You cannot weave them in on the panel with Doc, and Ed, and Johnny. I mean, it is just impossible. Forget those 7. They’re out.

But there are some 2-way words, those double-meaning words. Remember the ones you giggled at in sixth grade? “…And the cock crowed three times.” “Hey, the cock crowed 3 times. Ha ha ha ha. Hey, it’s in the Bible. Ha ha ha ha.” There are some 2-way words, like it’s okay for Curt Gowdy to say “Roberto Clemente has 2 balls on him,” but he can’t say, “I think he hurt his balls on that play, Tony. Don’t you? He’s holding them. He must’ve hurt them, by God.” And the other 2-way word that goes with that one is prick. It’s okay if it happens to your finger. You can prick your finger but don’t finger your prick. No, no.