An outstanding lineup of entertainers gathered in the Kennedy Center Concert Hall to salute Dave Chappelle, recipient of the 22nd annual Mark Twain Prize for American Humor on October 27, 2019. 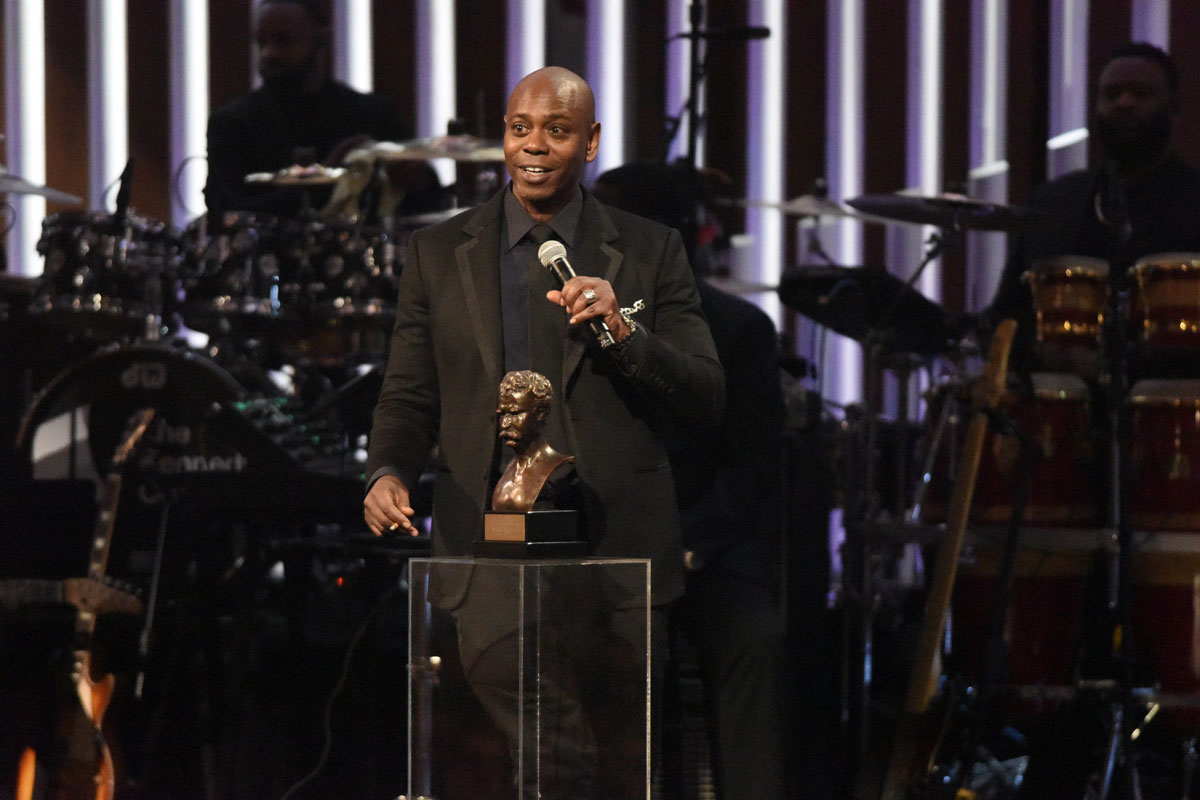 An outstanding lineup of entertainers gathered in the Kennedy Center Concert Hall to salute Dave Chappelle, recipient of the 22nd annual Mark Twain Prize for American Humor on October 27, 2019.

Thank you, thank you! I like not knowing what’s gonna happen. I like making memories. sometimes I do all this crazy shit around my colleagues just so that they can tell their friends I did it. Rather than talk about myself, just briefly I want to just talk about my genre, stand-up comedy is an incredibly American genre. I don’t think any other country could produce this many comedians, and unbeknownst to many people in this audience, I don’t think there’s opinion that exists in this country that is not represented in a comedy club by somebody. Each and every one of you has a champion in the room. We watch you guys fight but when we’re together we talk it out! I know comics that are very racist, and I watch them on stage and everyone’s laughing and I’m like, mmm that motherfucker means that shit. Don’t get mad at them, don’t hate them. We go upstairs and have a beer, sometimes I even appreciate the artistry that they paint their racist opinions with. Man, it’s not that serious. The First Amendment is first for a reason, the Second Amendment is just in case the first one doesn’t work out.

We gotta let some air out of the ball, man, the country is getting a little tight it doesn’t feel like it’s ever felt in my lifetime, so tonight I am honored that my colleagues are here in comedy and in music. And I want everyone in America right now to look at me, look at me smoking indoors. I didn’t ask anybody I just did it what they’re gonna do, kick me out before I get the prize no, this is called leverage.

The thing I like best about tonight was that I saw so many people from different parts of my life, like friends that I grew up with here in DC, friends of mine from Ohio then and now, friends of mine from comedy clubs, all the fucking musicians that blew my mind you guys have no idea how you inspired me. I want to give a special shout-out to my OG Tony Woods. Miles Davis has a quote it’s one of my favorite– Miles Davis said so much cool shit but one of the things he said I always loved, he said it took me years to learn how to play like myself, you know he would watch other musicians then he would try to play like Dizzy or Bird, all the guys who were great. Tony Woods was my Dizzy and Bird, if I was Miles, I was trying to play like you, you were the first person I ever saw do it absolutely right, who feel us, and he told the truth. There’s something so true about this genre when done correctly that I will fight anybody that gets in a true practitioner of this art form’s way, because I know you’re wrong. This is the truth and you are obstructing it. I’m not talking about the content, I’m talking about the art form. Do you understand? Do we have an agreement?

And what I really wanted to say tonight and I’m glad I get the platform to do it– I’m gay! I am gay and I can’t wait to see what this does for my career being gay like this.

So many special shout outs, one of the main architects of the come back of the century, my brother and my mentor the mighty Stan Lathan. I’d never dreamed that I would be able to work with someone as great as you. These last five specials– straight fire. I wouldn’t want to do another special with anybody else but you. So eat your motherfucker vegetables and live as long as you can cuz we’re doing a few more of these Neal Brennan your speech made me cry because it reminded me of all those hard days of work and all that money I never got for it.

The other real special shout-out I got to make because none of this would have been possible in any level without this person is my mother. Mom, my mother. Mom, mom, mom, mom. You have no idea when I put this woman through If you had just given birth to me, that would have been more than enough, but the fact that she raised me and raised me well. We had a real oral tradition in our house. I knew the word “griot” when I was a little boy. A griot was a person in Africa who was charged with keeping the stories of the village. Everyone would tell a griot of the stories and they would remember them all so that they could tell future generations. When they got old, they’d tell them to someone else and they say in Africa, when a griot dies it’s like a library was burned down, and my mother used to tell me before I ever thought about doing comedy, she said, “You should be a griot,” and she filled me with every story of black life, you know she’s educated in African American Studies and she would let me understand the context that I was being raised in. I’m being raised in a hostile environment that I have to tame. By the time I was 14 years old, I was in nightclubs mastering an adult world. I was terrified. The crack epidemic was going on and my mother would hear gunshots outside and be scared to death, “Maybe it’s my son,” but early in my career, if you remember, mom, you used to sit in the club with me. She’d do a full day of work, you’d be back there, falling asleep just waiting for me to go on she would watch my show every night. Do you know how long that car ride is home? How many of you have ever heard your mother say, “***** jokes were a little too much tonight son,”? I was a soft kid, I was sensitive I cry easy and I would be scared to fistfight and my mother used to tell me this thing, I don’t even know if you remember but you said this to me more than once you said, “Son, sometimes you have to be a lion so you can be the lamb you really are.” I talked this shit like a lion. I’m not afraid of any of you when it comes word to word, I will gab with the best of them just so I can chill and be me. And that’s why I love my art form, because I understand every practitioner of it whether I agree with them or not, I know where they’re coming from they want to be heard, they got something to say, there’s something they noticed, they just want to be understood. I love this genre. It saved my life, so tonight, mom, I would like to honor you in a very special way that I cannot do on my own but because now I am a man with great and influential friends, I’d like to ask my man Thundercat to come out on stage, Thundercat, the mighty Mos Def. Washington, DC thank you very much for giving me a home and a place to start. Today is officially Dave Chappelle Day in Washington, DC, the mayor declared it last night. So, in the future, on Dave Chappelle Day, I ask everyone who wishes to celebrate it to make one incredible memory for themselves, and/or somebody else.

Thank you very much, goodnight.