With Chinatown, as with Rosemary's Baby, Roman Polanski handles the mechanics of the plot with a ruthless brilliance that is immediately involving. 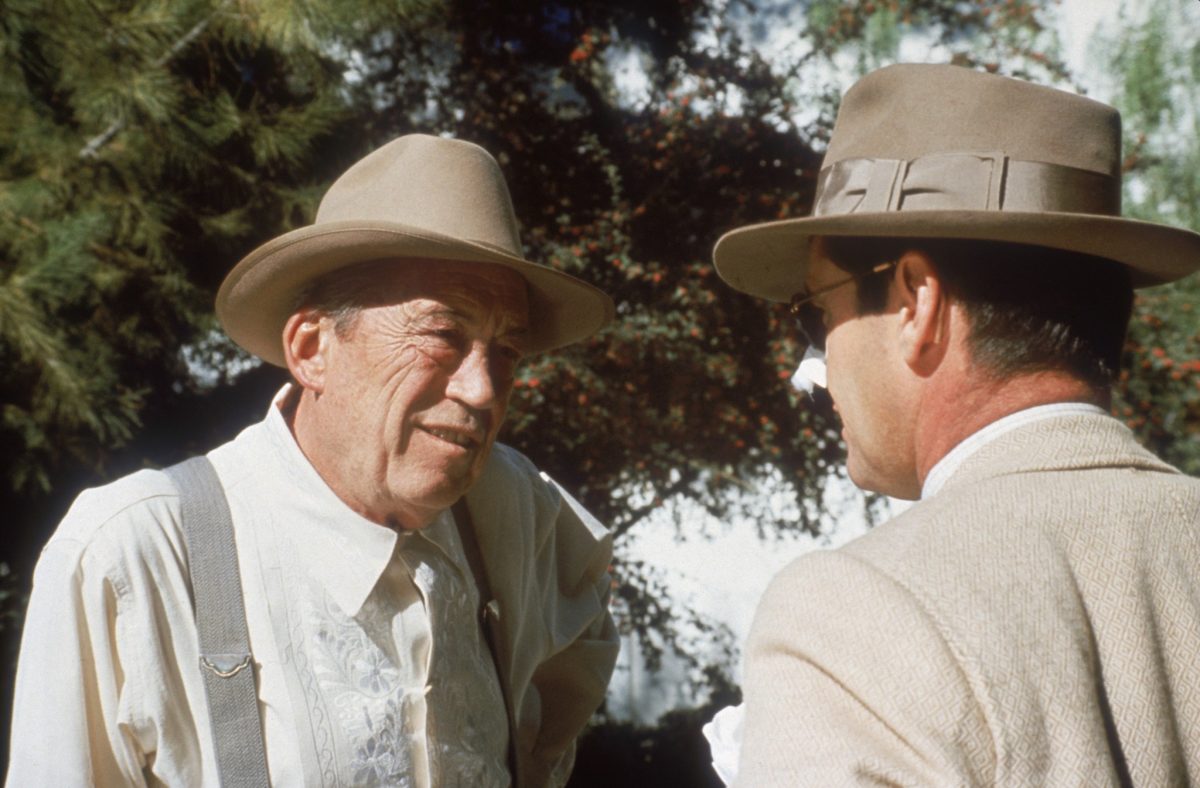 There is a moment in Chinatown (CIC) when one wonders if one has seen aright, or simply been caught up in the spell cast by the scattered, elusive memories of time past: a single shot in the sequence where private eye Jake Gittes gets his dangerous charmer to bed for the first and only time, and the soft bedroom light moment­arily transforms her chalky 1930s make-up and blood-red lips into the inscrutable mask of a Chinese dancer. Sleek, seductive, and likely to turn up in all the wrong places to thicken the plot with an appallingly plausible explanation, she is of course the enigmatic enchantress without whom no Chandleresque plot would be complete; but at this point she is something more, and the traditional lure of the East begins to pervade the film with its twin auras of romance and corruption.

At the very beginning, though, we might almost be back in Bogart land. Sitting com­fortably in his office, Jake Gittes (Jack Nichol­son) watches as a client flips agitatedly through a series of photographs of his wife taken in flagrante. ‘All right, Curly,’ says Jake as the distressed client clutches for support, ‘you can’t eat the Venetian blinds, I just had ’em installed Wednesday.’ ‘She was just no good,’ moans Curly. ‘You’re right,’ Jake agrees cheerfully. As a classic example of the wise­cracking private eye, Jake Gittes rightly follows a classic pattern from the moment he is hired by a wife to find out what her errant husband is up to. The wife turns out to be no wife but an impostor hired for purposes unknown; the husband is duly murdered; and the real wife (Faye Dunaway), turning up initially with icy disapproval but melting gradually into clinging dependence, leads him into a nightmare web of intrigue ranging from civic corruption to incest by way of some bizarre but equally classic encounters in a morgue, an old people’s home, a nocturnal wasteland inhabited by a smiler with a knife (Polanski himself), a house behind whose windows the secret is momentarily glimpsed.

Hollywood is clearly good for Polanski, not necessarily in that he makes better films there, but because its disciplines make him give audiences (and indeed critics) something neat, firm and familiar to hold on to instead of leaving them to—hopefully—pluck the meaning of a film like What? out of its airy, apparently intangible insouciance. With Chinatown, as with Rosemary’s Baby, he handles the mechanics of the plot with a ruthless brilliance that is immediately involving.

From the moment he pulls the voyeur trick of showing us a puzzled Gittes watching his prey through field-glasses as he stares enig­matically out to sea, one is hooked, watching intrigued as Jake slips a watch under the wheels of a car, tremulously preceding him as he enters an apartment where a cabbage on the kitchen floor loudly proclaims that all is not well. Twice, reverse angle shots from hunted back to hunter as Gittes trails his quarry make one shrink back with him in fear of discovery. An angled long shot down into a parched river bed, where a man brooding over a handful of pebbles exchanges some tantalisingly unheard words with a boy ambling by on a horse, lends a touch of surrealist mystery to a scene later revealed to be quite mundane. Above all, a beautifully judged line of dialogue invariably picks up the threads of the plot seconds before one gets there oneself, to send one scampering down new avenues of speculation. ‘The guy’s got water oil the brain,’ mutters a colleague as Gittes describes where he has been while tailing the supposedly errant husband; and immediately the hint sends one washing along on a flood of speculation, as the references to water really begin to multiply and its role in the plot gradually emerges.

Paradoxically, however—and it is done with cool, Hitchcockian cunning—as the mystery clarifies, the sense of disorientation begins. This starts at a fairly innocuous thriller-convention level, with noises off never quite what they seem —sinister scratching outside a door proves to be workmen scraping off the name of a deceased partner, the roar of an express train turns out to be water gushing down a conduit pipe—but gradually escalates in inverse ratio to Gittes’ conviction that he is at last reaching solid ground. The key factor in this disorientation is the setting, Los Angeles in 1937, with the fam­iliar city of today reduced to its former more modest dimensions by being surrounded with a suburbia of rocks and arid desert. Presented with hallucinatingly accurate period detail (never for a moment overplayed for fashionable nostalgia), it yet remains curiously elusive: a city caught at a vital moment of change when the ‘desert community’, as one of the characters describes it, is about to step out of the past into the future. Here, in this American city which seems to become more alien the further one penetrates into it—Mexican policemen, Japan­ese gardeners, Chinese servants, and finally the mysterious Chinatown itself—the appropriately named arch-villain Noah Cross (John Huston) prepares to steer his ark of respectability— which he founded on the good works of his son-in-law (the past) and launched by recourse to civic corruption and the murder of that same son-in-law (the present)—towards the haven that will crown his wealth with immortality: the future.

Poor Jake Gittes, meanwhile, remains locked in the past, and for all the ingenuity and accuracy of his sleuthing, is no match at all for his adversary. ‘Want to know what happens to inquisitive guys?’ says the evil little gnome with the knife as he delicately slits open Jake’s nostril. ‘They lose their noses.’ Somewhere along the road Jake loses his sense of direction, caught in a romantic fantasy of his own making which locks him into the past and leaves him helpless against the man of the future. There is a sense here, almost, of a time loop as he lies in bed after making love and reluctantly confides his memory—or premonition ?—of the woman he once tried to help during his days on the Chinatown police force but instead destroyed. ‘Forget it, Jake, it’s Chinatown,’ says a friend as he stares brokenly at the ghostly white car in the dark street where the woman he loves has just died a horrible death; and as Noah Cross, the man indirectly and directly responsible, fades discreetly away, presumably to become a respected citizen again.

‘It’s Chinatown’: a warning not to stir up forces that cannot be controlled, that are better left to stir agreeably in the no-man’s-land between unconsciousness and memory. Sam Spade was once lured into a love as hopeless by the faithless Brigid O’Shaughnessy in The Maltese Falcon, but where Jake Gittes falls headlong into the trap he digs for himself, Spade was enough of a realist to retain, while always hoping, one eye open against the possibility of betrayal. Cynics, as someone commented of Hemingway, lean so far back­wards to avoid sentiment that they inevitably overbalance; and once their defences are down, there is no limit to the romantic imagination.

It is in this subterranean passage of China­town that Polanski rejoins his more overtly personal self of What?, wryly commenting on the sad fact that art and life so seldom coincide. ‘Yes, yes, I remember, I remember now. What splendour!’ cries the old art collector in What?, sinking back in ecstasy on his deathbed as the innocent intruder vouchsafes him a glimpse of the perfection of her breasts. For him, reality at last merges with imagination, past with present, and he dies, happy to have added one authentic treasure to his collection. But for Gittes, fashion­ing his great love from some ideal in his past, and then watching his imperfect creation crumble to nothingness in the light of reality, there is no such reconciliation. .. and will perhaps never be until he is as old and wise as the patriarch of What ? or Noah Cross himself.