The Mandalorian – S02E06 – The Tragedy [Transcript]

The Mandalorian arrives with Grogu on Tython, and finds the ancient temple on top of a mountain. He seats Grogu at the center so that he may choose his path. 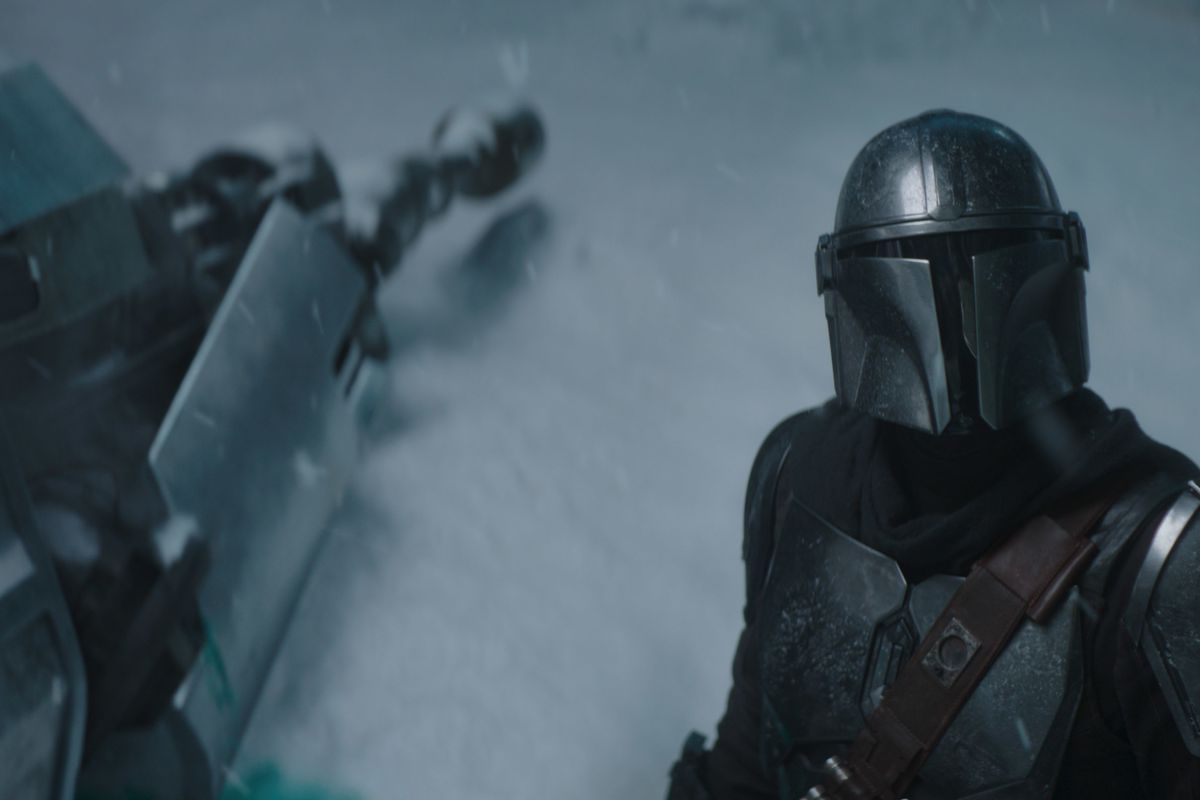 The Mandalorian arrives with Grogu on Tython, and finds the ancient temple on top of a mountain. He seats Grogu at the center so that he may choose his path. Grogu meditates, and a protective Force field appears around him. Boba Fett arrives with the mercenary Fennec Shand, whose life he saved on Tatooine, and demands the return of his Mandalorian armor.[a] Following a tense confrontation, the Mandalorian agrees to trade the armor for the safety of Grogu. Two Imperial troop carriers arrive, disgorging stormtroopers who attempt to capture Grogu. Honoring their agreement, Fett, Shand, and the Mandalorian join forces to harry the advancing stormtroopers, inflicting heavy casualties.

Boba Fett retrieves his armor using it to wipe out many stormtroopers before firing a rocket that destroys the fleeing troop ships. Moff Gideon arrives in an Imperial light cruiser and destroys the Mandalorian’s ship Razor Crest from high overhead. Gideon sends out four Dark Troopers, who fly down and capture Grogu and take back to the cruiser. Fett and Shand agree to help the Mandalorian save Grogu to honor their debt. The Mandalorian seeks the now New Republic Marshal Cara Dune’s help in breaking out the criminal Mayfeld in order to track Gideon and rescue Grogu. Impressed with Grogu’s Force powers, Moff Gideon shows Grogu the Darksaber and has a stormtrooper stun and shackle him. After, Gideon informs Dr. Pershing that they have the donor.

THE MANDALORIAN: Give me the ball.

THE MANDALORIAN: Grogu, give me the ball. Come on.

THE MANDALORIAN: Okay, here we go.

THE MANDALORIAN: Dank farrik! Hey, no. I’m not mad at you. You did good. I just… When the nice lady said you had training, I just…

THE MANDALORIAN: We’re gonna find that place you belong and they’re gonna take real good care of you.

THE MANDALORIAN: This is Tython. That’s where we’re gonna try and find you a Jedi.

But you have to agree to go with them if they want you to. Understand? Plus, I can’t train you. You’re too powerful. Don’t you wanna learn more of that Jedi stuff?

I agreed to take you back to your own kind, so that’s what I need to do. You understand, right? Looks like that’s the magic rock I’m supposed to take you to down there.

THE MANDALORIAN: Sorry, buddy. I can’t land on the top. Too small. We’re gonna have to travel the last stretch with the windows down.

THE MANDALORIAN: Well, I guess this is it. Does this look Jedi to you? I guess you sit right here. Okay. Here we go.

THE MANDALORIAN: This is the seeing stone, are you seeing anything?

THE MANDALORIAN: Or are they supposed to see you? Maybe there’s some kind of control or something.

THE MANDALORIAN: Oh, come on, kid. Ahsoka told me all I had to do was get you here and you’d do the rest.

THE MANDALORIAN: Time’s up, kid. We gotta get out of here. We don’t have time for this. We got to get… (GRUNTS)

I’ll see if I can buy you some time.

Can you please hurry up?

THE MANDALORIAN: Are you Jedi? Or are you after the Child?

THE MANDALORIAN: If you want my armor, you’ll have to peel it off my dead body.

BOBA FETT: I don’t want your armor. I want my armor that you got from Cobb Vanth back on Tatooine. It belongs to me.

THE MANDALORIAN: Are you Mandalorian?

BOBA FETT: I’m a simple man making his way through the galaxy. Like my father before me.

THE MANDALORIAN: Did you take the Creed?

BOBA FETT: I give my allegiance to no one.

THE MANDALORIAN: The beskar belongs to the Mandalorians.

BOBA FETT: It was looted from us during the Purge. The armor was my father’s. Now it’s mine.

THE MANDALORIAN: What’s to stop me from dropping you right where you stand?

BOBA FETT: Because I have a sharpshooter up on that ridge with a locked scope that will unload by the time my body hits the ground.

THE MANDALORIAN: I’m the one wearing beskar. As soon as I see that muzzle flash, you’re both dead.

BOBA FETT: I didn’t mean she was going to shoot you. My friend’s locked onto that little companion of yours up on the henge.

SNIPER: And if you remember, I don’t miss.

FENNEC SHAND: You have a keen ear, Mando.

THE MANDALORIAN: You point that gun away from the kid or I’ll drop you both where you stand.

Let’s all put down our weapons, have a chat.

There’s no need for bloodshed.

Tell her to drop the gun.

After you put down the jetpack.

BOBA FETT: She was left for dead on the sands of Tatooine, as was I.

But fate sometimes steps in to rescue the wretched.

In my case, Boba Fett was that fate. And I am now in his service.

BOBA FETT: I want my armor back.

THE MANDALORIAN: It goes against the Mandalorian Creed.

BOBA FETT: The armor was given to my father, Jango, by your forebears. In exchange, I guarantee the safety of the Child, as well as your own. The bounty on your little friend has risen significantly. You can buy ten suits of armor for the price on its head. I’d say we’re offering a fair deal under the circumstances.

Up top. Move out!

STORMTROOPER 2: Flank left and from above.

Sir, there’s too much fire!

Flank them, you idiot!

Up top! Get up there!

STORMTROOPER: Get back! Get…

THE MANDALORIAN: That’s it, kid.

Just stay there. I’ll be back soon.

STORMTROOPER: Give yourselves up!

We don’t want you, we want the Child.

THE MANDALORIAN: Okay, let’s move in.

You can get out of here. I owe you from last time.

We have a deal.

BOBA FETT: I was aiming for the other one.

Better get to your ship.

THE MANDALORIAN: The kid!

Have the dark troopers been engaged?

FENNEC SHAND: They’ve got the baby.

Don’t let them get away!

I have a lock.

THE MANDALORIAN: Stop him.

I don’t want the Child hurt.

Do not harm the Child.

FENNEC SHAND: That can’t be.

The Outer Rim is under the jurisdiction of the New Republic.

I can see the Imperial cruiser with my own eyes.

THE MANDALORIAN: This is all that survived.

I want you to take a look at something. My chain code has been encoded in this armor for 25 years. You see, this is me. Boba Fett. This is my father, Jango Fett.

THE MANDALORIAN: Your father was a foundling.

BOBA FETT: Yes. He even fought in the Mandalorian Civil Wars.

THE MANDALORIAN: Then that armor belongs to you.

I appreciate its return.

THE MANDALORIAN: Then our deal is complete.

THE MANDALORIAN: How so?

We agreed in exchange for the return of my armor, we will ensure the safety of the Child.

THE MANDALORIAN: The Child’s gone.

Until he is returned to you safely, we are in your debt.

THE MANDALORIAN: Cara Dune, Marshal of the New Republic.

I wouldn’t go that far.

I need your help.

I need you to locate someone in the prison registry.

Let’s see what I can do.

Apprehended near the Dilestri system on a derelict prison ship.

Serving 50 years in the Karthon Chop Fields for springing a prisoner himself.

Accessory to the death of a New Republic officer.

What do you want with him?

I need to spring him to help me locate Moff Gideon’s light cruiser.

You know how I feel about the Empire.

But these stripes… mean there are rules I need to follow.

They have the kid.

You’ve gotten very good with that.

But it makes you oh-so sleepy.

Have you ever seen one of these?

You’re not ready to play with such things.

Liable to put an eye out with one of these.

Looks like you could use a nice, long sleep.

Put it in shackles.

When we come out of hyperspace, send an encrypted message to Dr. Pershing.

Let him know we have got our donor. 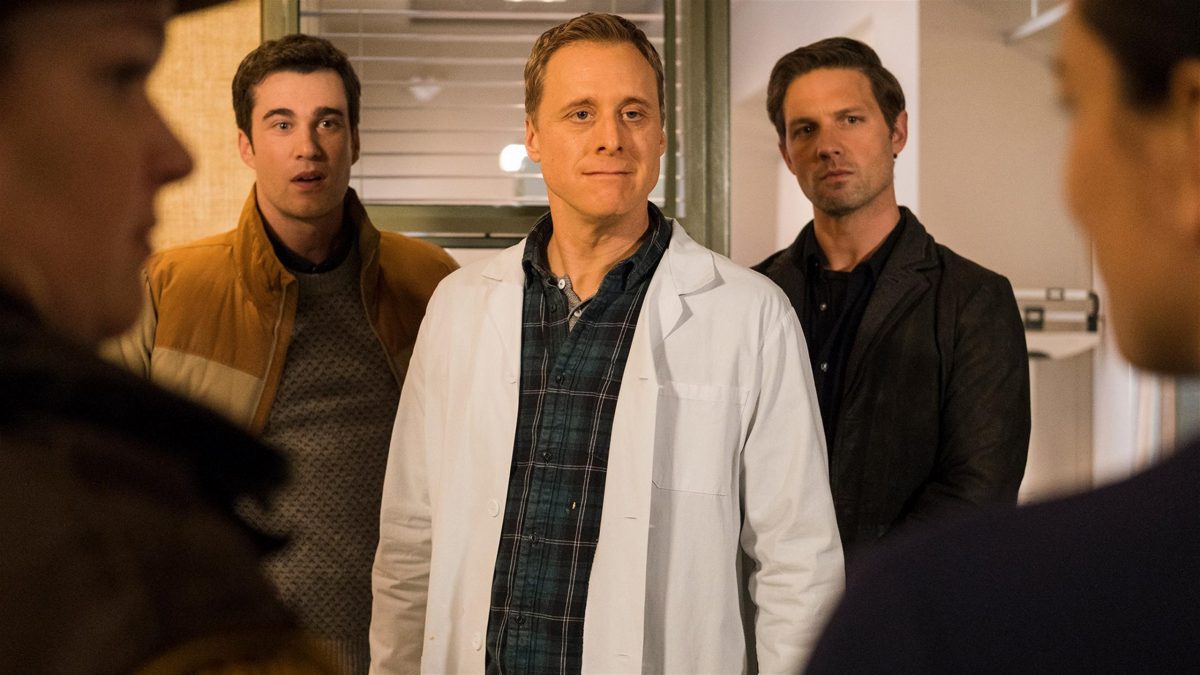 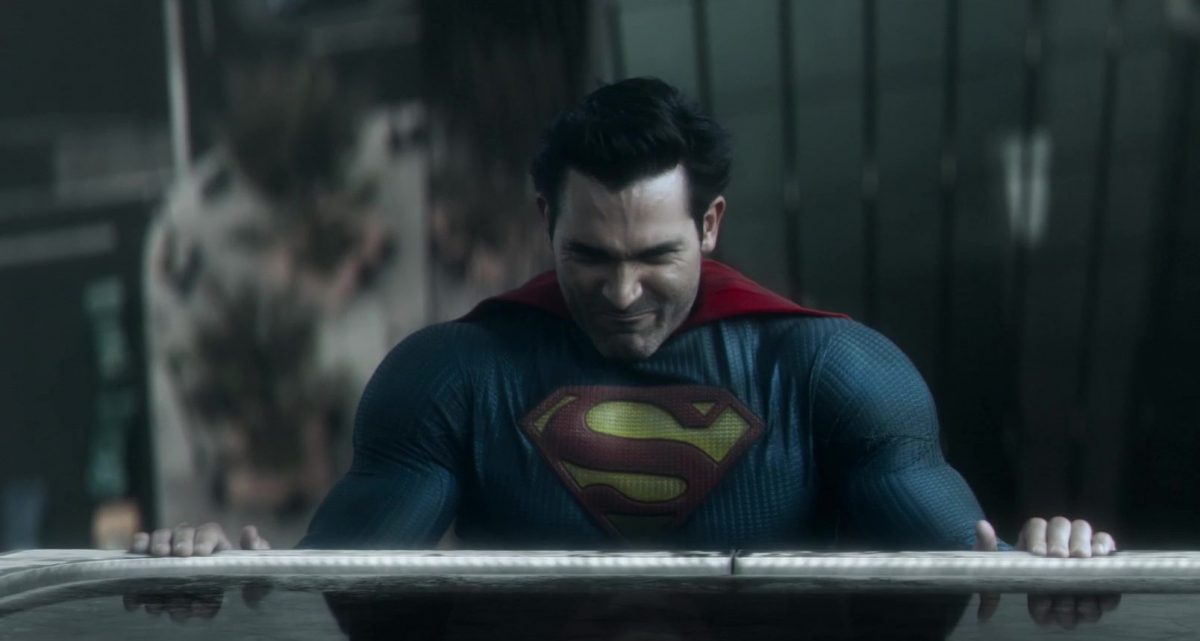 When adjusting to their new lives in Smallville, Lois and Clark make an important decision concerning one of their sons; tensions begin to rise between Lois and Morgan Edge; Lana Lang Cushing invites the Kent family over for a barbecue. 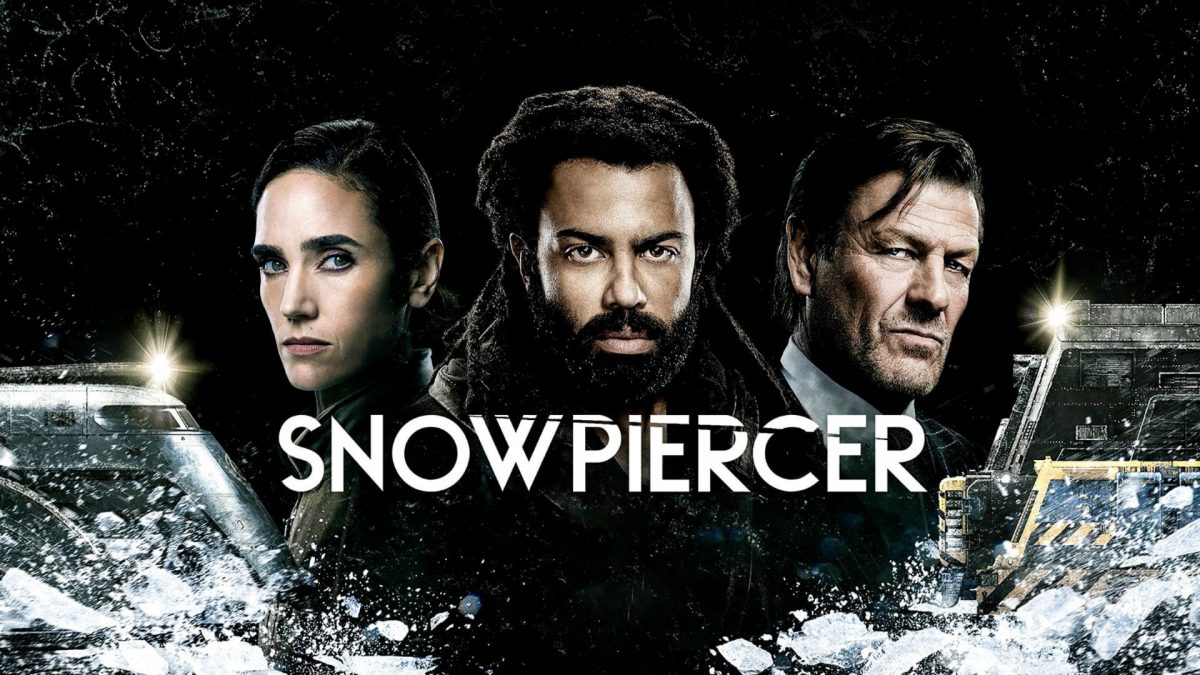 Melanie fights for survival in treacherous conditions, vying to do what others before her could not. 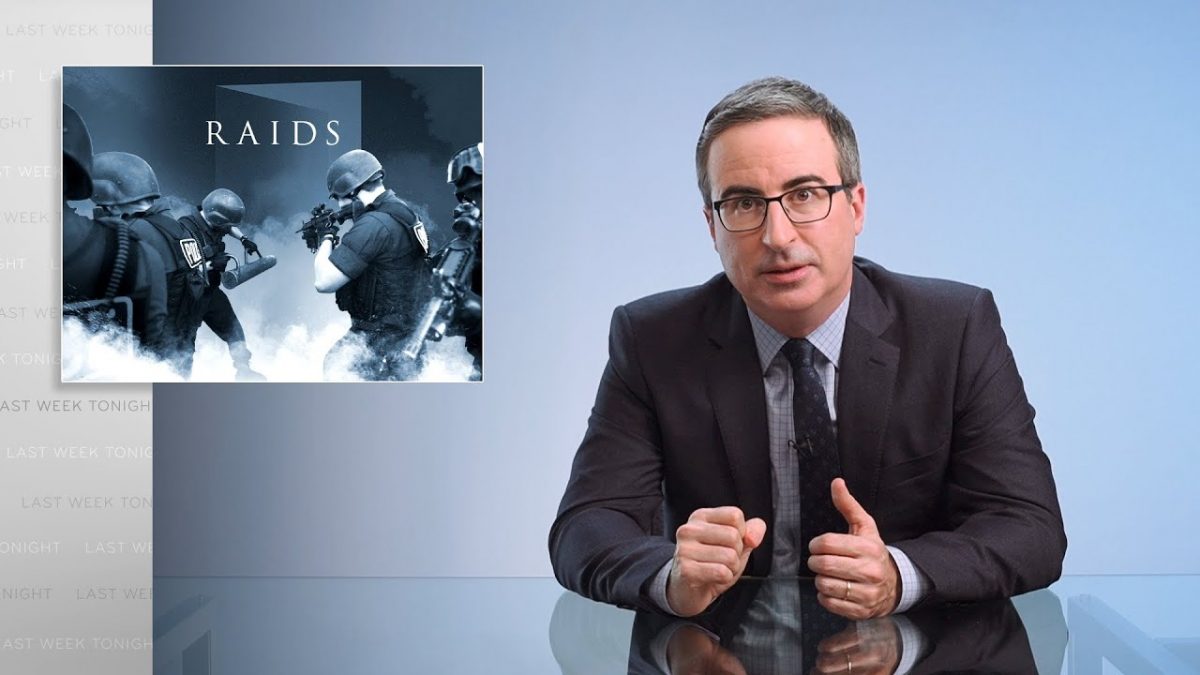 John Oliver explains how raids became a favorite tool of police, how few guardrails there are on their use, and what we should do about that.