In nine weeks of freedom the new nations of India and Pakistan had gone through a bloody slaughter that took 100,000 lives and from which 5,000,000 fled in history’s greatest mass migration. 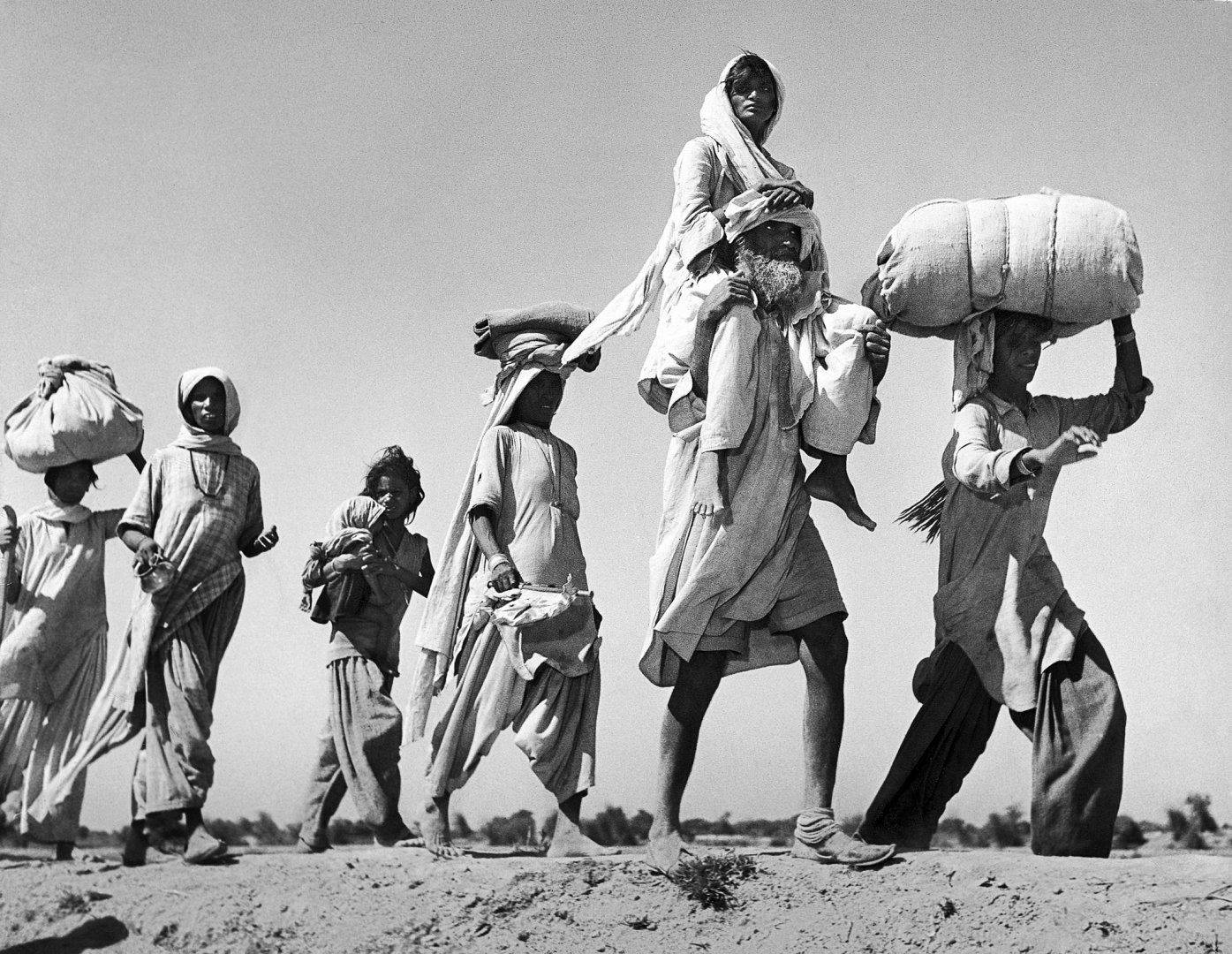 PHOTOGRAPHS FOR LIFE BY MARGARET BOURKE-WHITE

Last week the Indian earth trembled with the tread of millions of shuffling feet, and the Indian air, heavy with the smell of death, still echoed the screams of the dying. In nine weeks of freedom the new nations of India and Pakistan had gone through a bloody slaughter that took 100,000 lives and from which 5,000,000 fled in history’s greatest mass migration.

The ultimate terror began August 15, when the subcontinent was divided into Moslem Pakistan and predominantly Hindu India. It centered in the Punjab, which was split by the new boundary. The warlike, anti-Moslem Sikhs of Lahore found themselves a minority in Pakistan. The impoverished Moslems of Amritsar, the holy Sikh city, suddenly were residents of a Hindu India they feared. Spurred by religious fanaticism, fright and economic frustration, Sikhs, Moslems and Hindus fell upon each other with knives, swords, clubs and the torch.

For the millions there was only one solution: flight. Like the Children of Israel, but in nearly 10 times the numbers, they began their exodus over the footpaths and bullock-cart roads. Sometimes in small and sometimes in great caravans, 2,750,000 Moslems plodded into West Punjab and 2,700,000 Sikhs and Hindus crossed the new frontier to the east. The article contains Margaret Bourke-White’s photographs of the terrible odyssey. 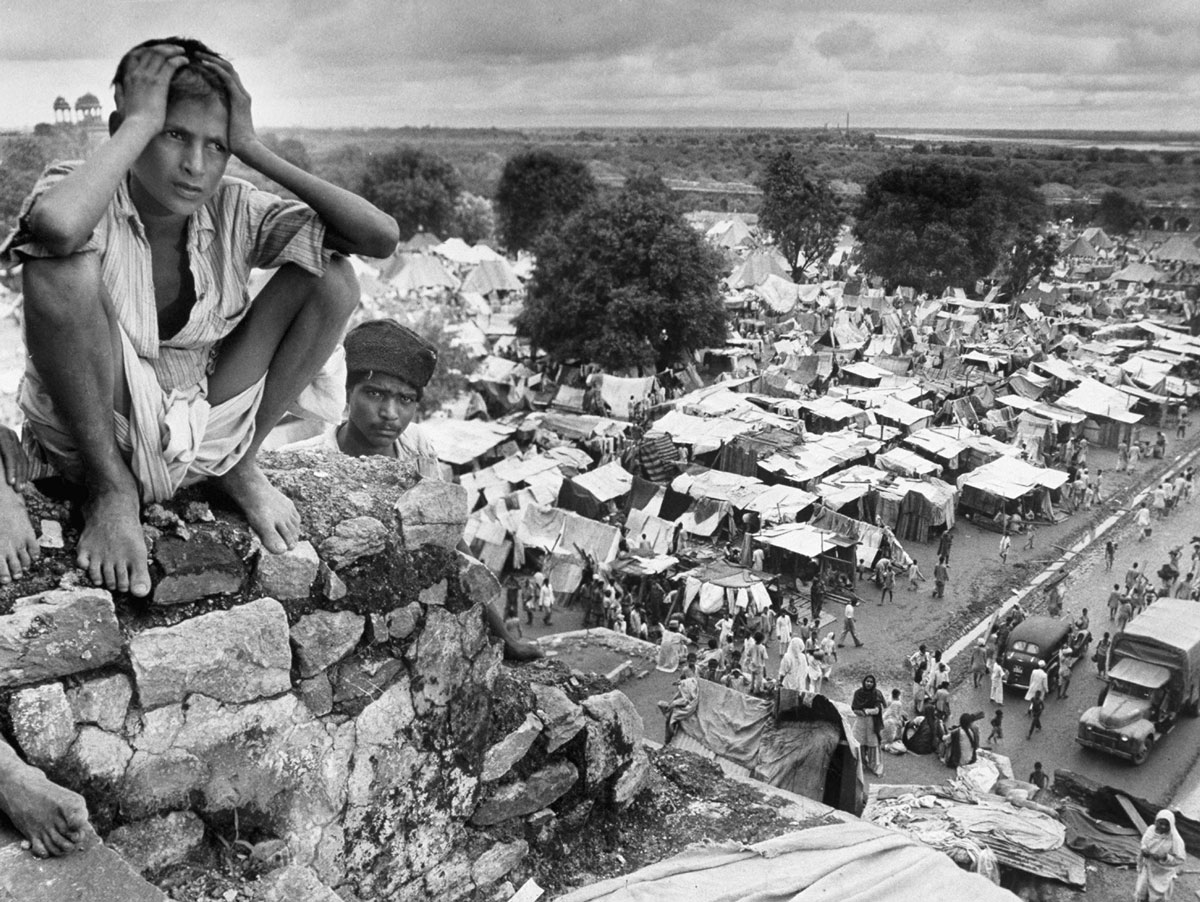 MISERY OF THE RISPOSSESSED is reflected in the face of this Moslem boy, perched on the wall of the Purana Qila fortress in New Delhi. Below him thousands of his unhappy fellows, who have fled their homes in terror, are trying to  survive until they can organize a convoy for the long march to Pakistan. In their squalid city of tents and lean-tos they have almost no room to sleep and little to eat. They are surrounded by filth and many will die without ever leaving camp.

They are unspeakably dirty, crowded and sorrow-ridden

To escape the slaughter in unfriendly cities and at the same time gather the strength of numbers for the long migration, Moslems in India and Sikhs and Hindus in Pakistan have moved into ancient fortresses like New Delhi’s Purana Qila. These primitive camps are squalid concentrations of disease and sorrow. Yet they are distinguished by a color and vitality that cut through the stench and the wailing of the bereaved.

In the Purana Qila fort more than 60,000 Moslems sleep on dirt ledges, under crazy lean-tos made of a bit of canvas or a dirty blanket. There are no toilets or sewers. For many the only food is a daily ration of four chappattis (disks of unleavened bread). Day and night there is movement—new refugees come in carrying some of their possessions on their heads in burlap bags, and old refugees search again and again for missing relatives or frantically scurry for food and water.

Almost all have lost parents, husbands, wives or children. Some have been wounded before they reached the camp. Behind them lie abandoned homes and their shattered families. Ahead, if they survive the camp’s rigors, lies only the fearful prospect of a long journey beset by danger and greater hardships, and a future whose shape they cannot even guess at.

MOSQUE WITHIN FORT also is packed with homeless Moslems. The great dome provides a measure of shelter against the elements for some of the refugees. 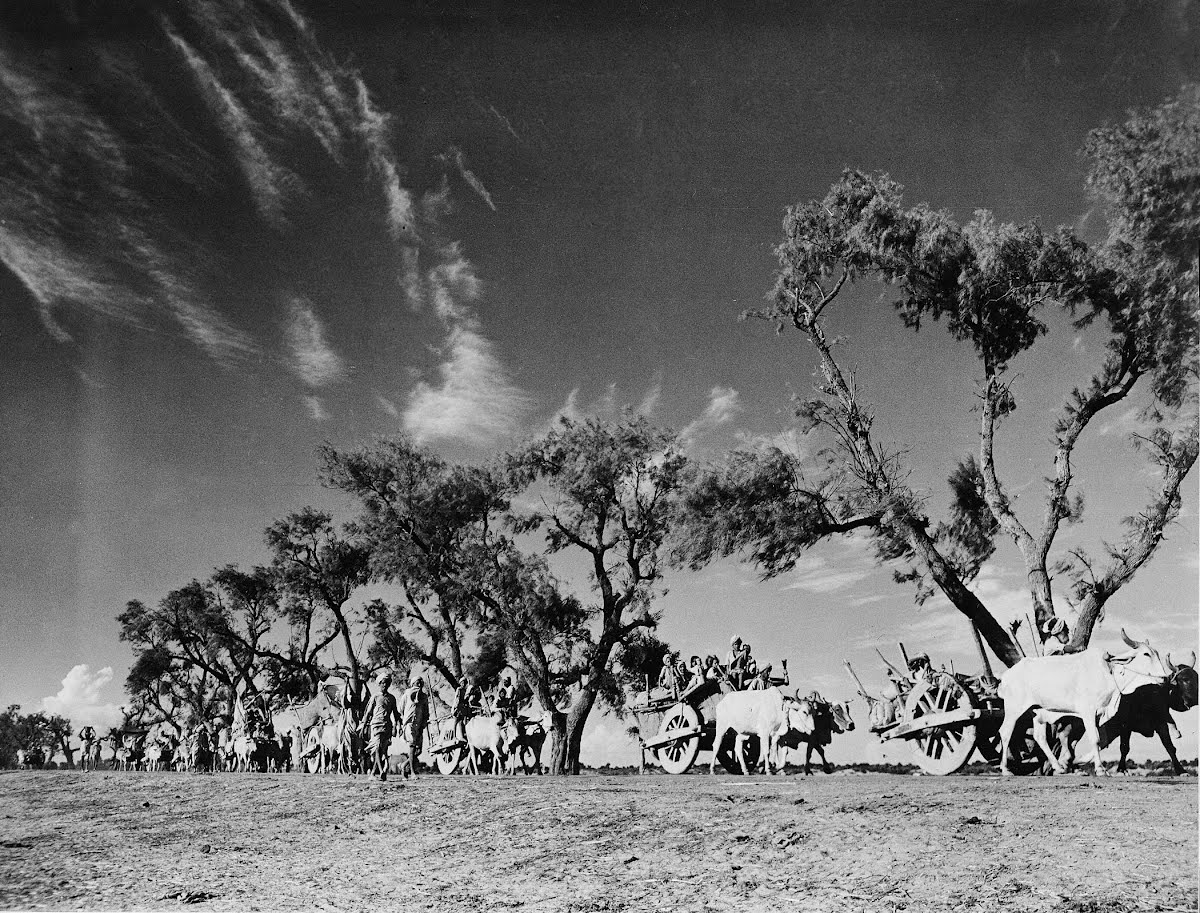 THE EMIGRANT TRAINS of crude wooden carts drawn by bullocks creak across the barren land of the Punjab all day long. In this convoy, starkly silhouetted against the vivid Indian sky, are 45,000 uprooted Sikhs on their way to the Ferozepore and Ludhiana districts of the eastern Punjab. Unlike the U.S. wagon-train pioneers, hopefully en route to a new land, these migrants have little to look forward to and are losing everything that they cannot carry with them. Despite the presence of an escort of Gurkha soldiers, thousands of stinking bodies along the road constantly remind the travelers that they may never reach safety. 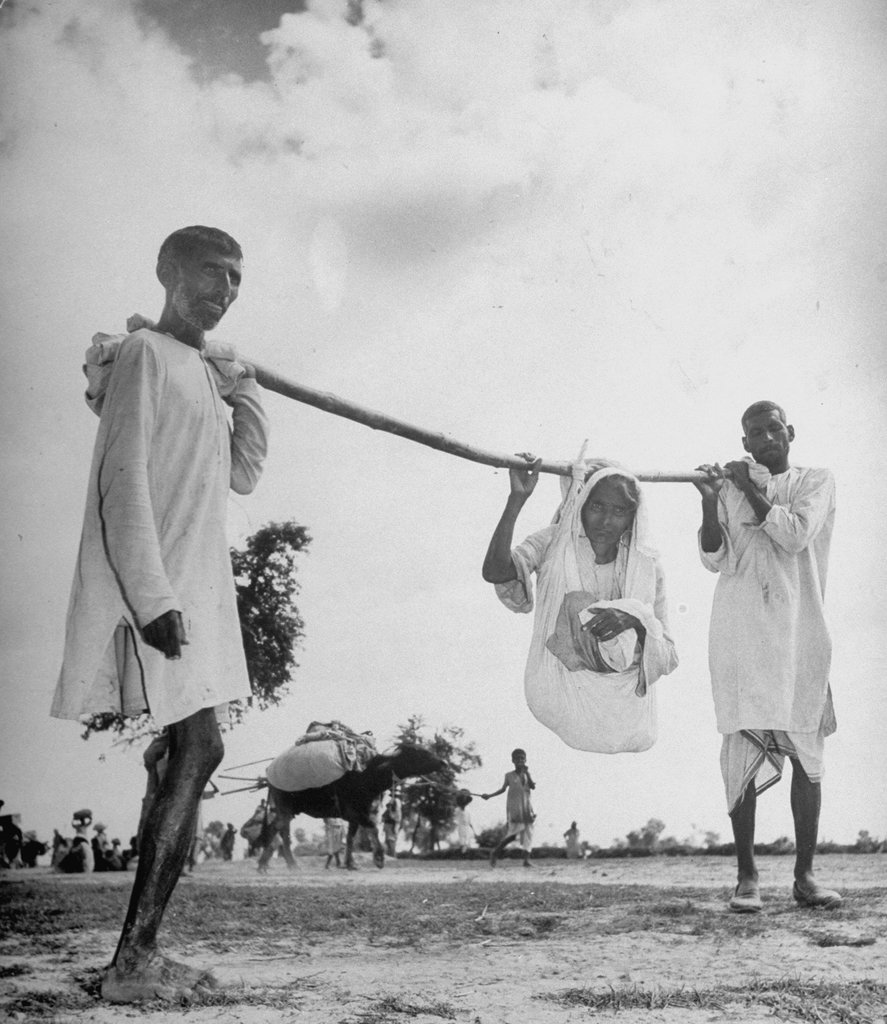 THIS STRANGE LITTER was devised to carry aged and exhausted Moslem woman, sitting in a sheet with legs drawn up. The bamboo pole is supported by her brother-in-law and her son. When this photograph was made, the family had been four days without food, but men were managing to keep up with convoy. 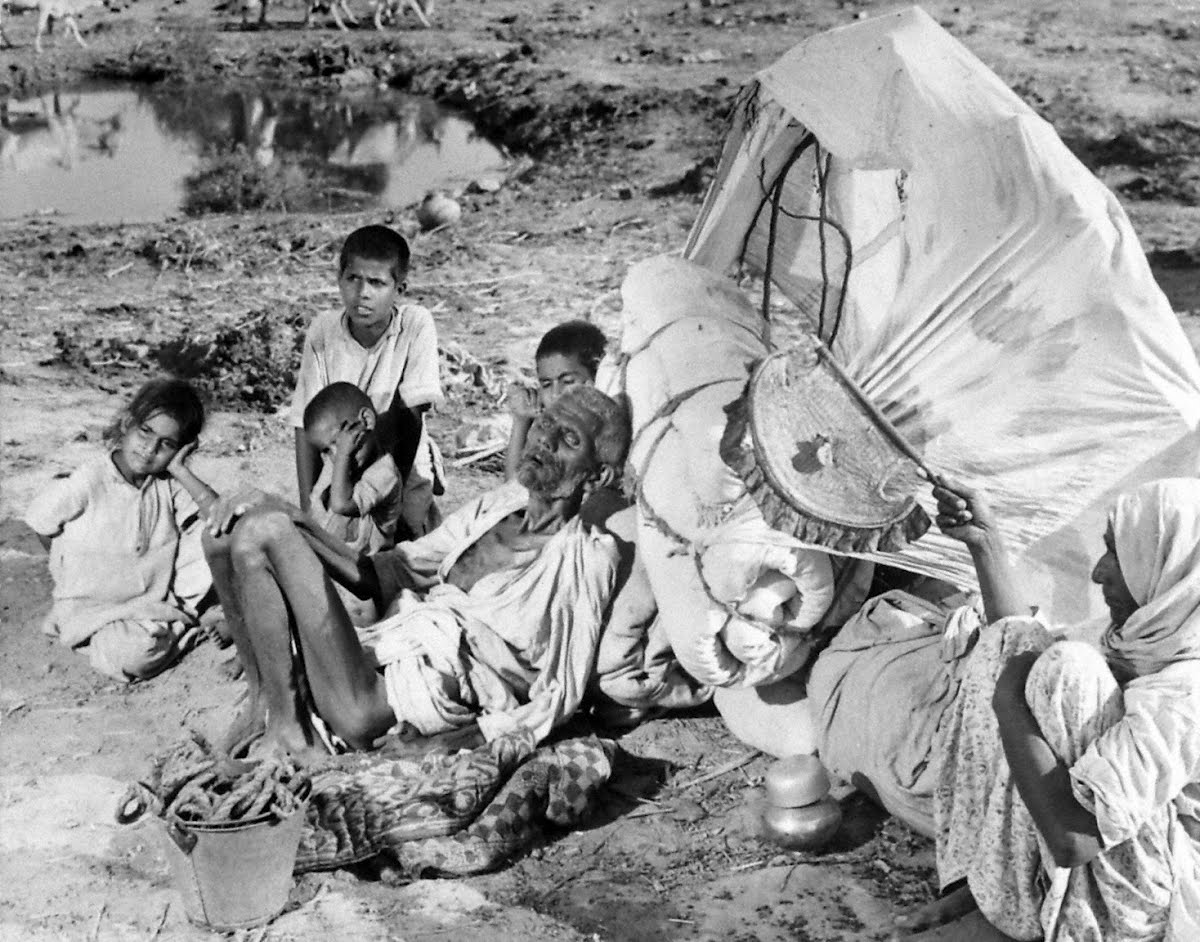 ABANDONED AT ROADSIDE because they were unable to keep up with caravan, this aged Moslem couple and their four grandchildren have little hope of survival. The children’s father was killed by Sikhs. Their mother was stricken with cholera and sent ahead by truck in the hope that she might find medical care.

They race against murder, starvation and exhaustion

From the temporary refugee camps on both sides of the border the caravans have streamed out in bullock carts and on foot. Sometimes the groups have been relatively small, considering the dangers they faced; sometimes they have formed unwieldy columns of as many as 400,000 people. Large or small, Moslem or Hindu-Sikh, they have shared the common denominators of misery and fear. In many cases the refugees have carried only their clothing and a few pounds of food. Moving at the slow pace of their bullocks, a torturous 10 to 12 miles a day, they have had to forage or starve. Often the old and the very young have dropped of hunger and exhaustion. Some of them were lucky enough to have relatives who could aid them. But others have been abandoned where they fell and left alone and helpless in a hostile land.

These hardships of the trail, common to most migrations, have been dreadfully compounded by disease and mass murder. Cholera has flourished in the filthy camps and accompanied the travelers on the road. Armed bands of Moslem, Sikh and Hindu zealots have preyed upon each other’s convoys, and sometimes caravans have been massacred in miniature wars with groups of refugees bound in the opposite direction.

The scope of the Indian migration, as well as its hardships, is almost beyond the imagination. It involves as many people as if all the residents of San Francisco began moving to Los Angeles at the same time that all Los Angeles residents started out for San Francisco. Comparatively few of the migrants have been able to go by train, and many of the trains have been attacked. The railroads, like the other roads, are lined with the dead. 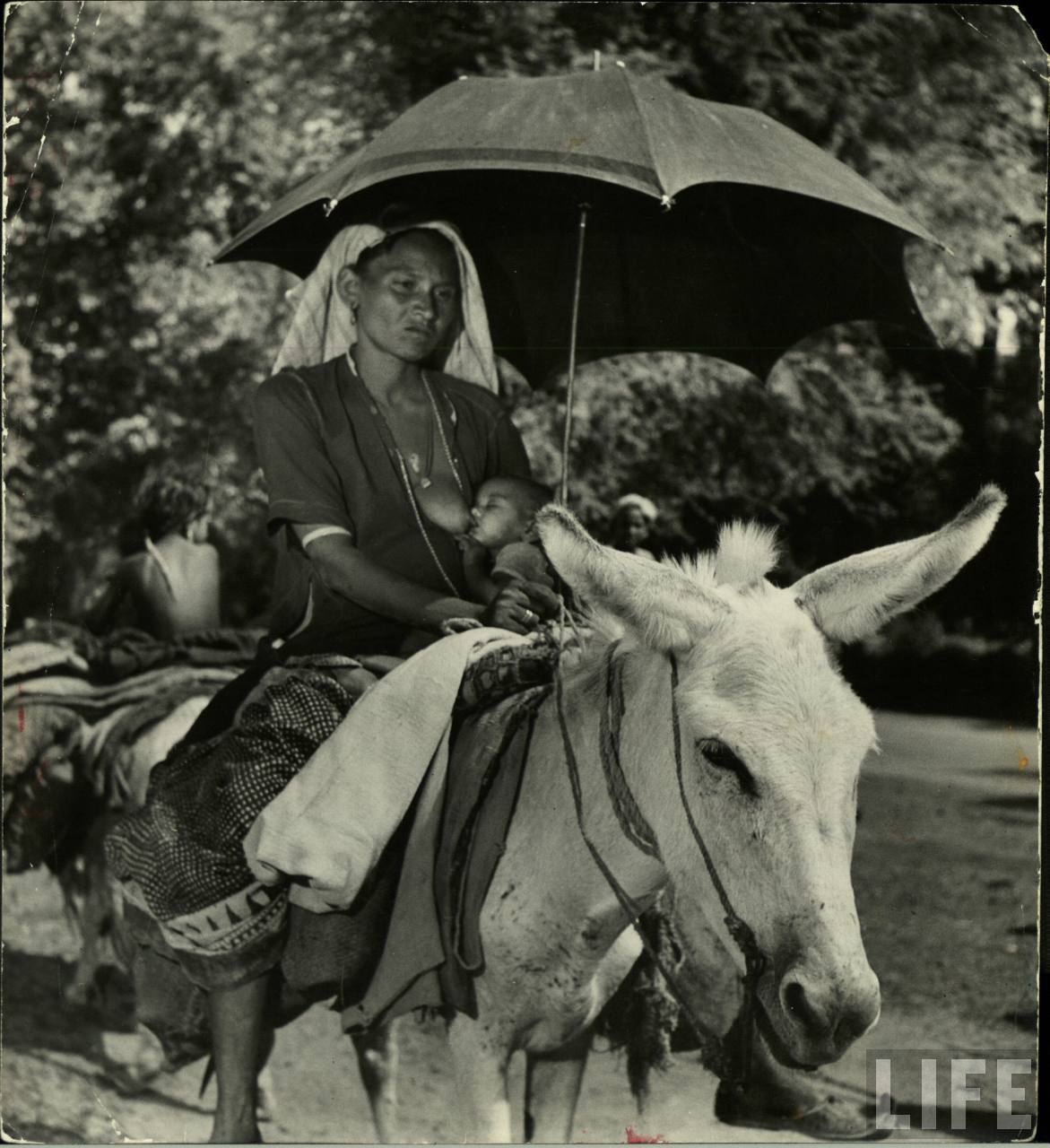 MOTHER AND CHILD are part of caravan 25 days on road. More fortunate than most, woman can ride and has an umbrella for shade as she feeds her baby. 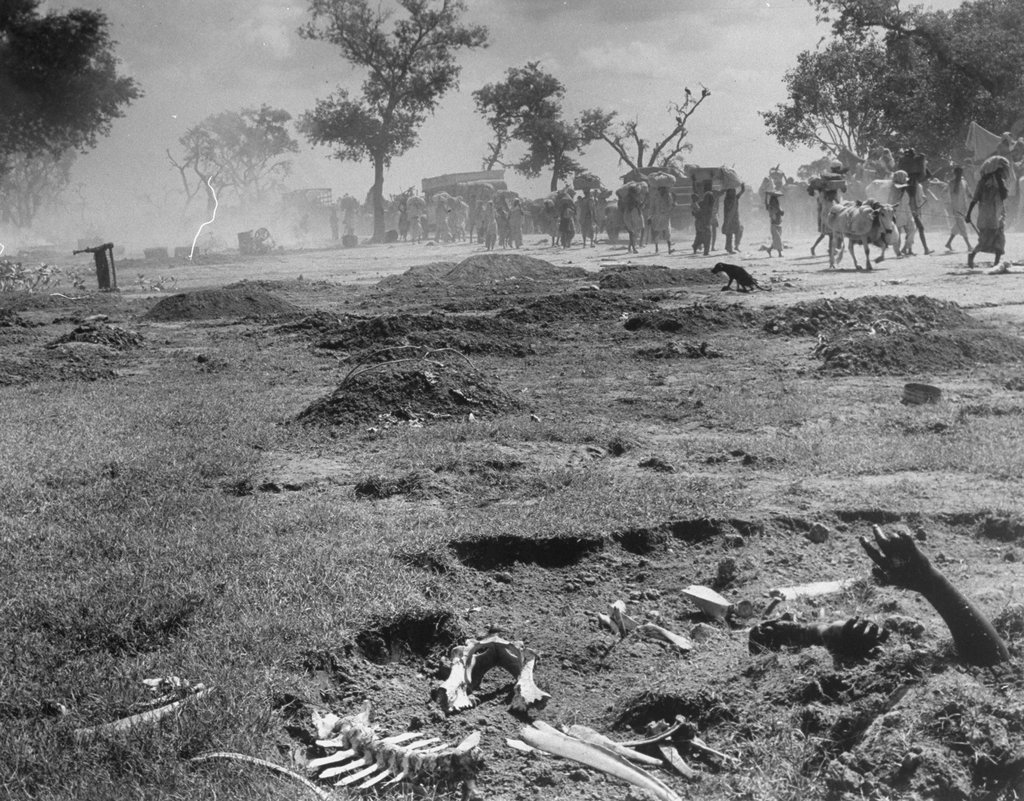 THE DEAD from a previous Moslem convoy lie rotting at the roadside next to the whitened hones of their buffaloes and bullocks, while another convoy marches past apathetically on the way from East to West Punjab. Here, marked by the bones and bodies, was the scene of a bloody attack by the Sikhs.

THE VULTURES descend to tear at the bodies of four Moslem pilgrims who were murdered and left lying in a Hooded field only 6 miles outside of Amritsar. Death has “become so commonplace in this area that the harried emigrants seldom even turn to look at the spectacle of vultures or dogs feasting on human flesh.

I suspect that James Dickey, who adapted his best-selling novel Deliverance for the screen, and John Boorman, who directed it, are trying to tell us something fairly important by subjecting four sober, settled, middle-class gentlemen in their thirties to a series of wilderness trials that test their courage and cunning in a manner we usually associate with the initiation of adolescents into primitive tribes.